Getting Ready For Hunting Season

With antlers and plants in full fledge growth mode, this time of year is one of my favorites. Mostly due to the fact that we finally get to see some velvet covered antlers. It’s also the time of year when those big bucks are beginning to be easier to pattern using trail cameras, which means it’s time to start getting ready for hunting season.

In the southeast, I really like to start getting my cameras out in mid-late June. By this time, the soybeans and peas are up and growing, water sources are being hit more frequently, and it’s much easier to predict the patterns of mature bucks. 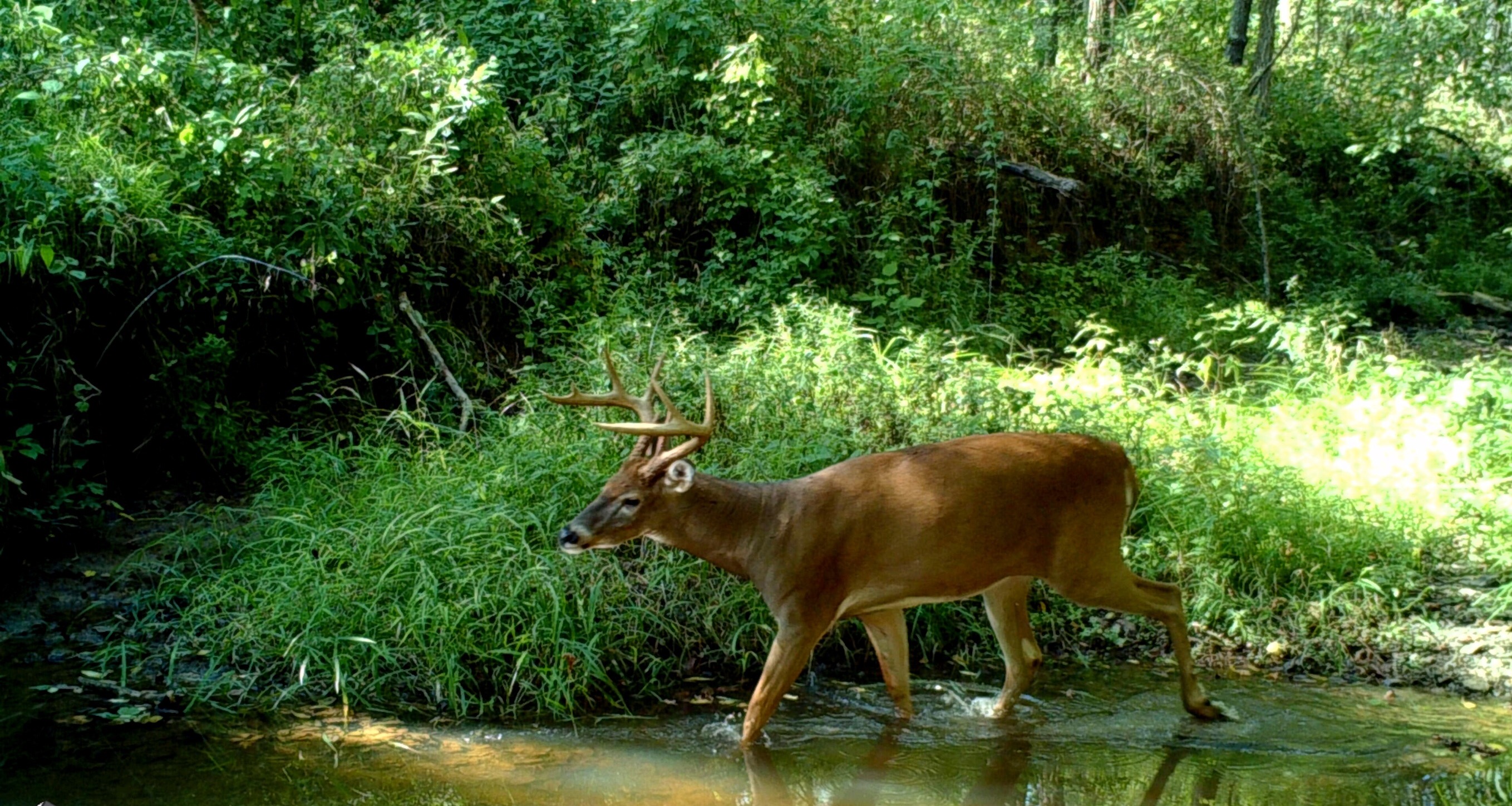 Due to the heat, a whitetail’s movement is going to be much more limited vs. the cooler months of the year. Food, water, and bed are going to consist of the majority of a whitetails summer movement. So finding those frequently visited water holes, and knowing the summer food sources in your area are going to be summer deef inventory game changers while getting ready for hunting season.

On my property, I will concentrate most of my trail camera efforts on bean fields, travel routes to and from said bean fields, and secluded watering holes.

I often hear people say that they have ample creeks on their property, so the deer can take a drink in multiple different locations.

While this is true, just like feeding, a deer will need to feel safe wherever they choose to stop for a drink. Often times, those little, secluded water holes will be frequented by mature bucks much more often than the creek that the doe groups are using. I get more trail camera pictures of bucks crossing creeks than I do of them actually drinking out of them. So take that as you may.

Due to the high water content in the foliage this time of year, it’s a great time to freshen up those mineral sights as well. The salt content in products like Trophy Rock and other similar mineral supplementation aids the whitetail burning off excess moisture. This is vital in proper kidney function. Therefore, mineral sites are another great location for your trail cameras when getting ready for hunting season this time of year. 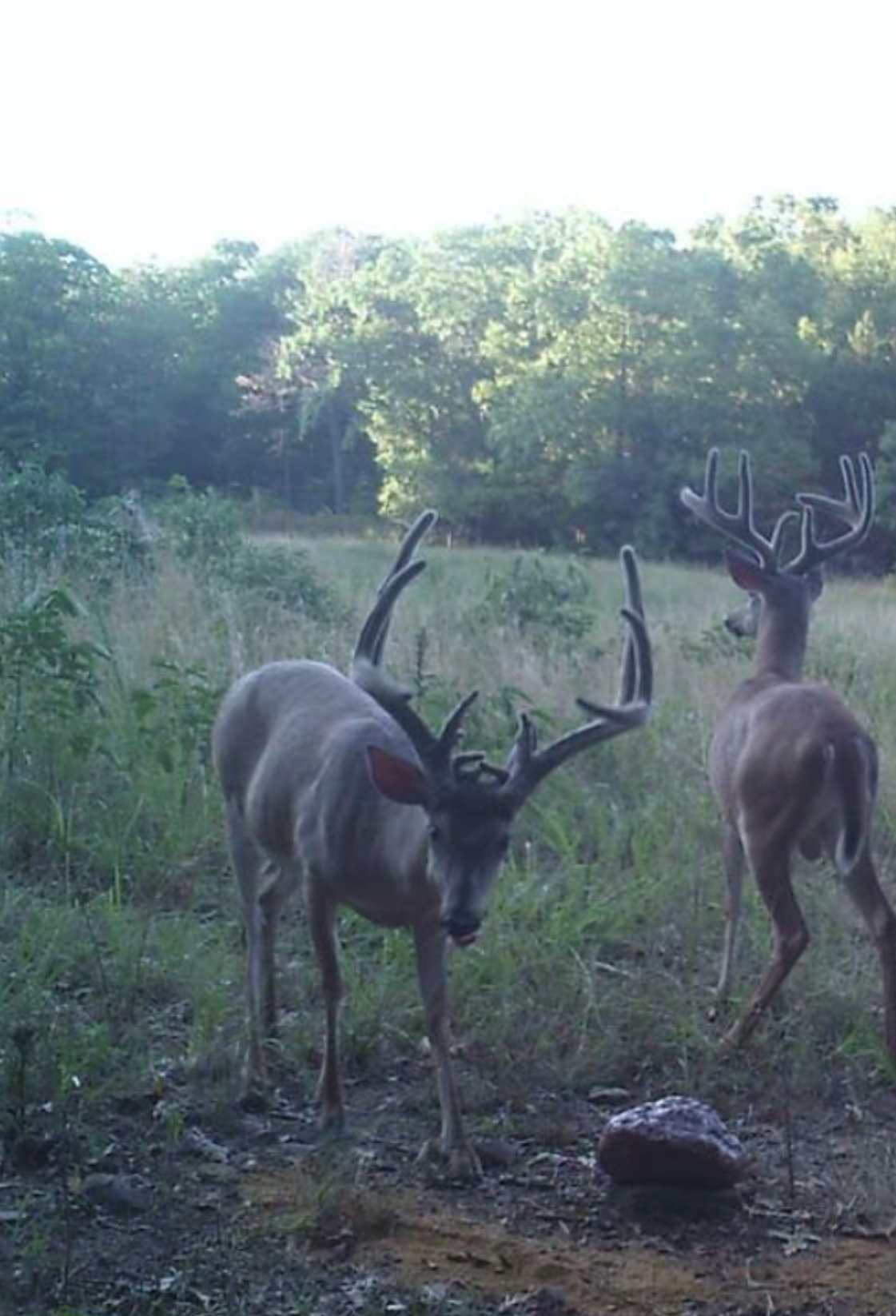 Be sure to place trail cameras at mineral sites while getting ready for hunting season during the summer months.

By the third week of June, my corn has begun to reach the stage of growth in which its time to give it a kick in the pants, so to speak. The largest portion of nitrogen taken up by corn occurs during the eighth leaf to tasseling development stages. Therefore, applying nitrogen before the V8 stage is best. Personally, when getting ready for hunting season, I do so around the V5 stage in our region and have yet to see yield loss due to nitrogen stress.

Whenever possible, I like to side-dress my corn with nitrogen, aside from broadcasting it into the stand. This will reduce volatilization of urea and protect the crop from foliar damage. Volatilization occurs when nitrogen is in the organic form or urea. When this happens, the nitrogen is changed to ammonia gas and lost into the atmosphere.

When side dressing or injecting nitrogen into the soil is not possible while getting ready for hunting season, a broadcast application is the next best option. Urea granules will be your best product in this scenario and will have less impact on the foliage vs. ammonia nitrates and ammonia sulfates.

When applying urea through broadcast applications, it’s best to do so when conditions are dry. Being that urea is soluble, application while leaf tissue is wet from a morning dew, or rain will cause the pearl to stick to the leaf tissue and potentially burn the foliage.

With that said, it is very important that you time the fertilization with a coming rain; ideally a rain within 2-3 days. If urea is not incorporated into the soil via injection, disking, or rain, you risk losing into the atmosphere through volatilization, which can also cause foliar damage.

I know getting ready for hunting season is our main focus but for those of you interested in the deep science behind this: Like I previously mentioned, if urea is left exposed to the atmosphere by laying on the surface of the soil, it converts to a gaseous ammonia and is lost to the atmosphere. As we know, when it comes to atoms, opposites attract. Therefore, because nitrate is negatively charged, like most soil particles, it is susceptible to leaching in times of heavy rains in well-drained soils. However, urea that is incorporated into the soil, converts to ammonium N which is positively charged. Therefore, it is absorbed by soil particles, thus eliminating leaching.

If supplemental nitrogen is needed after the V8 stage, it will most likely need to be done with high clearance equipment to keep from damaging the standing corn. So fertilization before this stage is very important, should you not have access to such equipment.

When side dressing corn, I typically use a rate of a ¼ pound of nitrogen, per 100sqft. When broadcasting urea, I will use three, 50-pound bags of urea per acre. This is equivalent to 69lbs. of nitrogen per acre. Of course, your exact rates will be dependent on your soil analysis, which I recommend taking before you tackle any food plot project while getting ready for hunting season.

For those of you that already have the bow season itch, just hang in there, you’re not alone! 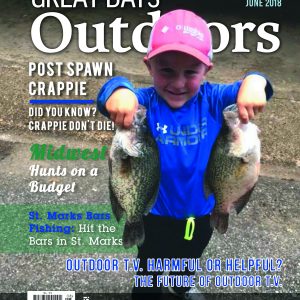 This article first appeared in the June 2018 print issue of Great Days Outdoors Magazine. For more great hunting and fishing content for the deep South, subscribe to Great Days Outdoors print and digital editions or click the image to download this issue.