Of all the small sea creatures hidden under the white sand of the Emerald Coast beaches, Beach Ghost Shrimp Callichirus islagrande may well be about the most important and least recognized for surf and pier fishermen. Many anglers are familiar with using penaeid shrimp or even mole crabs (sand fleas) as fish bait. But beach ghost shrimp often make up a larger percentage of natural food items for pompano, drum, sheepshead and other fish living in the surf zone. They are not commonly seen because fish seem to snap them up faster than $20 bills in a Walmart parking lot. But pieces of ghost shrimp are often found in the stomachs of these fish at the cleaning table, proving how often they are eaten. And you can get to these delectable little creatures with a simple to build device we like to call a ghost shrimp pump. 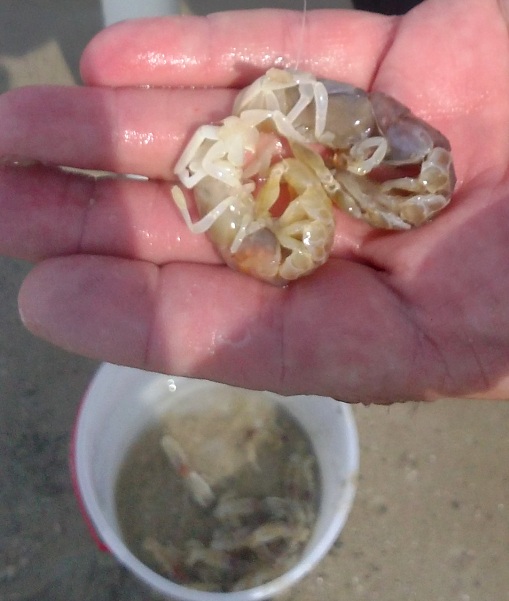 This shy, soft crustacean can burrow several feet down into the sandy bottom for protection, and to find its own food as well as a mate. Since they are not commonly available for sale, about the only recourse for anglers looking to use them as bait is to dig down after them. The “ghost shrimp pump” or “slurp gun” is the perfect tool to perform this labor-intensive task. The practice of using a suction pump device to extract ghost shrimp seems to have originated in Australia where similar species are referred to as “yabbies”. Some years later, use of the pump was adopted in the United States as expensive imports. Then about 10 years ago interest picked up and anglers began clamoring to find out how to make their own pumps. They are fairly simple devices, assembled from about $15 worth of parts available at most hardware or home improvement stores. Plus, some coastal bait shops sell them already assembled for around $35.

Building a ghost shrimp pump yourself is easy and only takes about an hour. It will reward you not only for the modest amount of money saved but by catching a virtually unlimited supply of your own fishing bait while using something made by your own hands. Plus, this allows room for any personal customization you might be inspired to adapt to creating your own version. Your neighborhood plumbing supply or building store should have the necessary parts to construct your own pump. 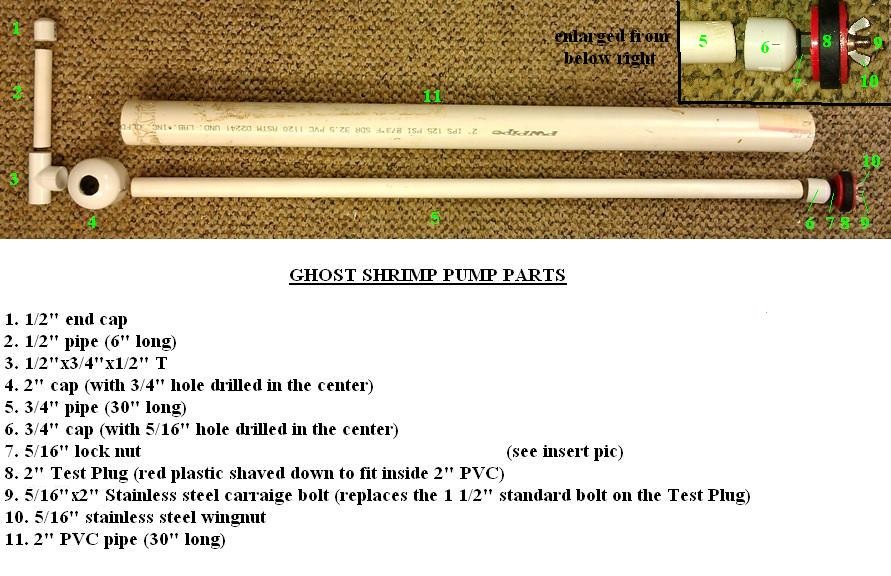 All the pieces of a ghost shrimp pump labeled with assembly instructions. Photo by David Thornton.

A 2” PVC Test Plug (the red plastic will need to be ground down to fit inside the 2” tube).

A small can of PVC ‘primer’ and PVC cement (glue).

NOTE: the long piece of 3/4” pipe should be no longer than the length of the 2” pipe.

Glue the longer 3/4” pipe into the bottom of the handle elbow (or T).

Thread the washer and lock nut onto the 5/16” bolt and tighten (be careful not to over tighten).

Place the test plug on the end of the 5/16″ bolt and the wingnut after it (tighten by hand only).

The 2” pipe should slide over the test plug and into the end cap suspended on the handle.

I prefer to just push the long outer tube into the end cap near the handle instead of gluing it. This allows it to be quickly disassembled after use to rinse away all sand and saltwater. Also, I add a drop of 3-In-One oil to the end of the bolt and loosen the wing nut to allow the rubber O-ring to relax until needed again. The amount of pressure the wingnut exerts on the O-ring will squeeze it outward against the sides of the tube. So when the handle is pulled upward, it creates a vacuum which draws water and sand (and hopefully a ghost shrimp) up into the tube. The contents are dispelled off to one side and examined for a ghost shrimp simply by pushing the handle back down in the tube.

To make your own Ghost Shrimp Pump, fill out the form below to receive the blueprints.

Hold the top of the ghost shrimp pump in one hand and the handle in the other. As you draw up on the handle with one arm, try to press the tube down into the sand by extending your other arm downward. This exercise will maximize the depth you are excavating with each ‘slurp’. After squirting the contents off to one side, quickly reinsert the end of the tube into the depression you just created and repeat the pumping process. The accessible shrimp are usually near the top of their burrow. So after two to four ‘pumps’ you should have excavated down about 2 to 2 ½ feet. If you haven’t seen a shrimp by then your odds of finding one in that hole seem to decrease. So it’s probably best to just move on to the next burrow. 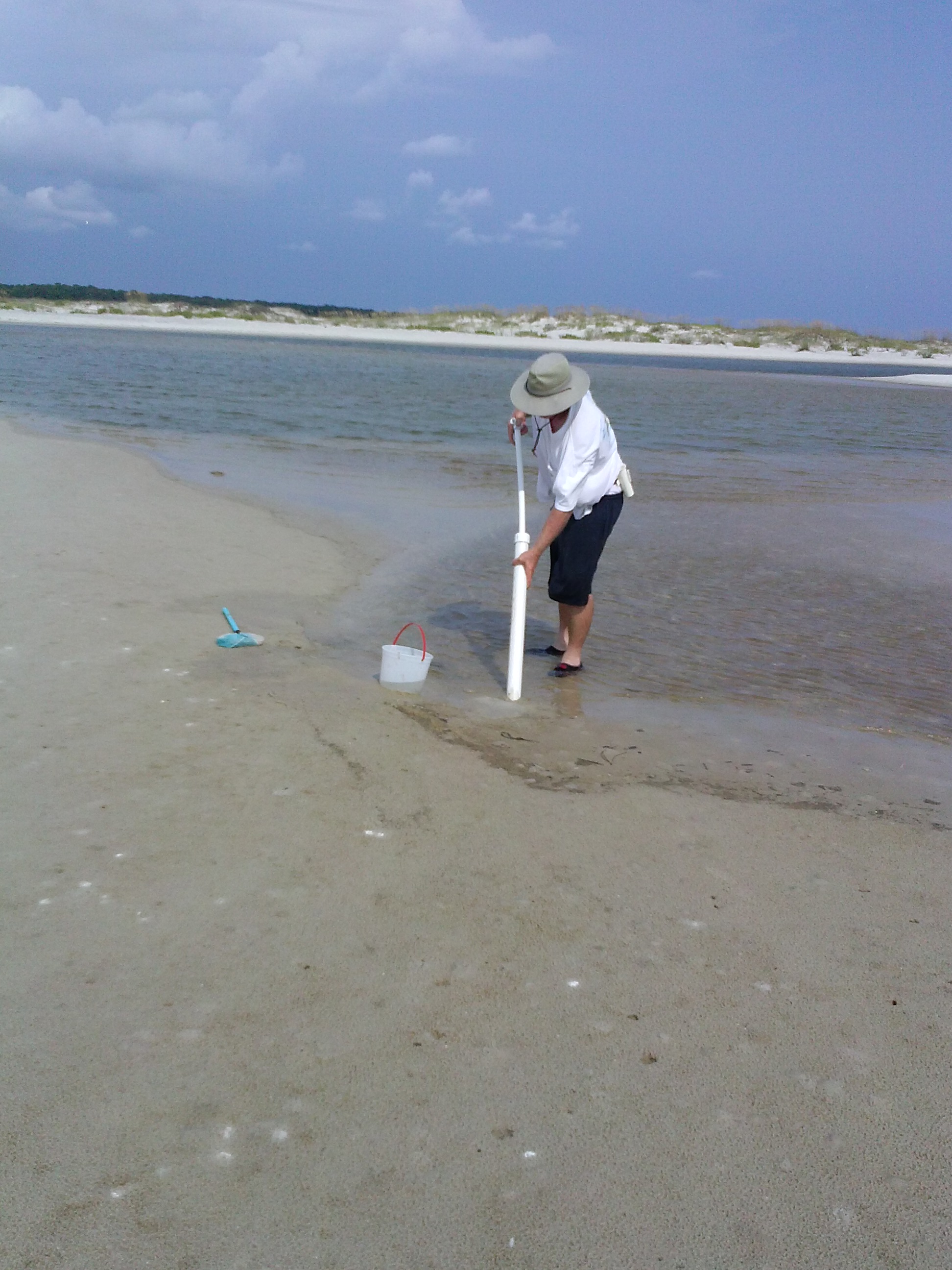 Sometimes you can get multiple ghost shrimp from a single hole. Photo provided by David Thornton.

I seem to have the best luck with the ghost shrimp pump on a dead low tide, just as the tide starts back in, but not always. Look for the burrows (or simply ‘open holes’ in the bottom) with a bit of sandy water discharging from them. That is usually indicative of a ghost shrimp which may be near the surface and actively digging. Once you get the rhythm of what to look for and how deep to go, it gets a bit easier. Usually bait gathering sessions last about an hour, to get 30-50 shrimp. But I like to take frequent breaks for rest or check my fishing rigs. Often I just gather a few ghost shrimp to begin fishing with and then make several excursions nearby to get more as needed. They store well in a shallow pail or even a Ziploc bag in the cooler. Leftover ghost shrimp can be frozen (about 20 or so) in a bait cup or small Ziploc bag filled with seawater (not tap water). They will be a bit ‘mushy’ when thawed, but still, make great bait or even chum.

Just about anyone can do this — even children. But it is a very strenuous workout. So be careful using muscles you may not ordinarily use, or use for long periods, especially in cold weather. Still, slurping the sand with your ghost shrimp pump is a great way to get outside even in cold weather and at least get some fantastic fishing bait. Good luck!