Alabama has been extremely fortunate to acquire some large tracts of land for the public-lands program. Chuck Sykes, the Director of Wildlife and Freshwater Fisheries in the Alabama Department of Conservation and Natural Resources (DCNR), realized the growing demand by public land deer and turkey hunters to have opportunities to hunt lands intensively managed for wildlife, like owners manage their private lands. So, as new public lands became available to be purchased by the Game & Fish Division, this division implemented land-management practices on these Special Opportunity Areas (SOAs) to improve them for maximum wildlife production and older-age-class animals. The DCNR also limited access to these lands through using a drawing system similar to that of the hunting permit trophy areas in western states. These strategies when used can help you improve the land you hunt, if you own the land or have the landowner’s permission to implement this habitat management plan.

“The DCNR does road maintenance by thinning pines and other brush back to 20 – 30 feet on each side of a road,” Sykes reports. “Then more sun can hit the roads and cause them to dry-out quicker than if the roads are shaded. We create ditches on the sides of the roads and crown the roads to help drain water off the roads. These operations reduce the amount of time we have to spend maintaining our roads on the state’s WMAs and SOAs. We also make a clearing from the ditch on the side of the road up to the road that we can disc to create habitat where turkey poults and quail chicks can feed and grow. Another need that wildlife has, especially turkeys and quail, is grit for their craws. So, we put gravel alongside the roads, the birds eat that gravel, and it grinds up the food in their craws.” 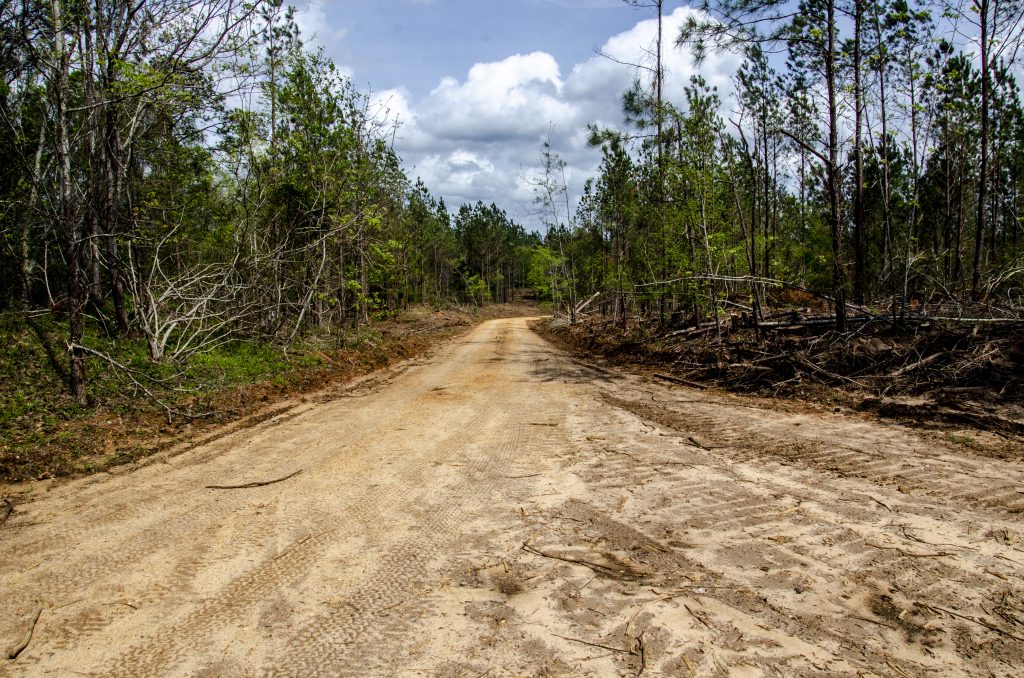 Alabama’s DCNR does road maintenance by thinning pines and other bushes back 20-30 feet on each side of the road to let more sunlight in and then discs that area to create habitat where turkey poults and quail chicks can feed and grow.

To have more turkeys and deer, you must control predator populations on the lands you hunt. You can get help from the state, since anyone who wants to buy a trapping permit can trap fur bearers on public lands. Some of the worst predators, coons, coyotes, possums, skunks, foxes  and bobcats especially, impact turkeys and ground-nesting birds.

“Don’t overlook the fact that feral hogs also eat turkey eggs, destroy nests and kill turkey poults and deer fawns,” Sykes explained.  “At Portland Landing SOA, wildlife biologists and crews have trapped over 600 wild hogs in one year. However, trapping is very labor-intensive and time-consuming. Predator removal is much like cutting grass. You have to do it weekly or bi-weekly every year to positively impact wildlife. If I were a private landowner, I’d trap raccoons and possums just before March to reduce those predator numbers before turkeys start nesting. To increase my deer herd, I’d trap coyotes and bobcats in August when fawns are just being born.” 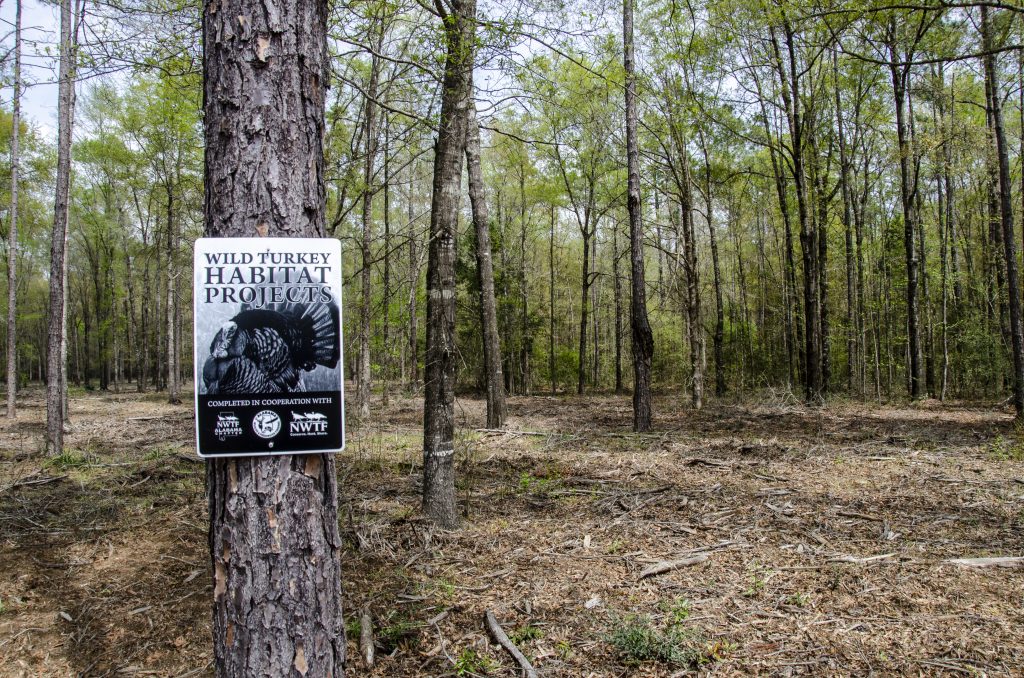 Coyotes and other predators do negatively impact turkeys, quail, songbirds and deer populations, but spending money to improve the habitat is a more financially sound plan.

Dr. Stephen Ditchkoff, a longtime feral-hog researcher from Auburn University, believes that a group of wildlife scientists are within five years of producing, “A toxicant made of sodium nitrite in a bait form and using feeders to deliver it to wild pigs. This chemical has proved to be a humane but very-effective toxicant. Scientists hope that landowners and hunting-club members will be able to use this toxicant to target feral pigs and eliminate them on agricultural lands and hunting properties.”

However, according to Sykes, there are alternatives.

“Actually, a landowner can do a better job for wildlife for less time and money by improving habitat than if he traps every predator on his land. By doing an effective job at burning, thinning timber and creating a better habitat where little critters like turkey poults, baby fawns and quail chicks can get away and hide from predators, then we have done a much-better job to help produce more wildlife with the amount of time and money we have, than if we rely only on trapping for predator removal.”

The numerous cedar and sweetgum trees present in some sections of Alabama don’t create good habitat for wildlife. Sykes mentions that some parts of the state have cedar trees so thick, “You barely can walk through them. The DCNR employed a company that would purchase the right to clear some cedar trees from state lands – particularly on hilltops. Then the DCNR did a controlled burn of those areas and converted that land back into rich Black Belt prairie land like that from decades ago that’s great for deer, turkeys and quail habitat.”

Another habitat property management tool the DCNR is using besides removing non-commercial trees to open up the forest floor to sunlight and provide more habitat for wildlife is mulching. A big machine comes onto the land, mulches the understory (small bushes and non-commercial trees) and grinds that brush up into mulch.

“Besides opening-up the forest floor to sunlight, which encourages the growth of native plants and grasses, we sow wheat in those mulched areas. Because we’re managing the land too for wildlife and timber, we can thin our timber stands more aggressively than a commercial timber company or a private landowner can,” Sykes said.  “We know that the more sunlight we have hitting the ground under the timber, the more food the property will produce for deer, turkeys, quail and songbirds.”

Most hunters are of the opinions that cotton fields are deserts for wildlife. When the DCNR bought Portland Landing to use as an SOA, 450 acres of it were in cattle and cotton production. The DCNR wasn’t in the cattle or the cotton business, so the Department contracted with a local farmer to plant cotton on a portion of this land. At the time of the purchase, the property also had numbers of invasive grasses that weren’t native to the State of Alabama or wildlife friendly, like Johnson grass and others. So, the DCNR removed these invasive grasses  before the farmer planted cotton. 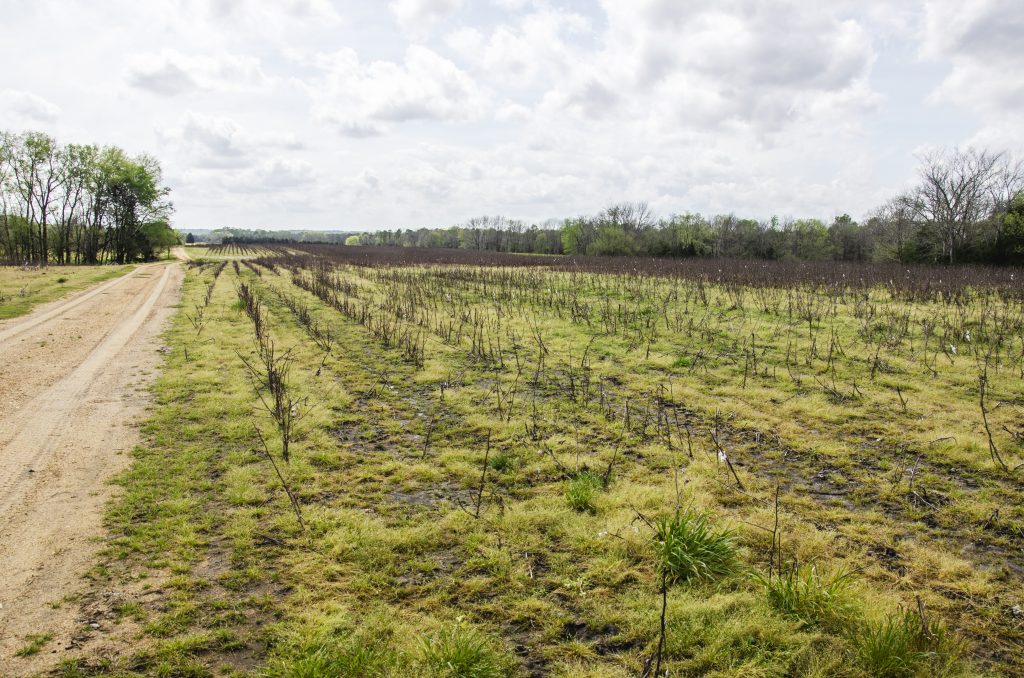 Although cotton fields never have been considered good wildlife habitat, deer eat cotton, and turkeys, quail and woodcocks feed on the panic grass beneath the cotton stalks that also provide protection from avian predators.

“We know that deer eat cotton,” Sykes said. “Turkeys like to strut and bug in the grasses growing underneath cotton stalks. We’re conducting a scientific study now on these cotton fields with woodcocks. We’ve put radio collars on captured woodcocks in these fields to learn their migration routes. So, the DCNR is providing a local farmer with a great opportunity to earn a living on this land and ridding the property of grasses not good for wildlife. Today these cotton fields are providing more quality habitat for the wildlife on that land.”

“Green and yellow grasses, commonly known as henbit and panic grass, are growing under some of the cotton stalks. The turkeys, quail and woodcocks feed heavily on the seeds that these grasses produce. The deer are grazing on the grass and young cotton plants as they come up,” he explained. “Also, cotton and corn stalks provide cover for turkey poults and quail chicks – protecting them from avian predators, and yielding plenty of grass seed to feed on under the protection of the stalks. Most people never think of a cotton field as wildlife habitat, and I agree that it’s not the very-best wildlife habitat. However, cotton fields give deer, turkeys, quail and woodcocks another type of diverse habitat, which they all prefer.”

Although most hunters probably may consider leasing farming rights to farmers who produce soybeans and corn, instead they can lease a portion of their hunting rights to cotton farmers and actually provide better wildlife habitat.

Burning Portions of the Land and Discing

If you understand the value of burning a part of your land each year to increase timber production, to prevent wild fires and to encourage new growth under pine stands, then if you’re leasing the land, talk with the landowner about using fire to improve the value of the land,  increase the wildlife on the property, make the property more accessible and give it more eye appeal.

Drew Tincher, is a wildlife biologist who is in charge of Alabama’s Oakmulgee WMA.

“Turkeys like open places because that’s where they find green shoots, grass seeds, acorns and insects to eat,” he emphasized.  “When there’s a fire regime, the turkeys will move out, and then as soon as the fire goes out, they’ll funnel back into those burn areas and feed on some of the burnt-up bugs and toasted seeds and nuts that will be exposed after a burn. You even may spot gobblers and hens out in a burn, while the burn’s still smoking. 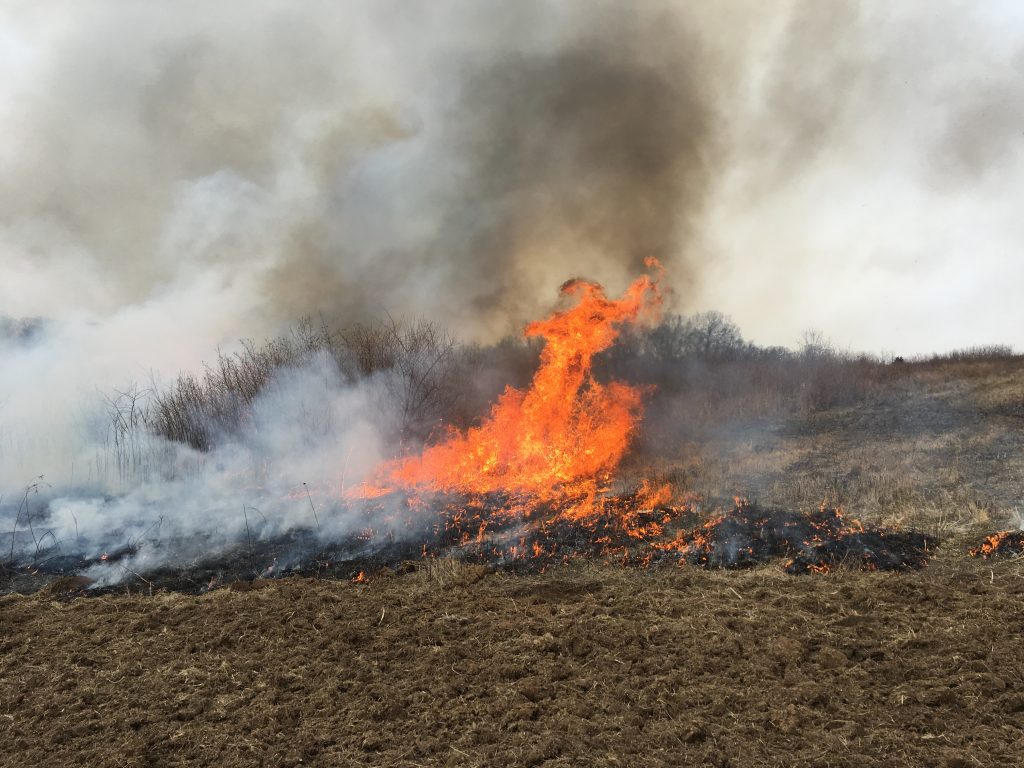 A controlled burn cleans-up the forest floor, exposes seeds and nuts for wildlife and stimulates the growth of new plants that both turkeys and deer eat.

“Generally, February and March are when we burn thick areas of our WMAs and SOAs in Alabama to open-up the woods to sunlight and to create wildlife openings where turkeys, quail and deer can feed. After the burn, just as spring begins, young sprouts, native grasses and bushes will begin to grow. That new growth is preferred by turkeys and their poults and deer and also provides insects and bugs for them. Also, often next to a burn will be a fairly-thick area where turkeys, quail and other ground-nesting birds can nest.”

“Burning resets Mother Nature’s plan for plant succession, by clearing the understory and releasing native grasses and shrubs in the soil bank,” said Courtney Conring, a wildlife biologist on four Alabama WMAs  “The DCNR does fall discing along roadsides, which is another form of resetting Mother Nature to promote successional plant growth. Successional habitat on public-hunting grounds – like weeds, forbs, grasses, briars and other green plants – next to hardwoods will give turkeys and quail places to rest and nest on the edges of the hardwoods.”

By managing the wildlife and the land through burning, mulching, controlling predators, removing non-commercial trees, leasing farming rights, planting green fields and maintaining roads, you can manipulate habitat for deer and turkeys and open-up your land for quail and woodcocks to provide maximum wildlife production.

You can go to Outdoor Alabama and learn more information about Alabama’s WMAs and SOAs and the state regulations governing them.

You can check out the Invasive Plant Atlas for more information about invasive plants that may impact your land.