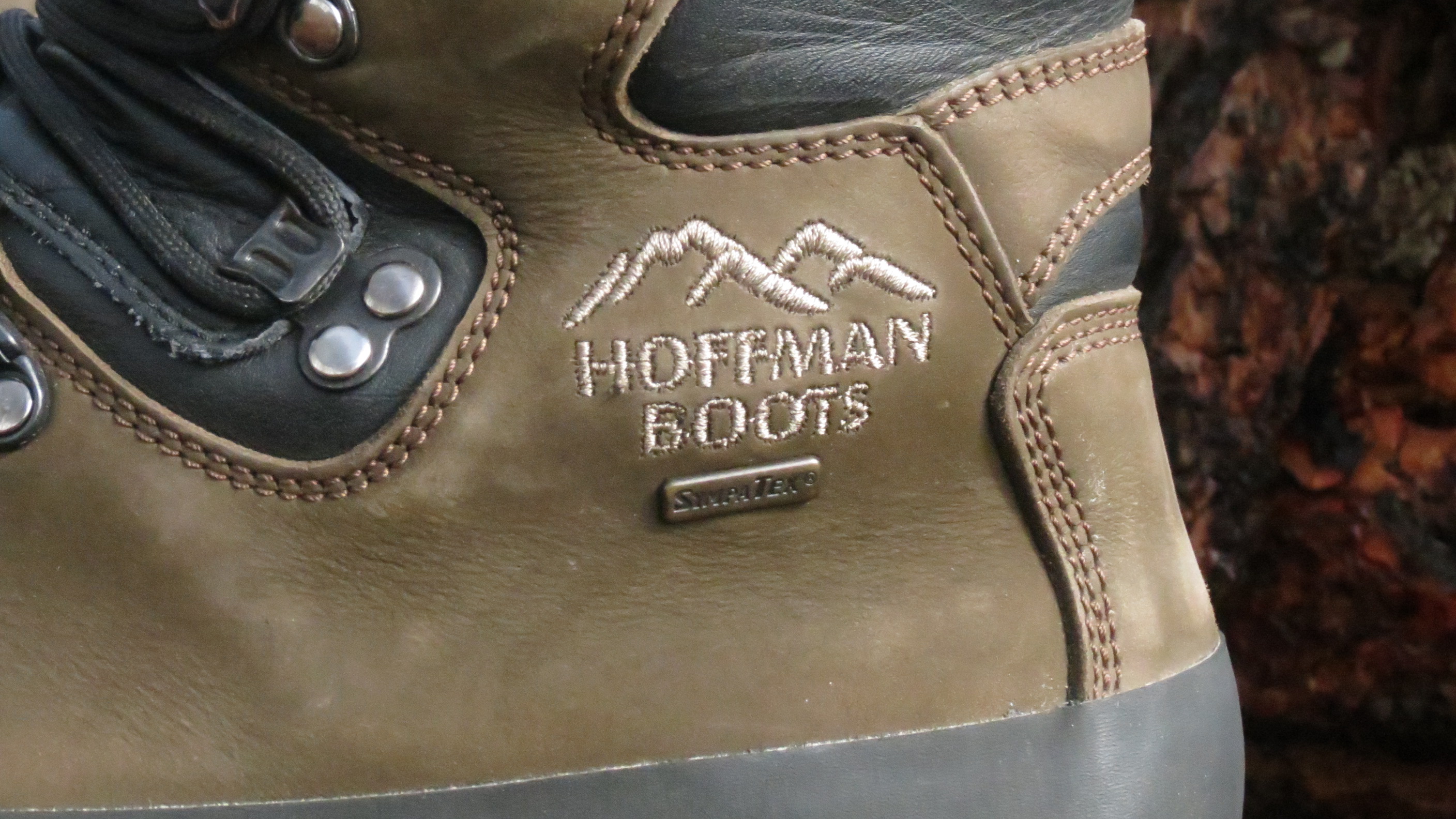 Last fall I had the opportunity to visit with Jim Hoffman of Hoffman Boots. I had seen an ad somewhere for his boots and decided to give him a call and find out what I could. What I thought would be a brief call turned into a great conversation about boots, Italy, his family history, and life over in Idaho. I found Jim to be a very genuine person and settled on the 8 inch Hoffman Explorer with 400 Gram Thinsulate. As I told Jim, we will beat the tar out of them and provide the feedback. We also had two guides pick up a pair one of the un-insulated explorer.

My first impression out of the box was glee, no question these were a real elk hunting boot. Most impressive was I ordered them one day and the next day they were sitting in my garage. The unfortunate thing being the guides were there also, and when I pulled those new Hoffman’s out of the box they began to talk about the outfit supplying boots for guides, birthday presents, and bonuses.  All things an outfitter doesn’t want to hear from staff three weeks before the season even opens. It wasn’t a bad thing for Hoffman Explorer boots though because two guides ended up ordering a pair. A great looking boot is wonderful on the eyes, but what really matters is how it is on the feet. 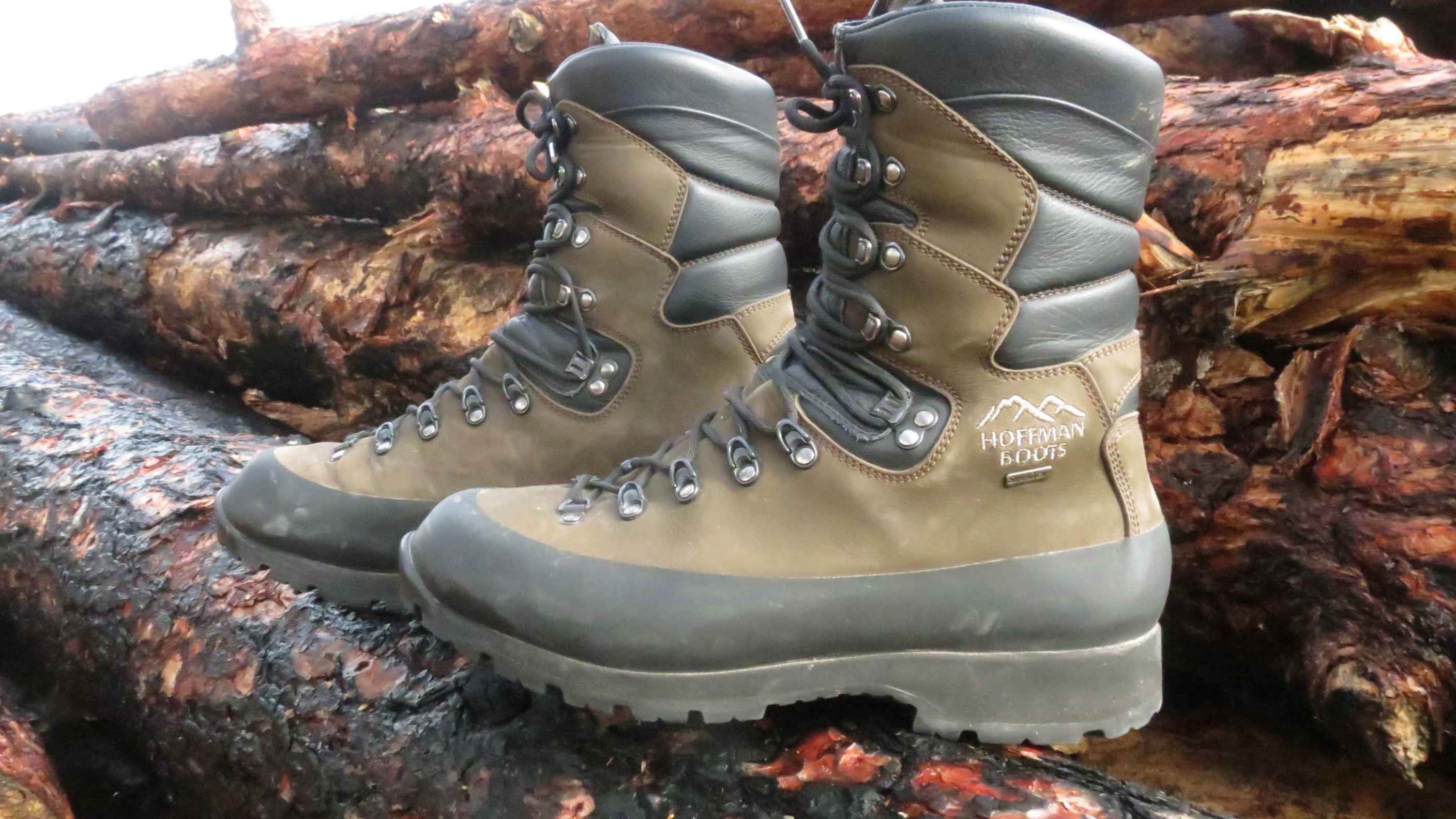 Let’s start by taking a look at some of the features of the Hoffman boot. Hoffman Explorer insulated boot is a 400 gram 8″ boot. It has supportive heel contour and toe and heel traction teeth. The nylon midsole is 5.5mm with cushioned contour insole and a Vibram premium traction sole. It boasts Heavy-duty 2.8mm Anfibio leather upper, one-piece vamp construction, and the standard protective rubber rand. With triple heel stitching and heavy-duty hardware string grommets, this is a tough boot. It also has a heavy padded collar for excellent comfort and is manufactured in Italy.

Let’s take a look at the fun stuff, how did it perform in the field? Our first guide wore the un-insulated boot in archery elk and reported excellent performance. Solid traction, quick break-in period, and legitimate waterproofing. He is a former Kenetrek owner and reported the performance equal to the Mountain Extreme. It wasn’t long before the snows hit and I pulled out the Hoffman Explorer boots. The first thing I noticed was the comfort level, these are a seriously comfortable mountain hunting boot. I conducted several days of hardcore hiking guiding clients through all conditions and I too found the boot to be equal to any high-end hunting boot on the market.

With Hoffman’s 5.5mm midsole the boot allows for more flexibility than its main competitors. I do a fair amount of hiking in burns and blowdowns, and the added flexibility gave me more surface area contact and better feel control when hopping logs.  One of my biggest complaints is the 7mm insole on so many hunting boots, I think the 7mm soles are just too rigid and its like walking on logs with a pair of snow skis. Hoffman’s 5.5mm midsole solved that issue for me. Many of the Italian boots are made for rock climbing, a stiff midsole such as 7mm provides a toe catch and platform for the foot when rock climbing, but I’m not rock climbing, I’m elk hunting. The added flexibility provides control and surface area contact, important for things such as crossing creeks by stepping on rocks, log hopping, and sneaking up on bedded bulls.

Equally important is waterproofing, traction, support, and comfort. I had no issues with the waterproofing even in several inches of snow, rain, and sleet. The traction was excellent in all three basic elk hunting conditions: uphill, downhill, and side hilling. A boot simply must be able to provide enough support in the ankles to withstand the rigors of side hilling. When I side hill I turn an ankle and dig into the hill with the side of my boot, others step with their boots flat and let their ankles float. I used both methods and found good traction and support in the Explorer. The toe and heel teeth were also effective, most experienced guides open stride downhill and take much bigger steps than normal letting their legs go where they naturally land, you can move very quick downhill with this method but you had better have confidence in your boot traction to employ that technique. I was hesitant at first but soon was using the open stride downhill technique with complete confidence in the Explorer. The boot has all the support you would expect from a high-end mountain boot and the comfort was absolutely superb. I had virtually no break in period and the others break in was very quick.

“Hoffman’s were great for walking and warm. I had no problem climbing side hills with a half foot of snow with traps and animals on my back, love ’em.”

The only complaint I have about the boot was the debris pickup from the sole.  It has an open traction pattern which typically provides quick debris removal, however, the wet snow and even mud was noticeable sticking to the bottom of the boot. In one instance I had a hunter walk in front of me in the snow and his boots did not pick up what mine was picking up. I have informed Jim Hoffman of this and he was very responsive and will be looking into it. As most of you know who follow the Western Exposure blog, I often complain about the price of items, however, I cannot complain about the Price of the Hoffman Explorer boots. Coming in at 385.00 for the Explorer, its a bargain. When I compared the cost to its most similar competitors, it came in at around 100 dollars cheaper, some whopping savings overboots made essentially in the same town in Italy.

I asked Royce, our packer, how his Hoffman’s treated him this winter he texted this reply: “Hoffman’s were great for walking and warm. I had no problem climbing side hills with a half foot of snow with traps and animals on my back, love ’em.”  Royce used the boots all fall packing in the backcountry and all through the winter season on his trap line and they held up excellent.  I give the Hoffman boots two thumbs up and recommend them with complete comfort. I love the performance and the price point is fantastic. Every now and then a great product comes along with a great price tag, Hoffman Explorer boots are one of those products.