Fishing for bream and crappie sizzles in hottest summer months

Despite the heat, the fishing potential remains good for Alabama panfish through the hotter summer months. While August may not supply classic weather for bream and crappie fishing, good fishermen actually use the gifts of Mother Nature to their advantage. They recognize the habits of fish at this time of year and tweak their techniques accordingly. Whether that means fishing deeper in the water column—or earlier or later in the day or night—visiting unfamiliar spots on a local lake, or experimenting with different techniques, the fish are still feeding and waiting to be caught.

Much like other times of the year, bream remain the most reliable alternative among the hot weather possibilities. Bream thrive in warmer weather and make up the bulk of the bream catch. Throw in the occasional shellcracker, and the mixed bag becomes a fish fry awaiting the grease.

While not as readily available or as easily accessible as in the spring, crappie also can be caught. Catching crappie, however, requires a little more skill and a little more planning than fishing for other panfish species. Crappie fishing in August is primarily a trolling activity backed up by a few other techniques that can also produce fish. 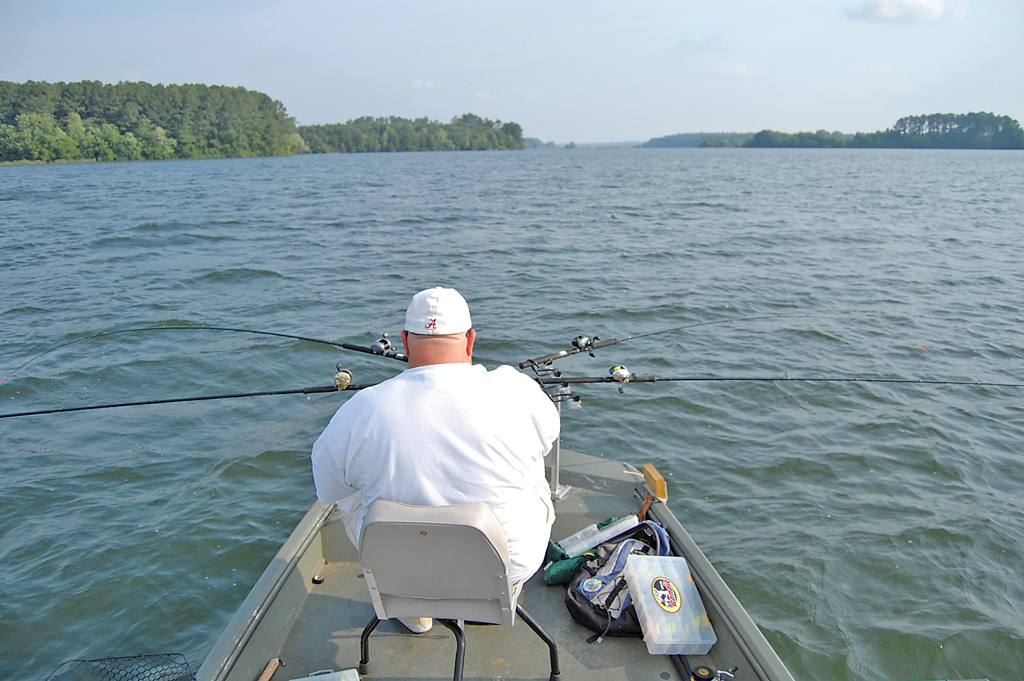 There is really not a bad summer month to bream fish. Bream remain receptive to just about any type of offering, despite water temperatures that inch toward 90 degrees in most areas of Alabama. For those seeking bream this month, think about any factor that creates easier living conditions for the fish, any type of shade, current, or food source. If an area offers at least two of those scenarios, then the fish are likely to be in a feeding mood.

One of the first places that I look for hot-weather bream is along limestone bluffs, a structure abundantly available on Alabama streams and rivers. On the Tennessee River in the northern part of the state, bream will suspend at various depths along these bluffs, seeking just the right water temperature. The same holds true on other state waters, as well.

These fish can be caught in a variety of ways. One of the best sights in fishing is a floater disappearing into the depths, indicating that a good fish has taken the bait. The traditional hook-sinker-floater combination accounts for thousands of bream each year, and that type of rig will catch fish on the bluffs as well as in other situations. If the fish are holding at depths that make casting unwieldy, consider using a slip float.

“One of the first places that I look for hot-weather bream is along limestone bluffs, a structure abundantly available on Alabama streams and rivers.”

I have also caught bream at depths of up to about 20 feet while tight lining either with a drop-shot-type rig or by simply removing the float from the line and adding just a little more weight to get the bait down. Use a #2 or #4 hook and a 1/8-ounce drop-shot weight or a couple of small, split shot to get the bait to the required depth.

For bait, worms—either red worms or nightcrawlers—and crickets are the time-honored tickets to bream success. However, they are not the only live baits that attract bream. Big bream love tuffy minnows; crappie fishermen can attest to that fact. While minnows will not draw nearly as many bites as worms or crickets, they do account for a better quality bream. Just remember that minnows require a little extra care in the heat of summer. An aerator is mandatory, and some fishermen periodically drop a small chunk of ice into the minnow well to keep the water cool and the bait lively.

Another bait also requires a little extra effort from the fishermen, but the results can be incredible at times. Take the time to net or seine a good stock of crawfish before heading to the lake. Small crawfish fished on a #4 hook and just enough weight to ease the bait toward the bottom are deadly for bream—particularly shellcracker—along the bluffs. The only negative associated with using crawfish for bait is that just about every fish that swims loves crawfish. Don’t be surprised when a big bass hones in on a craw and provides an epic fight on the lighter tackle normally used for bream fishing.

While the bluffs provide food, shade and safety for bream, a second location to always consider is around dams. Much like the bluffs, dam areas provide all the elements necessary to maintain good fish populations and boast the added influence of current to the equation.

While neither bream nor shellcracker like to hold directly in swift current, they will relate in some way to the moving water. They may be hiding behind a wing wall or behind a rock, awaiting an easy meal.

While many of the same techniques and baits mentioned previously will catch fish around the dams, lures also factor into bream fishing in these areas. Small jigs and grubs are good at times, but the absolute best bream lure around a dam is the venerable Rooster Tail. This classic inline spinner will catch big bream and a variety of other species in the current. One tidbit to consider is the size of the lure. Upsizing just a little will help cull out some of the smaller fish. Think about using either a 1/8- or 1/6-ounce Rooster Tail. The larger version is probably a little larger than normal for summer panfish but also accounts for bigger fish. Fished on light spinning or spincasting tackle, the Rooster Tail is likely the only lure needed for bream in a tailrace area.

Finally, take advantage of one of nature’s great phenomena to catch bream this month. While the black cloud willow fly—or mayfly—hatches have usually passed, there will continue to be to be sporadic hatches through August.

The presence of willow fly hatches can create some incredible top water action for summer panfish. Both bream and shellcracker can be caught on top. A light fly rod with a floating line and small diameter mono leader is a combination difficult to improve upon for fishing around hatches. Combine this rig with a surface lure like the Accardo Spook—white preferably—or any of the smaller Betts bugs and a big bream or ‘cracker will provide quite a battle.

Crappie fishing in the extreme hot weather of August is not as simple as bream fishing. Gone are the days of spring when crappie hug the banks to spawn, and all that’s necessary to catch them is a pole and a bucket of minnows. Most crappie are now located offshore and require some specialized knowledge and equipment to catch.

While my summer crappie fishing knowledge is somewhat limited, one of the great things about this business is the opportunity to fish with people who know how to catch fish. One such individual is A.J. Barkley, of Hartselle, Ala., who trolls crankbaits for crappie even in the hottest weather. He primarily fishes the Tennessee River and Bear Creek lakes in North Alabama, but his technique is certainly not limited to those waters.

“Crappie fishing in the extreme hot weather of August is not as simple as bream fishing.”

When I quizzed him about how he fishes for crappie in the summer, he provided a quick overview of cranking crappie. Barkley normally uses an eight-rod lineup for trolling crankbaits. He starts with two 14-foot rods in front and rigs with a two-ounce sinker ahead of the crankbait, running the lures just behind his boat on short lines of 15 to 25 feet. He then sets out three lines on each side, starting with a 16-foot rod, followed by a 12-footer and ending with an eight-foot rod, staggering the line length of each.

Barkley uses both medium-depth and deep-diving crankbaits, each with subtle differences in finish and movement. Among his favorites are #5 and #7 size Lindy’s Shadling, Bandit 200 and 300 series, Strike King’s Series 3 and 4, Academy’s H2O and Norman’s Little N.

Trolling speeds vary, although pulling crankbaits is usually done at higher speeds than other trolling techniques. Barkley normally pulls crankbaits at 1.5 to 1.7 miles per hour, using a handheld GPS unit to monitor speed.

“This is a very relaxing style of fishing,” Barkley said. “It’s strictly a reaction strike, and typically the fish are a bit bigger than average, although you will at times catch small fish. Another added benefit is not having to keep live bait alive in the hot summer months to catch fish.”

A totally different approach to crappie fishing involves the using lights at night. In ages past, the practice involved suspending lanterns just above the water’s surface. Modern technology, however, has evolved to the point that lanterns have largely been replaced by a variety of types of lights, some of which can be mounted to the side of a boat or dock, some that float, and still others than suspend underwater.

Regardless of the light setup, the premise is that the light triggers a food chain reaction that eventually results in the presence of crappie and other game fish. Fishing at night under the lights is one of the few occasions that crappie will be found shallow during hot August weather . The fish can literally be seen at times slashing through the balls of baitfish drawn by the lights.

Equipment and techniques for night fishing around lights is basic. Tight-lining a minnow on a #2 hook and a small split shot is a common technique, while other fishermen prefer to use small jigs.

One final possibility to consider for summer panfishing—and a great way to beat the heat—is wading. Alabama’s abundance of small streams presents a variety of opportunities. The wader will catch numerous bream, a few shellcracker and other types of panfish. One of my favorites is commonly called the rock bass—also known as the black perch in North Alabama.

The black perch readily takes both lures and bait, grows slightly larger than the average bream, and also makes for good eating. Look for black perch around bluffs, other rocky areas or wood. They ambush prey from around these structures. The strike is explosive, although the fight rather ordinary compared to bream or shellcracker.

Wading a stream calls for light tackle, either spinning or fly-fishing gear. Two great stream lures are the Rooster Tail and the Beetle Spin, both in 1/8-ounce size. Larger streams allow for casting a fly line, and all types of panfish will rise to a popping bug, plastic cricket or spider or dry fly. Don’t let the heat of summer keep you away from the water. These tips and techniques should prove helpful in catching a stringer full of good-eating fish. Panfish are there for the taking, and sometimes the hotter the weather, the hotter the action.