Anglers who chase giant spotted sea trout are specialists who know how to catch speckled trout, and who view the lunkers as a whole other species from the 15 to 20 inches that make most of us happy flopping in the cooler. They chase the biggest fish in different places from the schooler-size trout, use different lures and tactics, and most consider these huge trout to be catch-and-release targets, since they’re valued so much more as potential trophy catches than as slabs of tasty fillets.

Among big trout aficionados along the bays, beaches and estuaries of the Gulf of Mexico, one of the lures that stands out as a frequent choice is a simple-looking soft plastic known as the Slick Lure. The lure, invented by fishing guide Captain Joey Landreneau of Gainesville, Florida, is designed to imitate some of the favorite foods of larger trout, finger mullet and menhaden in the four to six  inch range. 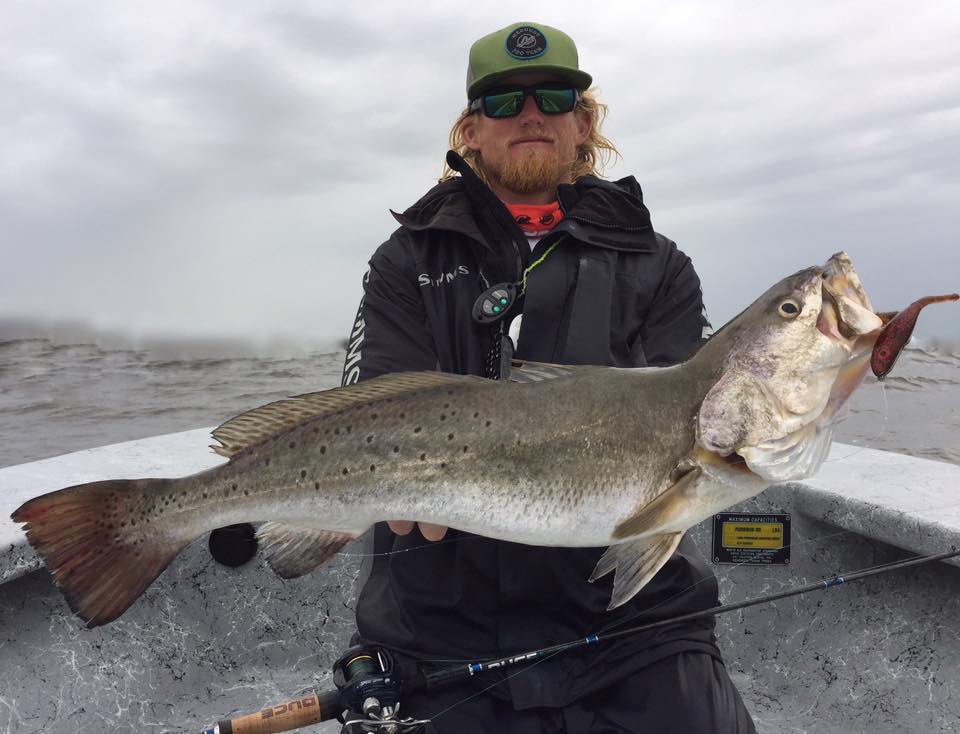 This giant spotted sea trout could not resist the temptation of the Slick lure.

It’s got plenty of weight and a very streamlined shape, making long casts possible. That’s a big plus for wary fish in the shallows, and big trout are among the most cautious of coastal species, particularly when they’re prowling up on the flats in knee-deep water.

Having knowledge of their diet is a key component of knowing how to catch speckled trout, and biologists with the Florida Fish & Wildlife Commission report that though smaller trout prefer shrimp as their primary food, the larger fish much prefer finfish. The Slick takes advantage of this preference. And, it’s a single-hook lure that’s almost completely snag proof, making it possible to fish in very shallow water over oyster bars and through turtle grass and other habitat that holds bait—and big trout. 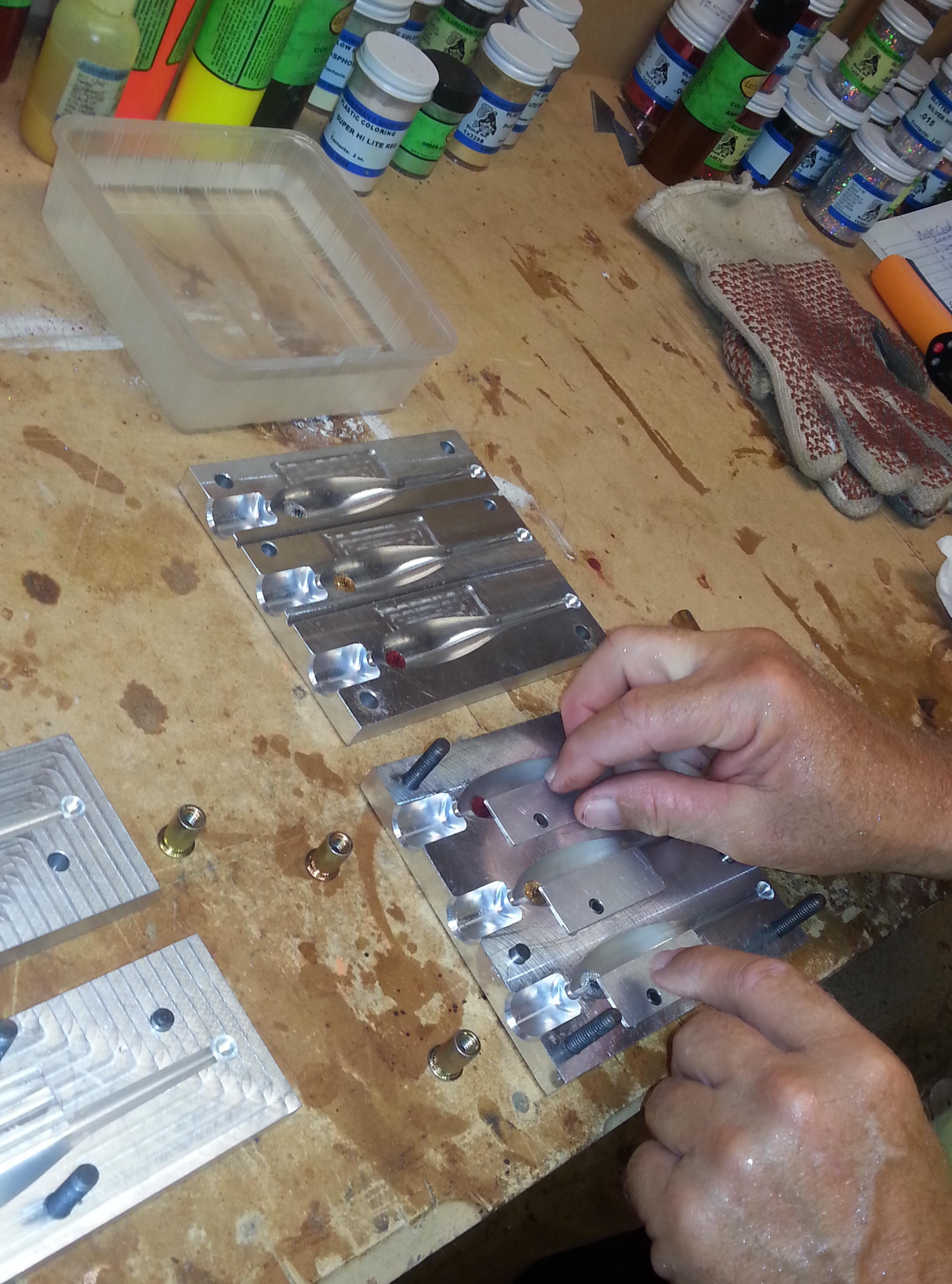 Joey Landreneau, the Slick originator, readies the mold for a new batch of lures.

The Slick is about as basic as it comes in soft plastics. It has an oversized shad-like head, a pencil-like tail, no fins, no big “thumper” tail, no beads or rattles or scents. No national advertising campaign. There’s not even a factory, really, the originator Joey Landreneau hand pours them, often to order. Despite the labor-intensive production, it’s cheap, only 5 bucks for a four-pack. In fact, the recommended Owner 4/0 Beast Twist-Loc hooks cost nearly as much as the lures.

If you find yourself wondering “how to catch speckled trout,” look no further, all the Slick does is catch fish. Lots of them, often in XL sizes. In the right places, where the water is one to five feet deep, and at the right time, when there are moving tides, plenty of menhaden, mullet or other baitfish around  the Slick can be a hard lure to beat. 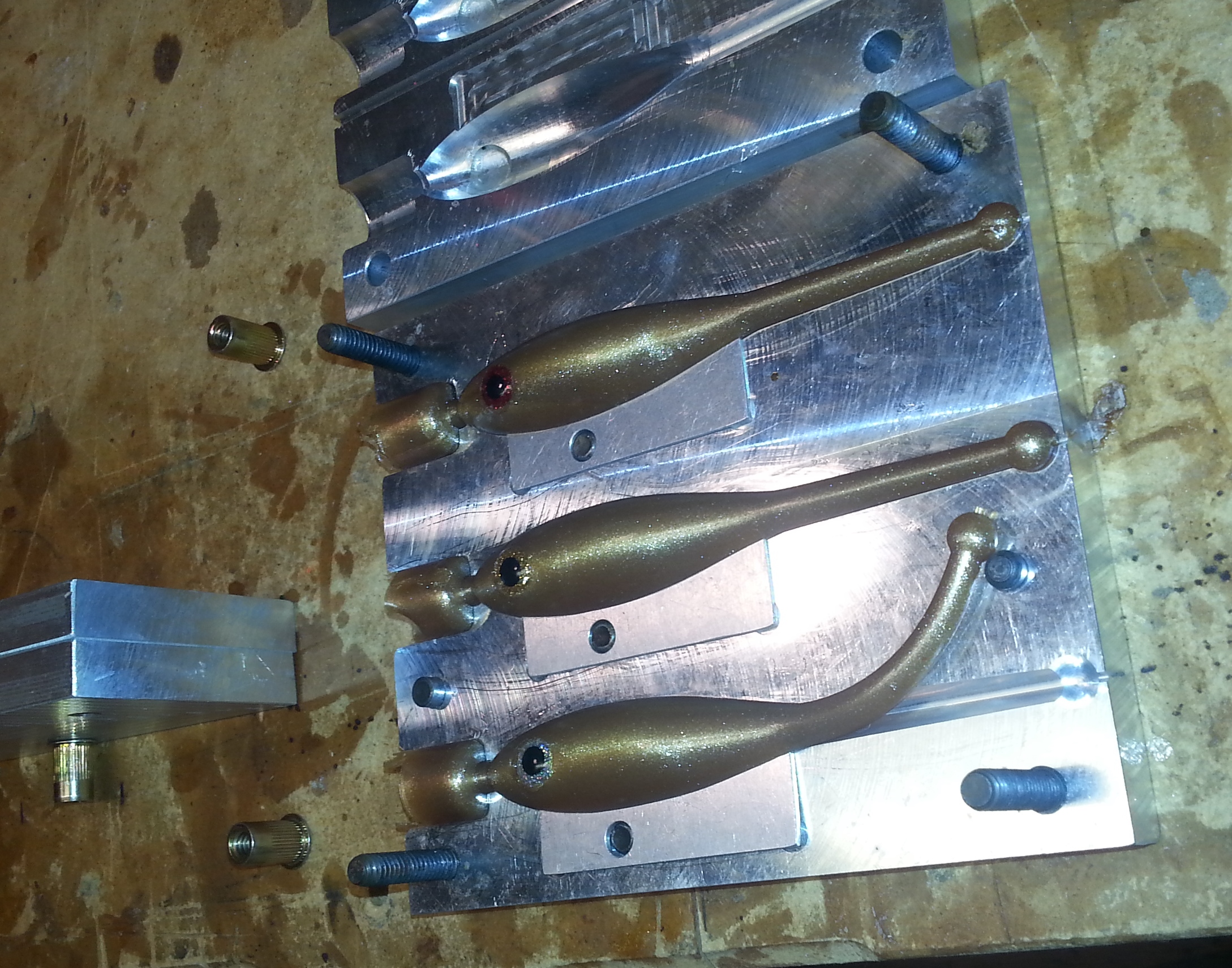 Once the soft plastic sets, these Slick lures are almost ready to be put to work landing many different types of fish.

Surprisingly, with a lightly weighted hook, it can also dredge big fish up from deep water. Captain Patric Garmeson, who guides on Mobile Bay, says that one of his favorite tactics in winter and early spring is to let the Slick free-fall into the depths of Theodore Industrial Canal, where the trout stack up at depths of more than 30 feet.

“I just let it sink, with a twitch now and then, and all at once you see the line twitch and you set the hook,”Garmeson said. “You have to be patient, but it’s a good imitation for a cold-stunned baitfish and they really eat it.”

The lure has proven particularly deadly on big spotted sea trout, but it also catches everything from redfish to snook to whopper flounder. It can be rigged totally weedless, which makes it a winner in areas where reds plow back into reed beds and floating debris, as they do all over the Louisiana Delta.

Part of knowing how to catch speckled trout, of course, is rigging the lure and fishing it right. With a specialty lure like this one, the rigging is critical. The wide-gap 4/0 hook is a must, and many anglers opt for one with a 1/8 ounce weight molded to the shank. Without weight, the Slick takes forever to sink and tends to plane to the top when jerked, though fishing it weightless in thick cover can be effective.

The recommended hook has a screw-pin type keeper on the eye. Landreneau recommends inserting this pin into the nose of the lure, then doubling the lure over and inserting the hook point through the molded in belly slot straight up through the back of the hook, so that the lure lies perfectly straight along the shank of the hook—if it’s bent at all, the lure does not work properly. There’s an easy-to-follow video on doing it right on the website https://pureflats.com/rigging-instructions-for-the-slick .

It’s very weedless rigged with the hook point exposed, but can be totally so by “skinning” the hook, burying the tip of the hook ever so slightly in the skin of the back of the lure to prevent it catching moss and loose grass. When a fish grabs the lure, the point pops out of the soft plastic and it’s game on.

While discussing how to catch speckled trout, Garmeson stressed that a “sweeping hook set” is a must.

“You’re driving that big hook through the plastic and into the fish’s jaw, so you need to reel down, point the rod tip at the fish and really give it a strong set,” Garmeson said.

Garmeson emphasized that braided line is also a big plus to allow feeling the take as well as in getting a solid hookset because mono stretches too much. Garmeson recommends fishing it on 20 pound-test fluoro leader about 18 inches long, tied in with reverse Albright or similar knot, to “stiffen” the connection and prevent it from looping back over the braid on a twitching retrieve. 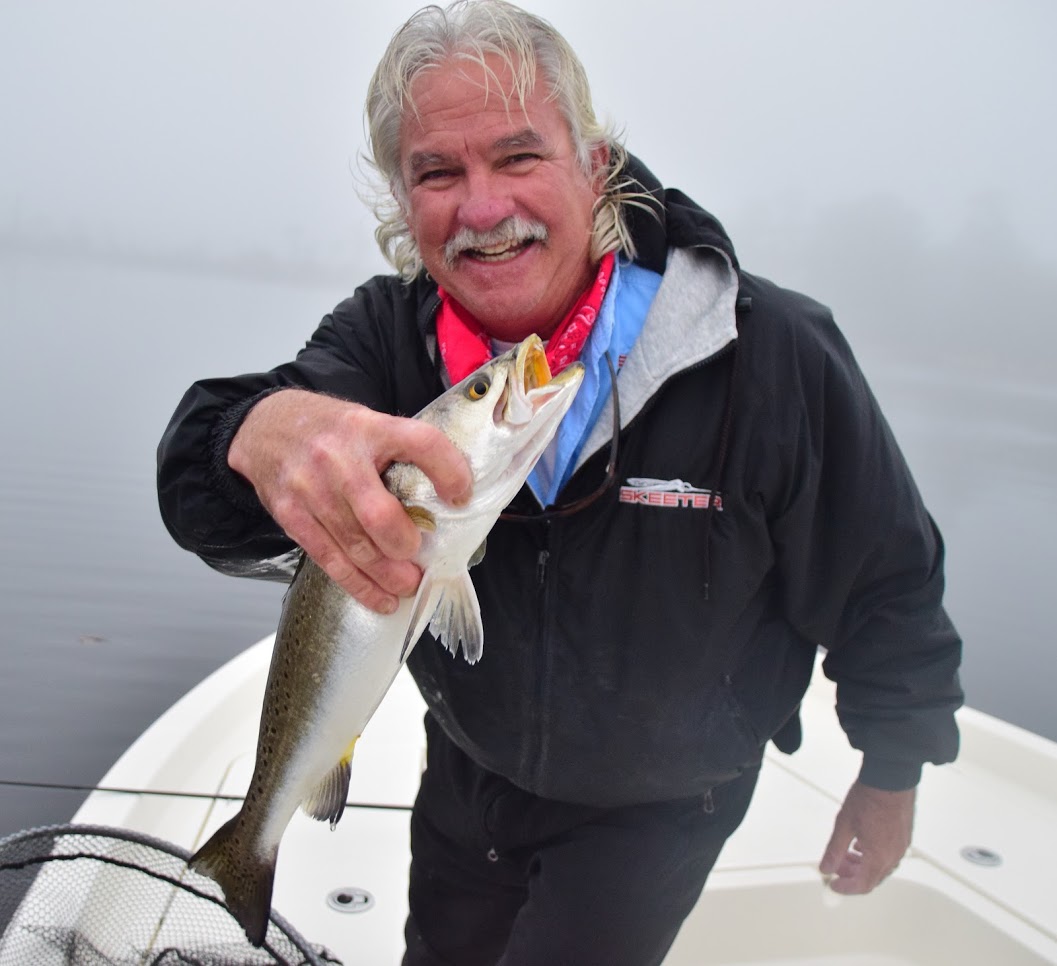 Captain Bobby Abruscato knows how to catch speckled trout and also knows the value of a high quality lure like the Slick.

Captain Bobby Abruscato, another of the best-known guides on Alabama’s Lower Mobile Bay and a man that knows how to catch speckled trout, likes to “slow-roll” the lure, keeping up a slow but steady retrieve and twitching it now and then.

“You really don’t have to do too much to make a trout eat a Slick,”Abruscato said. “They just swim up and inhale it most of the time.”

Other anglers like a more conventional jerkbait action, with a sharp jerk or two followed by a brief pause, then more sharp jerks. The jerks cause the lure to dart back and forth, imitating an injured baitfish.

The standard Slick is just under five inches long, while the newer Lil’ Slick is a lighter, smaller soft plastic designed to fish on a smaller swimbait hook or jig head.  Landreneau says it also works well on a 1/8 or 1/16-oz jig head or under a rattlin’ cork rigged on a 1/4-oz jig head.

The standard mullet and menhaden colors, pearl, silver and white with green, gray or blue trim, do most of the damage, but many anglers also do well with bright pink, chartreuse and many other colors.

The Slick Lure is one of the best solutions when you are contemplating “how to catch speckled trout,” and for more info visit the Slick Lure website at www.sales@theslicklure.com.