How to Catch Tarpon – Alabama Tarpon

Television shows from Florida often highlight the magnificent action that can be had in places like Boca Grande and the Florida Keys for the ultimate sportfish – tarpon. The shows often portray catching the tarpon as easy as child’s play. However, anyone who has fished for tarpon in Alabama waters knows that is not the norm. A local Alabama guide has honed his skills on catching silver king tarpon over the last several years. During that time, he has put together a great game plan for how to catch tarpon right here in the Cotton State. Let’s look at that plan.

Capt. Stillman Lyons Bousson Sr. of Weeks Bay, Ala. knows exactly how fortunate he is to be living on the Alabama Coast. From the outstanding inshore action of Mobile Bay, to the fantastic offshore fishing into the Gulf of Mexico, Captain Bousson enjoys it all. However, over the last several years, Captain Bousson has turned his attention to a species of fish that travels a mid-range area of the Alabama Coast. Tarpon, moving along in an annual migration from the east, offer Bousson and others a wonderful opportunity each summer to do battle with this outstanding sport fish.

Capt. Lyons Bousson has been an inshore guide for many years on the Eastern Shore of Mobile Bay. During those many years, Bousson was able to maintain contact with some of the true “pros” of tarpon fishing on the Alabama Coast. Hayden Olds, Troy Price, Dennis Rice and Monroe Turner were considered the tarpon gurus of the area and absolutely knew how to catch tarpon. These fine anglers decided to take Bousson under their wings and teach him the ropes.

After the group of anglers swapped a few silver king tarpon trips for speckled trout trips, it was decided that Bousson was ready to shine on the tarpon waters. They said, “You got this Lyons,” and the Tarpon School 101 was over! 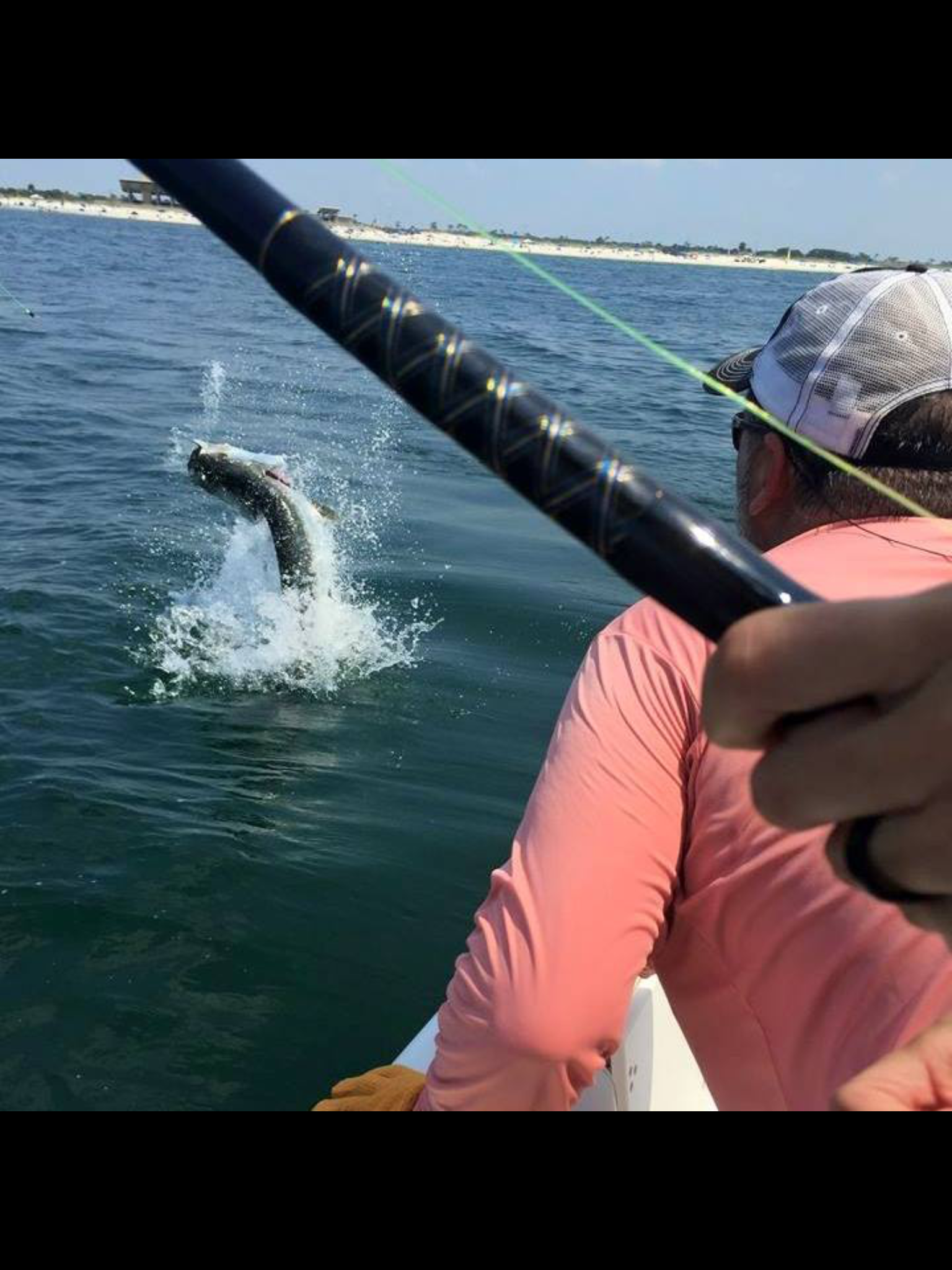 There’s not much more as exciting as seeing tarpon on the end of your line.

Captain Bousson loves all types of fishing that is available in his backyard, but tarpon fishing holds a special place on his list. It is that passion that drives him to endure the conditions required to be successful.

“Tarpon are a magnificent fish to target. They’re tough, strong and gorgeous to the eye. However, to catch one in our area you have to have dedication. Sometimes it can take hours before a tarpon or pod of tarpon swims into your bait setup. It can be miserable hot and steamy. In fact, it can really be a grind, but the rewards of hooking and fighting these ‘beasts’ make it all worthwhile,” Bousson explained.

According to Bousson, tarpon start their westward migration to the Alabama Coast in mid-June.

“We actually hope for very late cold fronts to stall the migration. What that does is bunch the tarpon up and cause them to travel in larger schools, giving us a better shot at hooking one. Even so, we need the water temperatures to be in the mid-80s to get things started. We hope for a calm morning where the fish can be more easily seen. The fish seem to prefer 13 to 25 feet of water when traveling. Since the fish often come to the surface, gulping air, we look for that activity, which is known as ‘rolling,’” Bousson said. “We also look for the fish to get in a ‘daisy chain.’ This is where the tarpon get in a line and takes turns being the leader of the pack. This period can also be a feast or famine period. You can see 100 to 200 fish on the move or you can see zero. Just depends on the day.”

This activity moves into July when some of the fish seem to turn northward into Mobile Bay in mid-July. According to Bousson, the biggest movement coincides with the July full moon.

Tarpon are truly a traveling species of fish. Bousson and his charters found this out by assisting the Alabama Marine Resources Division in a tagging program.

“We were glad to be involved in the tagging program. It made us privy to the movement of the tarpon as recorded by the study. One of the fish we tagged and fitted with a transmitter off Orange Beach was found to have traveled to Petit Bois Island off Mississippi in just one day. A week later the fish was located off the coast of Louisiana, in West Delta,” Bousson said.

By August, the pressure on tarpon declines sharply on the Alabama Coast. Not many know it, but silver king tarpon can be found in good numbers in Mobile Bay at that time.

“The upper end of Mobile Bay gets covered with large schools of menhaden in August. Redfish, jack crevalle and the mighty tarpon all take advantage of this. Lots of anglers will employ the chumming technique to target tarpon,” Bousson said. “To chum the silver kings, you must cut up menhaden and toss out pieces behind the boat to lure the fish to you. While cutting up the menhaden with a large pair of scissors, you should toss every third piece into a bucket of bay water. After a period of time, you will have accumulated a ‘menhaden stew.’ Once the bucket is full, you pour the contents over the side to expand the chum line,” Captain Bousson said.

Captain Bousson is the father of three kids. Twins, Lyons Jr, and daughter Mary Michael, plus younger son, Bay. Captain Bousson was very excited when Lyons Jr. wanted to follow in Dad’s footsteps and become a Coast Guard-licensed captain and guide. He has enjoyed passing on his knowledge of how to catch tarpon, along with many other species, to his son and watching his son grow into an excellent fisherman is definitely a source of great pride as well. 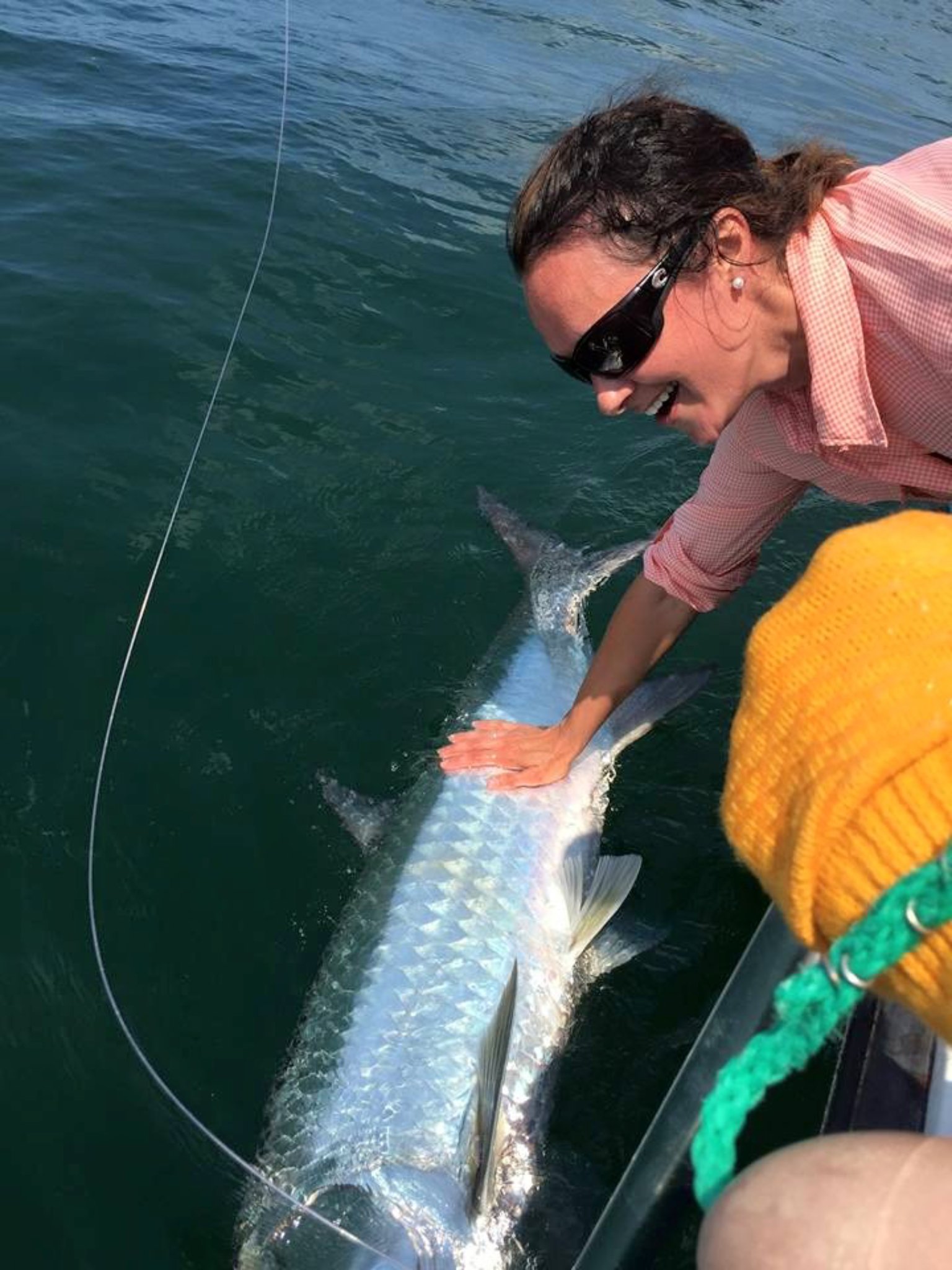 A mighty tarpon is finally alongside the boat.

“I’ll never forget Junior’s first guide trip on his own. My wife, Michelle and I were just down the beach fishing as well. My cell phone rang and it was Junior telling me that they had a good tarpon on. My first instinct was to head down there to coach or help in any way I could. However, Michelle told me ‘no, he’s got to do this on his own.’ I followed her advice and just waited for the call that the fish was alongside the boat. We then made a mad dash to see the catch. I’m not going to lie. I had tears fall down my cheeks I was so proud. To top it off, it turned out to be our biggest fish of the year at about 140 to 150 pounds,” Lyons Sr. said.

Although the memory described above is pretty awesome, Captains Lyons Sr. and Lyons Jr. have big plans to make memories for their charters in the coming years. The two have come together to form Fairhope Charters, giving others the opportunity to enjoy the wonderful sport of tarpon fishing and fishing Mobile Bay for smaller game.

Younger son Bay Bousson is quite the angler himself. Bay is 13 years old and already has many great outings under his belt. This is evidenced by the many Facebook photos displaying his catches. I think it’s safe to say that Fairhope Charters has a captain-in-waiting, who absolutely knows how to catch tarpon, with Bay Bousson.

When it comes to baits, Bousson prefers a frisky live hardtail, threadfin herring or crazy fish. “We like to present our baits under a cork or a small balloon. I feel that we need to keep the resistance the fish feels to the absolute minimum. I also keep a rod rigged with a plastic jig tied on to try and tempt tarpon. They are really lazy fish and don’t normally chase a bait down. So you have put your offering within two feet of their face to get their attention,” Bousson said.

When it comes to a tackle setup, Bousson keeps it simple. “We don’t like to extend the fight with any of these beautiful tarpon. We set up our gear to whip the fish quickly and set them free. We use heavy spinning tackle, loaded with 50-pound-test braided line. We attach a 130-pound-test fluorocarbon leader and a large circle hook. We hardly ever kill a fish using this setup,” Bousson said. 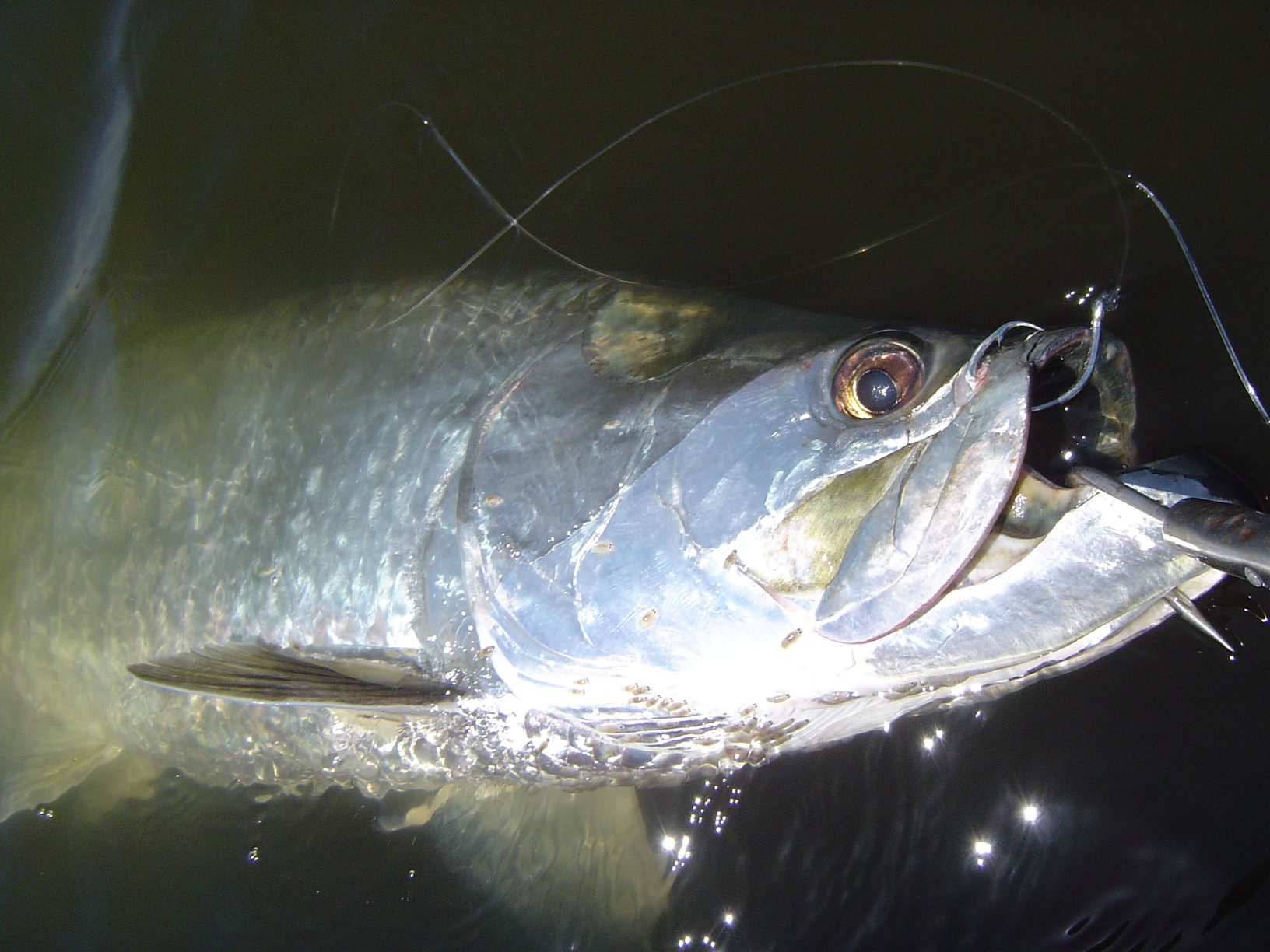 Tarpon should be taken with the use of circle hooks.

There’s no question that silver king tarpon fishing is game unto itself on the Alabama Coast. It takes knowledge, skill and dedication to make your tarpon dreams come true. There’s no question it is doable on your own. However, going with a captain who knows how to catch tarpon can put you miles ahead of the game.

Whatever route you choose, we hope that hooking a silver king tarpon  becomes a reality in your fishing bucket list! See you on the water! 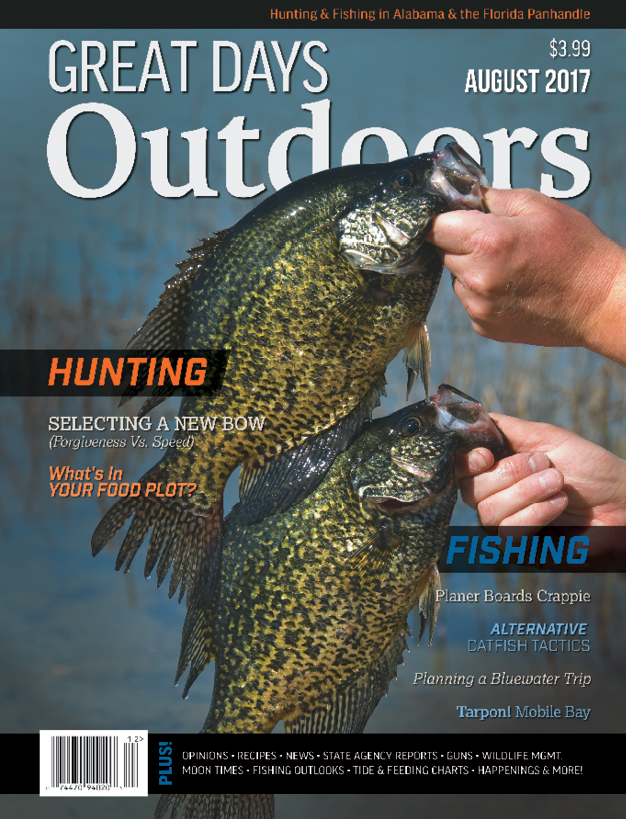 This article first appeared in the August 2017 print issue of Great Days Outdoors Magazine. For more great hunting and fishing content for the deep South, subscribe to Great Days Outdoors print and digital editions or click the image to download this issue.