One of the most rewarding experiences over my past eight years of beach guide fishing has been introducing hundreds of new saltwater anglers to the wonders of surf fishing. No matter which beach we fish or time of year we fish, I like to believe there are always possibilities of catching fish if you know how to surf fish. Many times, it is the small details that help these folks understand the nuances of gulf beach fishing and become more successful anglers.

Many folks are so eager to “jump right in”’ to catch these sea monsters that they come equipped only with long rods and too heavy tackle that excludes the vast majority of fish that live in the surfzone. Not that there is anything wrong with learning the basics of surf fishing using trophy classed spinning tackle in the 20 pound plus range, but they are going to spend a LOT more time looking for seashells between bites. It seems most newcomers are content to “tackle down” to the proper, best surf fishing rigs to better target the 95% of fish near the beach which generally weigh one to three pounds.

Depending on the time of year and conditions, the number of species available to catch in this size range may be a handful to a couple of dozen but the general size of the fish accessible from the shore is about the same year-round. Fortunately, it seems most beginner anglers prefer seeking quantity “I just want to catch something”, rather than quality “I want to catch a big …” 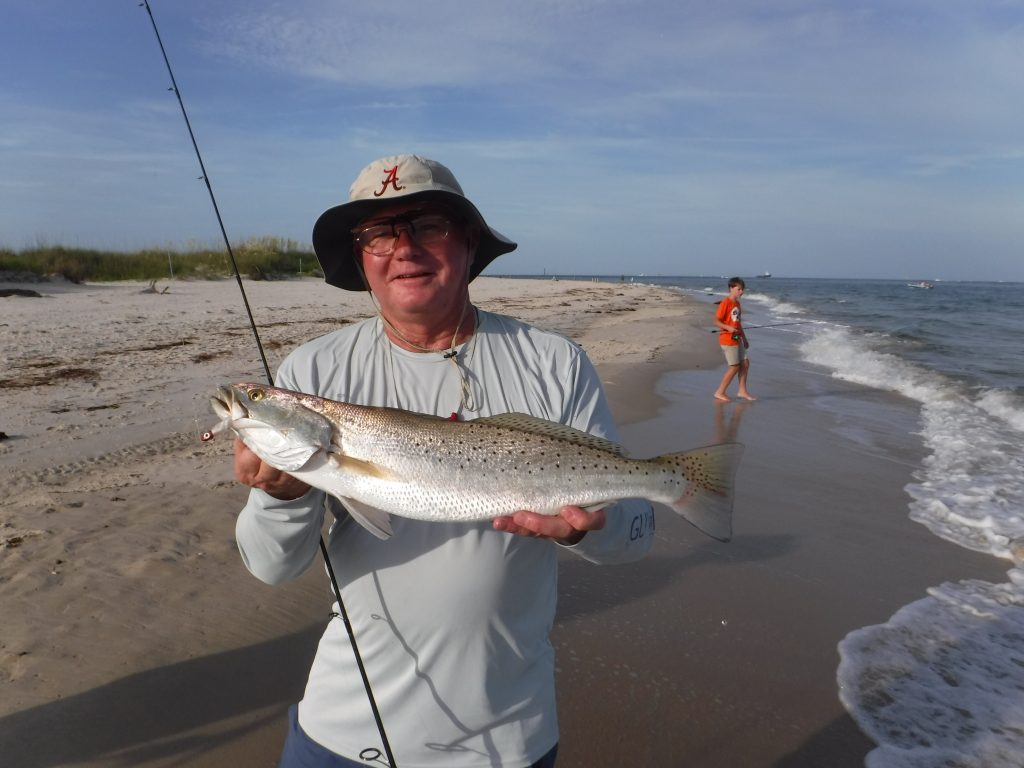 Even many experienced Emerald Coast surf anglers are more intent on catching species they can target for the table as much, or more than for sport. The good news is there is enough variety and volume of fish to please just about everyone all the time.

Pompano are by far the most sought-after species by surf anglers along the Emerald Coast. And rightfully so. They are available all year and are both great gamefish and great table fare, even though they do not commonly exceed three pounds in weight. In the early spring they are arguably the most plentiful gamefish in the surfzone east of Mobile Bay. While west of Mobile Bay, spotted seatrout seem to fill that niche. Though methods to target either are quite different, there is a good bit of overlap in their range and what they might eat, and the surf fishing gear they be caught with.

Though many are caught on live shrimp and croakers, speckled trout are best caught by plugging medium-class tackle along the shoreline. In fact, wade fishing and throwing lures (plugs, spoons and jigs) into the surf seems to be the preferred method to target ‘specks’ along most of the Alabama coast and places westward.

Pompano, on the other hand, are most often targeted in the surf with baited set rigs on rods 7 to 12 feet long. These are weighted double dropper rigs, often adorned with brightly colored plastic beads or pieces of styrofoam floats. The “ready rigs” are available by brand name online, or at the big box stores like Walmarts and Bass Pro Shops.

There are also a plethora of regionally produced “Pompano Rigs” available online and in bait & tackle shops along the coast for just a couple of dollars more. These can be more effective at times just because of the attention to detail when they are hand-tied. All are most often baited with shrimp or other natural baits, and perhaps enhanced with a scented synthetic bait like Fishbites. 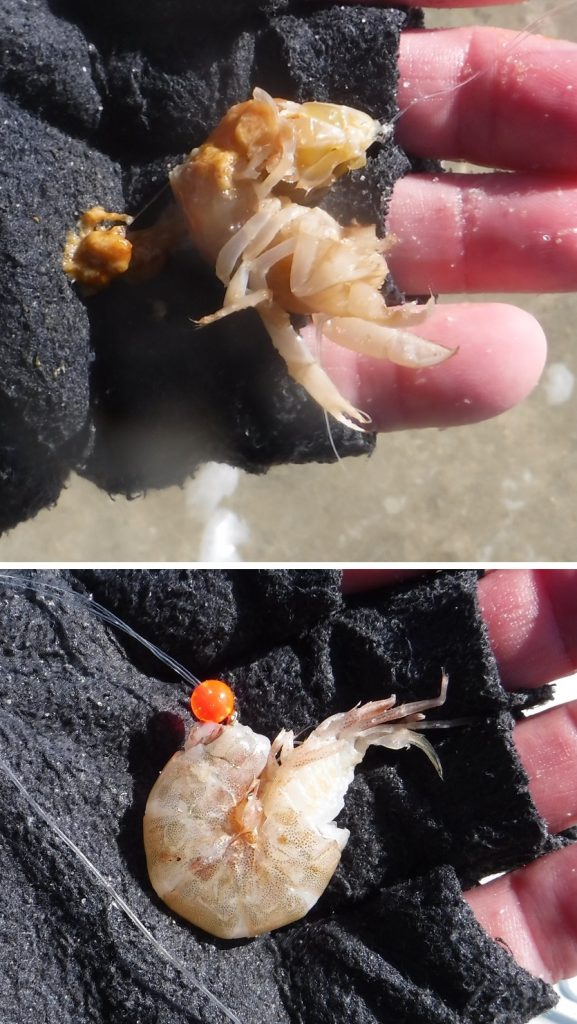 Fishbites is manufactured in St. Augustine, Florida and has been around for over 20 years. Though more widespread used along the north central Gulf Coast, usage  has been ramping up over the past 10 years along the Florida Panhandle to Baldwin County Alabama. The odd thing is its lack of popularity west of Mobile Bay. This despite it being just as effective for Southern king croakers (locally called ground mullet), as it is for the Northern and Gulf kingfish (whiting) to the east.

It is a real “game changer” as far as getting a durable bait out to hard-to-reach pompano, white trout, croakers, redfish or black drum. And it comes in such a variety of styles, colors and flavors that it has a great appeal to many fish species. In fact, the by-catch at times never ceases to amaze even experienced anglers.

Matthew Isbell, renowned coastal surf guide and successful video blogger is better known as the Bama Beach Bum. In a recent interview he stated that Fishbites is essential for beginning as well as experienced surf cast anglers.

“I highly recommend it to my customers.” he said. “I mean, I just don’t see how surf fishermen can be successful, or were as successful without it. What did everyone do before it was invented?” 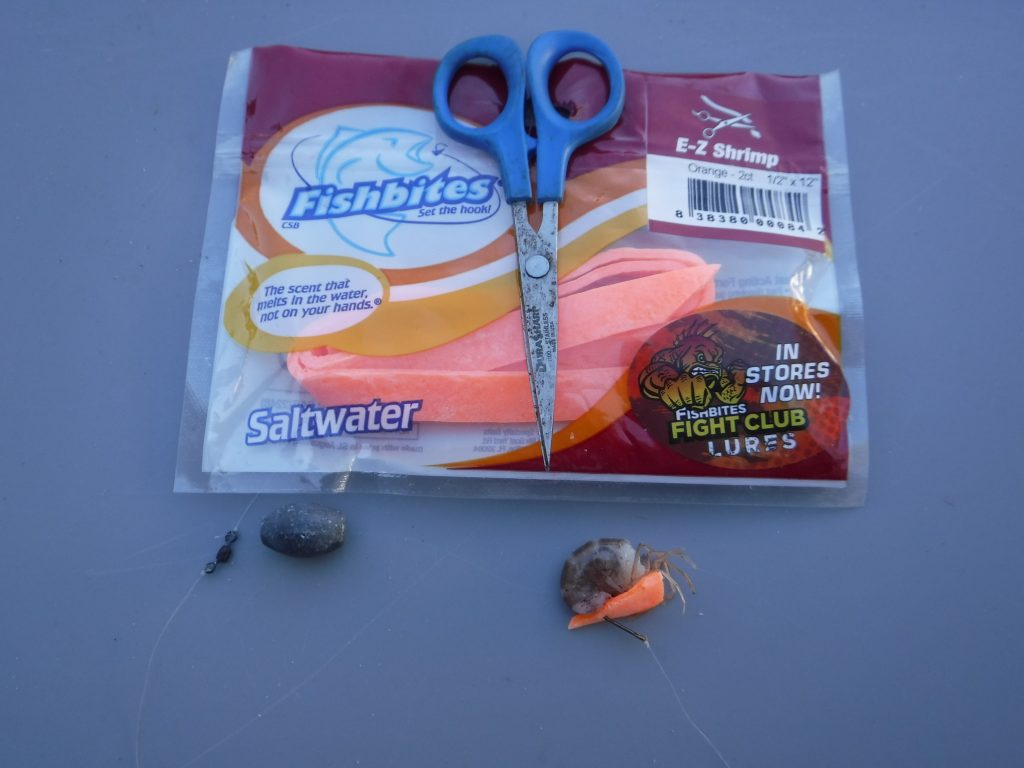 Fishbites rigged with a piece of fresh shrimp is an easy but effective combo.

When asked about preference of styles and flavor of Fishbites, Isbell did not hesitate.

“Easy Flea Is the best all-around for us.” he said emphatically.  “Usually, we put a small piece on the hook with a small piece of fresh dead shrimp. But there are times, mostly in the late summer to early fall when we use JUST Fishbites on the hook. Man, how convincing is that?”

Putting his “money where his mouth is”, a couple of years ago Isbell filmed a series of videos in which he caught fish for five days straight using JUST Fishbites. That says a lot in an area notorious for calm, clear water and finicky fish. 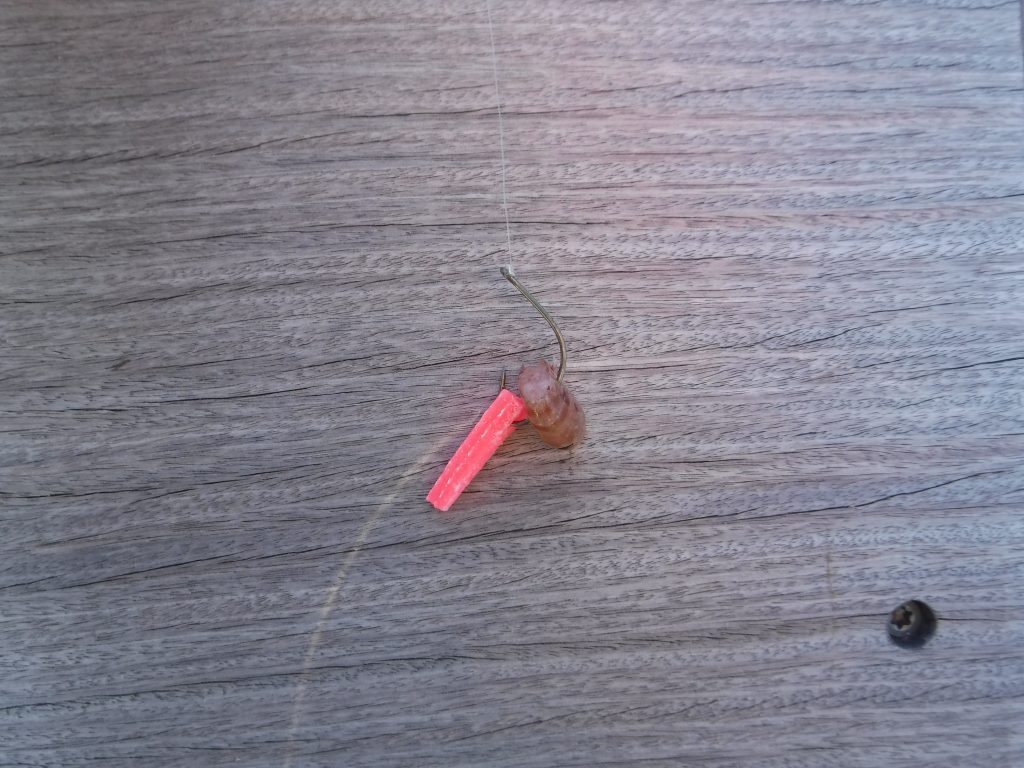 Fishbites with a piece of fresh shrimp on a kahle hook is quite effective.

Sometimes it seems amazing we ever catch much of anything while surf fishing. Especially in winter time when the water is relatively cold and the fish may be lethargic. Sure, finding a good area that holds fish is imperative to being successful while surf fishing.

As a student of geography in college, I learned about the difference between “site” and “situation”. Relating that to fishing, site would refer to a specific location on the earth, a “spot” as fishermen often refer to it. Along with the location, weather and tide, grouped with other situational factors, play equally important roles in determining the specific location where the fish will be grouped and feeding along miles of beach. And just as important is when they will be feeding there and on what at any given time.

Then we still have to put the surf fishing lure on the proper terminal tackle into that spot, at the right time (tide phase) to get a bite that bends the rod. Of course, you still have to get the hook into the fish and keep it there while you reel it in. So, tackle is extremely important as well. By the way, that fish might just as easily be a 10 inch “whiting” or a 25-pound black drum. So, we have to come prepared, or the whole process can go awry. 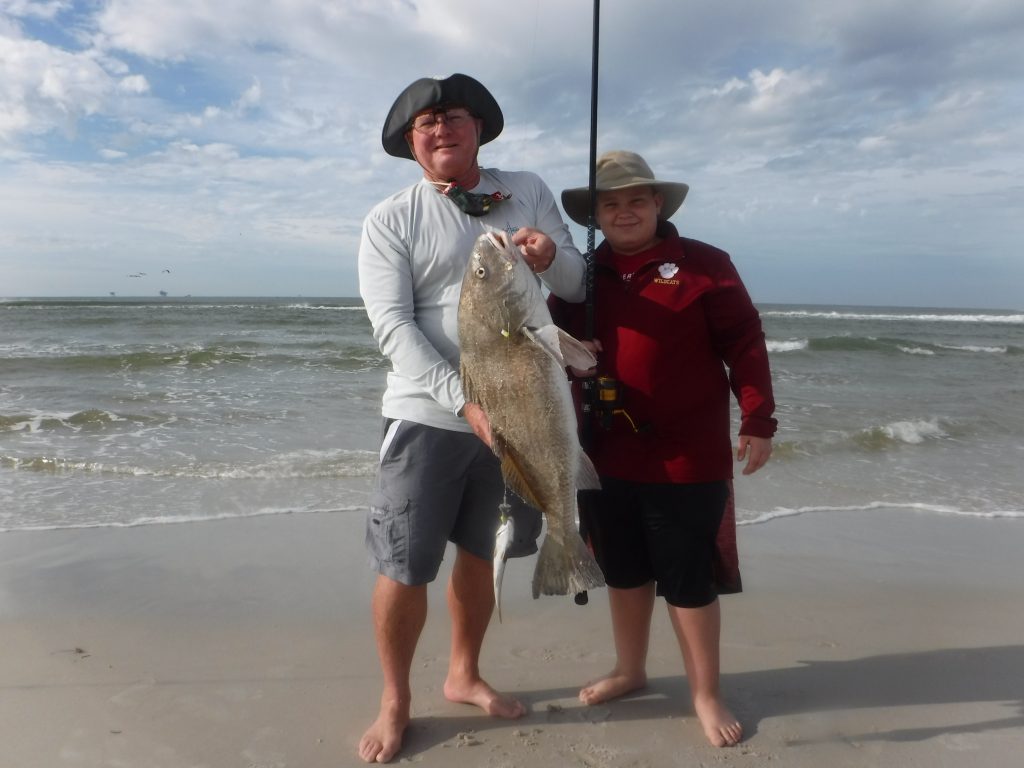 Most spinning rigs suitable for bass or even crappie (6-to-12-pound class) can (at times) be successfully utilized for this near-shore saltwater fishing. With just a little extra care and preparation, your surf fishing cart and tackle investment can be protected from salt water exposure. Especially for a short term. Mostly, just keep the reel out of the sand and saltwater.

The old adage of 10% of the water holding 90% of the fish holds true in the surf zone too. Especially in mid-winter when colder water temperatures slow the metabolism of our native fish. That’s when it may behoove the angler to fish lighter tackle on their surf fishing rod in order to trick these more lethargic and wary fish into biting your offering. By slowing down and downsizing your presentation, you often increase the likelihood of getting less active fish to bite. Besides, it is so much more fun and challenging to fight these smaller gamefish on lighter tackle. 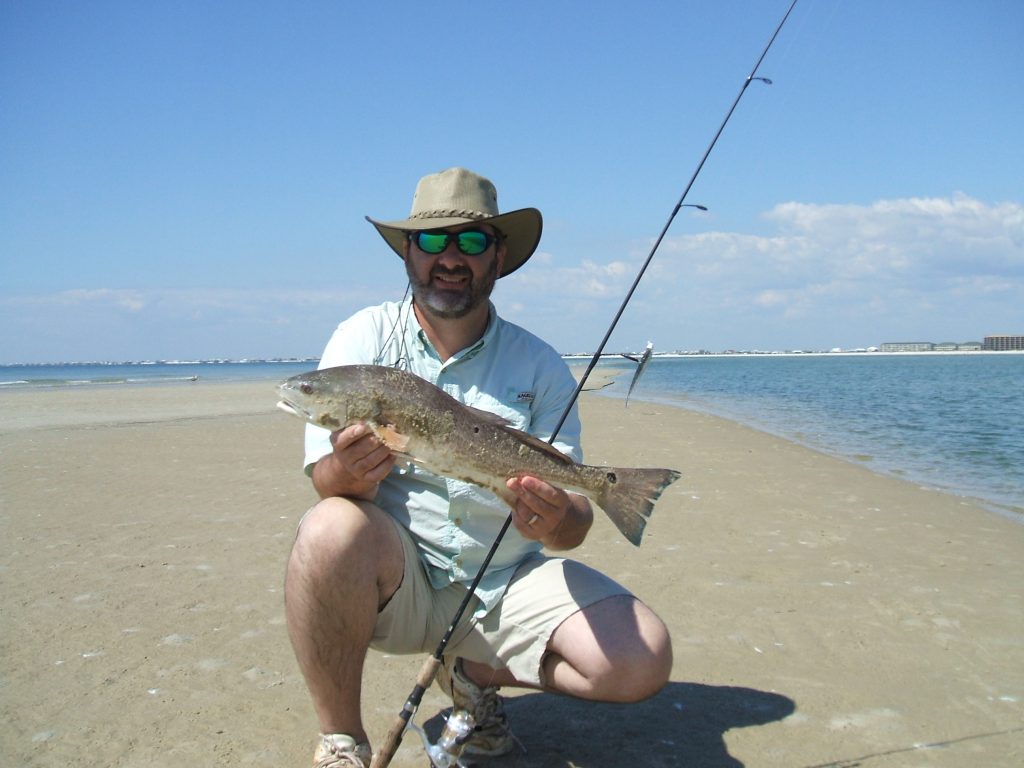 Slot-size redfish fall for a soft plastic minnow on a weighted jighead.

Even larger fish, like red and black drum can be caught on relatively light tackle in the surf. Specifically, because there are usually no obstructions to break the line. All the angler needs is a bit of patience and drag control to wear the fish down. And what a memorable fight a large drum or redfish can make. And there is your trophy