Making the Most of Hunting Clear-Cuts for Gobblers

When it pertains to turkey hunters, perhaps nothing gets to them more than seeing their favorite timber fall to loggers. Arriving at a freshly cut-over stand of woods, as you fondly remember the beauty of those woods, depresses nearly all turkey hunters, myself included.

So, what to make of it? Did the loggers ruin your spot or did they just do you a huge favor creating a more diverse habitat for your birds? In most cases, it’s a little of both and strictly a matter of timing.

Speaking of clear-cuts, I want to share a bit of an exciting turkey hunt I had with my longtime friend David Grimes, of Mobile. David and I met at a cafe near my home in the Monroe County town of Uriah. David loaded his gear into my truck and we drove about an hour north to some prime turkey ground just outside the town of Beatrice.

This property had quite a bit of really nice mature timber and a good turkey population. However, the spot we were heading to was a fresh clear-cut where I had spotted three nice gobblers the previous day. Turkeys were heavily using this cutover as it was nesting season. Fresh gobbler tracks and strut marks were everywhere. 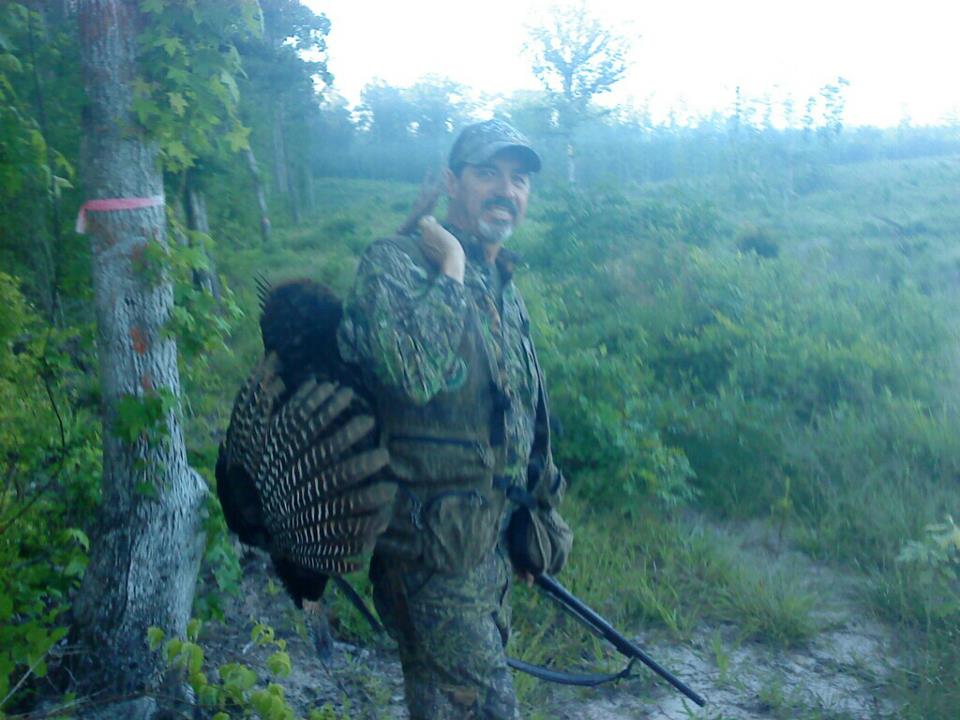 This next morning, I was very optimistic about our chances as we were also blessed with perfect weather. As we gathered our guns and vests to head out to the woods, it seemed David had a bit of a problem. He had brought along his 3-inch magnum Remington 870 turkey gun, but only had 3.5-inch shells in his vest.

As it turned out, that was the only type of shells I had also. I decided to be a real nice guy and offer him the use of my gun while I would call for him. However, David would not hear of it. He said it was his mistake and he would just tag along for the ride and the view. Let’s just say, he got quite a show.

We made our way in the pitch dark down a fire lane on the edge of this cutover to almost the exact spot I had seen the gobblers the previous day. Good hiding spots were abundant along this edge. I settled in against a large pine looking straight down the fire lane with David about 15 steps directly behind me.

As the sky began to lighten up, a gobbler sounded off very close, just inside the woods from the fire lane. This gobbler was no more than 75 yards from us. Another tom began gobbling a couple hundred yards farther down the fire lane.

I made some soft calls to this closest gobbler and he instantly hammered right back. As it lightened up, we heard the turkey fly down and I patiently stared down the fire lane, knowing my tom was likely to show up there.

Less than 10 minutes had passed when I suddenly heard a very loud “putt,” directly behind me. This turkey was so close I was thinking he must be sitting in David’s lap. He putt-ed a couple more times as I sat motionlessly. Finally, David whistled at me and I turned around. He said the tom had been no more than six or seven steps in front of him and ended up spotting him, and that he was a really big gobbler. He ran off very quickly after the series of putts.

Obviously, I was disappointed, but David had a very thrilling experience. We got up, moved about 100 yards down the fire lane where I stopped and made a series of cuts on my mouth call. A gobbler quickly responded just ahead of us. We quickly moved up about 20 yards and sat right back down. Within two to three minutes, the gobbler stepped into the fire lane about 40 yards ahead. I made a nice shot and dropped him in his tracks. Needless to say, we had quite an exciting morning.

I mentioned I had been very optimistic about the hunt that morning. There was a reason this was a prime place. As I said, it was nesting season and this fresh clear-cut was a prime nesting spot. The gobblers will always follow the hens to their nesting grounds as the spring season progresses.

So in this case, the clear-cut was the MAIN REASON for such a great hunt. Is this still a good spot today? Not at all, as head-high pines and thick briars cover up the very spots we were sitting and watching. This is the drawback to the cutting of our turkey woods. Clear-cuts will provide two to three years of benefit to your turkey habitat and then the downturn begins. It will remain poor for hunting until the trees grow enough to be thinned and the undergrowth diminishes.

“The gobblers will always follow the hens to their nesting grounds as the spring season progresses.”

When it comes to hunting turkeys, not all clear-cuts are created equal. The size of the cutover can matter very much. A turkey is much easier to call up in a 10- or 20-acre clear-cut than a 100-acre clear-cut. Getting the gobblers to cross large areas of open ground is always a tough task.

Another thing I look for is a creek or branch running through the cutover or at least along the edge of it. This will most likely be where the birds will roost. That makes picking likely setup spots much easier. Getting in tight to the roosted gobblers makes it more likely you can be calling to them before they are far out into the open ground.

Clear-cuts have their own challenges to hunters as does hunting any open ground. Often turkeys will roost on the edge or along the creek drainages that run across the open ground. These roosted turkeys can see a hunter walking in the open ground for hundreds of yards. To offset this, you must approach your potential setup location in the dark. One plus for this is that loggers normally leave new roads, fire lanes and log landings in the cutover ground. In fact, these log landings will often be the very spot the gobblers will use for strutting zones.

Speaking of fire lanes, many are there because that cutover may have been burned recently. If so, you will find yourself in the best turkey habitat the Deep South has to offer. I have some very fond memories of gobblers I have killed in burned clear-cuts.

The real message here is that the most important aspect of clear-cuts is that nearly all turkey hunters will likely deal with them at some point. Timber is big business in our part of the country. The wild turkeys have learned to adapt to this reality and so must turkey hunters.