Whether they put shivers up your spine or a smile on your face, rattlers are close by when we’re in the woods of Alabama

Rattlesnake!  Simply hearing this word causes fear in many folks, and even the most seasoned outdoorsmen have a very healthy respect for rattlers.  So why in the world would some otherwise sane sportsmen actually hunt these dangerous critters?   I recently visited the City of Opp, Alabama, for some answers.  This small rural community in lower Alabama has often been referred to as “The Rattlesnake Capital of the World.”  For decades, people from literally all over the world have visited Opp to experience the annual Rattlesnake Rodeo.

I spoke with Don Childre, Opp city planner and longtime local snake expert, about his nearly forty years of rounding up rattlesnakes in and around Covington County.  Mr. Childre shared the interesting history of hunting rattlesnakes in south Alabama and how the rodeo came to be.  According to Don, Mr. J.P. Jones is the man responsible for the original concept which led to the event that now attracts thousands of curious participants every year.  J.P. Jones is known as the “grandfather of the rodeo,” and he, along with the Opp Jaycees, organized the first rattlesnake rodeo in 1960.  As the story goes, Mr. Jones was an avid quail hunter who had a number of good birddogs bitten and some killed by rattlesnakes.  Mr. Jones looked for a way to reduce the number of rattlesnakes in the area where they hunted quail.  The idea for a community event started as a publicity effort and fund raiser for the local chapter of Jaycees.  Contrary to popular belief, there never were very many “snake hunters” involved.  According to Mr. Childre, well over 90 percent of the snakes captured for the rodeo are still rounded up by only a handful of dedicated hunters.  “One or two men are responsible for about 97% of the snakes you see at the Rodeo,” stated Don.  “Back in the day, three to four hundred diamondbacks were brought in and there was prize money for the most snakes caught, the largest snake and even the smallest snake.” 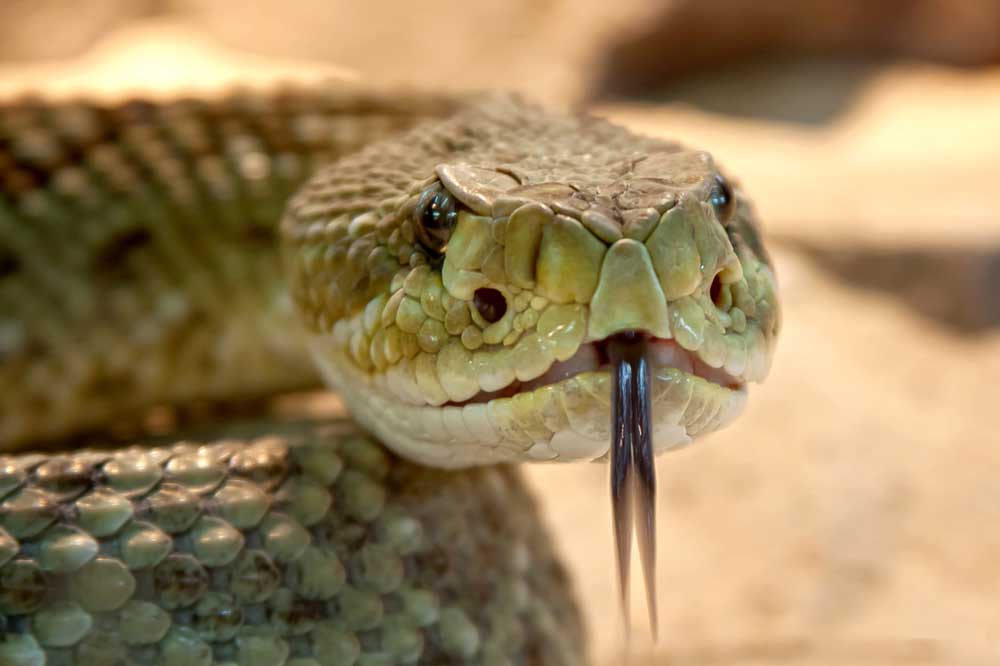 Mr. Childre explained in those days most of the snakes were fried up and eaten.  Cooking the snakes is no longer a practice during the Rodeo events, but this writer can personally attest that fried rattlesnake is some mighty fine eating.  The primary aim of the Opp Rattlesnake Rodeo is no longer to reduce the number of eastern diamondbacks because locals figured out long ago that the rodeo had very little effect on rattlesnake populations.  The main goal of the event these days is quality snake management. According to Don Childre, “We are interested in big snakes.”

The most important contribution of the Rodeo is education.   Many myths are replaced with factual, up-to-date information based on current research and many years of experienced snake handlers who strive to make a positive impact through the Rattlesnake Rodeo.

There have been several contributions to science, research, medicine and conservation spawned as a direct result of hunting eastern diamondback rattlesnakes in south Alabama.  Of course, the most obvious benefit is educating the public about the species.

“The average person often doesn’t realize that a rattlesnake is close by and will walk right past it.  The classic diamond shaped markings work remarkably well as camouflage. “

Crotalus adamanteus is the largest venomous snake in North America and the largest species of rattlesnake in the world.  Its range stretches from southeastern North Carolina to eastern Louisiana and throughout Florida.  The eastern diamondback favors the lower coastal plains found in south Alabama.  The diamondback rattlesnake population in the Deep South is very healthy.  Rattlers have only a few natural enemies such as hawks, owls and hogs.  Habitat loss is the main pressure the snakes are currently facing; however, they are quite adaptable and easily make do residing in populated areas.  The average person often doesn’t realize that a rattlesnake is close by and will walk right past it.  The classic diamond shaped markings work remarkably well as camouflage.  Females bear live young once per year and have a litter with eight to twenty-four babies.  Baby rattlesnakes are “fully loaded” at birth and deadly.  One common theory is based on the belief that a young rattlesnake is more dangerous than an adult because it hasn’t learned to control its venom.  While this may be true to a certain extent, the larger the diamondback, the more venom it holds.

A diamondback will replenish its venom within twenty-four hours after using it during a strike.  Most encounters with rattlers resulting in a person being struck occur when the snake is handled.  Strikes to humans are purely defensive in nature as the rattler knows a target the size of a person is not suitable for a meal.  Rattlesnakes strike people when they feel threatened or cornered.  It is a very bad idea for anyone except the most seasoned snake handlers to purposely disturb a rattlesnake.

The absolute best case scenario when spotting a rattlesnake of any species is to LEAVE IT ALONE!  Move slowly away from the area in the opposite direction of the snake.  Another common misconception involving rattlesnake bites is that the snake has to “coil” before it can strike.  This is not true.  A diamondback rattlesnake can normally extend a strike almost the full length of its body.  Mr. Childre stated he has never been bitten and also noted rattlesnake bites are extremely rare for the professionals involved with the Rodeo.

The belief that rattlesnakes aren’t swimmers is also a myth.  Diamondbacks are actually excellent swimmers and readily take to the water when necessary.  The eastern diamondback normally lives an average of ten years, but have been known to live as long as twenty years.  Most folks believe that you can determine the age of a rattlesnake by counting the “rattles” located at the end of the tail.  Mr. Childre explained the truth about counting rattles on a snake not being an exact science.  Rattlesnakes actually produce a new rattle each time they molt or shed their skin.  This can take place three or four times per year.  Rattlesnakes live and hunt in thick, overgrown terrain complete with greenbrier and other snags such as rocks which frequently break off rattles.  A ten year old rattlesnake could have grown as many as thirty or forty rattles during its lifetime, but it loses many of them along the way.   Older adult rattlesnakes rarely have over fourteen rattles.  The “button” people refer to when describing the size of a large rattlesnake, such as “twelve rattles and a button” is actually a connecting segment where a previous rattle has been lost.

A full grown eastern diamondback rattlesnake grows to an average five and one half feet in length, with specimens over six feet being uncommon.  The typical full-grown diamondback weighs about five pounds.   One of the most common stories concerning rattlesnakes is the report of a giant rattler reaching extreme lengths in the neighborhood of ten feet.   Many photos on the internet have spawned conversations among friends and co-workers about these legendary “monster rattlesnakes.”  The fact is that the largest eastern diamondback rattlesnake truly documented came from the state of Georgia and measured at an incredible eight feet in length!   This snake weighed in at just over fifteen pounds.   This is not something you would want to encounter on a spring turkey hunt. 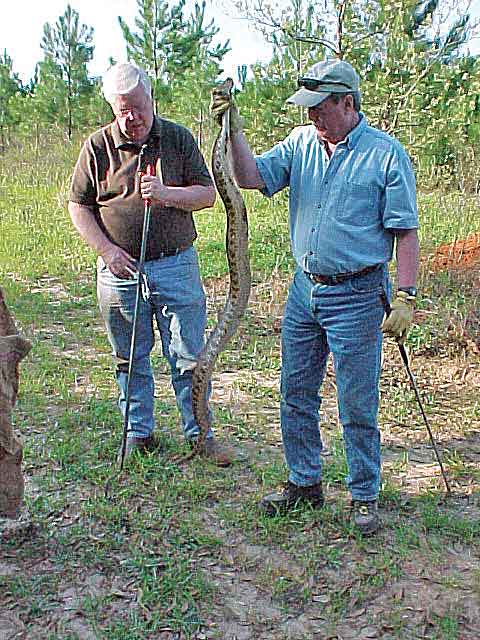 The Opp Rattlesnake Rodeo has made many contributions to science, medicine and research during the past five decades.  Of course, some of the snakes captured are “milked” for venom, which is then used to treat humans and animals when they are bitten.  Mr. Childre explained that milking the snakes for anti-venom requires sterile conditions and is a very exacting science.  A number of different research projects have resulted from the cooperation of the Rodeo, such as studies on a particular parasite which only lives in the lungs of a rattlesnake.   A now retired Auburn University professor conducted a project to study the effects of rounding-up rattlesnakes on the gopher tortoise population due to the outcry of animal rights groups and found the practice to have no measurable negative consequences for the tortoises.  Diamondbacks prefer to use gopher burrows for dens and frequently share the dens with the tortoises.  The use of gasoline introduced through a hose into the dens to collect rattlesnakes was a technique used many years ago and is now outlawed.   Mr. Childre stated that gas has not been used for many, many years.

The method employed by the snake hunters in South Alabama is quite interesting and very effective.  During a snake hunting trip on my family’s Coffee County cattle farm with Don Childre, Ken Howell and the mayor of Opp, Mr. M.D. Edgar, I was amazed at how proficient these long time snake hunters are.  Using a garden hose with a lead weight attached to the end, they can determine if a rattler is in a burrow by listening through the hose.  The hunters then use another hose with a large treble hook attached which has the barbs removed.  The snake is gently snagged and pulled to the surface where it is then handled with short “snake sticks” fashioned from old golf clubs.  The snakes are placed into empty ice coolers and transported to Opp where they are kept in custom enclosures until Rodeo weekend.   The entire experience was exhilarating as well as enlightening.  We knew we had large eastern diamondbacks on the property, but we certainly were not aware of how many big snakes were residing at the farm.  I have become much more mindful when hunting, fishing or working that there are a lot of mature venomous vipers hunting small game all around us. 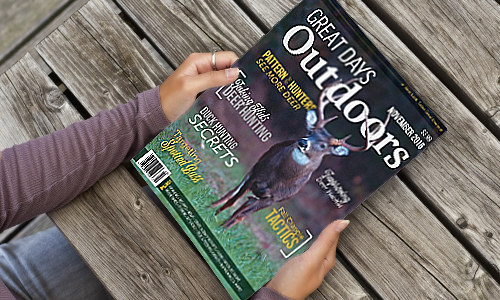