Where do you need to go in Florida to hunt without a quota permit for the spring turkey season?

“In the mid-1990s, residents, and landowners of Holmes County brought it to our attention that their county’s wild turkey population had virtually disappeared,” said Roger Shields, FWC’s wild turkey program coordinator. “Our biologists and law enforcement then set up bait stations throughout the county and monitored them. Those reports were confirmed, and turkey hunting was closed in Holmes County in 1998.”

A turkey trapping and restocking program was initiated during back-to-back winters of 1998-99 and 1999-2000. A total of 121 wild turkeys (43 gobblers and 78 hens) were released at eight different locations within Holmes County over those two years. Local landowners spent their own money on habitat improvements, such as prescribed burns, timber thinning and planting food plots, which helped speed up the restoration process. Additionally, the NWTF formed a local chapter and assisted in turkey trapping efforts.

The restoration goal of re-establishing a huntable population of wild turkeys was attained in 2006 when turkey hunting was opened back up in Holmes County with a limited three-day spring season and a one-bird bag limit. Over the past decade, the spring turkey season in Holmes County has been extended incrementally. Based on harvest data, hunting success in Holmes County is now as good or better than that in surrounding counties. So beginning this spring, the season there will be a full 37 days as it is statewide.

Youth hunters can take part in the two-day youth spring turkey hunt, which occurs on private lands and on 81 WMAs the weekend prior to the opening of spring turkey season. South of State Road 70, that youth weekend was Feb. 24-25. Above S.R. 70 in the rest of the state, that weekend falls on March 10-11. Only those 15 years old and younger are allowed to harvest a turkey while supervised by an adult, 18 years or older.

Spring turkey season south of S.R. 70 always begins the first Saturday in March. This year it is March 3, running through April 8. In the rest of the state, it always opens the third Saturday of March, with this year being March 17 through April 22. 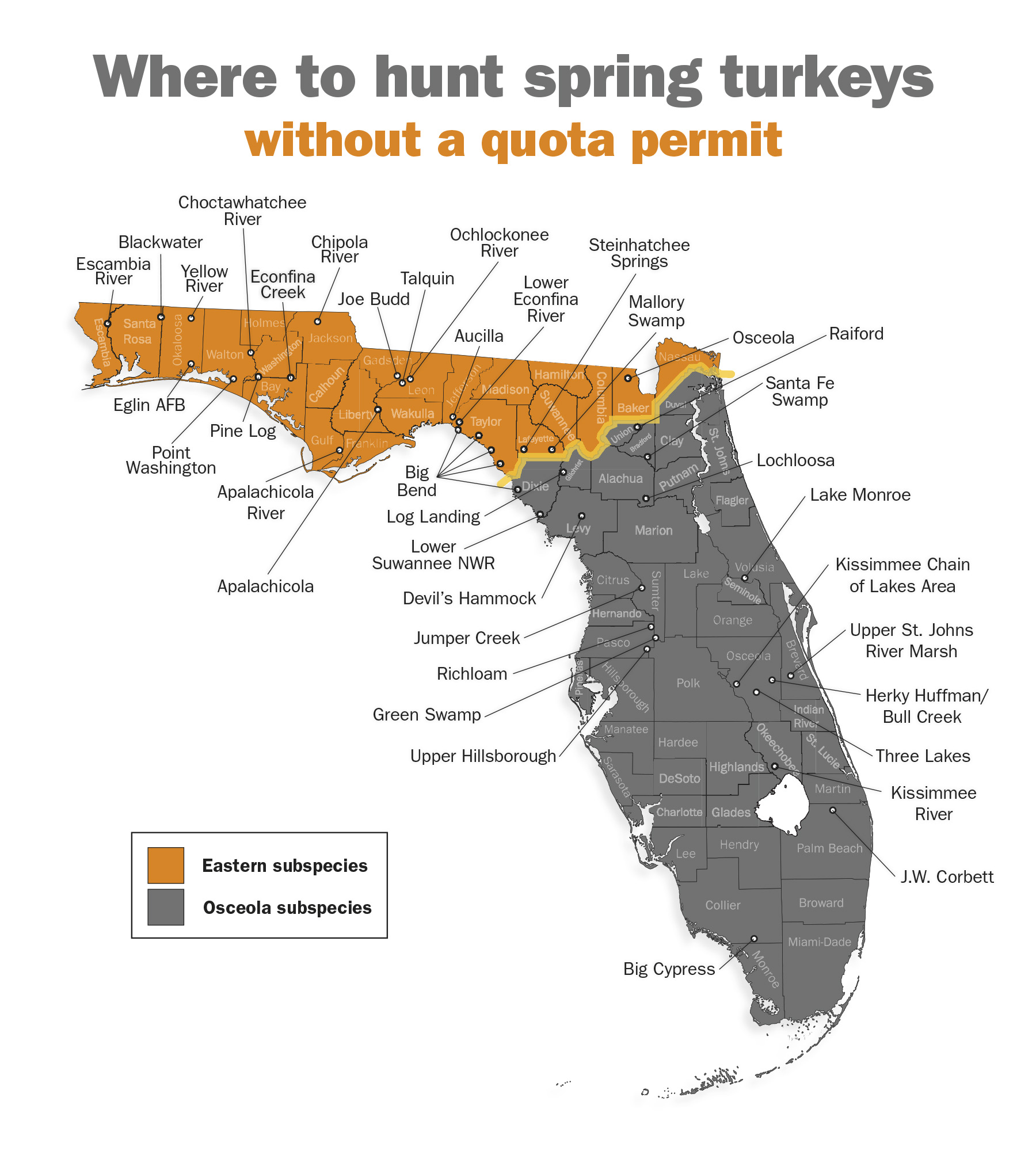 These 43 WMAs don’t require a quota to hunt some or all of the spring turkey season:

Green Swamp WMA – 50,692 acres in Polk, Sumter, and Lake counties.  Hunters must have a quota permit to hunt the first weekend, but there are 200 no-cost, daily quota permits available at the check station on a first-come, first-served basis for the remainder of the season.  Camping allowed only by special permit from the FWC.

Kissimmee Chain of Lakes Area – 21,028 acres in Polk and Osceola counties. Allowed to hunt until sunset. Camping allowed first-come, first-served only at designated campsites. A management area permit is not required.

Kissimmee River Public Use Area – 30,864 acres in Glades, Highlands, Okeechobee, Osceola and Polk counties. The area is split between turkey hunting zones. When hunting south of S.R. 70, the season runs March 3 – April 8. For camping information only, call the South Florida Water Management District at 866-433-6312, option 2. A management area permit is not required.

Raiford WMA – 9,141 acres in Bradford and Union counties. You may hunt without a quota permit April 5-8. Only bows and muzzleloaders (including muzzleloading rifles) are allowed.

Richloam WMA – 58,146 acres in Hernando, Pasco, Sumter, and Lake counties. You cannot hunt for spring turkeys without a quota permit for the first nine days, but those without one may hunt the remainder of the season. Camping allowed only by permit from the Florida Forest Service by calling 352-797-4140.

Santa Fe Swamp Wildlife and Environmental Area – 7,272 acres in Alachua and Bradford counties. Only bows and muzzleloaders (including muzzleloading rifles) are allowed.

Upper Hillsborough WMA – 5,178 acres in Polk and Pasco counties. Wednesdays and Thursdays only. There are 75 no-cost, daily quota permits available at the check station on a first-come, first-served basis. Camping allowed.

Apalachicola WMA – 581,290 acres in Franklin, Leon, Liberty, and Wakulla counties. Camping allowed. A camping permit issued by Northwest Florida Water Management District is required when camping on that portion of the area.

Apalachicola River Wildlife and Environmental Area – 82,975 acres in Franklin and Gulf counties. Camping allowed, but camping permit required if camping in the designated campground. A management area permit is not required. 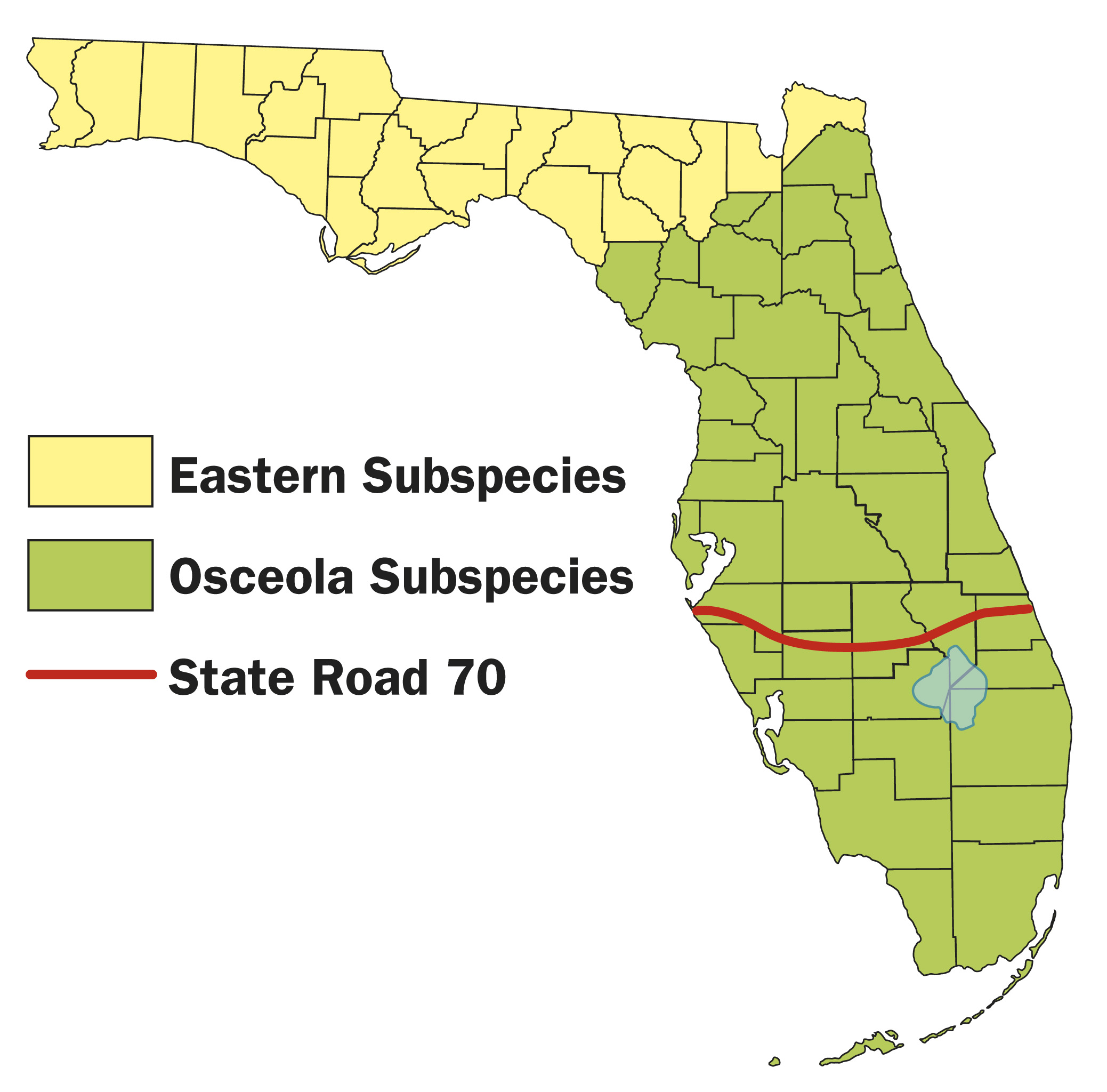 Chipola River WMA – 9,094 acres in Jackson and Calhoun counties.  You may not hunt without a quota permit only at Altha Tract. Camping allowed only at designated campsites by permit from Northwest Florida Water Management District.

Econfina Creek WMA – 41,424 acres in Washington, Bay and Jackson counties. You may hunt without a quota permit after the first nine days, except in the Cat Creek and Fitzhugh Carter areas (where quota permit is needed). Camping allowed only at designated campsites by permit from Northwest Florida Water Management District.

Steinhatchee Springs WMA – 24,382 acres in Lafayette, Taylor, and Dixie counties. You may not hunt without a quota permit for the first nine days, but those without one may hunt March 26-April 8. The Dixie County portion of the area is inhabited by Osceola turkeys.

Talquin WMA – 3,053 acres in Leon County. Saturdays and Sundays only.

Hunters may take bearded turkeys and gobblers only, and the daily bag limit is two on private lands. On WMAs, you may only take one bird a day. The season and possession limit on turkeys is two, except in Holmes County, where it is one.

On private property, any legal rifle, shotgun, muzzleloader, crossbow, bow or pistol can be used to take turkeys. However, the allowed methods of taking during spring turkey season are more restrictive on WMAs. Rifles and pistols are generally not allowed, and shotguns must use shot no larger than No. 2. Check the WMA brochure on the area you wish to hunt to be sure.

“However, the allowed methods of taking during spring turkey season are more restrictive on WMAs.”

Shooting hours on private lands and some WMAs are one-half hour before sunrise to sunset, but on most WMAs, you must quit hunting by 1 p.m.

You can use decoys, but you’re not permitted to hunt turkeys with dogs, use recorded turkey calls or sounds, or shoot them while they’re on the roost, over bait or when you’re within 100 yards of a game-feeding station when feed is present. 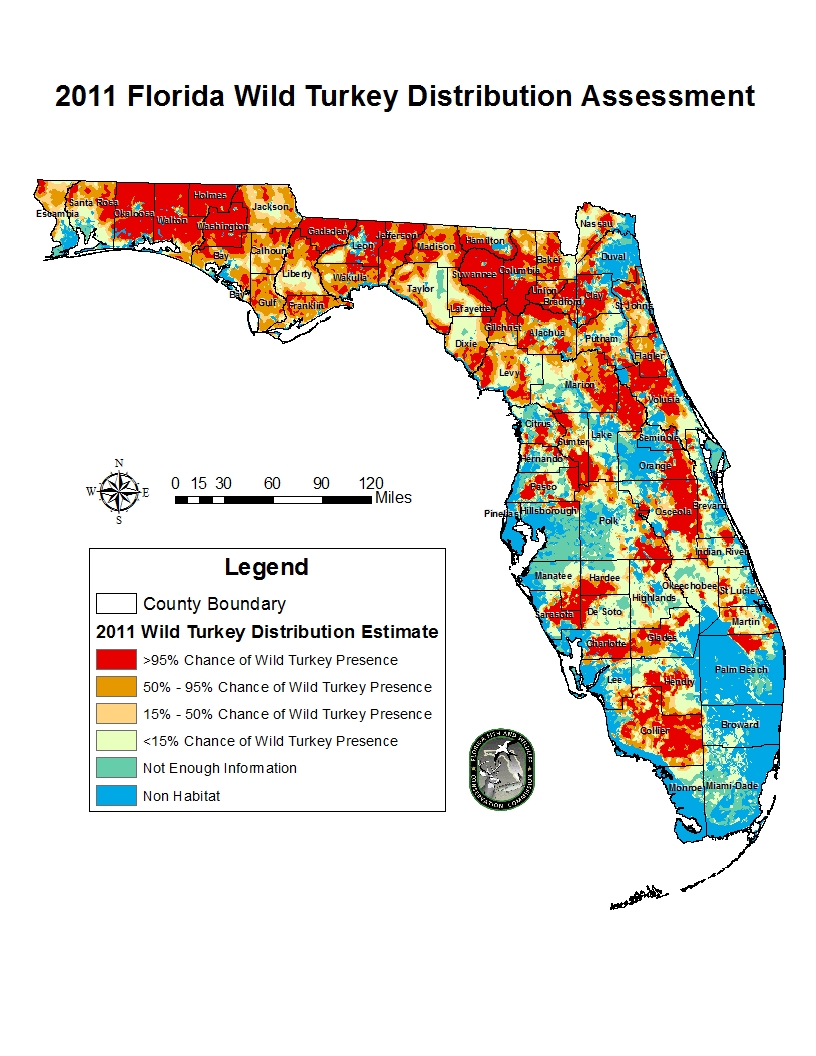 Besides a hunting license, you’ll need to buy a turkey permit. For Florida residents, the turkey permit costs $10. For all the out-of-staters who may be seeking an Osceola to complete their “Grand Slam,” the permit costs $125. And if you plan to hunt on a WMA, you also must purchase a management area permit for $26.50.

These licenses and permits can be purchased in Florida at county tax collectors’ offices and at most retail outlets that sell hunting/fishing supplies, and with a credit card by calling 888-HUNT-FLORIDA (486-8356) or at GoOutdoorsFlorida.com.

During Youth Turkey Hunt Weekend, no license or permit is required of the supervising adult, unless the adult plans to help “call-in” a bird or otherwise participate in the hunt. In that case, the adult will need a hunting license and turkey permit, and if on a WMA, they will also need a management area permit.

Here’s wishing all of you a successful spring turkey season!

Division of Hunting and Game Management

Tony Young
Native Floridian raised up in the Red Hills of Tallahassee. Hunting spokesman for the Florida Fish and Wildlife Conservation Commission and outdoor writer. Avid deer and turkey hunter, has caught 49 bass over 8 pounds and has been known to wrestle a gator every now and then. Nashville recording artist who wrote,“Waitin’ on Tom,” the theme song for the National Wild Turkey Federation’s TV show.