What Makes a Hybrid Striped Bass?

A tribe of hybrid striped bass, all closely related, live in big schools and inhabit big lakes to tempt anglers.

The surface of the lake reflected the colors of the sunrise. All was peaceful, calm, and serene. Suddenly, what looked like small explosions shattered the colors of the sunrise reflected on the water about fifty yards off to the side of my boat. Like mystical sirens that lured ancient seafarers, silver shad bounced from the water only to disappear as they returned to the water. Raucous cries of gulls filled the quiet of the morning. All circling and diving over the exploding surface of the water.

The sudden end of the peaceful morning failed to disturb me because I was suddenly too busy to care. I cast my top-water plug into the middle of the riot and didn’t even have to move it. There was a fight on my hands as my line immediately tightened.

The funny thing was I didn’t know exactly what fish I had hooked. It could have been a white bass or a saltwater striper, or it could have been a hybrid striped bass (a cross between the two). Whatever it was, it was strong and determined not to come to the boat without a fight. 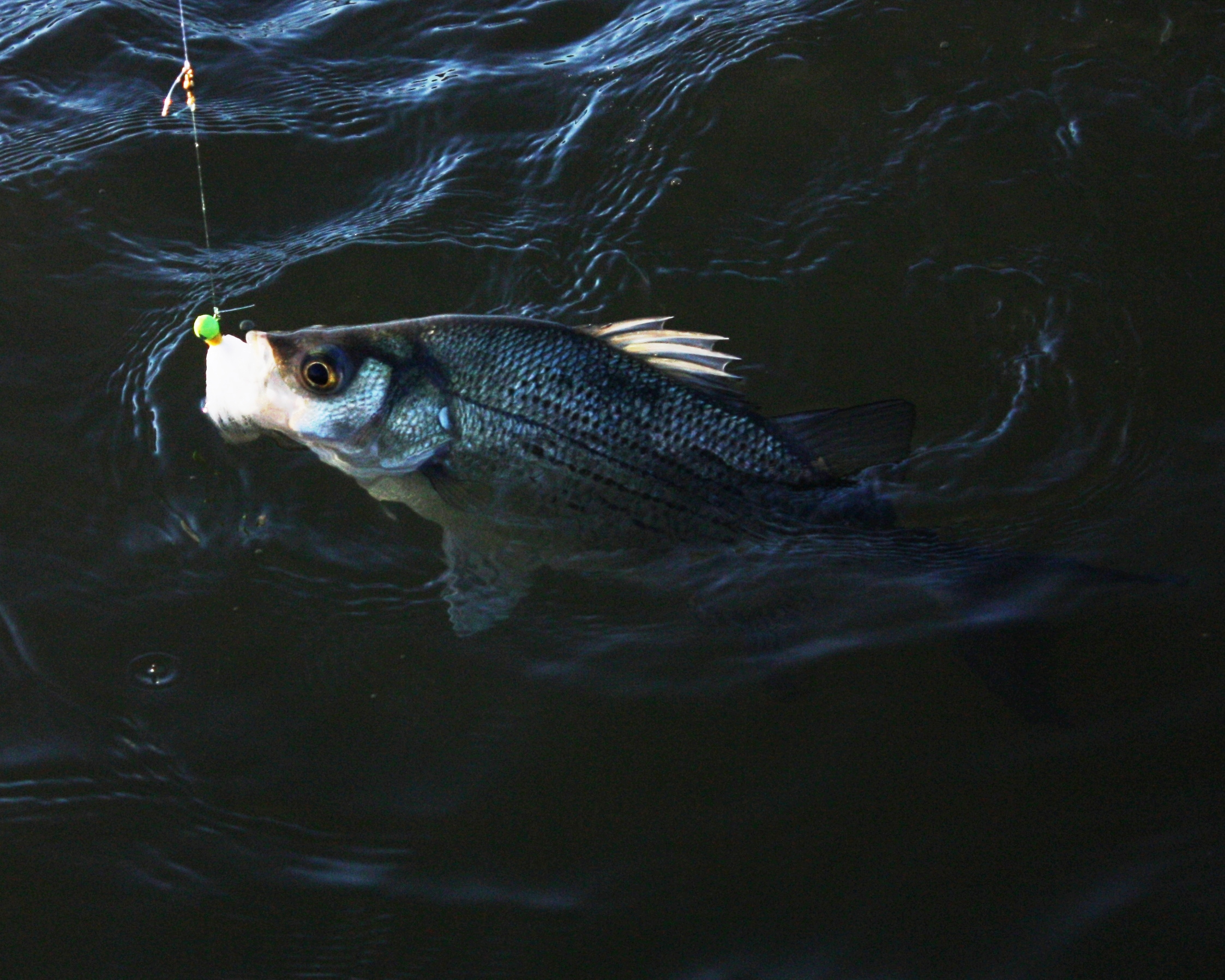 So When Is a Striper Not a Striper?

There’s a lot of confusion on Alabama’s lakes when it comes to labeling these fine fish. After all, they all have stripes. Determining which fish is which comes down to checking a few basic field marks, according to Dan Catchings, District 2 Supervisor of the Alabama Wildlife and Fisheries Division.

The smallest member of the “striper” clan is the white bass. This fish has a pronounced arch to its back, and the dark stripes on the top of its sides become indistinct below the lateral line on the fish’s side. These fine game fish commonly grow to two or three pounds in weight; a five-pound white bass is a good one.

The truth is it can be hard to visually determine just what fish has been caught. In the smaller sizes, identification can be baffling. Dan Catchings says that anglers can check the tongues of caught fish to accurately determine their exact identity. “On the top area of the tongue,” he says, “there will be two separate patches of ‘teeth’ (rough areas that can be felt with a fingertip) in both saltwater stripers and hybrid striped bass. The white bass has only one patch of roughness.”

In Alabama, white bass reproduce naturally in most large lakes, and in Weiss Lake where conditions allow, hybrid striped bass also reproduce. Nearly all saltwater stripers come from stocking efforts by the state.

Which Lakes are Best?

Almost all of the Coosa River chain of lakes has good striper, hybrid, and white bass populations. The Tennessee River lakes also have massive schools of these fish.

“‘These fish have the necessary 80 to 100 miles of upstream river current that allows them to spawn naturally.'”

“Lake Martin and Smith Lake,” he adds, “are probably the best-known lakes for big saltwater stripers. Weiss Lake can be very good for hybrid striped bass due to natural reproduction there. These fish have the necessary 80 to 100 miles of upstream river current that allows them to spawn naturally. Most lakes don’t have this.”

So How Do We Catch These Striped Fish?

As for the basics, it comes down to this: When you want to catch Alabama’s striped fish, first find the shad. Striped fish eat shad constantly, year-round. That being said, once you find the food the fish won’t be far away.

When striped fish are feeding on top, it’s easy. Birds will be working the break areas where the shad have been driven to the top by the feeding fish. Any sort of white or silver top-water plug, jig, or even spinner bait which is remotely near the size of the shad being eaten will work. Sometimes these breaking fish will get spooked and stop feeding. They will drop back into deep water if anglers get the boat too close. Anglers have to get close enough to cast to the fish, but not so close that they spook the fish.

Our buddy, Captain Sam Williams, who has guided on Lake Eufaula for many years, suggests that anglers in this situation tie on a big, heavy popping cork (the kind we use for redfish and specks down here on the coast) and tie a white jig or other smaller lure on a three-foot leader behind the heavy cork. This rig allows anglers to make very long casts to the feeding fish without having to get too close. The popping cork makes noise, which attracts the feeding fish, and the fish find the smaller bait behind. This rig has worked for many years, and it still works today.

When the striped fish are not actively feeding on top, anglers have to rely on electronic gear. “Get in the major creeks and look on the fish finder to detect balls of bait,” says Weiss Lake guide Captain Lee Pitts. “The shad will be tightly schooled up. To catch these deep water striped fish, try vertically jigging a ¾ to 1 oz spoon right through the bait. Drop the lure to the bottom and then hop it just a foot or so off the bottom. The fish will hit on the fall. The fish will be from fifteen to twenty-five feet deep, and they’ll be in the open water chasing the shad.”

Sometimes the fish are mixed up together. However, most of the time white bass will be with other whites. Saltwater stripers will be together, and hybrids will be in separate schools. This probably has more to do with the size of shad being chased and eaten rather than any kind of “disagreement” between the various striped fish.

But Do they Taste Good?

To be honest, these striped fish have a less than tip-top reputation when it comes to table fare. That’s unfortunate because all of these fish, especially the smaller fish (say six pounds or less), are very good to eat.

To make a very good meal, put striped fish on ice immediately after being caught and clean them as soon as possible. Remove all of the dark meat along the lateral line area because that’s where the strong taste comes from. Once you finisheh these things, you can cook the fillets like any other fish. If properly cared for, a striped fish is very good to eat.

Alabama has liberal bag limits for these fish but there are variations from lake to lake.

On Weiss Lake, it’s legal to possess a combination of thirty striped fish, regardless of species.

On Smith Lake and Martin Lake, no more than two of the fish can be over 16 inches in length.