Orange Beach and Gulf Shores are known as beach towns that attract families from far beyond Alabama,  but the area is also an angling mecca, particularly famed for fast action on red snapper during the short but very productive season. While red snapper get a lot of the glory, there’s also great inshore fishing in Orange Beach almost year around.

The beach here sits on what’s essentially an island, with the Gulf of Mexico to the south and Cotton Bayou, a westward arm of Perdido Bay, to the north. Perdido Pass lets out the waters of the Perdido River into the Gulf on the east side, and the Flora-Bama line is minutes away. It’s just eight miles west via the ICW to the vast fishery at Mobile Bay. Gulf Shores is only seven miles down the beach to the west. In short, inshore fishing in Orange Beach is any where you turn.

Cotton Bayou Boat Launch, just off Perdido Beach Boulevard, is a huge, modern launching area in Orange Beach and Orange Beach Boat Ramp, at the end of Marina Drive is another good access point. Nearer Gulf Shores is Canal Park Ramp off Gulf Shores Parkway, which goes into Portage Creek and the ICW.  From that point it is just three miles to the open water of Bon Secour Bay and Mobile Bay beyond.

For those who want to fish Mobile Bay proper, trailering 25 miles west to Pines Public Launch Area and also Fort Morgan Public Launch, both off Fort Morgan Road on the peninsula, will save running time in the boat. 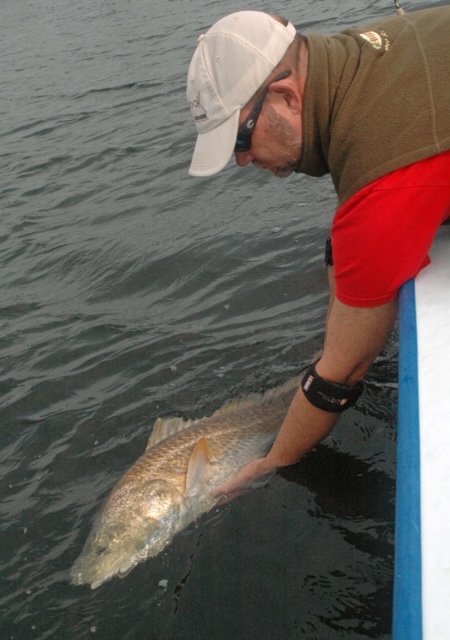 Alabama’s regulations put a slot limit on redfish of 16 to 26 inches with a daily bag limit of three fish.

There’s an assortment of targets when you are inshore fishing in Orange Beach, but the favorite is probably the red drum, aka redfish. The area is a major spawning zone for the species, with big schools of 15 to 25 pound adults moving along the beaches and into the passes and bays starting in October and continuing into early December. While these fish are far above the 16-26 inch slot limit for Alabama, they’re great gamefish that readily take a wide variety of live baits as well as most artificial lures. And because they frequently make their presence obvious, they’re even great targets for flyrodding.

For keeper-size reds, the area has an almost unlimited selection of docks that provide the kind of shade and structure that holds fish nearly all year long. Live shrimp or “LY’s”, scaled sardines, flipped under these docks is the can’t miss combo but reds also readily take the DOA Shrimp, Berkley GULP! Crab and an assortment of jigs rigged with soft plastic tails.

There’s also a pretty good flats fishery for reds throughout the warmer months and anglers pole or drift around sandy cuts, flats edges and oyster bars looking for fish on the move or tipping up to feed.  A gold spoon like the Johnson Silver Minnow in half-ounce size is the favorite for this action especially if you throw it around the fish and crank it back fast enough to bring out the wobble (It’s a good idea to add a snap swivel to the eye of the lure to avoid line twist).

When it comes to sea trout, the area has plenty of big ones thanks to the fertile outflow of the rivers creating a rich forage. The fish are there pretty much year around. 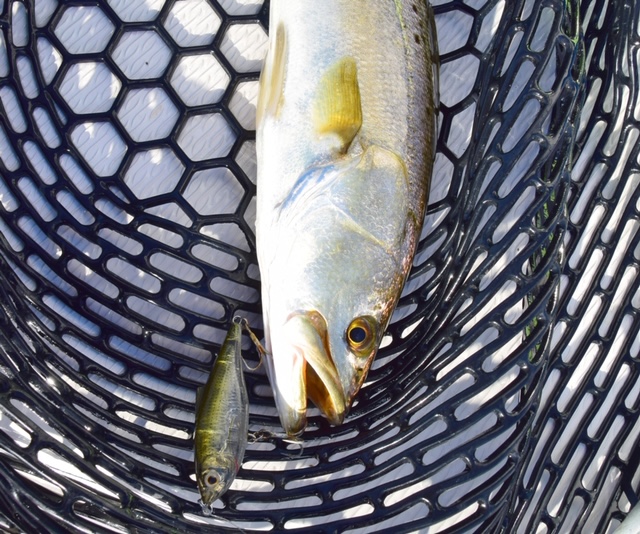 Sea trout can be caught almost year round, using many types of lures, at different times of day.

From April through October, they can readily be caught by throwing topwater plugs around marsh edges and docks at first light, moving out to the edge of the channels and drops and fishing live or artificial shrimp as the sun gets high.

Fall brings schooling action in the open bays, particularly Mobile Bay and look for diving birds and then fish under them with live shrimp on a popping cork. In winter, the fish move inland to the ICW, feeder rivers and potholes in the backcountry, where they’re best caught on live shrimp or jigs eased along near bottom.

You don’t even need a boat to enjoy fast inshore fishing in Orange Beach durning the months of March, April and early May, when schools of pompano run the beaches and passes searching for sand fleas. You can catch these small beach crabs with a wire basket beach rake sold at area bait shops, but the artificial bait known as Fishbites works just as well and it is far easier to get and stays on the hook better. It can be used like cut bait, fished on bottom on a size 1/0 short shank hook, or to add scent to the typical pompano jig, a 1/4 to 3/8 ounce head with a short bucktail or nylon dressing.

November brings the annual flounder run, as the fish flow out of the bays, through the passes to spawn on the nearshore reefs. This is the time of year when a limit of these incredibly tasty flatfish is almost automatic, provided you can find a bait shop with live killifish, also known as mud minnows, in stock. Shrimp will catch some, but the fish seem to find the killifish irresistible. They can be fished on a fishfinder rig on bottom, or hooked on a bare 3/8 ounce or heavier jig and slipped slowly along bottom on the channel edges and around rip-rap at the passes. 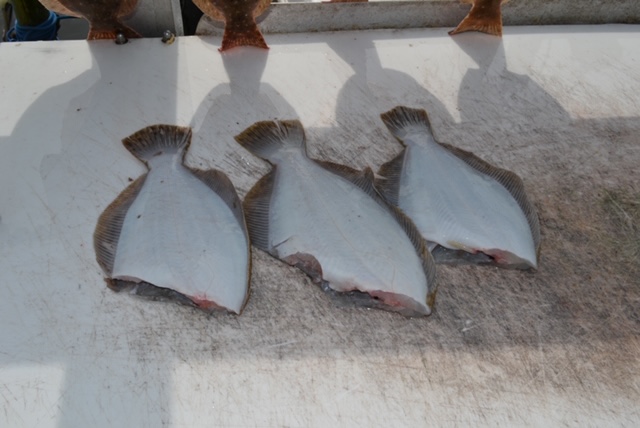 Flounder cleaned and ready for the pan.

Sheepshead also show up in fall, beginning in October and continuing into winter. They can be caught around bridge pilings, docks, riprap, and when it gets colder, in rocky potholes in the backcountry. The largest sheepshead also show up on nearshore artificial reefs and rock piles in March. Fresh-cut shrimp is a favorite bait and anglers should use a piece about an inch long rather than the whole shrimp to avoid the fish from  stealing the bait. Sheepshead also love sand fleas and fiddler crabs.

Whatever the bait, fish it on a small hook, size 1 at the largest and the octopus style works well. A slip sinker and 18-inch leader of 20-pound test fluorocarbon will help you detect the bite (The heavier leader helps prevent cutoffs on their sharp teeth). These are not glamour fish, but they’re on the same plane as flounder when it comes to being table fare which is absolutely delicious.

To make your life easier and less painful it’s a good idea to cut off the sharp spines with kitchen shears before cleaning.

In summary, good inshore fishing in Orange Beach can be found somewhere pretty much year around.

Where to Stay in Orange Beach

The whole area is loaded with resorts so there’s a wide choice of places to stay.

The Caribe Resort offers ample dock space for those who wish to bring their own boat with them on vacation.

The Caribe Resort, just west of the Old Island Bridge in Orange Beach, rents condos from one to four bedrooms, and a big feature is that they have abundant dock space where you can tie up your rig. In fact, these docks, almost right on Perdido Pass, are a very good place to start your trip, inshore fishing Orange Beach, and they frequently hold some lunker reds and trout.

The Wharf Resort and Marina at Orange Beach, just off Foley Express Way, has wind-protected docks on Portage Creek and quick access to the east to Perdido Bay, to the west Bon Secour and Mobile Bay. 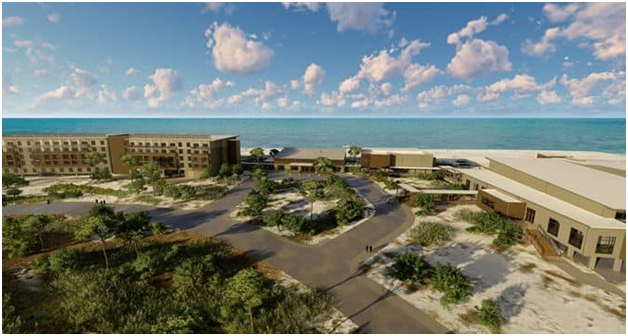 If the family chooses to stay behind while you are out fishing, the Lodge at Gulf State park is right on the beautiful Gulf Shores beach.

The brand new Lodge at Gulf State Park in Gulf Shores is another great place to stay. It’s right on the beach, which will be a big plus with mom and the kids, who can spend their time on the sand while you spend yours in the boat, if that works best for your family. You can’t store your boat in the water here, however. The location offers all the perks of a beachfront location as well as a host of park amenities such as hiking and biking trails, a 900 acre fishing lake, nature center and outdoor classroom, interpretive center, tennis, kayaking, paddleboards, geocaching, guided nature walks, birding, and several playgrounds. If you don’t take your boat, you can catch everything from whiting and pompano to Spanish, kings and the occasional cobia off the public pier here.

Gulf Shores & Orange Beach Tourism has a full palette of places to stay, from luxury resorts to condos to private home rentals, all of them not far from the beaches and the angling action. Visit www.gulfshores.com for details.

This article first appeared in the July 2019 print issue of Great Days Outdoors Magazine. For more great hunting and fishing content for the deep South, subscribe to Great Days Outdoors print and digital editions or click the image to download this issue.