The proper way to introduce a dog to the sound of a gun.

There are many ways to acclimate young gun dogs to loud noises. Many owners start with having metal cans and metal dishes for puppies to play with while getting the pups accustomed to the constant clanging so that sounds are virtually ignored.

The proper way to introduce a dog to the sound of a gunshot is with a distraction. When done correctly, the pup will not only accept the sound of gunfire, but also relate it to birds as a good thing.

We want to begin by creating a birdy dog. I generally use pigeons since they are inexpensive and seem to take to being roughed up by a pup quite well. Take a bird and cut the primary wing feathers short on one side only to prevent it from flying away. Also, tie its two feet together to stop it from running away.

“When done correctly, the pup will not only accept the sound of gunfire, but also relate it to birds as a good thing.”

We now have a bird that will not intimidate even the most sensitive or soft pup. The inexperienced dog should to be on a check cord so we have complete control of the situation. The objective is to get that pup as excited as possible by using an enthusiastic higher pitch voice and lots of strokes of encouragement.

Throw and toss the bird only a few feet at a time so we can be right next to the dog when it picks up the bird. Do not show any emotion if the dog happens to get too rough with the pigeon. The reason being, if we rush in trying to save the bird, the dog will read our body language and begin to shut down.

This will reduce the dog’s bird drive because they think they are doing something wrong. The very best outcome we can observe is letting our pup actually pick up the bird and carry it around. This will ultimately motivate the dog’s interest and prey drive.

This is important for two reasons. It will take a lot of confidence for a pup to pick up a struggling pigeon. Secondly, the dog will be completely distracted to gunfire. As we take our young pups into the field to introduce them to a gunshot, this training session will take two people to put some distance between the dog and the gun. 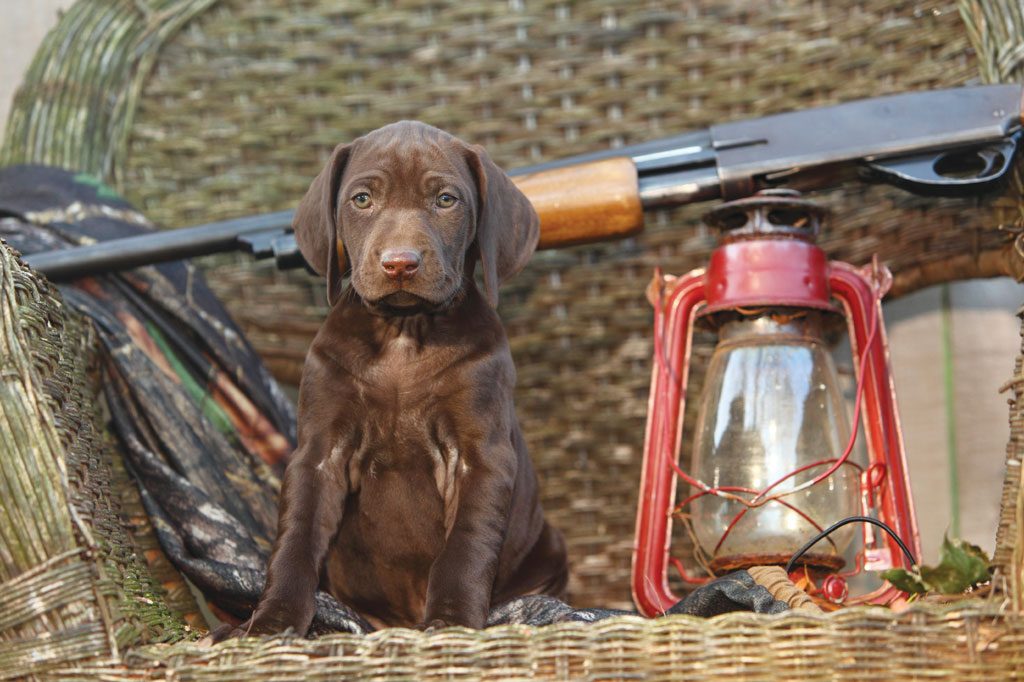 We can initially start out with a larger gauge shotgun with greater distance, but it’s not advisable. Something of a smaller gauge such as a .410, 28 or 20 gauge is sufficient, or even a training pistol. The first gunfire needs to be stationed at least 60 yards from the dog.

As the handler begins to work the dog and bird together, the gunner will be signaled at the appropriate moment to fire an additional shot. Like all training, timing is critical when the signal is given. The gunner will need to shoot the firearm when the bird is thrown and is at its peak height and the dog is running for the bird.

It’s very important for the dog handler to read the dog’s reaction correctly after the gunshot. If there is any apprehension, then the shot is too close. It’s up to the handler to guide the gunner to move in ten-yard increments either closer to the dog or back to create more distance from the dog and gun.

This exercise will create dogs that are ecstatic at the sight of us grabbing our gun and hunting clothes.

(Ben Busby is part owner of a full service upland hunting preserve and a member of Sportdog Brand’s Upland Field Staff. He has trained sporting dogs actively for five years).