A Striper on Fowl River? How Did Siri Help?

I grew up on east Fowl River. In the last 33 years, I’ve fished nearly every point, drop-off, and channel and I’ve never caught nor heard of a hybrid or Striped bass being landed in the estuary. When my life-long friend, Butch Thierry, texted me a photo of a fish he had just landed on his dock, I couldn’t believe my eyes. Here is the story of his once (or I guess twice) in a lifetime catch.

“I walked down to my dock at about 6:30 expecting to catch some Redfish and maybe some Speckled Trout around my green glow dock light.” Butch recalled. After 40 minutes of casting with no luck, he decided to change his lure and give it one or two more casts before heading in for the night. “I tied on 3/8 ounce red jig head and paired it with a white Got-cha curled tail grub with pink tail.” His next cast was one he would never forget.

“On my first cast, I hooked into a good fish.” Thierry said. “I thought it was a nice largemouth bass.” This fish created a problem. Butch had dropped his iPhone in the water 2 weeks previous and was “on probation” with his wife. Part of his agreement was that he leave his phone on the dock table when he was fishing. Butch yelled at the phone, “Hey Siri, call Melissa Thierry!” and he asked his wife to come outside and net his fish. Once she arrived the net was nowhere to be found. Taking matters into his own hands, Butch laid down and lipped the 24” fish that would prove to be his first Alabama striped bass while fishing on Fowl River. 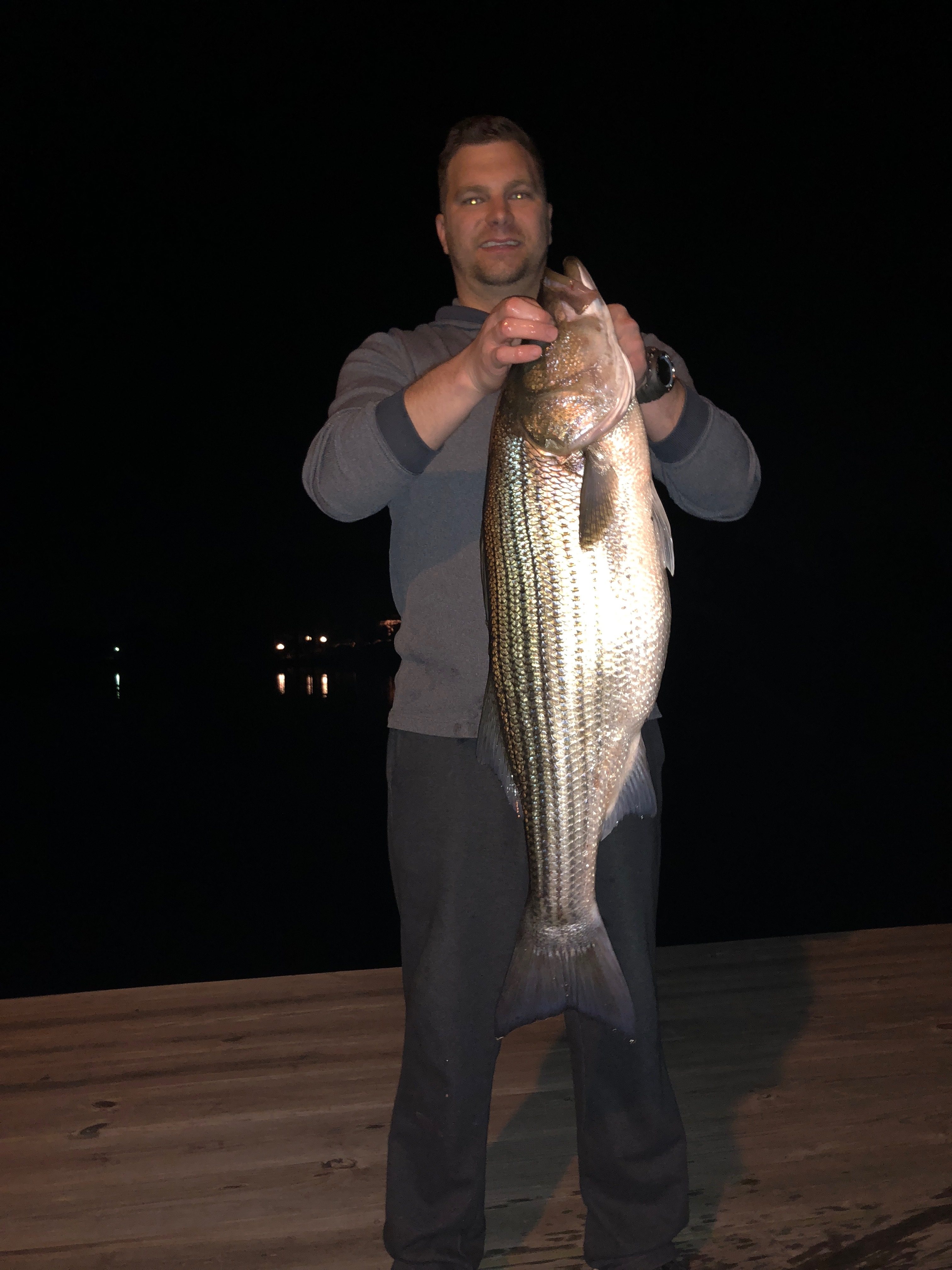 “Having lived in Virginia for 5 years, I was very familiar with Striped Bass. I didn’t know they existed down here and I wasn’t sure if it was even legal to keep them.” A quick search on outdooralabama.com revealed that the size and creel limit was 16” long and 2 fish per person. “I was stoked. Striped bass are delicious.” Thierry said.

“My wife headed back inside and I, of course, kept fishing.” Thierry said. On his very next cast he hooked into a much larger fish. Butch again yelled at Siri, “Hey Siri, Call Melissa Thierry!” This time he told her he had a monster on, and she was once again needed to help him land it. “I ran outside. We found the net earlier and this time I was ready.” Melissa stated. When asked about the fight, Butch recounted, “It sounds cliché, but this really was an epic battle.”

The big fish took out between 70 and yards of line on four or 5 different runs. “I was using a Penn Battle II 3000 combo with Power-Pro braided line and Trik-Fish leader. I was worried about the braid to mono splice because I had to keep tightening the drag to prevent the fish from completely spooling me. She tried to wrap me up in my boathouse pilings two different times and I had to do some creative footwork to keep from getting cut off on the barnacles.”

The 20-minute battle ended with the fish sliding head first into the Frabill net. “Melissa did a really good job. She hasn’t fished a whole lot, and netting a big fish isn’t intuitive, but she came through in the clutch.” Butch said. Once on the dock, the couple couldn’t believe their eyes. They exchanged high fives and hollers in disbelief of the nearly 20# Striped Bass. She taped at 34” long, 20 ¾” girth, and weighed 19 pounds on uncertified scales.

When I asked Butch what he planned to do with the fish, he said, “Number one, I used my foodsaver to vacuum seal around around 10#’s of fillets, so you need to come over for dinner! After we enjoy the meals, I’m planning to have the fish mounted. Who knows if I will ever catch another one in Fowl River. It will make a great conversation piece.”

It’s rather strange that Butch made this catch when he did. He and I have been collaborating on a new podcast called the Alabama Saltwater Fishing Report so this was ironic that we have such a unique report to talk about right around our launch. I hope we can bring the saltwater anglers of Alabama more unique and real fishing report every week to come. 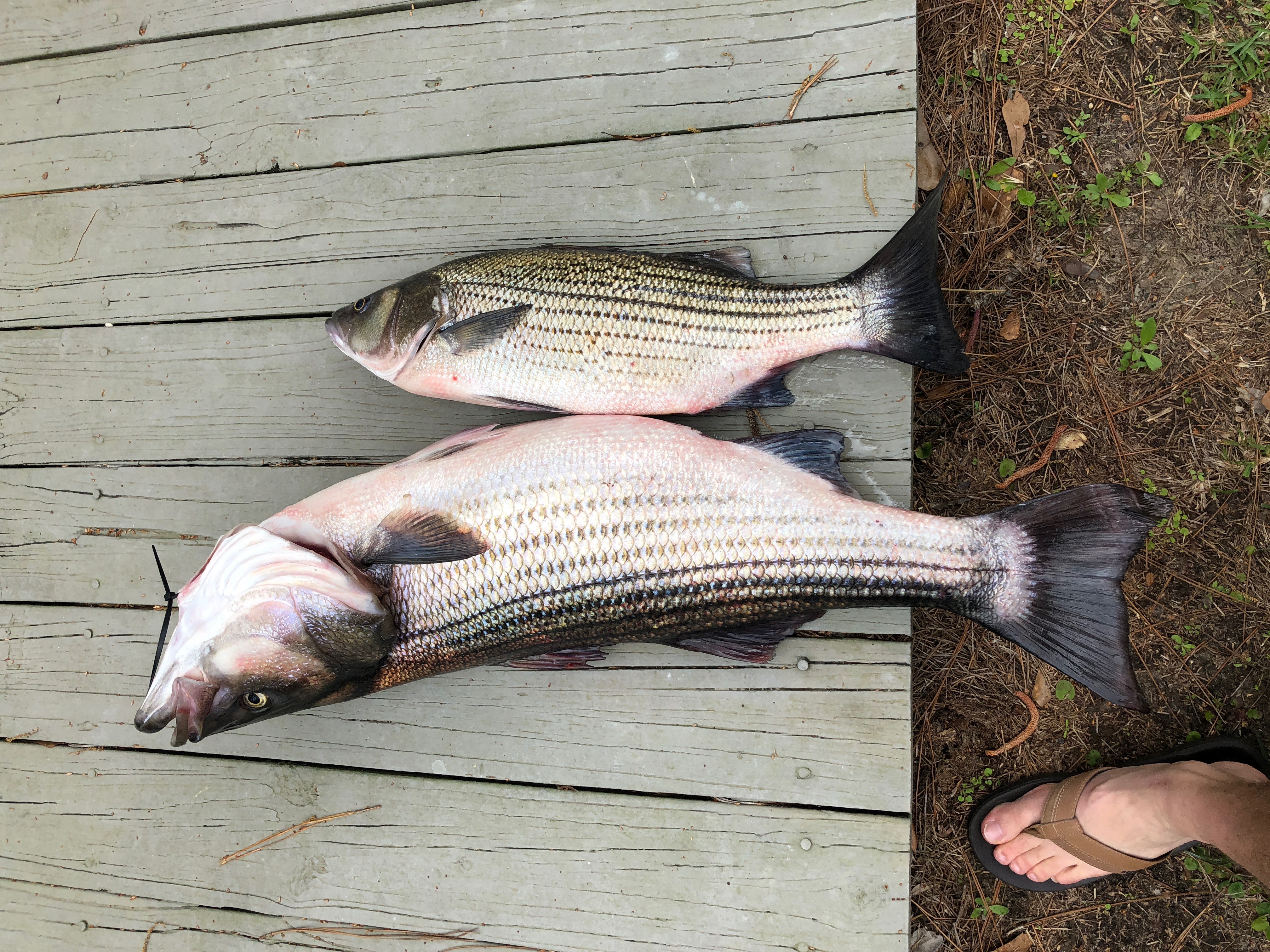