Is Indian Pass the Best Tarpon Fishing in Florida?

I’ve never experienced a scene like this: A football-field-size school of menhaden, baitfish locally called “pogies,” is nervously circling and rippling the water’s surface. Something dangerous below has these pogies upset. The school of bait darkens the water around our boat as the small fish dart and shimmer in the outgoing tide of Indian Pass. And then the school of bait and the water’s surface no more than thirty yards away are exploded as a very large silver fish crashes into the crowd of pogies. Pogies are thrown high into the air, and they splash back into the water where something big and mean is waiting for them. Another pod of bait circles wildly just fifty feet behind our boat, and then a mouth the size of a five-gallon bucket erupts from the water and gulps down some of the pogies. Across the wide expanse of the pass, there are pogies being attacked by large tarpon. This is total water mayhem and carnage. Indian Pass tarpon fishing is some of the best tarpon fishing in Florida, but this is not a good time and place to be a pogie.

But my orange float which has a nice, lively pogie attached to a large circle hook at the end of my leader has been floating peacefully in the midst of this violence and pogie killing action. I’m afraid my poor pogie bait may die of old age and lack of attention. The tarpon don’t seem to be interested in my offering.

And then my float just disappears.

It takes a lot of concentration and restraint on my part to resist so many years of rearing back and setting the hook when a fish strikes. I can’t set the hook when using a circle hook, and I must let the fish itself pull the hook into position in the corner of its mouth and then sink the hook’s point.

So I hold on, my line comes taut, my rod bends over, and then my reel starts to complain about what is happening to it. Line is torn off the reel, and my 50 lb. line hisses as it rips through the water. I’ve never had a fishing line make this sound before.

At this point, the water breaks into thousands of droplets sparkling in the evening sun as a big, a really big, tarpon leaps. Through my shock at the size of this massive tarpon, I remember to bend over and bow to the king as it leaps in order to keep the hooked tarpon from breaking my line or pulling the hook. 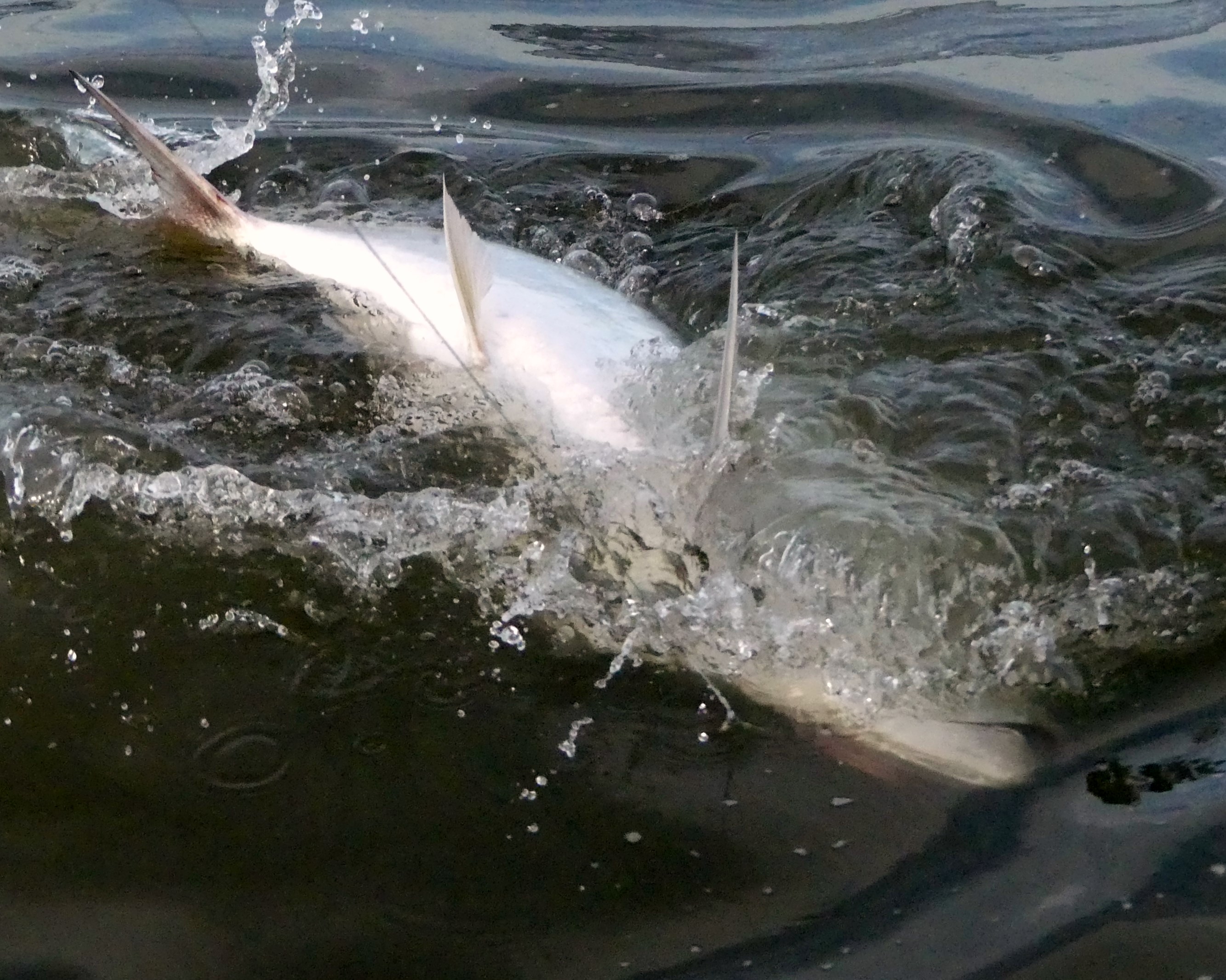 Tarpon don’t give up easily. They fight hard all the way to the boat.

My line rips through the water again as the tarpon makes another fifty-yard run. Again, it blasts out of the water, shaking its head, rattling its gill plates, and then the story ends. Just like that- this fight is over.

The hooked tarpon lands on my line as it reenters the water, and the line breaks. My rod snaps straight up and dead. My line goes limp and dead. I reel in to the broken end.

I’m not sad, and I am certainly not surprised. Many more tarpon are hooked than ever are landed. But I feel as if someone has pulled the plug to my energy supply. I need to sit down.

And all around us, tarpon are flashing in the sun, smashing schools of pogies, and waiting for me to come back and play with another of the big silver fish of Indian Pass. It truly is some of the best tarpon fishing in Florida.

Where this Special Place Is

Indian Pass is the westernmost outlet to the Gulf of the massive Apalachicola Bay system. Each day, millions of gallons of water move from the brackish bay into the salty Gulf with the ingoing and outgoing tides.

To reach Indian Pass and some of the best tarpon fishing in Florida, anglers will want to drive on old Hwy 98 from Panama City to Port St. Joe, which is a short and attractive 35-mile drive. From Port St. Joe, anglers will turn off Hwy 98 East onto SR 30-A which will take anglers a couple of miles to the turnoff at Indian Pass Raw Bar, which is a great location to stop for a platter of oysters and a cold one after a long, hard day’s tarpon fishing. This road leads directly to the boat ramps at Indian Pass. Gorgeous St. George Island lies just across the pass. 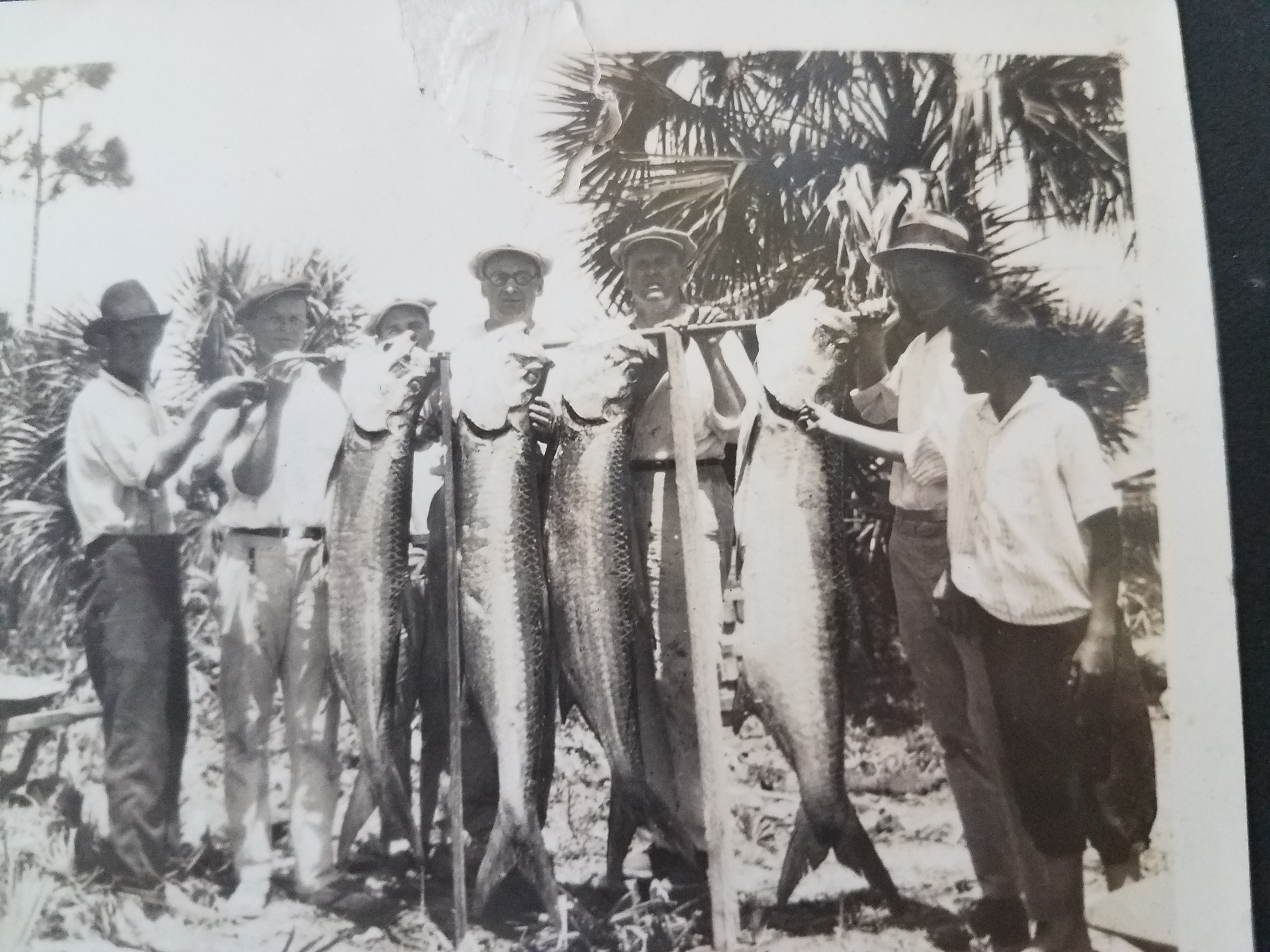 Folks have been coming to Indian Pass to catch tarpon for a long time.

Visitors can find supplies, food, and comfortable places to stay ranging from rustic cabins to beachfront mansions in the area as well as very good local guides who know the Indian Pass area very well.

Folks have been coming to Indian Pass for a long time to do battle with the big tarpon here, but the pass area is never overcrowded with anglers as is the case with many Florida tarpon fishing destinations.

Why the Fish are there and what they are doing

But when the water starts to warm in spring, a major migration of big, hungry, aggressive fish brings the schools of tarpon back to Indian Pass and farther west along the Gulf Coast; making this a go to destination for some of the best tarpon fishing in Florida.

And why do so many tarpon stop and spend their summers at Indian Pass, making it a great destination for some of the best tarpon fishing in Florida?

Local guide Captain Shawn Chalker says,” I think the main reason why tarpon come here is the nutrient-rich water coming out of Apalachicola River which attracts massive schools of menhaden, locally known as pogies. We have miles of pogies during the warm months. We also have shrimp, mullet, and glass minnows to add to the feast. Couple this with the low fishing pressure and it makes the perfect storm.” 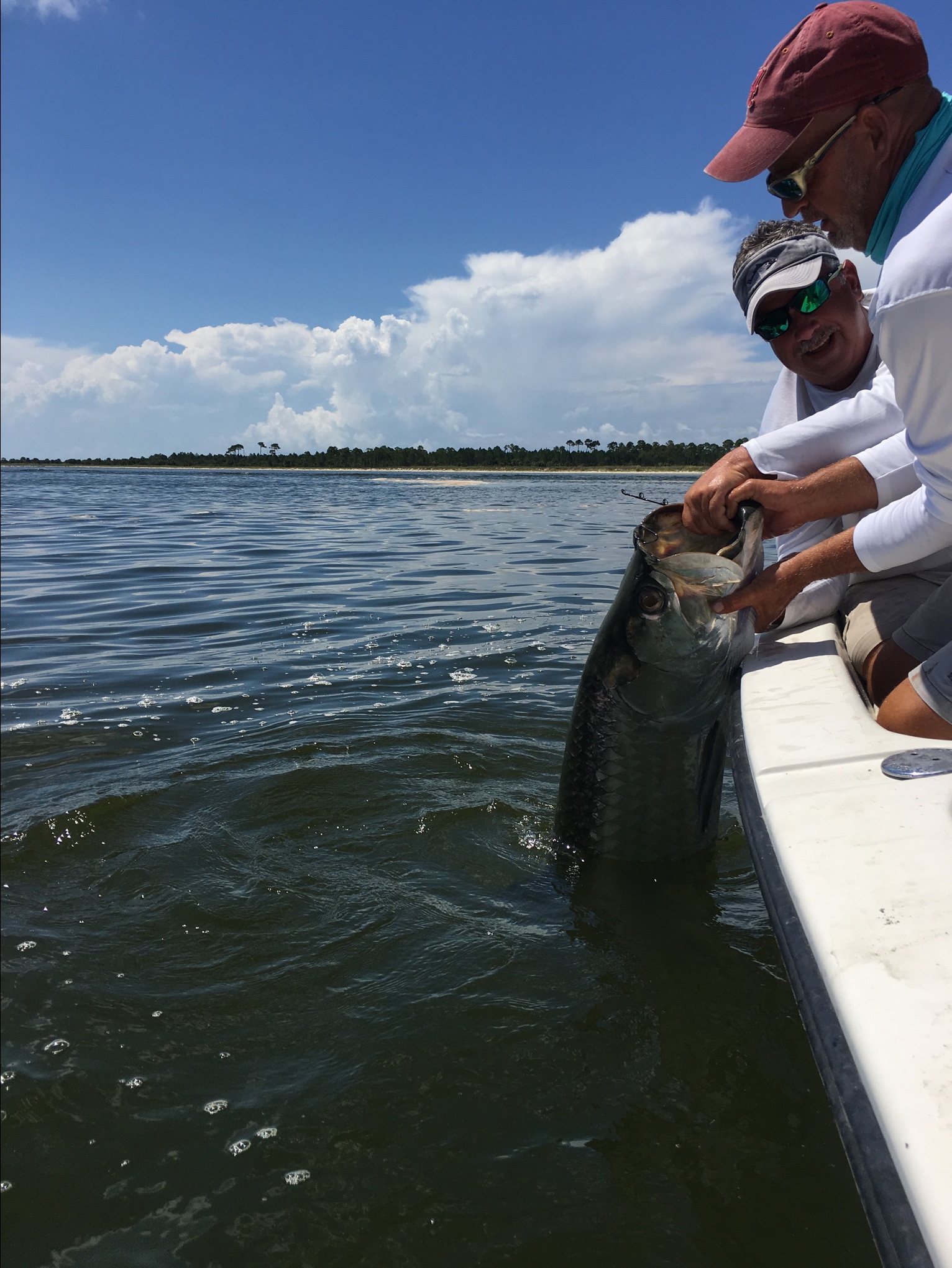 Tarpon must not be removed from the water and into the boat when being released.

This being some of the best tarpon fishing in Florida, anglers can expect to find some very big tarpon at Indian Pass. Captain Shawn tells us,” The average size of our fish is between 80 to 100 pounds with 200-pound fish fairly common. My personal best fish is a 240 pounder measured by length and girth calculations, and I really don’t want to catch another one that size. We do see fish larger than that, but they are a whole different animal. In the past few years, we have seen an increase in fish in the forty to sixty-pound range which are a lot of fun to catch. The smaller ones are usually more acrobatic.”

How to Rig and Fish for the Big Silver Fish

Some big tarpon have been caught in the Indian Pass area on quite light tackle, but this doesn’t often happen, and to be honest, trying to catch tarpon on gear that is not designed for big, strong fish is hard on the angler, and it’s hard on the fish. It’s much better to use gear which is strong and heavy enough to work the fish to the boat in a reasonable period of time so it can be released in good shape for survival. 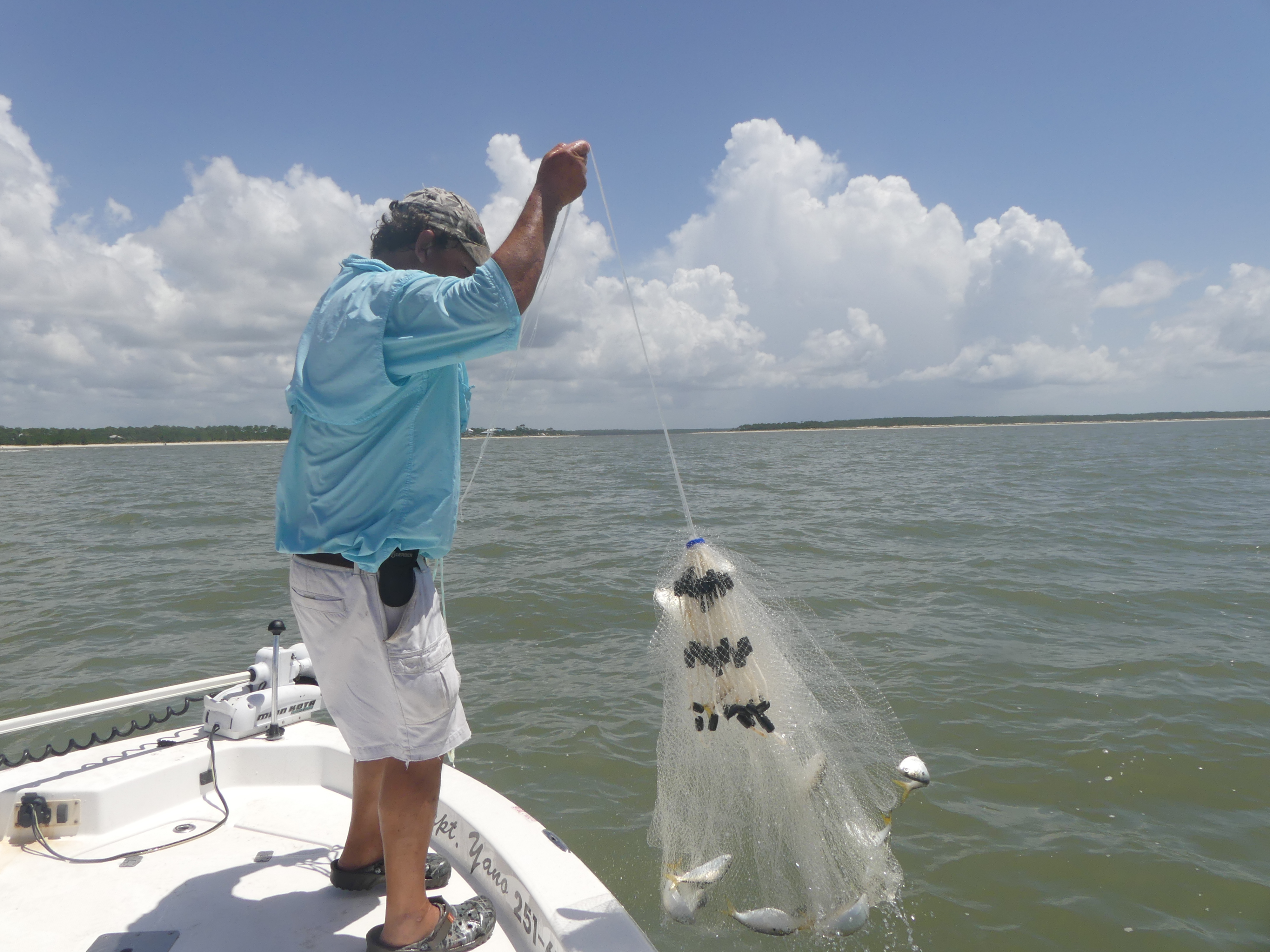 Anglers need to gear up for some of the best tarpon fishing in Florida and Captain Shawn Chalker suggests,” AS far as equipment for tarpon, I use a 5000 series Penn reel with a St. Croix Heavy Action eight foot long rod for throwing swimbaits. This rig is spooled with 40 lb. braid and a 60 lb. fluorocarbon leader at least three feet long. For dead and live bait, my rods are seven foot to seven and a half-foot 20-30 lb. rods with a 6000 series reel spooled with 40 lb. braid. I use conventional reels such as Penn 320 or Shimano TLD 15. On the live bait rods, I use a four-foot leader with a ball-bearing swivel and a number eight Owner circle hook. In clear water, I use 60-80 lb. fluorocarbon leader, but in stained water, you can get away with 150 lb. mono leaders.”

Indian Pass tarpon will bite on a range of anglers’ offerings. Captain Shawn gives us some good advice. He says,” The most popular method of catching them is drifting dead pogies through the schools of bait or live baiting them in the passes. I have done really well throwing plastic swim baits and hard baits in clearer water, but you need to be very careful with treble hooks. Treble hooks and 150-pound fish are not a good combination. Rapala and a few other companies are making hard baits with a modified circle hook that works really well. The only problem with heavy artificial baits is the fish will throw them back at you, so you end up jumping a lot of fish but catching only a few of them.” 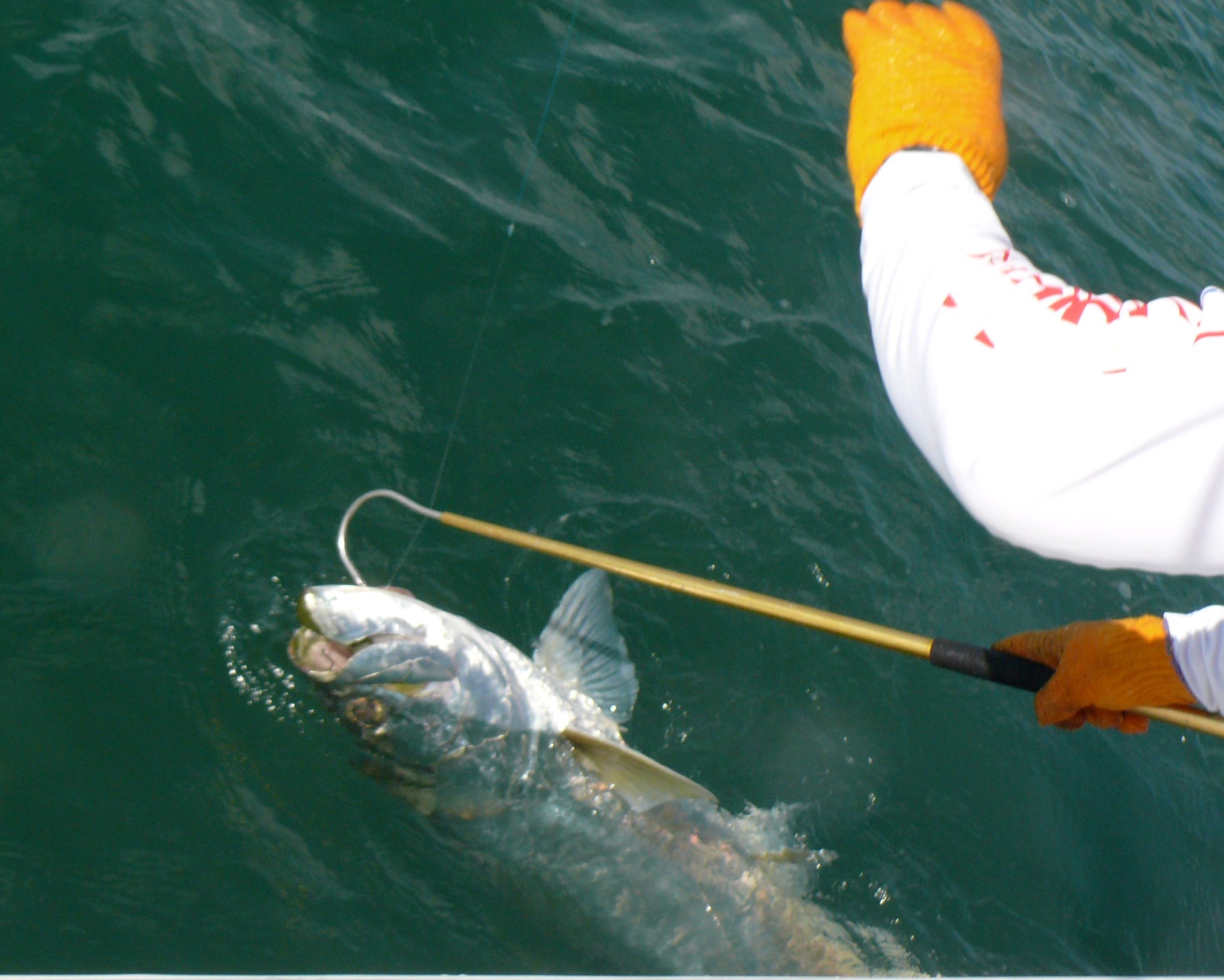 When it comes to finding the actively feeding tarpon, anglers in the Indian Pass area need to look to the sky for help. Captain Shawn explains, “The best way to find them is to find the pelicans diving and there is probably a wad of fish pushing pogies to the top. That is a good thing about tarpon: they will usually let you know where they are by either rolling gulping air or busting bait.”

Some Things to Keep in Mind

For anglers new to some if the best tarpon fishing in Florida at Indian Pass, there are some things to keep in mind, and Captain Shawn Chaulker has some very good advice. He says,” I think the biggest mistake I see people make is not putting the time in. You have to stick with it and sort through the sharks and catfish. They are all eating the same thing, so as long you are seeing fish, stick with it. They will eat eventually. When you stop seeing fish, move. They are feeding somewhere. Another mistake I see is people underestimating the power these fish have. Nothing compares to the will to live that these fish have. Your gear and knots have to be perfect to get a big fish to the boat. Taking time to make sure everything is done just right will up your chances.” 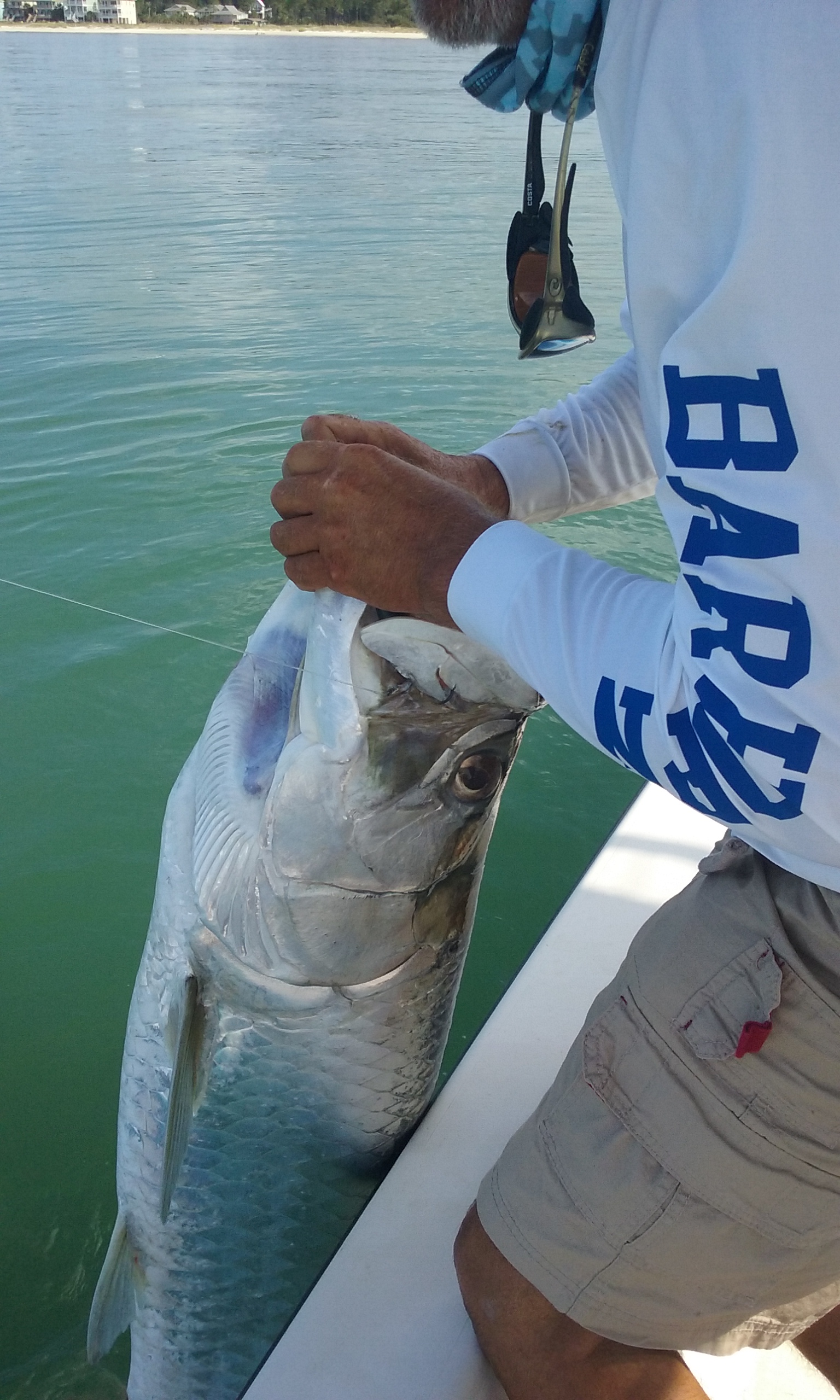 Tarpon must be handled carefully to protect the fish and the angler.

Finally, some good advice for anglers looking for a fight with a big Indian Pass silver king from Captain Shawn. He urges folks new to the area,” If you are not familiar with the area, check your charts very closely. Navigating out of our passes can be tricky. The sandbars outside of our pass move quite a bit, so take your time and get some good marks on your GPS on the way out because it is easy to get out, but coming back in is a whole different story. Indian Pass has lots of great people, so don’t be afraid to ask questions at the ramp.”

And as a final bit of very, very good advice for those partaking in some of the best tarpon fishing in Florida, Captain Shawn says, “When it’s hot, don’t jump in to cool off. We have a very large population of sharks. Fourteen-foot tigers and hammerheads are common, and big bulls are everywhere.” 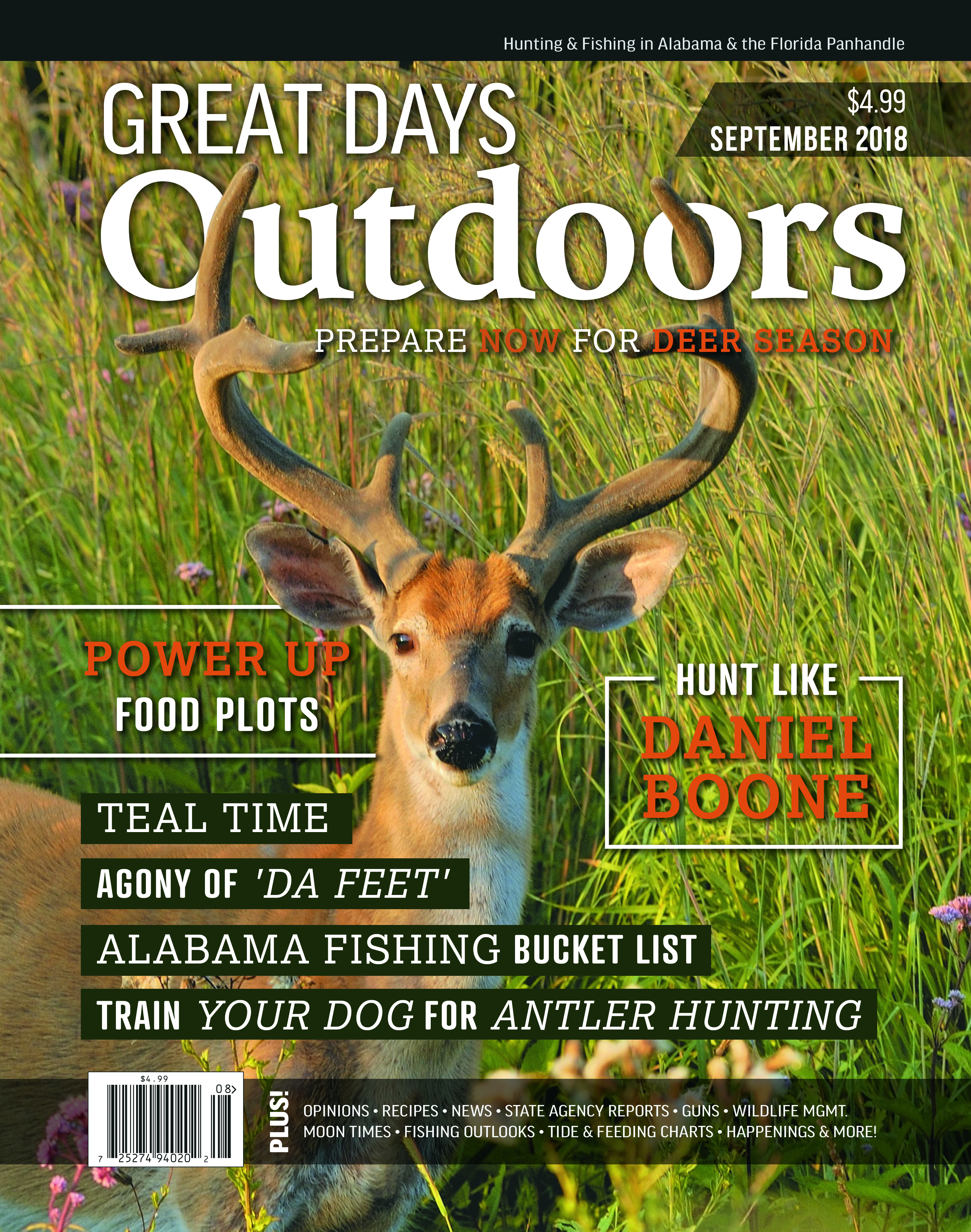