Jugging for Catfish in Alabama Waters

The mist from the water cascading over Bankhead Dam quickly dampened our clothes as we put out our jug set. We were on the Warrior River’s Holt Reservoir fishing just below the dam.

Camping downstream at Burchfield Branch, which is a little more than one mile from the dam, we overslept as usual. It was nearly 8 a.m. before we launched the boat. We used cut up bream for bait, caught and frozen the week before.

Fishing Below the Dam

The water cascading over the dam was turbulent, plus power was being generated on one side of the dam. This created a crosscurrent. And it was windy. A most ideal condition for catfishing. I’m serious. Moving water means feeding fish!

I carry two boxes of 16 noodles each, but today I opted to use only one box. The water was swift, meaning the noodles would get out of the “strike zone” and go downstream quickly. Turns out my wife Judy and I had all we could handle with 16 lines.

We had placed only seven lines when one jumped and started for a large outcropping of rock about 50 feet away. We boated a five-pounder before we had finished putting out our jug spread.

During the next three hours, we landed over 30 catfish in the two- to six-pound range. All were stuffed with shad that had come over the spillway.

We lost another really large fish that wrapped the line around the 50 HP Mercury lower unit before we could turn him. This fish had pulled the foam noodle under several times for nearly a minute each. The noodle would pop up periodically, race across the surface leaving a big V-shaped swath behind, and submerge again.

When we finally managed to grab the noodle line with the gaff, the fish made one circle under the boat, fouled the line on the motor, and was gone. Maybe next time, I thought. Normally, I like to maneuver through the set using the trolling motor. But given the unusually strong current, that tactic proved impossible. 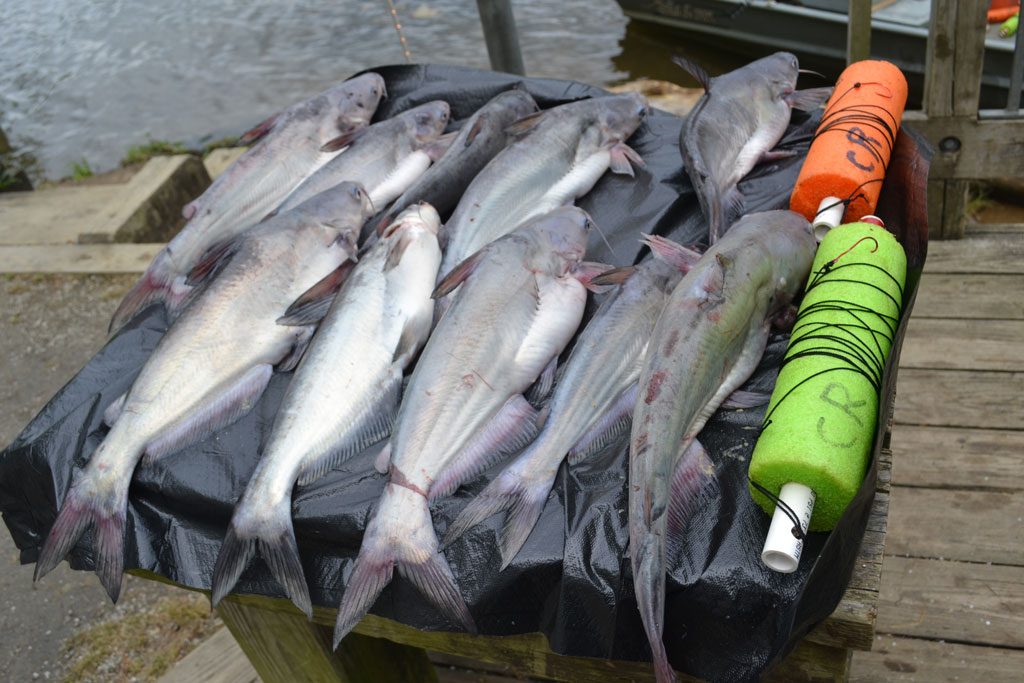 The 10 cats we kept from our morning trip. Others were released. Photo by Clay Richardson

I began jug-fishing over 50 years ago in the Mobile Delta—Bayou Canot and the Mobile, Tensas, and Middle Rivers. Having fun and catching fish are still priorities.

Fishing has never disappointed me! On the rare day when catfish will not bite on the noodles, I fish with rod and reel or fly rod while tending to the jug set. (Yes, I still call them jugs even though I have gravitated to swim noodles over the years).

“Fishing has never disappointed me!”

Back then, we used half-gallon bleach bottles. Anything larger takes up too much room in a boat.

I use a one-foot piece of noodle with a hollow center. An 18 in. piece of PVC is inserted through the center and a hole drilled in one end through which the line is tied. I typically use black tarred line (ends do not ravel), although 50# mono works well too.

Avoid braid for one reason. It will cut your hands when landing big fish. Put your initials on each noodle to eliminate confusion if more than one person is fishing an area.

I use 3-0 Daiichi or Team Catfish circle hooks because they work. Seldom do you lose a fish on a bite with these hooks. I upgrade to a 5-0 hook and an 18 in. long bigger diameter noodle when fishing with live bait, either bream or shad.

When the fish bite, the cam action of the hook helps in the hook set. Remember, the only hook set comes from the fish pulling against the noodle as it swims off.

One of south Alabama’s most versatile anglers is Baldwin County’s Robert Dobson. When asked about jug-fishing, Dobson replies, “For me, it’s a fun way of fishing. I have about 12 “jugs”(foam floats with four- to eight-foot droplines) that I bait with mullet or cut ribbonfish. Most of these baits are bycatches from speck fishing trips.”

Dobson often puts them out in Fish River and then fishes for reds and bass. “I don’t put them out overnight,” he says. “They catch too many fish. I almost always have something to take home. For me, jugging is a fun way to fish for bass, reds, and catfish.”

Two false rumors persist about catfish. The first is that cats feed only at night. I catch lots of cats and I don’t fish at night anymore. Early morning and late afternoon periods are very productive feeding times with none of the risks associated with being on the water after dark. The second is that catfish are exclusively bottom feeders.

Brian Barton is probably the best catfisherman in Alabama. He guides in the Shoals area—primarily for catfish but also frequently for stripers and smallmouth. I asked him about jugging/noodling on Wilson or one of the other lakes he fishes.

“I use jugs primarily when I need fish for a large fish fry or when a customer wants to learn how to jug-fish,” Barton says. “Jugging usually produces smaller frying-size fish, which is what most catfishers are after.”

Barton uses mostly 20-ounce drink bottles for his jugs. “These are large enough to catch a big fish,” he says, “yet small enough to allow a smaller fish to pull them under far enough to get a good hook set.” His jugs are painted bright and then wrapped in bright duct tape, thus making them identifiable and easy to see in low light.

A cable tie is placed around each jug to insert the hook for transport. “For hooks, I use only Daiichi Circle Wide bleeding bait hooks. They are incredibly sharp and hook most fish with even the lightest strikes. Skipjack and gizzard shad are preferred baits, but I use live ones if targeting big fish.”

He avoids liver and worms because they are easily nibbled off by smaller fish.

Barton fishes in areas of low current whenever possible to help keep the jug set together. Summer and early fall are the most productive months. He sets about 50 jugs and says it’s a full time job removing fish and rebaiting.

According to Barton, “It’s not uncommon to catch over 200 pounds of catfish in a half- day.” 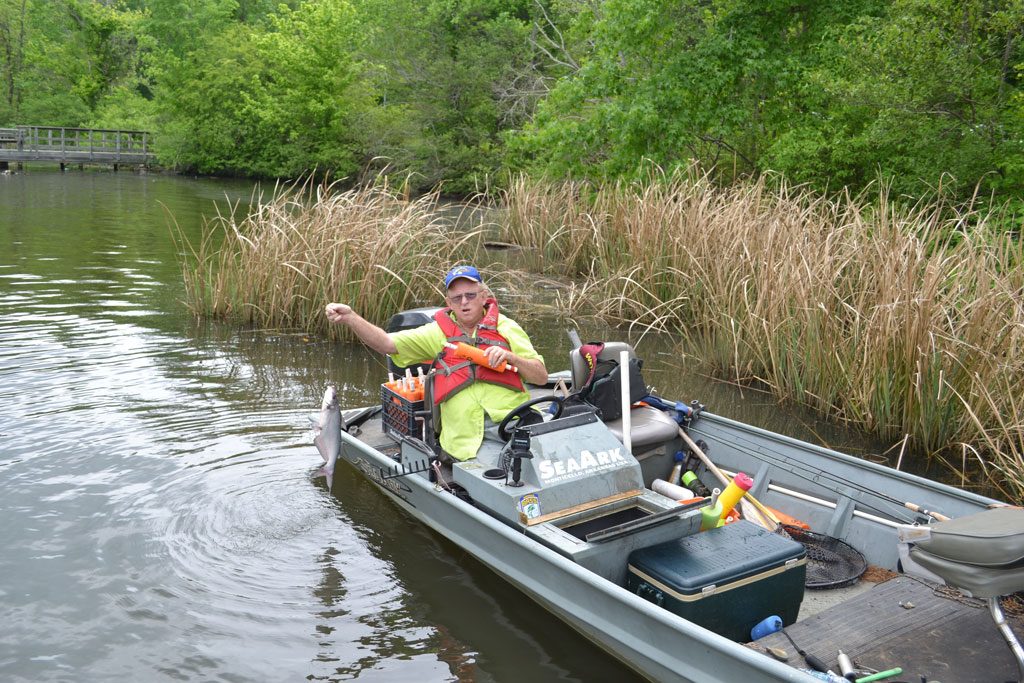 Netting a catfish that almost made it to shoreline cover. Photo by Clay Richardson

Some things you will need in order to have fun noodling:

Make noodles; about 30 should do. I use three colors of noodle to identify line length; ie.4, 7, and 10 feet. I don’t add weight. However, most people put about a half-ounce of lead on their lines.

Attach a large hook firmly to a six-foot rod or pole, or even use a broom handle to snare noodle. A catfish can move quickly and is evasive!

Bring a large ice chest to keep fish in. Catfish is superb table fare, but not if it has set out all day. You can “field dress” your catch to make more room in the cooler. It’s also a good idea to clip the dorsal and side fins as you catch them. Otherwise, either you or your catch will be stuck.

Bring any bait you can get. Shad, skipjack, or bream are excellent but so are liver, cheese, and worms—anything you can get to stay on the hook should work. I have caught cats on marshmallows and chunks of cut up soap.

Start by setting your jugs about 40 feet apart. Current and wind will soon spread them out.

Avoid fishing in narrow or winding streams. This way, the jugs will not be blown to the shoreline as quickly.

Bring a child. This should be the most fun fishing day they have ever had!

When fishing an area with barge traffic, try to place jugs to one side of the river, thus avoiding the possibility of having the bow of a barge push your jugs far downstream.

Our state is full of great catfishing locations. Heading the list are the waters below a dam. Next would be near the mouth of a creek, or flats near a deeper channel. River bluffs are also good. Rocky shores are hard to beat.

The next time you go fishing, and particularly if you have a hankering for a really great fish fry, take a few jugs along and enjoy a great day fishing!