It’s been a long road, getting to today’s best lithium marine batteries. Benjamin Franklin coined the term battery in 1749 when he linked several glass jars together and formed a capacitor. Three decades later, Luigi Galvani noticed a frog’s legs twitching when dissecting a frog with brass and iron instruments. His friend, Alessandro Volta, believed it had something to do with the differing types of metal.

Two decades of testing led Volta to produce the first modern battery, known as the voltaic pile. He made it from copper and zinc discs separated by fabric soaked in a brine solution. However, Volta’s design was prone to leaking and needed better housing. So in 1801, William Cruickshank created a trough design structure, which is still used in some battery types today.

In 1859 Gaston Planté invented the first rechargeable battery using lead and lead dioxide plates immersed in a sulfuric acid solution, and his basic design is still in use today. Planté’s original design has two main variants: multiple thin plates for starter batteries and fewer thicker ones for deep-cycle applications.

Fast forward to 1967 in Beaver Lake, Arkansas, the first BASS Federation tournament hosted by Ray Scott. This event marked the beginning of the expanded use of battery-powered trolling motors and fish-finders and the need for dependable, rechargeable batteries to power them.

Today’s larger, heavier bass boats use 36-volt trolling motors, two power poles, multiple live wells, and up to five electronic graphs. Throw a radio and several speakers in the mix, and suddenly the need for a dependable power source is obvious.

Fundamental research using lithium as a replacement for lead in batteries began in the 1950s. Further developments through the ’60s and early ’70s led to increased efficiency with use at ambient temperatures.

Exxon released a commercial model in 1977 and soon realized that the wire connection at the anode became unstable due to a chemical reaction between the battery terminal and the connector. This buildup resulted in excessive heat and was responsible for an increasing number of fires.

After experimenting with different catalysts and anode materials, these new prototype batteries were closing in on a tremendous breakthrough for the worldwide battery market.

Further developments led to the first successful commercial Li-ion battery by Sony in 1991. In 2019 the Nobel Prize in Chemistry was awarded to three scientists, John B. Goodenough, M. Stanley Whittingham, and Akira Yoshino, for their work in developing the lithium-ion battery.

The past 30 years have seen remarkable progress in the battery industry, and manufacturing breakthroughs have led to more efficient and longer-lasting batteries for boating and many innovative electronics.

In addition, the newer technologies have allowed for increased electrical capacity that can handle the increased use of the latest integrated electronics and onboard marine appliances.

There are now numerous Li-ion battery manufacturers competing in the marine battery market. In addition, they offer a remarkable variety of battery sizes and warranties unheard of in the traditional lead-acid battery world.

Although continuing research has led to the development of six different types of lithium batteries, there is currently a clear winner when choosing a new marine lithium battery.

Their only drawback besides the initial cost is that cold weather hinders their recharging. However, most major suppliers now offer a battery warming circuit to overcome this charging issue.

Why Switch From Lead-Acid to Lithium?

For years, lead-acid and AGM batteries have dominated the marine industry because they’re readily available, relatively cheap, and easily replaceable. However, the primary issue is that these batteries don’t hold a charge for very long, are prone to acid leakage, require more maintenance, and weigh near 300 pounds for a typical four battery setup. 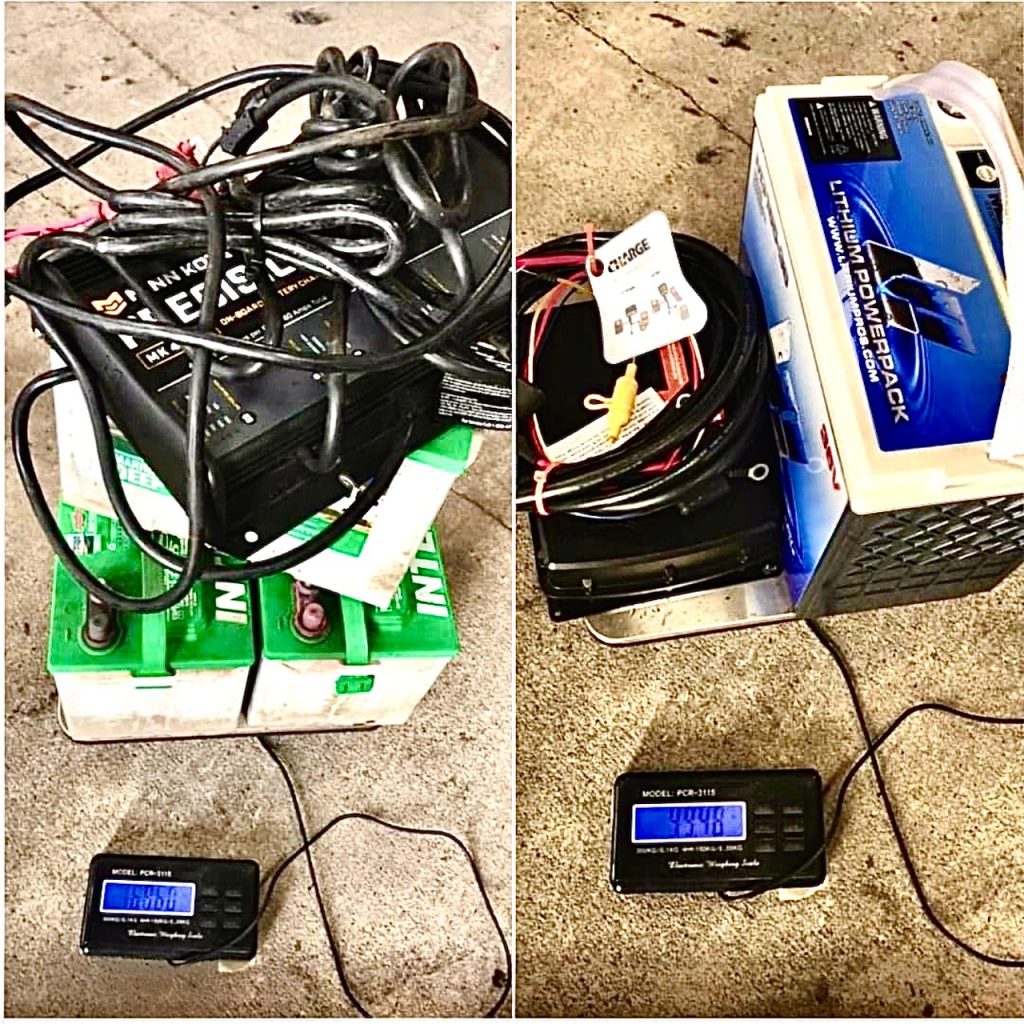 Switching to lithium marine batteries may have a high entry cost but the money is worth it in the long run.

The lifespan of a lead-acid battery depends on how well you maintain the battery. On the other hand, lithium marine batteries only require the correct charger to optimize their performance and lifespan. Many new batteries even offer a phone app to monitor your new battery, and most have a built-in BMS (battery management system) to monitor the charging process.

So, with near 100% DOD (depth of discharge), a 50-70% weight reduction, short charging times, and warranties up to 11 years, the time to replace those heavy lead-acid batteries might be sooner than you imagined.

Below are a few things to consider if you’re thinking about making the switch to a newer Lithium battery for your boat.

Some of the first Lithium marine batteries offered for sale were smaller than the standard sizing used in the traditional battery market, and battery boxes, holders, and connectors had to be modified. Today’s Li-ion marine batteries come in standard sizes that make the swap much more straightforward.

Lithium is the least dense and, therefore, the lightest metal known. That’s why the newer Li marine batteries are 50-70% lighter than their lead-acid counterparts. 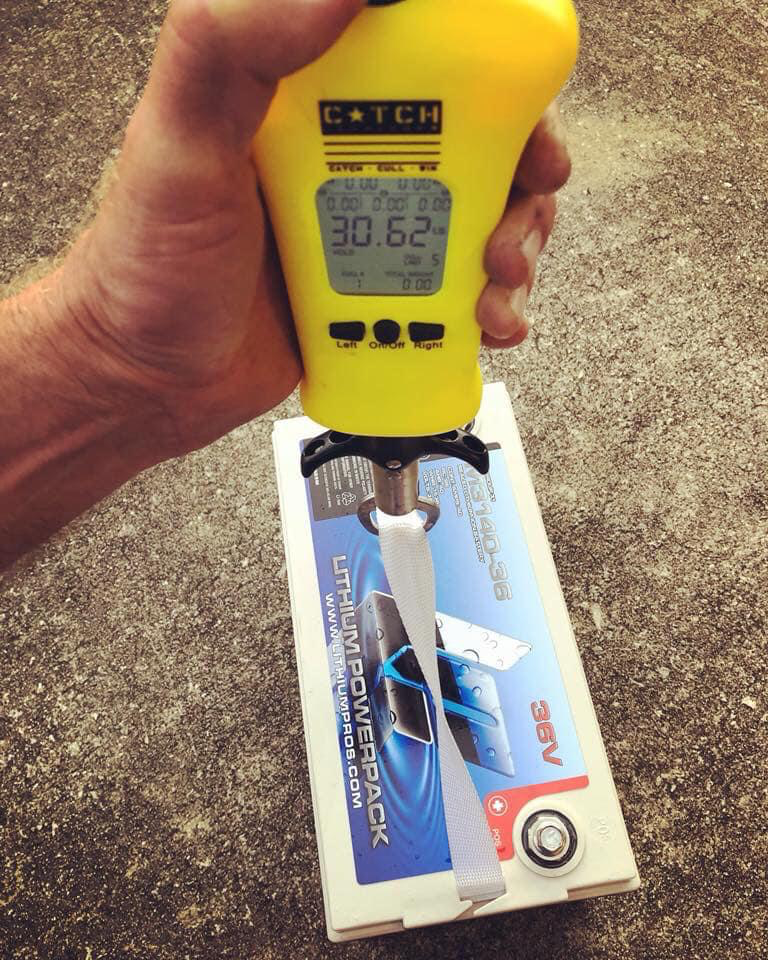 Lithium marine batteries weigh much less than their lead-acid counterparts.

The voltage output of traditional marine batteries slowly decreases as they discharge. In addition, routinely draining a deep-cycle lead-acid battery below 50% will result in poor performance and premature failure. Lead-acid batteries will typically last twice as long if taken down to only 50 percent, the depth of discharge (DOD) recommended by most experts.

What About Cold Weather?

Some LiFePO4 batteries have a built-in heating system that activates during charging in cold weather. When charging, the heating system automatically switches on if the ambient temperature is below freezing and deactivates when no longer needed. The heating system does not use power from the battery but utilizes the charger’s current.

There is a third option where one 36 volt Lithium battery is used instead of three 12 volts wired in series. The main advantage to this setup is fewer connections and freeing up a little space. There may be a little cost-saving, but the main benefit is less wiring.

Many lithium marine batteries are drop-in replacements, meaning their case is the same size as the comparable lead-acid battery. However, you may need additional components to complete your installation.

The correct battery charger is required to maximize Li-battery performance and lifespan. Additionally, lithium batteries don’t display any warning signs they’re about to die, so you may also need to add a BMS (battery management system) if not equipped. Fortunately, most top brands have BMS circuitry built into each battery, and many send data via blue-tooth to your phone.

Most of these changes are relatively straightforward; however, be aware that any wiring mistakes or faulty connections in your electrical system can be dangerous. So, if you are not confident in switching to lithium marine batteries on your own, get some professional assistance.

Is Upgrading a Marine Battery to Lithium Worth It?

Lithium marine deep cycle batteries are more expensive than their lead-acid counterparts. However, you’ll enjoy the benefits of a significant weight reduction, increased efficiency, added safety, and a longer lifespan. In other words, once your batteries are in place and connections are secured, they are considered “maintenance-free.”

When you compare the cost of lithium and their significantly longer life span, the price tag is about equal and possibly less expensive per hour of use than conventional lead-acid batteries.

So, is it worth the initial cost for lithium marine batteries? Your budget and the importance of lighter, longer-lasting maintenance-free power are the deciding factors.

Most kayak fishermen and other small boat operators answer a resounding yes when asked about the value of a lightweight, long-lasting, dependable, fast-charging battery.

These new batteries are not limited to marine use, and they are making inroads to replace the portable power in campers, golf carts, bicycles, cars, side-by-sides, and even airplanes. They are also a critical component in the expanding fields of solar and wind power.