Mackerel Fishing on the Alabama Coast

Mackerel fishing off the coast of Alabama is restful and relaxing.

It’s a pleasure to cast out a live cigar minnow, put the rod in a holder, sit back, feel the early morning sun start to warm up the world, and listen to the seabirds as they work the surface of the Gulf. The calm of the low swell of the Gulf is like being in a rocking chair. What could be more peaceful than—

We interrupt the previous sedate and restful scene to bring you the following emergency message: The reel of the spinning rig you just put in the rod holder on your boat is now screaming, the line is ripping off the reel, and the rod is bent in an alarming curve.

You’d best get over your resting state of mind and try catching the rocket that is getting away with your hook, line, bait and all. There will be time enough to rest and relax later. You have work to do now, but it’s the kind of work that’s a whole lot of fun.

This scene of two states of mind comes very often in late summer off the coast of Alabama. The water may be calm, the wind might be light, but the mackerel that patrol the waters looking for food are anything but calm and peaceful.

These high-speed eating machines—both Spanish and king—can wreck a peaceful morning in a heartbeat, and no angler seems to mind the disruption at all.

Fishing for mackerel, either from small boats or from piers or even the beach, is one of Alabama’s most exciting kinds of saltwater fishing, and anglers can count on hooking mackerel every day in late summer. 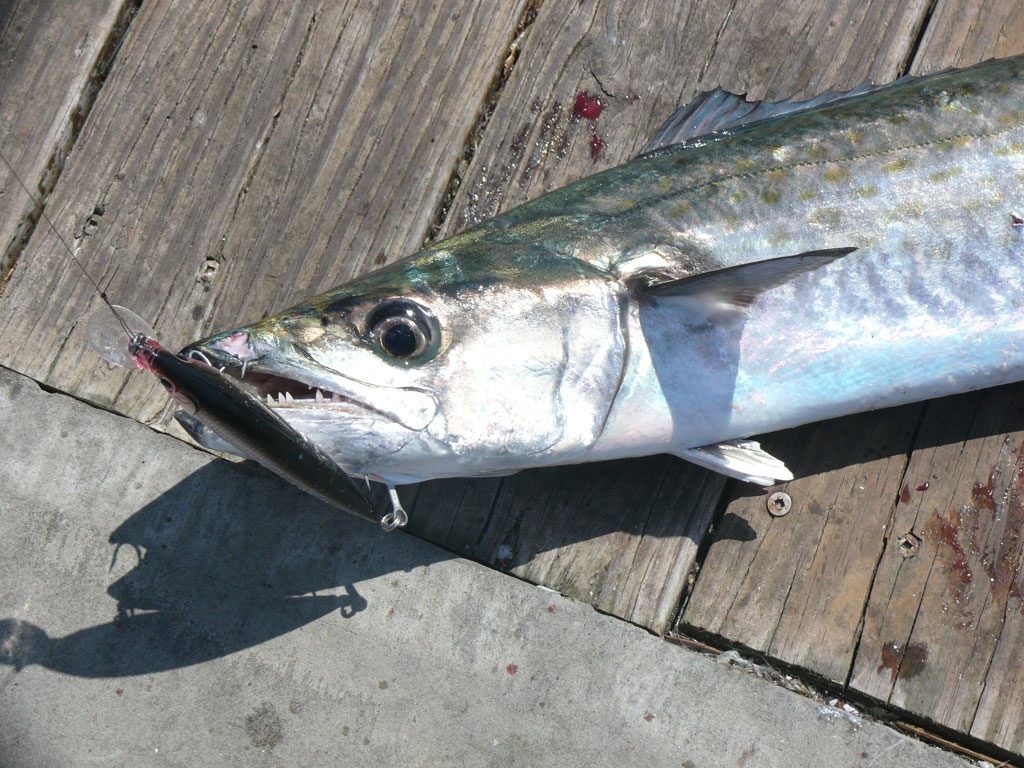 Make sure the mack is at least 24 inches long; this is a juvenile king. Photo by Ed Mashburn

What Kind of Mackerel?

Young kings look a great deal like their smaller cousin, the Spanish, even down to having yellow spots on the side. This look-alike situation can cause problems for anglers. We’ll look at that later.

Although both species of mackerel on the Alabama coast are good for eating, most folks are very specific about their preferences for table fare. Spanish are quite good for almost all kinds of cooking. And kings, when in smaller sizes, are pretty good, too. Larger “smoker” kings are not so good for the table, except when made into fish dips. Then they’re very good.

Where to Find Macks

Mackerel can be found in Alabama’s August waters from almost up on the sand to far out into the blue waters of the Gulf.

In general, however, Spanish tend to be closer in toward the beaches than kings. In fact, Spanish are very often caught by anglers fishing from the beach. They run in large schools chasing bait. Birds will often follow above and dive down to take their share of the bait being attacked by Spanish below.

Kings will most commonly be encountered past the second bar off the beaches of Alabama. They like to run the outside of the bars in 20 feet of water or so, and while they will also often school up and bust bait, they are not as prone to form massive schools as do Spanish.

“Prime places to find both kinds of Alabama mackerel are around the many gas rigs just beyond the pass of Mobile Bay.”

Prime places to find both kinds of Alabama mackerel are around the many gas rigs just beyond the pass of Mobile Bay. These gas rigs provide cover for bait, and where there is bait, the kings won’t be far away.

Anglers can slow-troll around the gas rigs or tie up to a rig and free line a live bait to encounter fast mackerel action.

Another great place to find mackerel in August is from the long Gulf Shores State Park Pier. This pier offers land-based anglers the very real chance to hook and catch mackerel just as big and in just as great numbers as any boat angler.

There’s a set of accepted behaviour when fishing on the pier, but regulars to the pier will help a newcomer to the mackerel fishing game learn the techniques and the ways to fish from the pier. 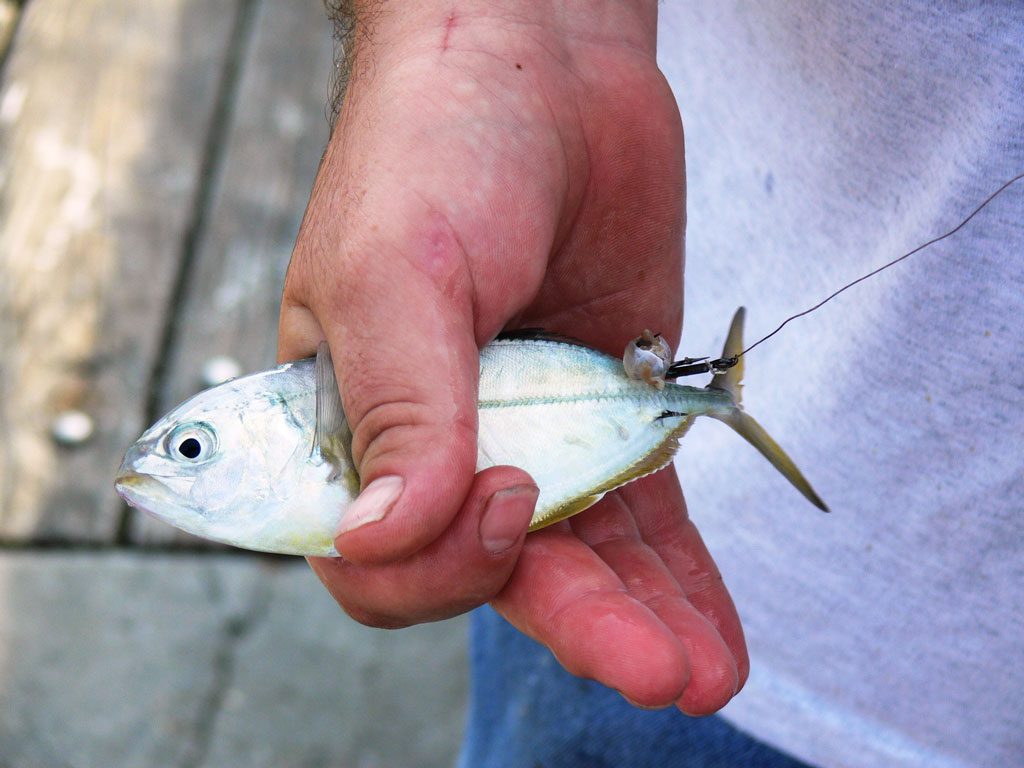 What to Use to Catch Them

Both Spanish and king mackerel are fish eaters. They spend their time looking for smaller fish which they can chase down and gobble.

Live bait is the best choice in most situations. Live or frozen cigar minnows or Spanish sardines (these are sold at all coast area bait and tackle shops) are deadly on macks of both kinds.

A two-hook stinger rig with a steel leader is needed when live bait fishing because mackerel are notorious for short-striking a live bait, and the second hook which trails toward the tail of the bait minnow often provides the hookup.

When looking for kings, in particular, anglers should have (in addition to their big king rig) a smaller rig with either a small spoon or a sabiki rig to catch some live bait.

There’s nothing better to attract a really big king mackerel than a lively blue runner sent back in the Gulf on a stinger rig. Let this fresh-caught blue runner do its thing and chances are something long, large, and silver will find it.

Both kinds of mackerel will hit artificial lures.

The key to selecting mackerel lures is to find something bright and shiny that can be cast a long way and retrieved at warp speed. Traditionally, lures such as the Gotcha lures work well. Swimming plugs such as the Yozuri Minnow lures can work well on August macks, too.

Any lure used should be equipped with at least six inches of steel leader. Mackerel teeth will cut through mono or fluorocarbon leader in a heartbeat.

A very entertaining way to catch Spanish mackerel when they are feeding heavily on top of the water is to cast a bright streamer fly on an eight- or nine-weight fly-rod. This fly should be stripped back to the boat or beach as fast as possible. There will be absolutely no doubt when a mackerel strikes.

When a mackerel takes a fly and starts its run, a fly-angler will have a ball trying to keep up with the high-speed fight. Of course, fly-anglers will need to use a short section of bite-proof leader to prevent the mack from removing the fly instantly.

How to Play Them When Hooked

Mackerel on the coast of Alabama in August can range from little two-pound Spanish to massive 40-pound kings, but they all can be caught on fairly light line.

A twenty-pound test line is sufficient in most cases. However, there needs to be a lot of the line on any reel used for mackerel. When a mackerel is hooked, it makes a scorching run, and a smoker king of over 20 pounds can peel off 100 yards of line in just a few seconds. Any reel used for mackerel needs at least a couple of hundred yards of line.

“For both Spanish and kings, the best thing an angler can do when a mack strikes is let the fish run.”

Next, reels used for mackerel fishing in Alabama in August need to have good drag systems. Set the drag light. The reel must allow the line to be pulled off the reel against the drag with no catches or freeze-ups. Whether spinning gear or level wind is used, the reel must be up to the job, or the fight with a big mackerel will be a short one.

For both Spanish and kings, the best thing an angler can do when a mack strikes is let the fish run. Any attempt in the early part of a mackerel fight to stop the fish as it runs will probably pull the hook.

Of course, some macks have their own way of doing things, and some kings make several long, strong runs.

A problem that mackerel anglers face is that at certain stages of life, kings and Spanish mackerel look very much alike.

Young kings, say five pounds or less, often have yellow spots on their side just like Spanish. It can be very difficult to tell the two fish apart.

It’s crucial when keeping mackerel for a big fish fry that juvenile kings are not kept. The minimum length for kings to be kept is 24 inches, and an angler who brings home an ice chest of small kings thinking they are Spanish (which don’t have size limits) might have a very expensive fishing trip if a Game and Fish officer happens to check the angler’s catch.

Anglers are allowed two kings per day, but 15 Spanish per day can be kept.

The most reliable way to tell the difference between Spanish and juvenile kings is to look at the dorsal fin. In kings of any size, the dorsal fin will be a uniform grey or silver color; much like the color of the rest of the fish.

So, look at the black flag on top. If it’s there, the fish is a Spanish and good to take home.  If the dorsal fin is not a rich, solid black, let the young king go, and hope to hook him next August when he’ll be a lot bigger.

So, whether we fish from a boat somewhere off the coast, or from a pier, or even off the sandy beaches of Alabama in August, there’s a good chance that we’ll encounter these fast, aggressive and tasty fighters.

Mackerel are very common, and once an angler connects with either a bunch of smaller Spanish or one of the smoker kings, it’s a sure thing the angler will want more of this kind of fun.

It’s a great way to have a great day outdoors in Alabama.