Mangrove Snapper Fishing On The Rocks

Snapper season lasts all year long if you go after the right snapper in the right places on the Alabama coast.

My shrimp was not very happy as I allowed it to sink slowly into the clear water of Perdido Pass near the rock jetties that break the strong Gulf swells. As the shrimp sank out of sight, I watched my line carefully because what was about to happen would come with little warning.

My line twitched. At the second twitch, I removed all slack from my line and allowed the fish below to swim off and set the hook in its jaw.

My light rod bent way over as a strong fish pulled toward the rocks below, swimming to a safer sanctuary. I managed to keep the fish free from the boulders below and then worked it to the surface where it raced and splashed in an effort to gain freedom. 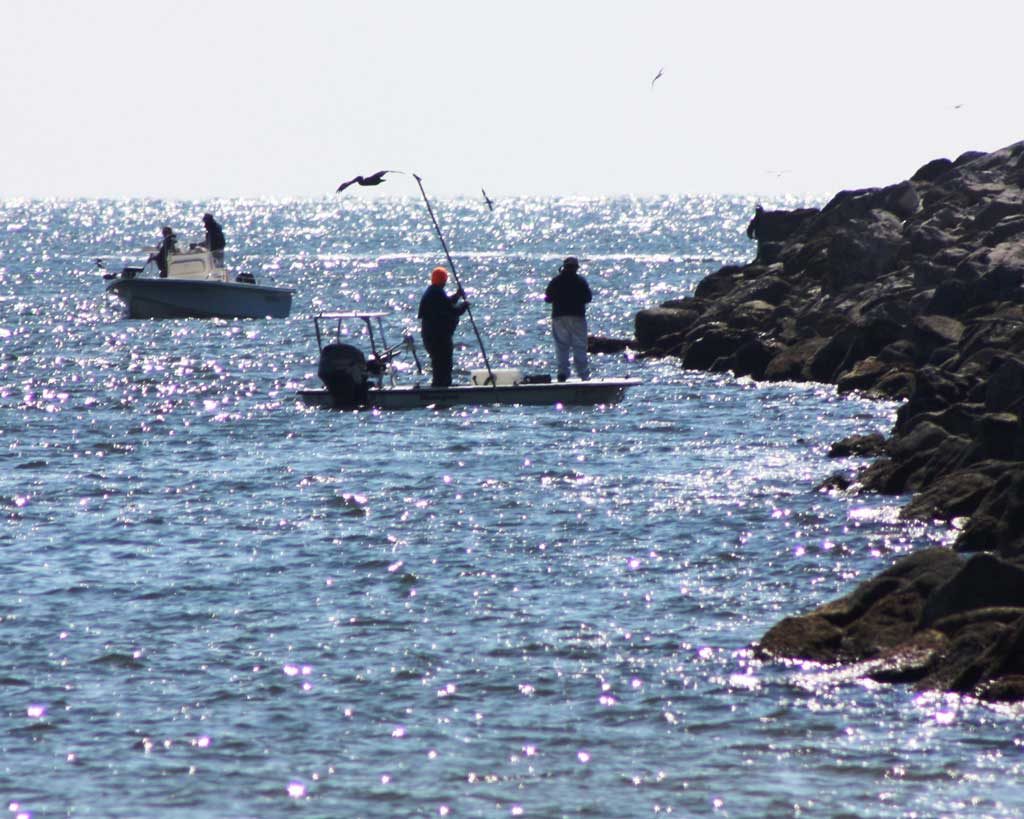 A gorgeous two-pound mangrove snapper flashed its copper, maroon, and golden sides as I netted the strong fish and added it to the ice chest for a fine supper.

Mangroves don’t grow as big as red snapper, but they are much more accessible to inshore anglers than reds, and we can usually catch a good mess of mangrove (gray) snapper very close to shore.

Also, mangroves are very good to eat. Some folks say they are better than their big red cousins. So, there’s no reason not to go snapper fishing…and often.

Where to Find Them

There are two things that almost always go together: mangrove snapper and some sort of hard structure.  Mangroves in Alabama love to hold near rocks and cement structures such as deep bridge pilings.

If we can add a good tidal flow to the mix, we’ve got the prime setup for a mangrove snapper hole.

Both Mobile Bay Pass and Perdido Pass have suitable rock structures for mangroves, and when the tide is moving, anglers can scout the passes to find the best concentration of these hard-fighting little snappers.

The rock jetties at Fort Morgan are good spots to find hungry mangrove that will come out and play.

Although Mobile Bay Pass and the rock structures there are good, I prefer to fish the Perdido Pass area. If you’ve ever been to Perdido Pass, you’ll notice that both sides of the pass itself have lots of rock structure that was placed to stabiblize the artificial pass to the Gulf.

The middle jetty, which lies in the center of the pass to the Gulf, is my favorite Alabama mangrove snapper fishing spot. The west end of the jetty—the end toward the pass where the charter boats head out to the Gulf—is the deeper end, and it usually holds the most snapper.

Also, the high Perdido Pass Bridge offers hard structure in fairly deep water and often attracts schools of mangroves. When a strong current is running through the pass, anglers can anchor near the bridge pilings and drop live shrimp close to the cement structures and get into some very hot mangrove snapper action.

Some good-sized snapper (up to four or five pounds) are found here in the deep water near the channel.

On numerous occasions I’ve taken a bucket of live bait to the parking area below the west end of the bridge and caught nice messes of mangrove snapper by letting the live bait sink alongside the closest set of bridge pilings to the walkway.

This place gets lots of fishing pressure from locals and tourists alike since it’s so easy to access—it’s always shady and cool—but when the tide is running in strongly, mangrove flocks to the pilings of the bridge and actively look for food.

In short, Perdido Pass is just about the best place in Alabama to find inshore snapper on the rocks.

A number of good launch facilities are found near Perdido Pass, but the closest and best is the free public ramps at Boggy Point. This double-wide ramp offers anglers good parking and steep, easy-to-launch ramps.

A wide range of structure-loving fish call the multitude of cement dock pilings home, but mangrove are one of the more commonly caught fish from the pilings. 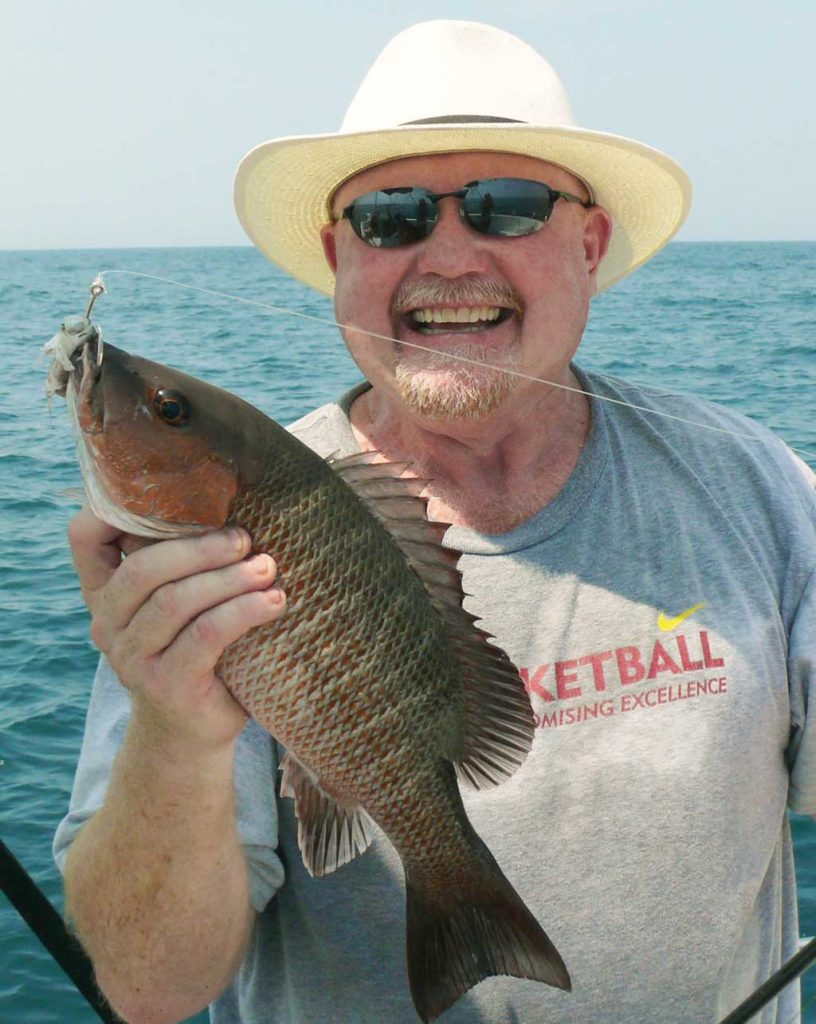 Even the smaller mangroves put up a good fight. Photo by Ed Mashburn

Mangroves are also caught on the hard structure of the gas rigs in Mobile Bay. The only problem with fishing for mangrove on the rigs is that we find so many other kinds of fish there and the snapper may not get a chance to bite live bait when offered.

Of course, for the very biggest mangroves, we need to head offshore to the hard structure—bridge and road rubble reefs—where some six-pound and larger mature adult mangroves gather.

These mangroves are the largest ones to be found in Alabama, but the basic fishing techniques for catching them are the same as for the smaller snappers inshore. The big offshore adult mangroves are much more likely to take typical snapper bait such as fresh or frozen cigar minnows, cut bait, and even live pinfish dropped down deep to the structure on the bottom.

A standard reef-rod and reel works well on these big offshore mangroves. Offshore mangrove anglers will want to use a rig with 50-pound line. You never know when a huge grouper might take a bait intended for a six-pound mangrove snapper.

How to Catch Fast-Striking Mangroves

Mangroves are not stupid fish. They have a reputation of being hard to fool, and I have experienced days when I could not get them to bite, even though I knew the fish were there.

When a particular spot is worked hard by anglers, the remaining mangroves get very selective about what they will bite. When this happens, find another good spot to fish and come back later when the fish have recovered their appetites and lost some of their caution.

Inshore mangroves bite best on live bait (very-much-alive bait). I’ve had little success with dead bait. Mangroves like live shrimp. I have caught a few inshore mangroves on bull minnows, but by far, the best results come with lively shrimp. Mangroves will take fiddler crabs, too.

Mangroves inshore tend to weigh three pounds or less. When they get much bigger than this, they go offshore to the deep water reefs.

So, I don’t use too heavy a rig when I fish for mangroves on the rocks. I like a seven-foot-long spinning rod, light to medium action, and I like 12 lb test line for my main line.  I do like braid line for mangrove fishing because it allows me to feel the strikes of the mangrove—they’re fast and light—and it offers quite a bit more resistance to barnacles and sharp rock edges that slice through monofilament line.

I like to put a ¼ to ½ oz sliding sinker on my line and then attach a 16-inch section of 12 lb fluorocarbon leader to the main line with a good quality swivel. The swivel stops the sliding sinker from running down to the hook.

I like to use a small Kahle hook. This hook tends to hook the fast-striking mangrove on its own, much better than “j” hooks. I thread a good lively shrimp through the horn of the head, and then I lower the shrimp as close to the rock or cement structure as I can and let it sink naturally.

With this rig, I expect that I will get snagged and lose some terminal gear. If I’m not hanging up, I’m not fishing in the right place for mangroves.

When the mangrove hits, it will usually be a very sharp strike, and I’ll either have the fish, or I’ll need to reel in and rebait.

When fishing offshore for the mature mangrove, I have found them much more willing to take dead bait. Frozen cigar minnows lowered to the hard structure below on a much heavier but similar rig to the inshore mangrove sliding sinker rig works well out in the Gulf for the big ones.

However, if I can take a bucket of jumbo-size live shrimp offshore, I know that my chances of catching some really big mangroves will improve.

When to Catch Them

Mangroves are in Alabama coastal waters year-round, but there is no denying the fact that they are easier to find and catch during summer and fall season. The inshore water of the ICW and passes get full of immature mangrove snapper around docks, weed beds, and other structure during warm weather.

When the weather cools, the mangroves tend to thin out from the shallower inshore water, but by fishing the gas rigs just offshore, we can catch some really nice mangrove snapper in winter.

It appears that as the water temperatures cools, some very nice mangroves come closer in to shore and the close rigs can be great places to fill an ice chest with delicious bigger snapper.

During the summer season when mangroves are at their thickest in inshore waters, it’s very common for anglers to catch dozens of mangroves, yet have very few of them make legal size.

We catch lots of nine and ten-inch-long mangroves that must be released. The bigger inshore mangroves get very well-educated in the efforts of anglers, and they tend to let the smaller, more ignorant young ones eat first.

Usually, by being patient, when we find a school of sub-legal mangroves, we can “thin out” the smaller fish and finally catch some twelve-inch and larger legal fish.

What’s In a Name?

I will freely admit that I have been admonished on a number of occasions by marine biologists who called me to task about my calling mangrove snappers “mangrove snappers.”

The true name of this wonderful little fish is gray snapper, and I accept that as its real name. However, everyone I know who fishes for these fish in Alabama calls them mangroves. And so do I.

So, whether we call them mangroves or grays, if we work the rocks with live bait, we’ll probably catch plenty of them for a fine supper.

Boggy Point: located at the end of Marina Blvd off Orange Beach Blvd on Hwy 161.  This ramp offers lots of parking and is good to put in even fairly large boats.

Fort Morgan Park: from Hwy 59 South, turn west on Hwy 180. Go to the end of the road to enter Fort Morgan Historical Park. Ramps are on the right past the ferry landing. These ramps give great access to the waters of Mobile Bay and the Dixey Bar as well as rock jetties along the shoreline.