Migrant Pelagic Fish Back on the Coast | Great Days Outdoors

Migrant Pelagic Fish Back on the Coast

I really am enjoying the growing warmth of the sun. Spring is definitely here on the Gulf Coast. The chill winds of winter, which drove the big pelagic fish far south to warmer waters of South Florida, are just a memory.

My line is stretched behind my boat. The live cigar minnow I lip-hooked and dropped back 50 yards is struggling against the pull of the line. I can feel each tiny tail beat as the bait swims strongly. Between the warmth of the sun and the rhythmic beat of the bait’s tail, I can feel myself sinking into a restful state of mind.

Then, I am suddenly pulled back into the here and now because the bait pulls very hard and starts a rapid, direction-changing effort. The bait flashes up to the surface. Then, it just disappears in a massive splash as something much bigger and hungry takes the bait.

The calm, restful morning is over. My reel drag starts to whine and then moves into scream mode as a 3-foot long silver lightning bolt of a king mackerel rips away toward the horizon.

No doubt about it, the big migratory fish that bring so much excitement to anglers along the Gulf Coast are back. At this time, coastal anglers have many ways to get in touch with the newly arrived big game fish. 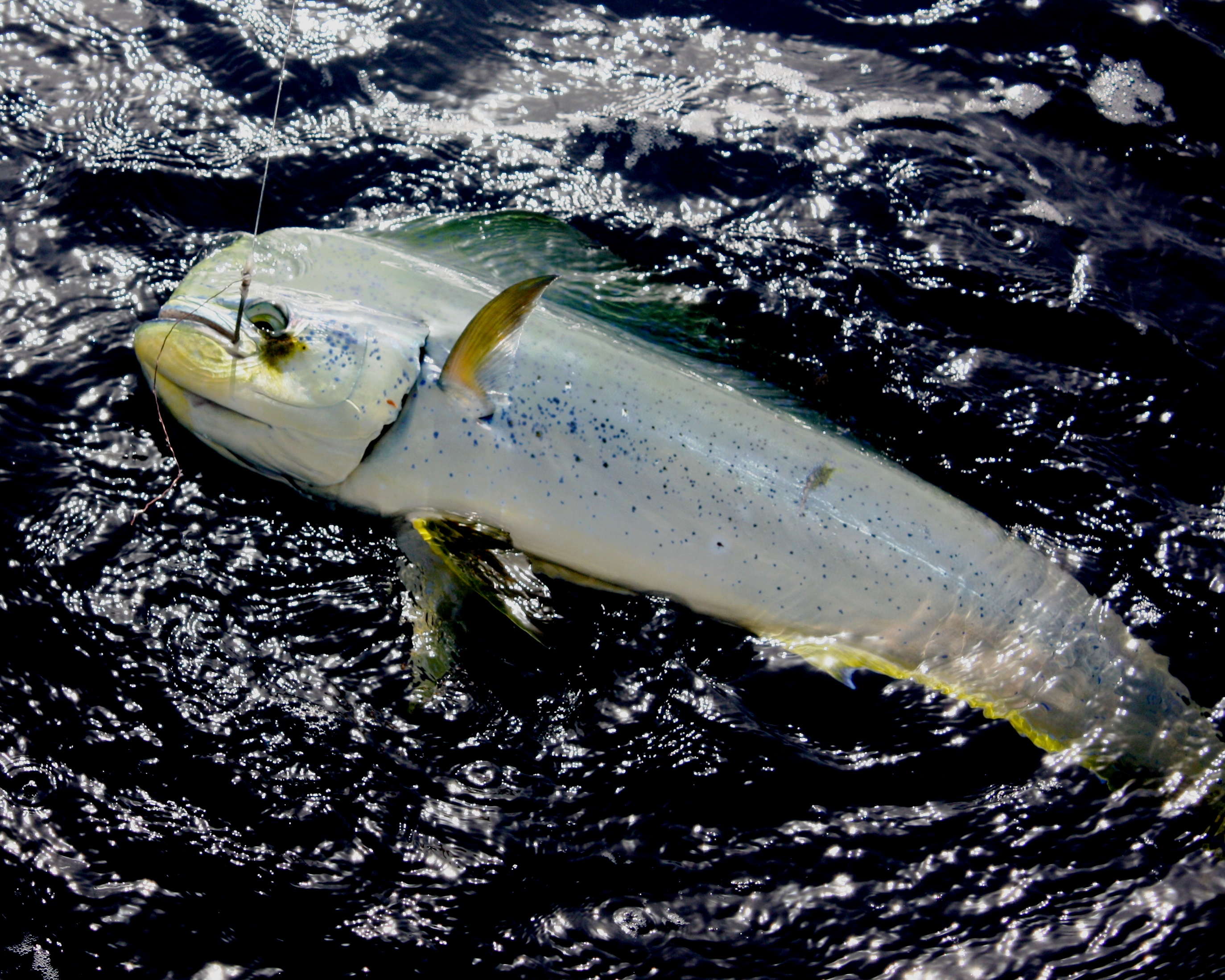 Photo by Ed Mashburn. Dolphin are eager to strike when they return to Gulf Coast waters.

In the spring when the waters of the gulf warm to 70 degrees, the mackerels will start showing up. Both king and Spanish mackerel are very common warm-weather residents all along the coasts of the Gulf States. The mackerel are all voracious fish eaters. Anglers can expect to meet with these extremely fast fish from just beyond the breakers on the beach to the close-in reefs and other bottom structure.

The most beautiful fish in the Gulf of Mexico, dolphin will show up along the Florida coast particularly from Pensacola to Destin. They will sometimes come within a quarter mile of the beach. At Navarre Beach, Capt. Matt Vann guides kayak anglers. Quite often after the water warms to summer levels, Captain Matt and his clients meet with schools of peanut dolphin and the occasional considerably larger dolphin just where the water starts to get dark and deeper.

Although bonito are found on the Gulf Coast year round, these small, but powerful members of the tuna family are not the primary target of coastal tuna anglers. When the waters warm to at least 70 degrees, blackfin tuna will venture close enough inshore that Florida Panhandle anglers can often encounter these hard pullers fairly close to the beaches. A few blackfins are taken each year by pier anglers also. By the way, blackfin are great fish for the grill.

When the cobia make their annual runs from South Florida to the Louisiana coast, anglers go a little bit crazy searching for them. However, the cobia story doesn’t end when they run through the waters of Florida, Alabama and Mississippi. A few cobia stay in the waters off the central Gulf Coast states all summer long. Coastal anglers who fish reefs, gas rigs and sunken ships can find a few cobia – including some very big ones – all through the warmer months.

Don’t expect to see sailfish often, but when summer conditions are right, a good number of sailfish appear off the Florida beaches within reach of kayak anglers. The hottest spot to encounter nearshore sailfish is the Navarre Beach area. Kayak anglers find some very good warm weather sailfish action when the dark blue water of the Gulf Stream sends a pool of clear water closer in to the shore as the water warms and the sailfish are hungry when they arrive.

Inshore anglers can find tarpon scattered all along the coast from the Florida Panhandle to the Mississippi-Louisiana border. There are some traditional hot spots for finding the big jumpers. Anglers can expect to find tarpon in the summer around Indian Pass and St. Joe Pass in Florida. The Three-Mile Bridge over Pensacola Bay is a great place to catch tarpon, especially at night. 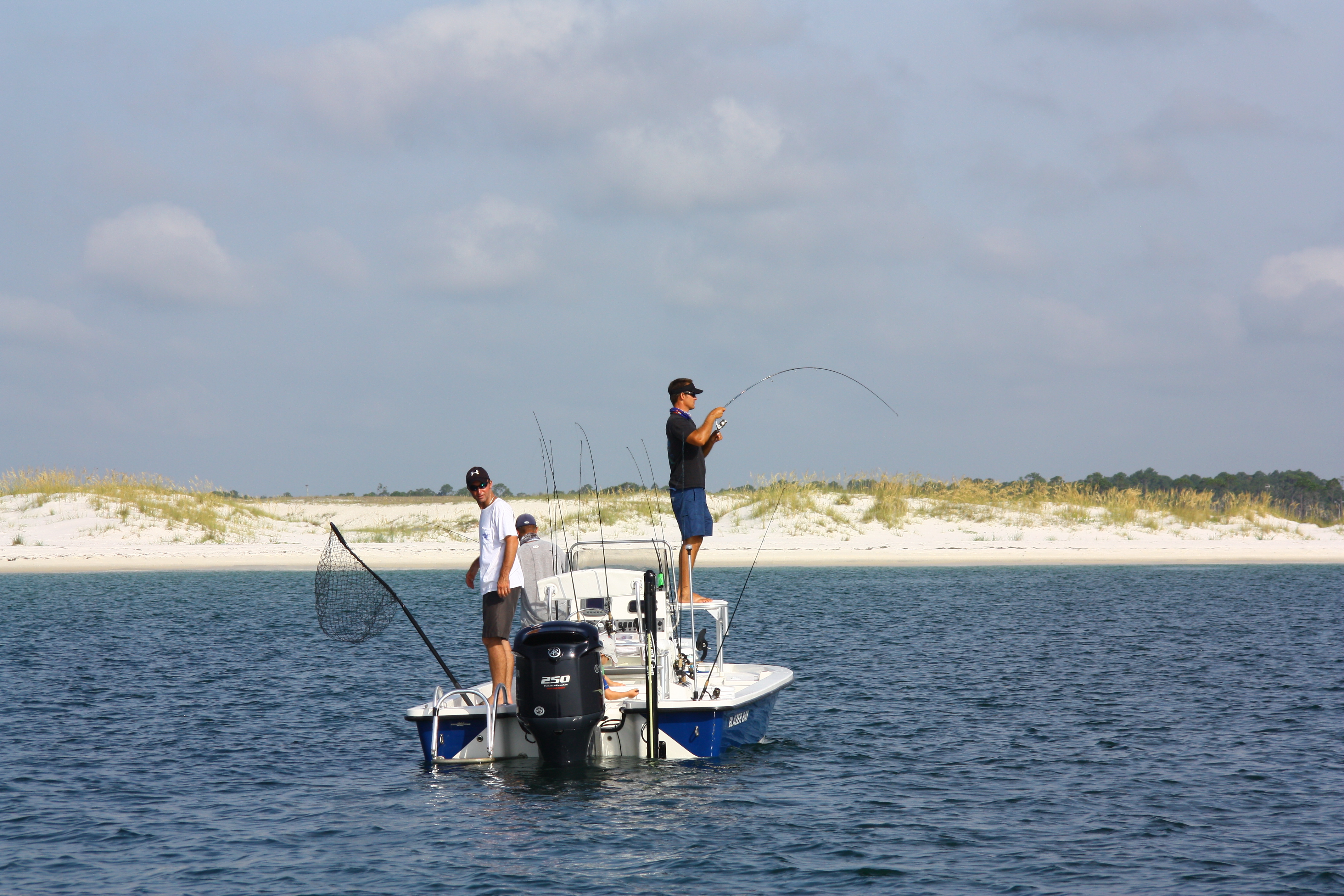 Photo by Ed Mashburn. When a big migratory fish hits and runs, anglers need to be ready to let them have their way for a while.

Where to Find the Big Guys

Florida – From the easternmost parts of the Panhandle to the Alabama state line, anglers can find plenty of big fish in May along the coast of Florida. Big boat anglers can exit the passes at Panama City, Destin and Pensacola to be in the fishing waters very quickly. There are miles of good fishing water between the passes to the gulf. In addition, anglers can almost always run offshore to fish close reefs and find lots of big migratory fish.

Alabama – Although the Alabama coastline is short, anglers can enter the gulf through either Perdido Pass at Orange Beach or farther west through big Mobile Bay Pass. There are many nearshore gas drilling rigs just offshore, which give cobia and mackerel especially good places to hold. These rigs are very easy for anglers to reach.

Mississippi – Anglers can launch at a number of good boat ramps along the coast and then run out toward the wonderful offshore islands of Mississippi. These include Horn Island, Ship Island and Cat Island. All of these islands hold the best concentrations of big migratory fish in Mississippi waters.

Mark Russo works in the tackle department of Sam’s Bait and Tackle, a longtime Gulf Coast source of gear and great fishing advice in Orange Beach, Ala. He advises anglers on the Gulf Coast to look for big migratory fish in May.

Since the big migratory fish we’re going after in May will generally be encountered in open water with few obstructions to abrade the line, anglers can use 20- to 30-pound-test line for even the bigger fish with good results. Russo likes a good brand of monofilament because of its built-in stretch, but anglers who prefer braided line can use a fairly short length of fluorocarbon for a top shot to connect the braid to the lure or hook. Of course, for toothy migratory fish like the mackerels, a wire leader is needed. Russo advises anglers looking at sailfish to use a length of 40- to 60-pound fluorocarbon leader.

Rods should be about seven feet long with a medium action and a fast tip for long casts when needed off piers or when chasing rapidly moving fish.

No matter where an angler prefers to buy tackle, getting a good, well-made rig and using quality line and leaders is the best idea to help hook and catch big migratory fish.

How to Find These Big Ones

Walk to the Action – Anglers who don’t have ready access to boats can catch big migratory fish by simply driving to any of the excellent fishing piers along the coast.

“In Alabama, anglers can walk out a long way on the Gulf Shores State Park Pier and cast to big kings and cobia. Later in the summer, they might spot some big tarpon.”

Florida anglers can use the Panama City Pier, the Okaloosa County Pier at Fort Walton Beach or the Navarre Beach Pier. The pier at Pensacola Beach is another good place to find some great fishing for big fish in May. Each of these Florida piers tends to be better for different migratory fish, but they are all very good for king mackerel and Spanish mackerel in particular.

In Alabama, anglers can walk out a long way on the Gulf Shores State Park Pier and cast to big kings and cobia. Later in the summer, they might spot some big tarpon.

Paddle Off the Beach – Although beach fishing for big migratory fish using kayaks is quite good all along the northern Gulf Coast, the waters off Navarre Beach are particularly well known for providing kayak anglers some world-class fishing for kings, blackfin tuna, sailfish and tarpon as the spring and summer progresses. The gulf deep blue waters run in as close to the beach at Navarre Beach as anywhere along the coast. This means that the big migratory fish can comfortably come closer to the land here than anywhere else. That’s good news for kayak anglers. Kayak anglers can launch anywhere along the miles of sugar-white beaches and be in big game water just past the breakers.

Out of the Passes – The major passes of the northern Gulf of Mexico provide boat anglers access to big migratory fish. Florida passes at Panama City, Destin, Pensacola all have great launch ramps, marinas and bait shops.

In Alabama, both Perdido Pass and Mobile Bay Pass will put anglers in big fish open water quickly. Both passes have excellent ramps close to them.

In Mississippi, boaters can use a number of good launch ramps. Since the Mississippi coast is wide open, all boating anglers need to do is keep the boat in the well-marked channels and head to the open gulf where big fish await.

It has been a long, chilly winter since the big migratory fish left, but with the warming of the water, the big game fish are back. No matter how an angler chooses to get in the game, now is the time for some big, strong, aggressive fish to be hooked up and caught. It’s all a whole lot of fun.