Getting outdoors for a day on the water usually consists of getting in on some enjoyment of what Mother Nature has made. Beautiful surroundings allow for a great atmosphere whether catching fish or not. However, a local Mobile Bay fishing destination makes no promise of such beauty. Instead, Theodore Industrial Canal offers anglers lots of opportunity to get in on some industrial grade fishing.

According to information provided by Lisa Hunter, chief of Public Affairs for the U.S Army Corps of Engineers Mobile District, Theodore Industrial Canal as we know it now was created in the late 70s and early 80s to increase commerce for the city of Mobile. The canal needed to be dredged to a depth of at least 40 feet to accommodate the large vessels visiting the small port. At first, the canal was met with resistance by environmentalists, but the promise of new jobs and an increased boost to the economy helped get it approved. 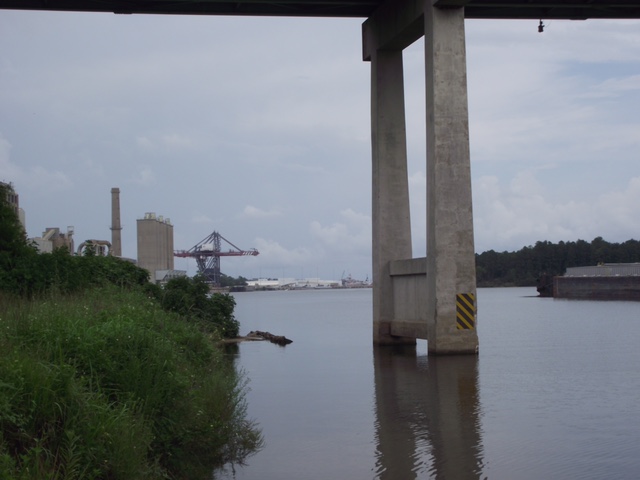 What the Theodore Industrial Canal lacks in the splendor of Mother Nature, it more than makes up for in bountiful Mobile Bay fishing.

Back in 1943, a channel was dredged to reach an area that became known as the ammunition depot, built to supply munitions for World War II and later during the Korean War. This canal was tied into the Mobile Ship Channel and worked west. Once inside the boundaries of land, there was a turning basin dug just east of Deer River.

When the Theodore Canal was expanded to serve the Theodore Industrial Park as well, a longer barge canal was dredged out with another, larger, turnaround basin built just east of Rangeline Road. This deep turnaround holds high salinity waters even when Mobile Bay is filthy muddy. This deep basin serves as a sanctuary to both baitfish and saltwater predators, making the basin an ideal place for Mobile Bay fishing during muddy, winter conditions.

When you first arrive in Theodore Industrial Canal by boat, you are not met with beauty and natural splendor. Instead, you are introduced to a variety of fishing situations made by man and not nature. There are long sandy banks, banks covered with limestone boulders, multiple piers and docks and bulkheads.

All of the situations mentioned above can be potential hangouts for fish, despite the less than optical beauty. Fish like all types of structure, mainly because structure provides havens for minnows and baitfish.

One of the benefits to fishing Theodore Canal is the two bait shops and boat launches that allow anglers to have a boat in the water in 10 minutes and be fishing in just another 15 minutes, depending on where you intend to start.

Deer River Bait and Tackle as well as C and S Bait Shop both have ice, bait and boat launches for their customers. Both shops charge $5 to launch a boat and park your vehicle in pretty secure parking lots.

Just as with most Mobile Bay fishing areas, covering points sticking out from the shoreline is just as important in Theodore Canal. There are multiple points available to fish in the canal. Some are at the opening of waterways or creeks. Some are accidental points made by dredging out for piers, or points consisting of materials (gravel) spilled during loading of barges. No matter what, you should fish each point you come across if you are looking for speckled trout.

Fishing these points with live shrimp under a cork is the preferred way to score on trout. However, some artificial purists use slow-sinking plugs to target trout. MirrOlures in chrome or with green back and silver sides are top choices.

Since there are so many pogies (menhaden) in the canal, artificial chunking anglers do well with a 1-ounce Rat-L-Trap, which closely mimics the pogies. These Rat-L-Traps are fished quickly across the points and bars that extend out from them. Chrome with chartreuse back or chrome with black back are solid color choices.

Obviously, there is a lot of industry going on at the canal. This activity rarely takes a break and therefore there on lights on at night at the various business sites, making for some great, night Mobile Bay fishing. These lights attract bait and the various fish that feed on them. Redfish, sheepshead, speckled trout and white trout are all available around the area with bright lighting.

During the month of October, the most targeted species by local anglers is speckled trout. Hungry, aggressive trout will cruise around the lighted areas, picking off the many baitfish. To be effective in catching these fish you should use your trolling motor and work the edges of the shadows with plastic grubs. There are several piers in the area known as the big turnaround basin. These piers have the most lighting and attract the most fish. 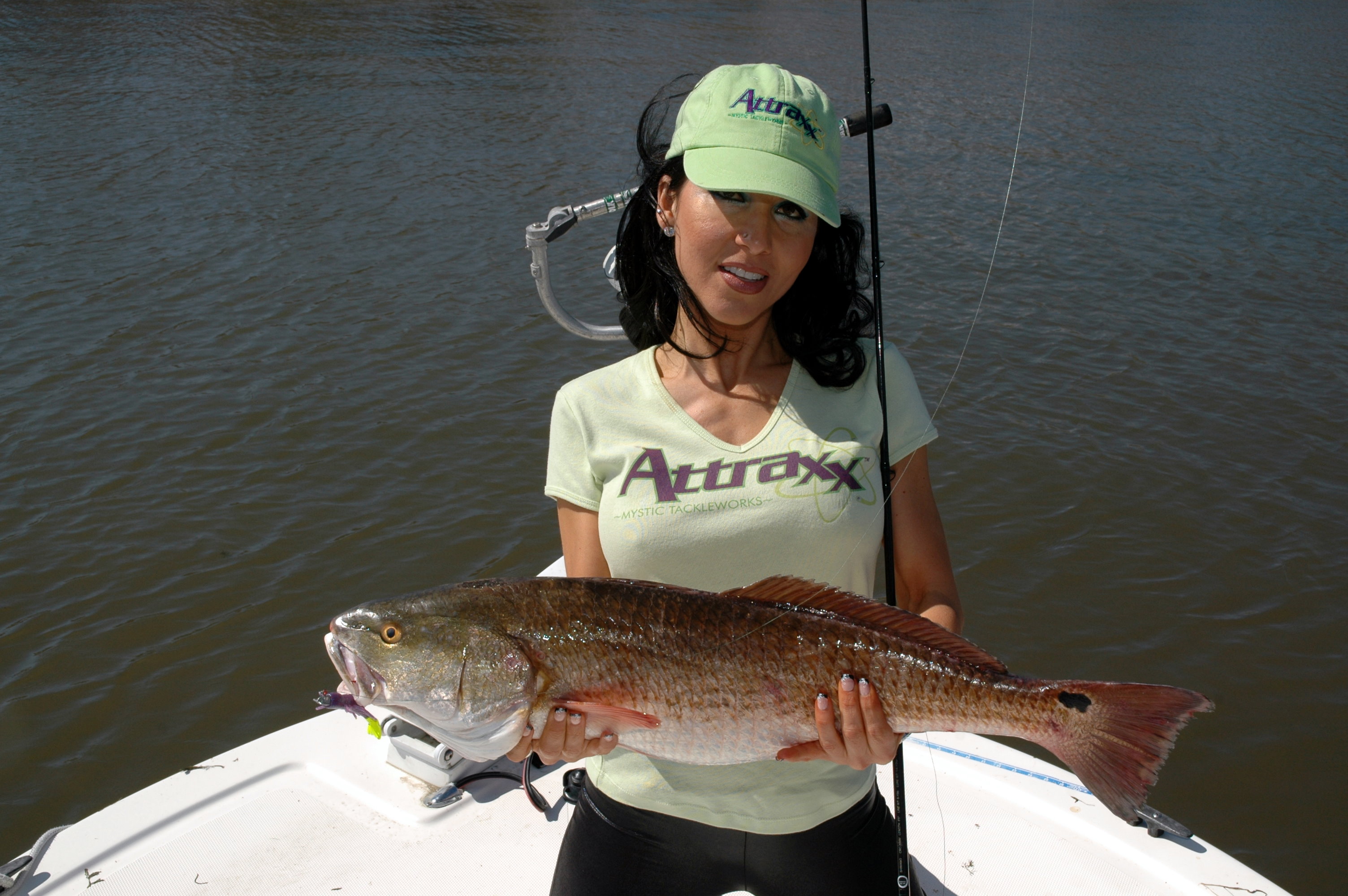 Many different variety of fish, like this nice redfish, can be found while fishing in the Theodore Canal.

Once in a position to cast your grubs, let them fall down in the water column to a count of five to six seconds. After that, you should start your retrieve, making the occasional jerks. Using grubs that contain sparkles or glitter will help you take advantage of the bright lighting. Some of the larger specks can be caught using this technique around the lights. If redfish are your target, you should let the grubs fall closer to the bottom and hop them along on the way back to the boat.

Some of the wiser trout anglers employ a different technique to connect with Theodore Canal specks at night. These anglers use 5-inch long grubs with a 3/8-ounce jighead. These grubs are trolled behind the boat along the banks of the canal, near, but not exactly around the lights.

A couple of little tricks could add to this technique. The first trick is to use glow-colored grubs. Glow colors are normally limited to white or chartreuse versions. These grubs are “charged up” by putting the beam of a flashlight directly onto the grub. The grubs absorb the light and will glow for several minutes before having to be “recharged.” The second trick is to add scent to the grub so fish can track it down in the dark and find the glowing offering.

Another spot to find night feeders is around the old Navy Port Pier at the mouth of the canal. There are numerous lights along the big concrete wall at the shoreline. These lights seem to attract more redfish and white trout than speckled trout. This area will improve for night fishing as the year rolls on and the water temperatures cool. Live shrimp or fresh dead shrimp fished on the bottom can be the key to success fishing the Navy Port.

During fall Mobile Bay fishing, usually late October and into November, white trout make their presence known at Theodore Canal. Big “yellowmouth” white trout of up to two pounds, invade the canal as water temperatures start to drop and the salinity of Mobile Bay increases. The big whites will be located along edges and drop-offs along canal banks. These aggressive feeders will readily attack plastic grubs hopped along the bottom. Chartreuse seems to be the hottest color choice for the whites along these ledges.

Out at the old Navy Port, located at the mouth of the canal, you can locate nice white trout in the deeper waters near the pier. These whites tend to suspend off the bottom, instead of hugging the bottom. Chartreuse curly tail grubs will still take the lion’s share of the whites, but sometimes the whites will key on bubble gum (pink) colored grubs.

Start by dropping your bait to the bottom. Next, move your bait up in the water column in 5-foot increments. Lift your bait up and down (vertical jigging) to trigger strikes. Once you have pinpointed where the whites are staging, you can load the cooler!

Theodore Industrial Canal my not be pleasing to the eye, but the results from a fishing trip can sometimes bring a smile that will override the industrial grade scenery. Hopefully, you can use a few of the tips mentioned above to put a smile on your face during your next Mobile Bay fishing trip.

See you on the water!

Jan-Feb: Big specks on the bottom

Sheepshead on the structure 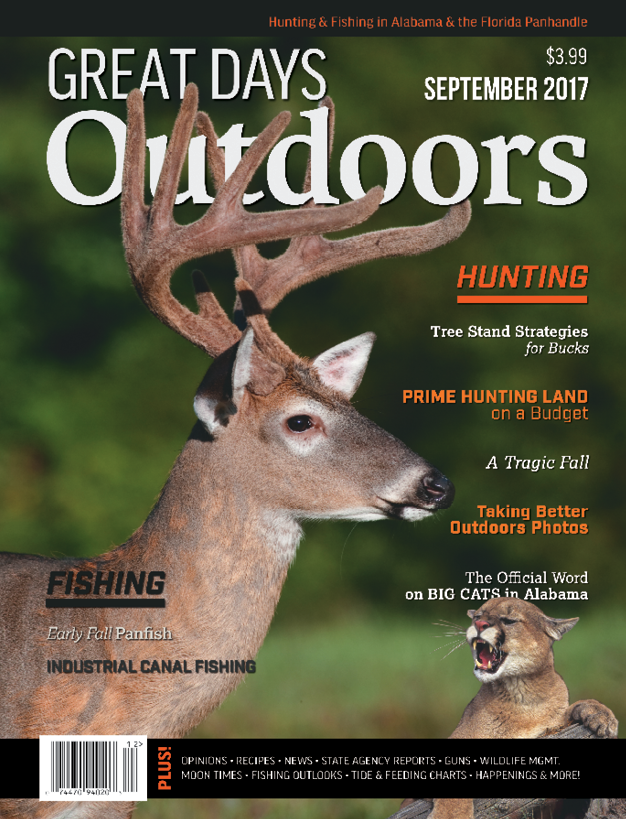 This article first appeared in the September 2017 print issue of Great Days Outdoors Magazine. For more great hunting and fishing content for the deep South, subscribe to Great Days Outdoors print and digital editions or click the image to download this issue.