Living so close to one of the United States largest deltas, South Alabama waterfowl hunters are truly blessed. This large wetland area is home to thousands of annual feathered visitors. Each December, large numbers of ducks migrate into the Mobile-Tensaw Delta with equally large numbers of hunters eagerly awaiting to start their delta duck hunting.

There’s no question that the sport of duck hunting has seen a great increase in popularity over the last five to 10 years. Many people place the blame on the reality TV show, Duck Dynasty. Duck hunting is now ‘cool.’ Others credit the introduction of shallow drive mud motors that have taken a lot of the work out of what once was a grueling, difficult sport. Whatever the reason, South Alabama hunters love their ducks!

The primary area of the Lower Mobile-Tensaw Delta, where delta duck hunting takes place, is the W.L Holland Wildlife Management Area. This area is comprised of prime duck habitat. Grassy shallow water bays, grass-lined creeks and tucked away potholes all hold lots of ducks at various times of the season. The Holland WMA holds gadwalls, teal, shovelers, pintail, widgeon, scaup, redheads, wood ducks, mallards and mottled ducks. Of all the ducks just mentioned, gadwalls are the ‘bread and butter” ducks taken most often. 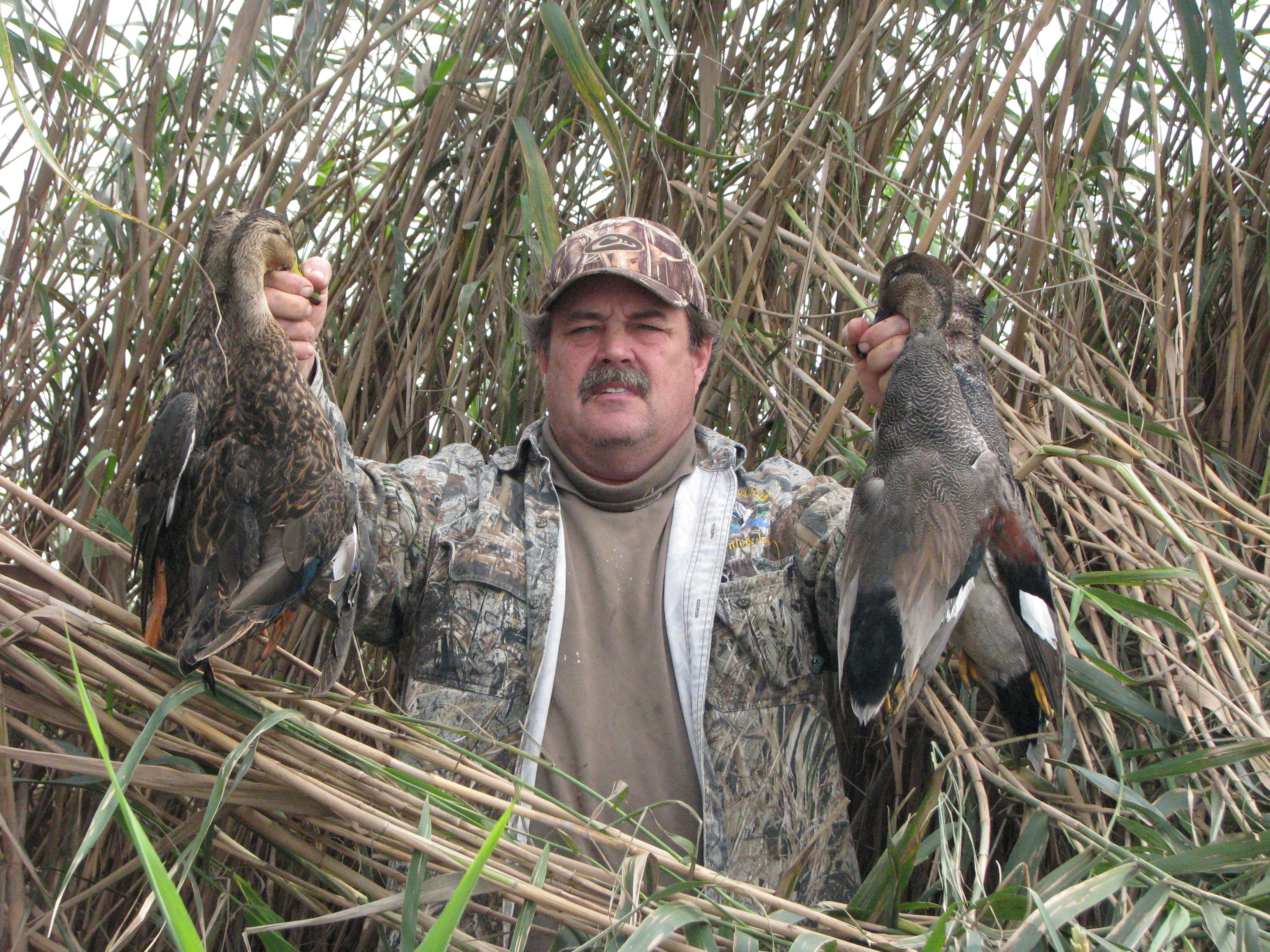 Tommy Lovell of Mobile is looking forward to his 57th year of hunting ducks on the Mobile-Tensaw Delta. Starting back in 1960, Lovell has seen the best and worst of times delta duck hunting. Some things make him shake his head in disgust and some things make him smile from ear to ear.

“Today’s hunting, as in the old days, requires lots of scouting to be successful,” he explained. “You have to be dedicated to finding ducks without spooking them and chasing them off. The most important piece of equipment when scouting is a good pair of binoculars. Today’s young hunters just don’t realize that you can’t run up a bank while chasing up all the ducks and expect them to return. I blame Duck Dynasty on this. The hunters see the Robertsons killing ducks so effortlessly and figure that they can do the same. What they don’t know is that the Duck Dynasty gang is hunting private property, not a public WMA with unlimited amounts of hunters allowed.”

“Blinds were not set as close to each other as the crowded conditions today seem to promote.”

When Lovell began his Causeway hunting career, things were tough! Every duck you got – you earned! No tunnel hull boats or mud motors back then, hunters used muscle power to get to the ducks.

“Oh yeah, it was tougher back then than now,” Lovell said. “It was push poles and mud paddles that got you across the shallows to where the ducks were. You had to know the tides and what a certain direction of wind would do to the water levels. If you got stuck in the mud, you had to get out on your own. You couldn’t pick up a cellphone and ring for help. Sometimes you had to wait for the tide to come back in before you could get out.”

The pressure from hunters was much less than now as well, according to Lovell. Blinds were not set as close to each other as the crowded conditions today seem to promote.

“Years ago, most of the hunters on the delta knew each other,” Lovell recalled. “It was a close-knit community. People knew who hunted what areas and blinds. Often, we would call our buddies to see if they were going to that area so as not to butt heads on a hunt. Those days are gone, I’m afraid. However, all is not lost.” 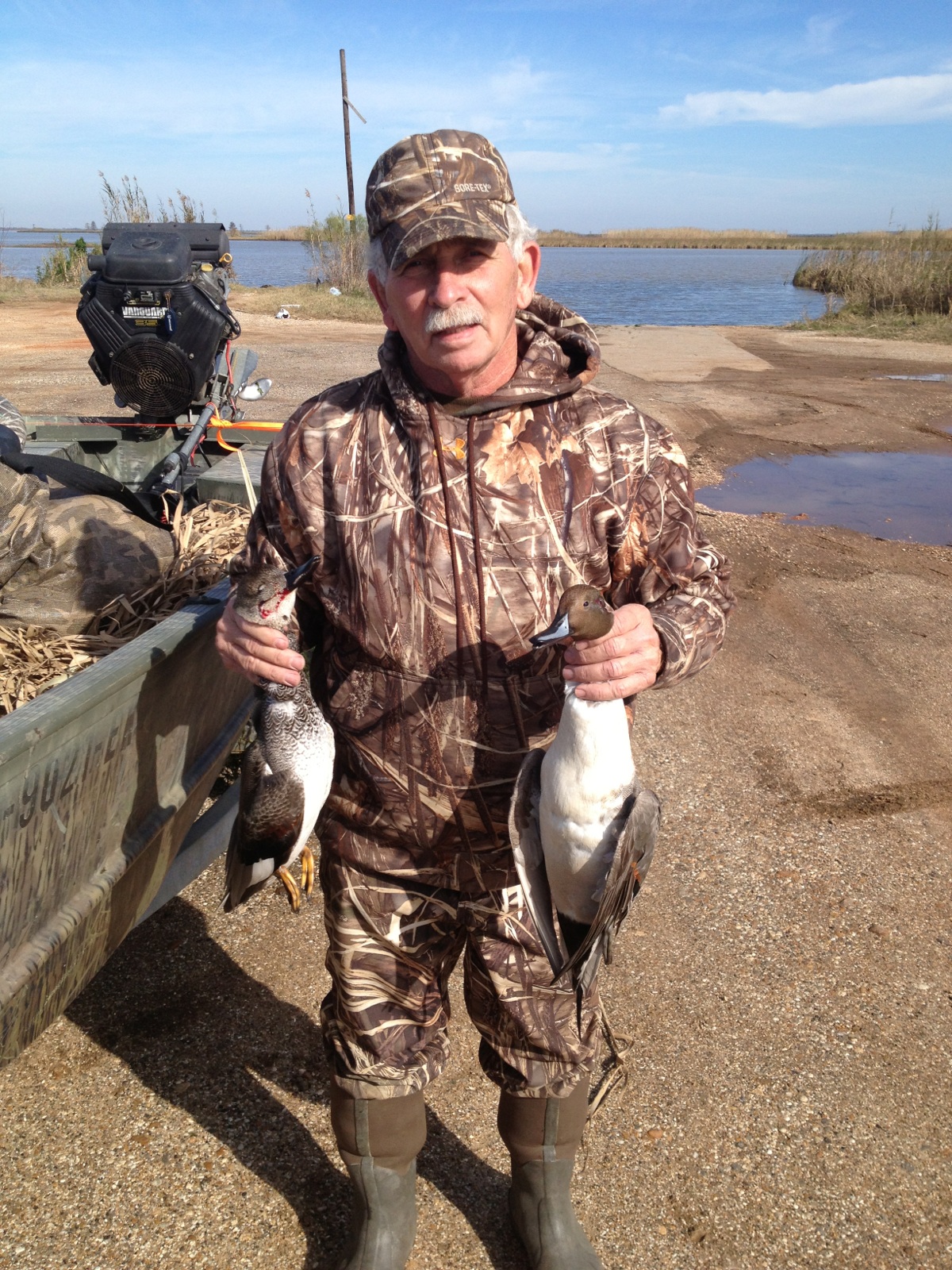 Tommy Lovell used his more than 55 years of experience to take these fine specimens.

Taking delta ducks is still a do-able thing despite the pressure. You just have to pay more attention to details. It’s the little things that make the difference.

Decoy usage is quite important for delta ducks. Lovell had this advice to improve your odds hunting the delta.

“Duck species intermingle, but as a general rule they prefer to feed with their own,” he advised. “With that that in mind, always place your gadwalls together and your teal or widgeon in their own groups. One of the things I’ve learned over the years hunting pressured gray ducks is that they rely on coots to locate the feed for them. Rafts of coots will have smaller groups of grays at the top and bottom of the raft. When I’m targeting gray ducks, I will put three dozen coot decoys together with a half-dozen gray at the top and bottom of my spread.”

Lovell has knuckled under to modern technology and had this to say, “I believe in motion decoys early in the season. I use two just above my spread. One is positioned low to the water with the other set higher. This represents ducks landing behind each other,” Lovell explained. “Late in the season, after the ducks have seen it all, I quit using my Mojos.”

Concealment is very important when hunting the highly pressured ducks of the Mobile-Tensaw Delta. Wary ducks inspect everything before committing to the decoys. Lovell’s thoughts on blinds can help both the novice or veteran hunters.

“Despite the heavy pressure, the Mobile-Tensaw Delta will start to thin out as duck hunters experience tough hunting with meager results. “

“I have a pop-up blind on my boat, but I always carry along some fresh canes to beef it up,” he recommended. “I don’t mind pulling up into an existing blind and using it, but I still pop up my porta-blind. The advantage of the existing blinds is that they are normally taller, offering more overhead concealment.”

Lovell also has some thoughts about blind location. “I try and stay close to the bank when using my pop-up blind. I don’t like to be way out in the middle without any background breakup,” Lovell said.

Despite the heavy pressure, the Mobile-Tensaw Delta will start to thin out as duck hunters experience tough hunting with meager results. Lovell had these thoughts.

“When the hunting gets really tough and the weather turns harsh, a lot of folks quit. That’s probably a big mistake. We get our best hunting then. We need the weather to bring down the ducks, along with high winds to push the ducks off Mobile Bay and up into the Mobile-Tensaw Delta,” Lovell explained.

Almost no duck hunting experience can be complete without the use of a duck call to attract the ducks to your decoy spread. With highly pressured ducks, calling them can really be tricky.

“When it comes to calling, I like to use two different brands of calls. I use an old wooden Duck Commander call and I also use a Buck Gardner acrylic call. I use the Commander first and the Gardner if the wooden call starts to stick,” Lovell said. “I try to restrict my calling, especially if the ducks are coming towards me. Once they turn or bank, I will give them a ‘come-back’ call or a feed call. If I only kill two ducks all day and they have responded to my calling … that’s a good day!”

This year, the state put a couple areas in the Delta either off-limits are restricted the use of gas-powered engines. Lovell had these comments on those new rules.

“Closing the Triangle area behind Ed’s Seafood and out to the Interstate 10 will provide ducks with a sanctuary from hunters. That area has held lots of gadwalls in the past and will be missed by hunters. The next move by the conservation department was to make Big Bateau Bay (AKA Big Batty) push pole in only. No gas engines allowed.” Lovell noted. “Big Batty is in the center of the delta and it makes sense to eliminate mud boats there first. These young bucks will have to show how much they really want to hunt by manning push-poles and paddles to get to the ducks. The other regulation that should help is no hunting on Monday and Tuesday to give the ducks a break.”

The Mobile-Tensaw Delta ducks are some of the most highly pressured ducks on the Gulf Coast. By following a delta veteran like Tommy Lovell’s advice, you too can experience the “good old days.” See you in the marsh!