It never fails; I wake up in the middle of the night before a fishing trip and there is no way I am going back to sleep. I know I should have- it was my 1st day off after having been on a long stretch of mid-summer guide trips and I was really tired. Still, I couldn’t stand at least taking a quick peek out the door at the water in front of the house. That did it — there wasn’t a breath of wind and I could both hear and see the trout blowing up under my neighbor’s light. When I see this, I know night fishing for saltwater inshore species is in my immediate future.

A half-hour later at about 1:30 in the morning I was showered, dressed and launching my Skeeter at Dauphin Island’s east end. It’s almost surreal how quiet it is at that time of the morning and I couldn’t help but take in a minute of the silence before cranking up and getting underway.

My spur of the moment trip night fishing for saltwater inshore species had begun.  My first stop was a set of dock lights directly across from the newly formed cut at Pass Drury. The wind was non-existent, but the current was blasting down the ditch that is normally as busy as Airport Boulevard with boat traffic. I shut off the engine, lowered the trolling motor and drifted towards the lights being as quiet as I could.

When I got in casting range of the outskirts of the lights, I lowered the Power Poles to stop the boat. The action under the lights was something to see. The hard moving current was sweeping shrimp in from the Bay and the trout had them skittering and jumping all over the surface. Often, I’d see trout blow up on a terrified shrimp 3 or 4 times before getting it. The trout turned out to be pretty easy to catch. I was throwing a weightless jerk shad rigged weedless on the edges of the light and allowing the current to sweep it into the arc of the light. When it got inside the light, I’d twitch it — usually, it only took one or two twitches- and the trout would be on. 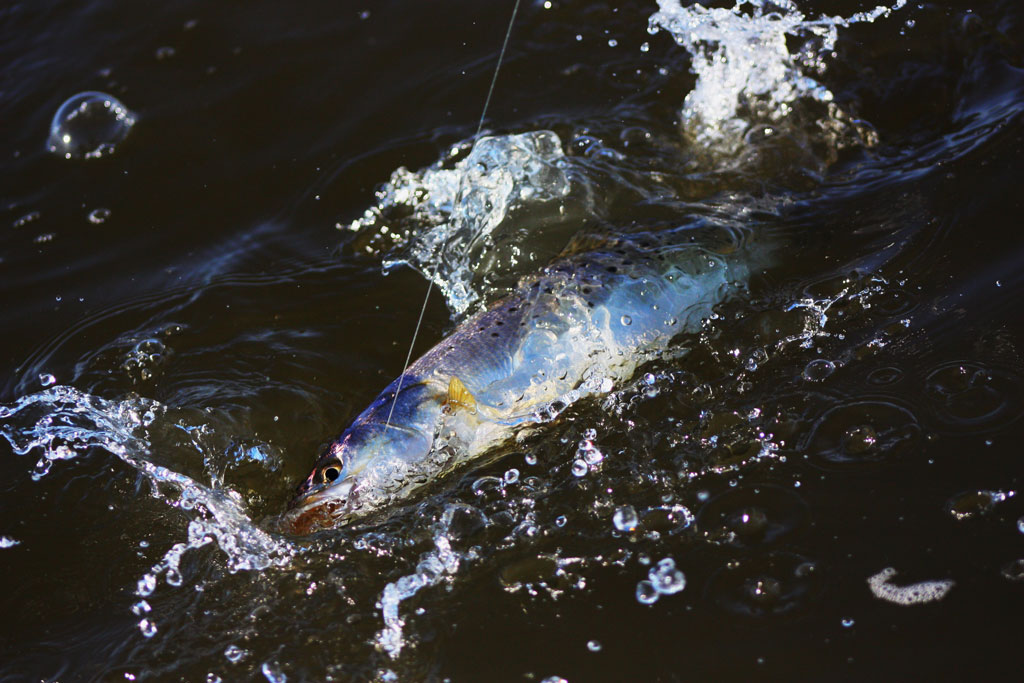 Specks feed on their primary prey (shrimp) under dock lights.

I never caught a giant trout on those lights that night, but at least two times, I saw a trophy-sized trout follow the hooked trout right up to the boat. After a few fish were caught, I decided to move on further into the Colony Cove area. Again, it was neither hard to locate nor catch the trout. Often I could see the action from far away, but the key was to approach quietly and make long casts so as not to spook the feeding fish. The process was repeated a couple of times under more dock lights until the eastern sky began to brighten with the promise of another gorgeous sunrise over Mobile Bay.

My trip was opportunistic, but night fishing saltwater inshore game fish like speckled trout and redfish is a fantastic way to catch them while avoiding the heat of a summer day on the central Gulf Coast. Here are a few tips that can help in making a night trip successful.

It doesn’t matter if it is day or night, summer or winter there are three things that must be done in order to catch fish of any species. You must be around fish, have the right bait on the hook and most importantly present that bait in a proper fashion. Plugging that concept into a trip night fishing saltwater, the first thing that needs to be done is to be around fish. A cool part of night fishing saltwater species is that many of the places that hold fish at night will not produce during the day. An example of that is my first top on the aforementioned trip. The area is a thoroughfare for boats during the day with the water constantly being disturbed by traffic. But at night it is quiet as a church and fish begin to feed on forage that is attracted by the light.

Lights are also the key to night fishing saltwater inshore species like speckled trout. As they are ambush feeders they need to be able to see their prey to feed. Docks are great places to find light, but the gas rigs in both the Bay and the Sound are all also well lit; thus making them great places to target speckled trout at night. Usually, the fish are feeding pretty aggressively if they are not spooked and will hit just about anything. The key, as mentioned, is not to spook them. I like to use subtle baits like a free-lined live or fake shrimp. 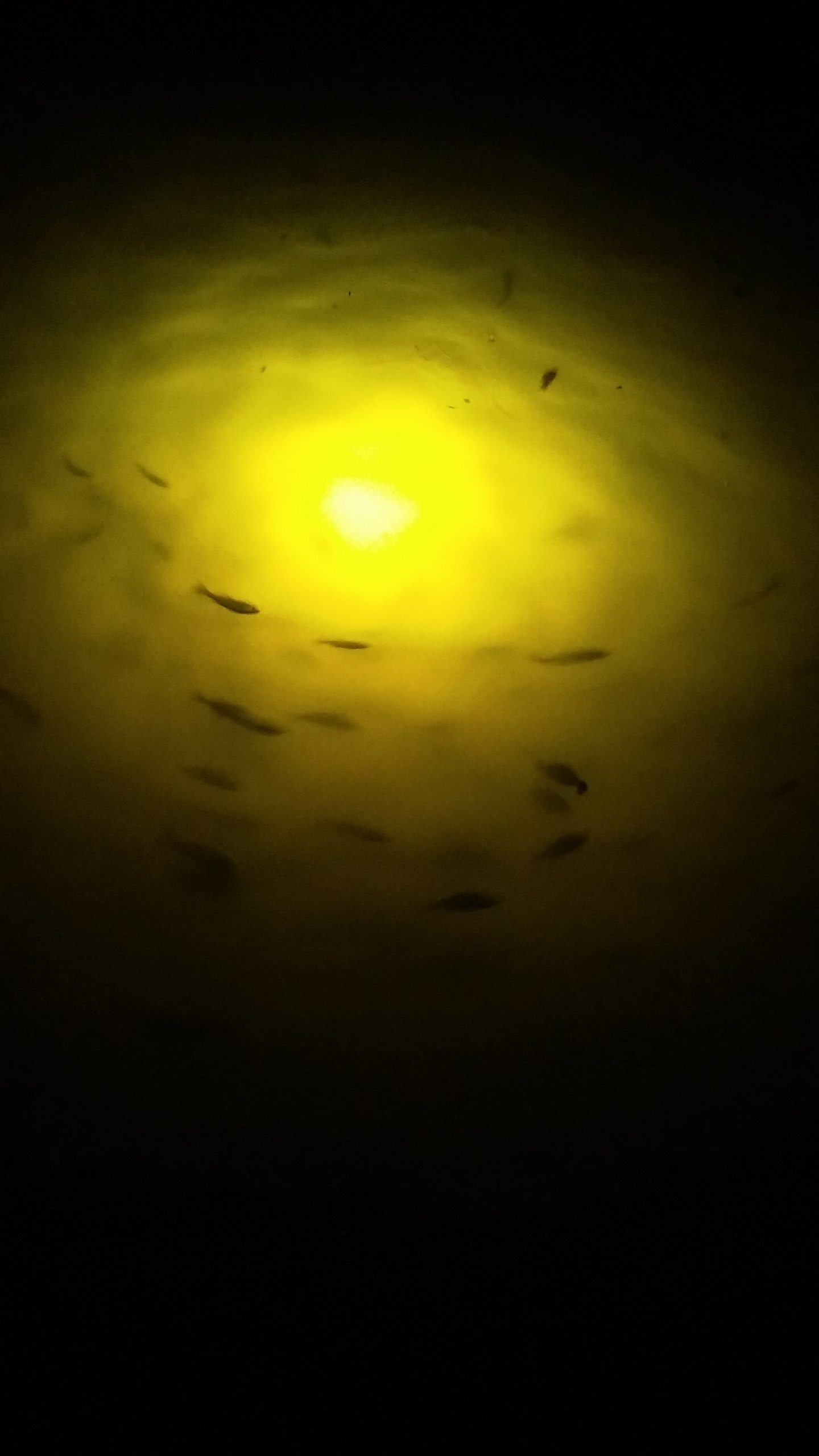 Lighted docks and piers can offer great fishing along with a respite from the hot midsummer sun.

During the day I’d have the same bait under a popping cork, but the noisy corks don’t seem to be nearly as effective on a quiet night. Top waters work as the fish are feeding on the surface, but be sure to cast them so they land well clear of the strike zone and be working the plug into the light. My favorite on calm nights is a weightless jerk shad rigged weedless. It stays very near the surface so I can see it and doesn’t create a lot is noise when it lands so the fish don’t spook. The bite is very similar to a top-water strike too. The weedless feature allows me to get it under docks or rig pilings without hanging up.

Lastly, remember that often docks are a part of people’s homes. Be courteous if they are out on docks by moving on. There is also no need to cast onto a dock or in a docked boat. You’ll have to either leave a hook for someone to possibly injure themselves on or go on the dock or boat to retrieve the lure. That’s a good way to begin a very unpleasant misunderstanding.

Redfish and their cousin the black drum are species that feed using their sense of smell as well as the sense of sight. This makes them super species to target without using lights when night fishing saltwater species. The key is to be using something that emits scent.

Cut mullet, pogies, and fresh dead shrimp work wonders on redfish and a crushed crab is even better for both black drum and redfish.

You don’t need light but you will need current to disperse the scent. Find channels that have moving water even on neap tides. Two perfect examples of a place like this are Grant’s Pass and Cedar Point Channel near the Dauphin Island Bridge. A simple bottom rig is all that is need to catch them but be sure that enough weight to keep the bait on the bottom is used. These species are bottom feeders. I speak from experience here too in the fact that the action in either can be phenomenal during the night by simply tight-lining some fresh dead bait.

The right gear is crucial to any fishing endeavor and night fishing saltwater species is no exception. Keep in mind that you won’t have the luxury of ambient light to assist in seeing. Even the most simple of tasks- tying a knot or removing a hook from a fish- become very tedious when you can’t see. Have a flashlight at the ready and be sure everyone in the crew has one of those little headlamps. They are invaluable for night fishing saltwater inshore species. Sunburn won’t be a problem, so you can trade the sunscreen for the insect repellent. A sure-fire way to ruin a great night trip is to get eaten up by bugs… and on that perfect calm night, you can bet they are going to be the only things biting better than the fish. Navigation lights are required by law from sunset to sunrise. They are also necessary to be safe at night. A boat is literally invisible without lights in the dark and it’s best to assume that you aren’t going to be the only one on the water even when it seems very quiet. Check your navigation lights prior to going out on a night trip. They are notorious for not working when you need them the most. I carry a spare set of battery operated navigation lights just for that occasion. They are a cheap way to stay safe and out of trouble.

A night fishing saltwater trip is a fun way to beat the summer heat: moreover, it’s also an out of this world technique for catching quality fish. As that renowned poet Kenny Chesney sang “Everything gets hotter when the sun goes down!” 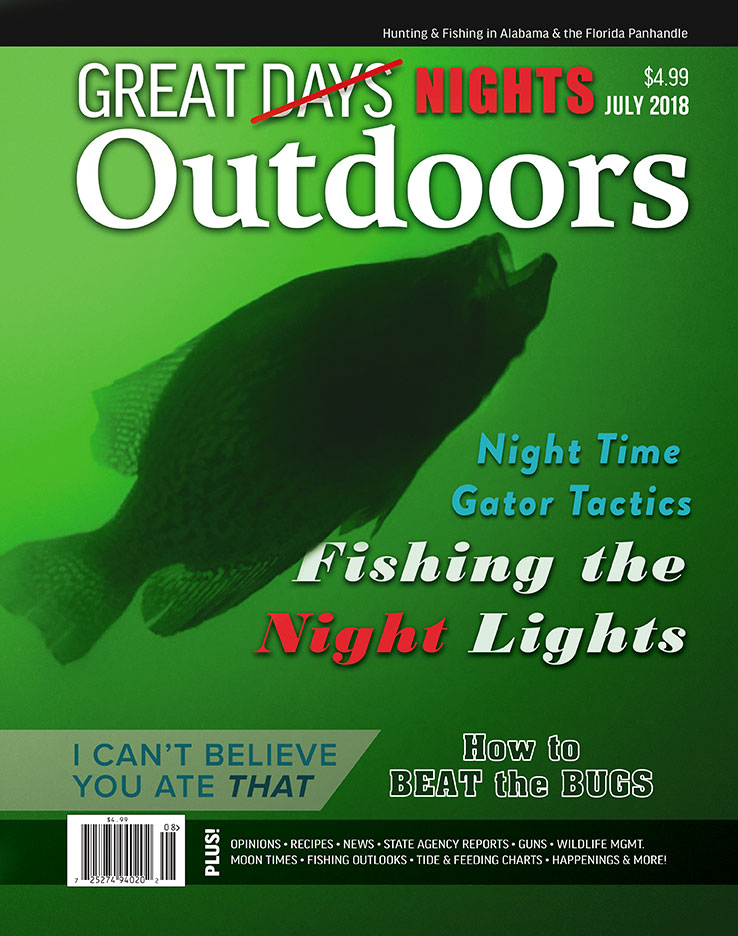 This article first appeared in the July 2018 print issue of Great Days Outdoors Magazine. For more great hunting and fishing content for the deep South, subscribe to Great Days Outdoors print and digital editions or click the image to download this issue.