Want to catch fish, yet avoid the hot weather? It’s easy—fish at night.

The last light of the sunset faded away in the west, and the world over the water was dark except for the lights fixed on the ends of various docks along the shoreline.

The day was winding down, and the lights of the docks helped give a sense of direction to the darkness. Earlier in the day, this same water had been stirred and roiled by high-speed watercraft and big powerboats. Loud music from dockside stereos and radios had kept the noise level high enough to rival the loud gulls. Earlier, the whole situation on this stretch of water was a mess; for anglers anyway.

However, after the sun had gone down, the noise, the hard-charging boats, and even the people had left the water world in peace. An angler in a small fishing boat silently and slowly worked along the shoreline, casting to the water below the lights on the docks.

With the water now calm and quiet, the world was a different place from a few hours earlier.

And the angler connected fairly often with fish and had a good fight getting the speck or red to the boat. By doing a little pre-fishing trip planning and by working in the quiet and dark, anglers can catch some great speckled trout and redfish after the sun goes down. 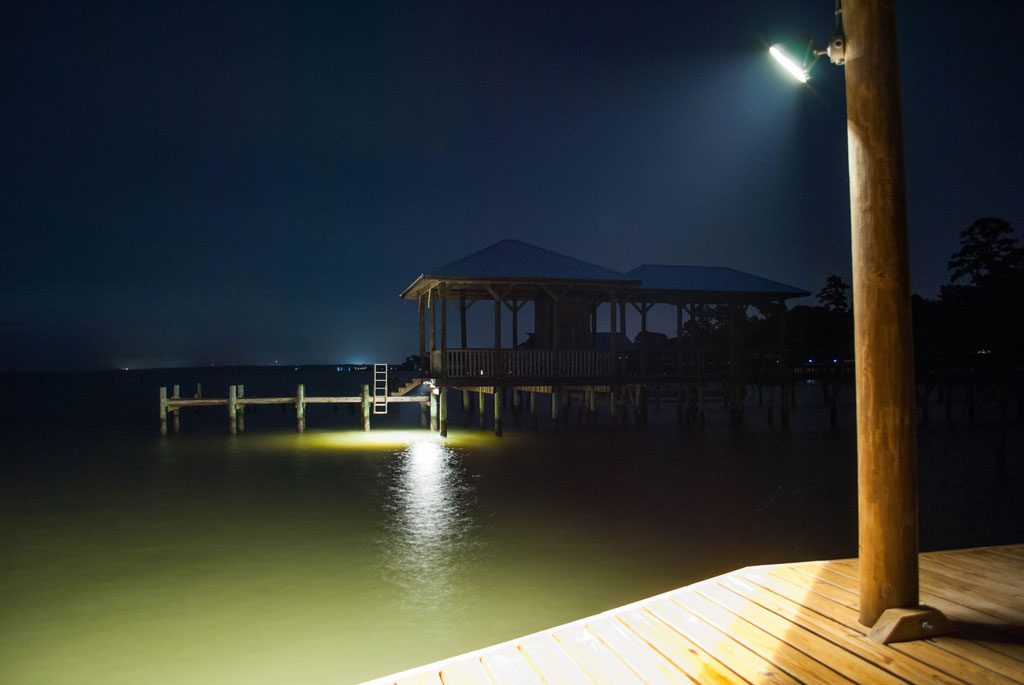 When the sun goes down, look for dock lights. Photo by Ed Mashburn

How Do We Fish at Night?

Fishing the dock lights along the Alabama Gulf Coast is not too hard, but it may take a little exploration and trial-and-error searching on the part of anglers to find the best docks and lights for fishing.

The better dock lights tend to be those that are close to deep water. Shallow water docks tend to not hold as many fish. In general, the brighter the light the more bait and the more fish it will attract. Anglers notice before long that some dock lights are just better than others.

“The better dock lights tend to be those that are close to deep water.”

After this spring’s floods on the Coast, fishing at night is a bit more difficult because many docks on the backwaters and rivers suffered damage from the high water. Many dock lights have been damaged or lost and most have not yet been repaired or replaced.  However, plenty of good dock lights are still there for a nighttime angler to find and work.

So why do the speckled trout and redfish gather below the lights? Sometimes when you get tired of fishing at night, just ease up as close to a lighted dock as possible and watch the patch of lighted water.

A friend and veteran Alabama Gulf Coast angler, Robert Dobson of Foley, gives us some good night fishing tips for when we want to get in a little after-dark fishing.

“I use artificials at night,” Dobson says. “Live bait will work, but if redfish and speckled trout are around, they will hit a GULP on a jighead. My favorite is a three-inch GULP in natural color.”

Dobson continues. “Sometimes I hop it, but usually I just pull it slowly through the light.  You can use top-waters at night in the dock lights, but I find that jigs work better.”

When rigging for night fishing for redfish and speckled trout, Dobson says, “I just use my standard speck rig with 12- to 14-lb test line, and I use a little bit stiffer rod than open water fishing so I can move a good fish away from the dock. I prefer a spinning rig at night because it’s hard to work out a backlash in a reel at night, and level wind reels tend to get backlashes.”

He adds that, “There is absolutely nothing wrong with using live bait for speckled trout and redfish at night. In fact, I have caught more nighttime fish on live shrimp and bull minnows than any other way. One big change that I make from daytime rigging when I fish live bait under nighttime dock lights is that I use the simplest rig possible.”

“For aggressive nighttime speckled trout, I use a kahle hook and no weight and no cork,” Dobson says. “I toss the live bait up-current of the light and let the water movement take the bait naturally into the lighted ‘killing zone’ where the fish are feeding.”

As the live shrimp or bull minnow is swept closer to the lighted water, it will almost always start to get very nervous. When the shadow which is a big speck or red rises up on the live bait from below, very often the alarmed bait will jump and make every effort to escape.

“They don’t like the looks of those mean old redfish and speckled trout coming too close,” he says. “This excited and desperate attempt to escape is more than most speckled trout and redfish can resist. Finally, the deal is sealed when the shrimp or minnow disappears in a swirl and violent strike from the big fish. I find nighttime live bait fishing under the lights is a very exciting way to fish, and it’s very productive, too.”

For best results when fishing for redfish—some really big over-slot-size reds visit many nighttime dock lights—it’s a good idea to put just enough weight above the hooked shrimp or minnow to slowly take the bait toward the bottom. A split-shot is usually enough.

Many times, the reds will be feeding in the deeper water below the light and below the top-feeding speckled trout. A nighttime angler fishing on the bottom under dock lights should not be at all surprised if a delicious flounder takes a turn at a jig or a live bait.

As far as the phase of the moon goes and its effect on fishing, Dobson says that he hasn’t noticed too much difference on the fishing between the moon’s phases.

“A full moon really just makes it easier for the angler fishing at night,” he says. “It’s easier for an angler to see under a full moon, but it doesn’t seem to make much difference to the fish.” 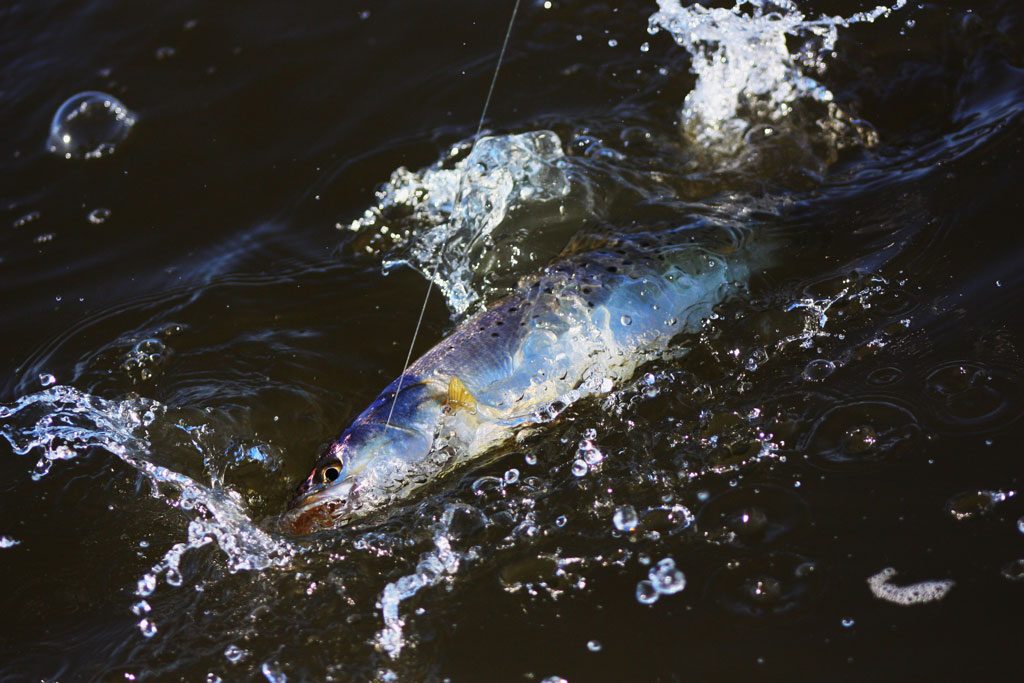 Where Do We Fish at Night?

Anywhere along the bays, rivers, and even the ICW where dock lights shine on the water

has the potential to produce great nighttime fishing.

If an angler has foot access to a lighted dock, it’s very possible to catch some great speckled trout and redfish without having a boat. However, fishing dock lights from the same dock requires an angler to be very, very quiet. Nighttime fish will detect heavy footsteps on the dock above and will simply fade away into the darkness and stop feeding.

One of my best nighttime dock light fishing situations occurred many years ago when I worked the nightshift. My shift ended at midnight, and I was never ready for bed when I got home. So, I’d grab my rod and a few hooks and then silently walk out behind our house on the ICW to the lighted dock.

“No matter where an angler decides to try dock light-fishing on the Alabama Coast, the potential is there for some memorable fishing.” — Robert Dobson

Moving very slowly and making not a sound, I would lift the previously-loaded minnow bucket from the water and make my way to the dark end of the dock, away from the single dock light. Then I’d wait until the feeding fish came back to the light. It never took long for the fish to return.

I learned a lot about how and why speckled trout and redfish feed from watching those fish under that dock light. My most effective fishing technique was the simplest. I would drift a live shrimp or bull minnow from the dark end of the dock into the patch of light, and on most drifts the bait would disappear with a loud “pop” when a speck or red took it.

I learned that after two or three fish were hooked and caught, the other fish working the light under the dock would get shy and move away. If I gave the water 15 or 20 minutes to rest and get quiet again, the fish would come back.

That’s a good thing to remember even when boat fishing at night. If the bite slows below a certain dock, move off to the next one and come back quietly to the hot-bite dock later.

No matter where an angler decides to try dock light-fishing on the Alabama Coast, Robert Dobson says the potential is there for some memorable fishing.

“I think you’ll probably catch more speckled trout than redfish, and I think you’ll catch more quality fish under the lights this year. So far this year, the fish have been better quality and bigger than in past years.”

Special Problems/Concerns When Fishing at Night?

Of course, the biggest difference between fishing during the day and fishing at night is that we can’t see nearly as well once the sun goes down. That means we really need to slow down when under power and look for other folks’ boat lights on the water.

“Make sure you comply with safety laws,” Dobson says. “Have your PFD on at all times.  Also, be very quiet when fishing around folks’ docks. Keep talk and other noise to a minimum. Don’t bring dock owners out to complain about too much noise around their docks and homes. Be courteous and polite at night.”

Also, he points out that getting on a dock from a boat for any reason is a really big no-no. “If your lure gets hung up on a dock, break it off,” he says. “Don’t try to get on the dock to retrieve the hung lure. Dock owners tend to be nice people, but they don’t want you on their docks.”

Finally, when the experienced angler was asked to name the biggest mistake that anglers make when fishing at night, Dobson doesn’t hesitate. “Noise,” he says. “Dropping things, banging the boat, talking too loud; these will kill the bite. At night, the fish rely on sound to warn them of danger, and if you’re too noisy you won’t catch fish at night. Avoid running up too close to the dock and its lights. Keep away and keep quiet for best nighttime fishing.”