One Year After BES (AB)… A Sydney Update

It’s been a difficult year for Syd and me both.  But, we are going to make it.

As most of you know, my baby girl, BES, passed away on November 19, 2016 after almost 13 years of making my life better.  I penned an article in December, “Opening Day Will Never Be the Same,” that hit the shelves in February, and the response I received from the readers of GDO was overwhelming to say the least. It’s amazing how a good dog can impact our lives in such a profound way.

It was by far the hardest article I’ve ever written. There was so much I wanted to say about how much she touched not only my life, but the lives of others. I had no clue how I would ever be able to capture her positive impacts in 1000 words or less, and I was also afraid people wouldn’t “get” it. Boy, was I wrong! I received calls, letters, and emails for months from complete strangers after the article was released. All of us “dog people” share a special bond with our furry critters as well as others like us. I have been writing articles for GDO for almost 5 years now, and the response from that one article was greater than all others combined.

I would like to thank everyone who reached out to me. Many tears were shed as were many laughs. One common statement in all of the correspondence was “Thank goodness you have Syd. Y’all can work through it together.” So, on the one-year anniversary of her death, I felt it appropriate to give everyone an update on how Syd has progressed one year AB. 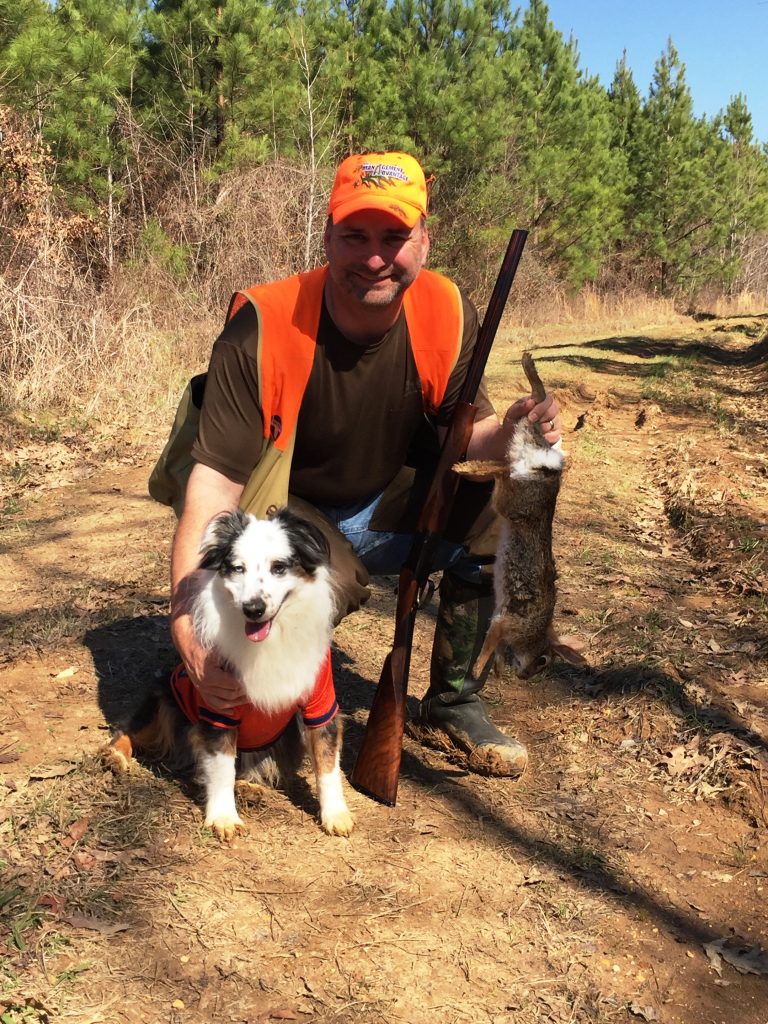 It has been a year filled with ups and downs and many, many firsts. Syd had been a follower his whole life. His mother was BES’s grand-niece, and the resemblance was uncanny. So, when he came home from the breeder, he looked at BES as his mother. He blindly followed her wherever she went and whatever she did. He never had to think on his own. So, when she was no longer there, he had to think for the first time in his four years of life. Where BES was my Doodle Bug, Syd was always my Goofy Little Man. I really didn’t think he would ever have the mental capacity BES had, and during the first six months after her death, I was convinced!

One of the many things BES taught me was to let her and now Syd progress at their own pace.  Don’t push, and be supportive. Talk to them like a human and explain things well, and eventually it would all click. As with most things, she was absolutely correct. I never had to teach her anything; all I did was expose her to a multitude of activities and allow her to figure out what I was doing and what I needed her to do. I was hoping during Syd’s first four years of bumbling around behind BES that he’d picked up a few things. But to be honest, I was not counting on it.

The first few months was tough on us both. Neither of us knew what to do. Deer season was a complete bust. My heart wasn’t in it, and the couple of blood trails I put him on, he couldn’t care less about finding a deer. Trailing wounded deer was BES’s specialty. She was a master at it, and I’d grown accustomed to having her find deer for me and especially others. So, deer season was a huge disappointment.

Where BES was focused specifically on deer recovery, Syd had shown signs of liking other things like squirrel hunting and retrieving. So, taking BES’s advice, I let him progress on his own and choose his own path. I just carried him on as many hunts as possible and exposed him to as many different things as I could.

Although he didn’t impress me during deer season, he did seem to enjoy going wood duck hunting, and he retrieved a couple, but FYI, he’s not a big fan of feathers in his mouth. During squirrel season things improved some more. Not only did he like retrieving the squirrels when they fell like he had done when BES was alive, but he was now paying attention to the other dogs and learning to smell and tree the squirrels. So, maybe Syd was going to be the proverbial jack of all trades and master of none. Not what I was hoping for, but if he was happy, I was too.

February was a full month of firsts for Syd. He went on his first rabbit and quail hunts. He enjoyed both hunts and retrieved my rabbit and several quail. One big first for Syd, and something BES had never done was accompanying me to a Conservation Advisory Board meeting at Lake Guntersville State Park. He wasn’t too impressed with the function and politely slept under my chair the whole time. He also participated in his first prescribed burn.

“I may not have the blood trail specialist I was hoping for, but who else could say they have a dog that will retrieve ducks, doves, and quail and tree squirrels?”

The next few months Syd and I spent quality time together building our relationship. He had always been my number two.  BES was my pride and joy. So, I had to treat him like number one now. That was my job, building up his confidence and placing more responsibility on him. I had never given him any responsibilities; I just let BES take care of everything. His lack of progress was my fault, not his. I needed to step up my game.

These dogs thrive on having jobs, and I started giving him the opportunity to step up and be “The Man.” Needless to say, he didn’t disappoint. When hunting season came around this year, he was ready. I carried him on a dove hunt opening day just to be my companion. I picked up the first bird I killed, and after that, he was a machine—marking birds, blind retrieves, water retrieves, the whole nine yards. By the way, he still doesn’t like feathers, but he powered through. The folks who laughed at me for having a miniature Aussie on a dove field were now eating their words!! 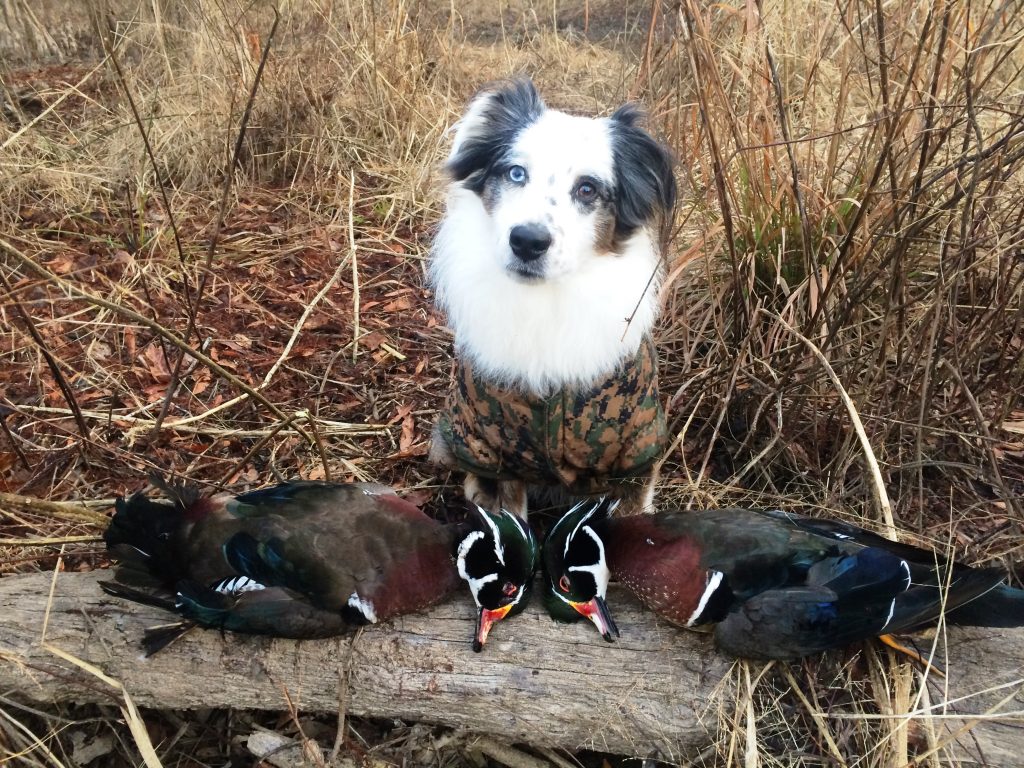 Not Better, But Different

I may not have the blood trail specialist I was hoping for, but who else could say they have a dog that will retrieve ducks, doves, and quail and tree squirrels? That answer is simple, nobody. I carried him with me on a bow hunt in Illinois the first week of November. A friend shot a big deer the second afternoon and asked if we could come help him find it. I wasn’t expecting Syd to show much interest based on last year’s performance. But I was wrong. We trailed the deer for over three miles. He was incredible. He made one more extremely impressive trail while we were there. Where BES was wide open, basically a maniac until she could find it, Syd was very slow and methodical two polar opposites but with equally impressive results.

We will never forget BES and what she accomplished in her life or try to replace her. She was and will always be my baby girl. But Syd has stepped up and is carrying on her legacy, and I wouldn’t hesitate to say she is very proud of her protégé. During the first year AB, Syd dropped the “Goofy” from his name. He is now just my Little Man, Master of All Trades!!