Opening Day Will Never Be The Same | Great Days Outdoors

Opening Day Will Never Be The Same

Opening day of the general firearms season has been something I’ve looked forward to with much anticipation throughout the years.

As a young child in the mid-1970s, opening day meant meeting up with friends and family at the hunting camp early Saturday morning to saddle up the horses and turn the dogs loose for a deer drive. By the mid-1980s, opening day excitement had transformed to concentrating on the first sit on a winter wheat field that afternoon. By the mid-2000s, the excitement of opening day revolved around my little female miniature Australian shepherd, BES, and her getting the opportunity to blood-trail a deer. It’s amazing how priorities change as we grow older.

Since my wife and I don’t have kids, BES was basically my fuzzy 4-legged daughter. She went everywhere with me. She was my constant companion. It didn’t matter whether I was in Illinois, Ohio or Alabama doing a consulting job, she was with me. If she wasn’t welcomed, I didn’t go. It was just that simple. 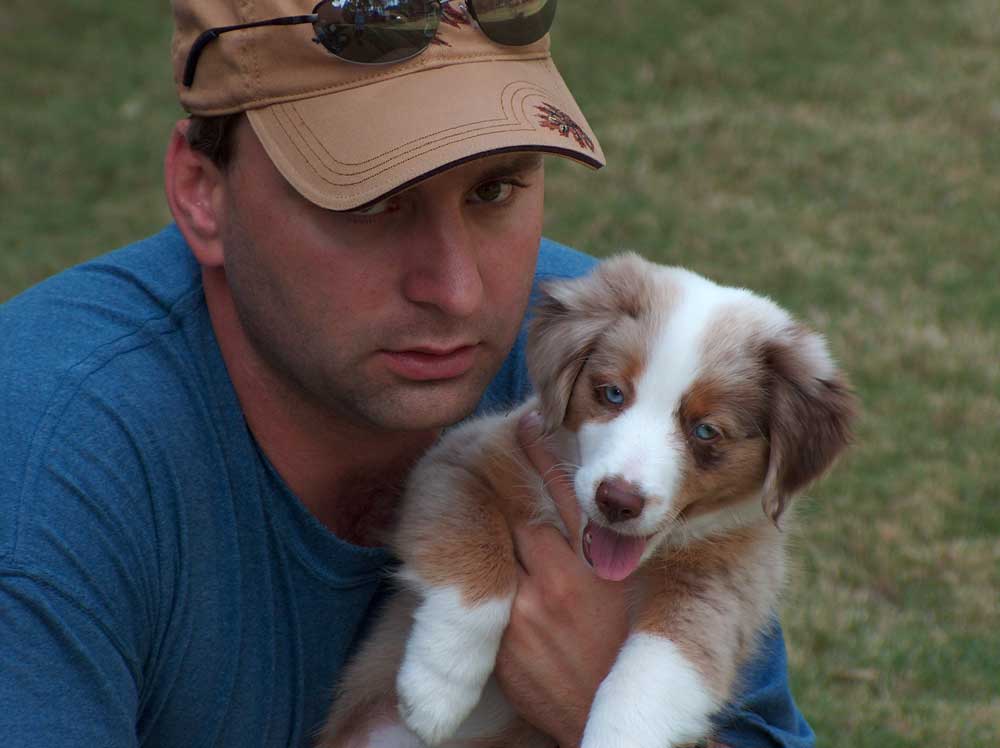 Despite the fact that she was a herding dog and was bred to work by sight, she had an incredible nose. When she was only six months old, she was with me one morning while I was on my hands and knees following a sparse blood trail through a pine plantation. She was so attentive to my needs that she figured out what I was doing and eventually found the deer before I did. She was scared to death of it, but she found it.

So, from that point forward, I made a conscious decision to let her look for every deer I shot. By the time she was 5 she was a blood-trailing machine. She found countless deer for hunters that would have taken us hours if not days to find. She truly had found a job that she knew would make me and others happy.

Not only did she enjoy the track, she also enjoyed the hunt. I started taking her to food plots in the afternoons with me at first. Then, we progressed to actually going and sitting in the woods next to a tree. Believe it or not, she would lie next to me with the wind in our faces and would start shaking when she smelled a deer. I eventually learned to pay attention to her body language and start looking.

She was also an experienced truck, tractor and ATV driver as well as TV personality. She spent countless hours in my lap traveling the country, planting food plots, hanging stands, and assisted me while filming our television program. BES had more fans than I did. 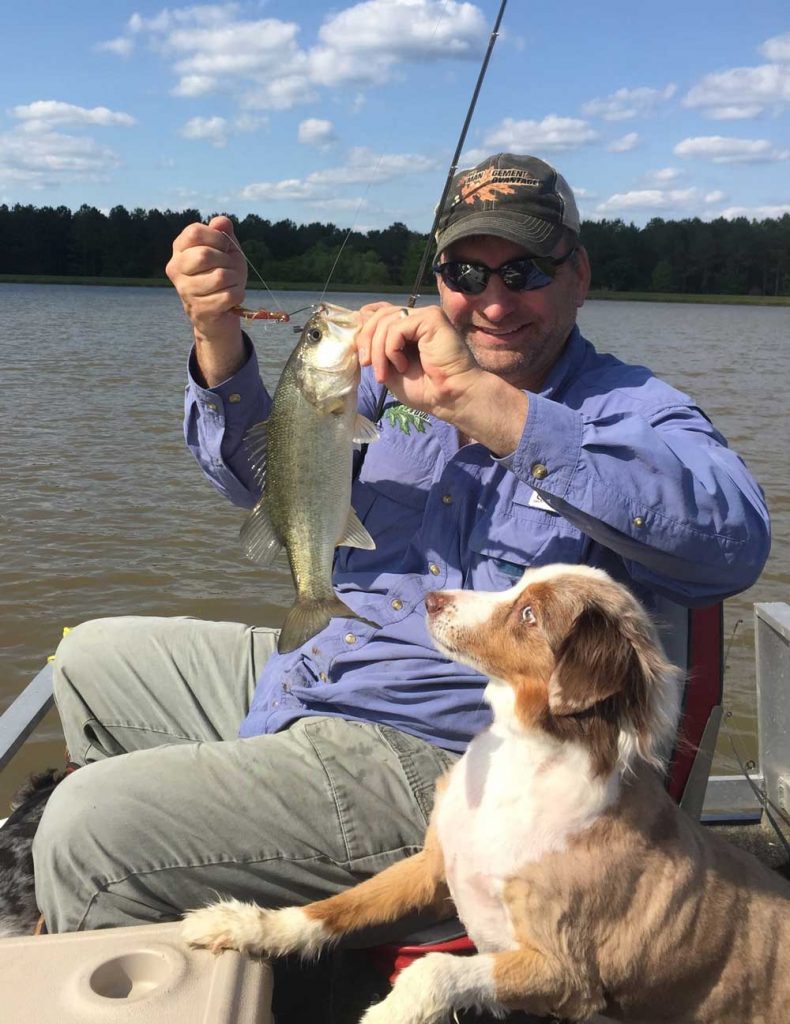 BES was an accomplished fisherwoman. Photo courtesy of Chuck Sykes

She was a survivor and all-around tough old broad. At the age of 6, she survived a serious cancer surgery. One ACL was replaced at age 7 and the other at age 8. Her biggest challenge arrived shortly after recovering from the second ACL surgery – little brother Sydney. I agree with the famous writer Agnes Sligh Turnbull when she said, “Dogs’ lives are too short. Their only fault, really.”

I could see the handwriting on the wall and knew the day would come when I would eventually have to deal with her death. I also knew I would need some serious help coping. I was hoping Syd would be the Band-Aid my heart would need to make it through those tough times.

BES was a real trooper. Not only did she put up with an annoying little brother, she did what all good big sisters do and taught him the ways of the world.

The three of us had several great hunting seasons together and this year was looking to be no different. Despite the fact that BES was 12, she was in incredibly good shape considering the previous surgeries. However, a new ailment arose the last week of October. When antibiotics didn’t fix the issue, an MRI on Nov. 3 revealed she had two tumors, one behind her left eye and the other completely filling her left nasal cavity.

Needless to say, we were devastated. Her vet suggested I take her to the hunting camp for the weekend, basically as one final hunt. Then, we would discuss a plan forward on the following Monday. I took off work that Friday and drove to Choctaw County. She acted like a puppy all weekend. We hung stands, went to the farm and barked at cows, and even trailed a deer for a friend. How could this be her last hunt?

We were at the vet Monday to discuss a proper plan of action. We basically had two options, put her down in a month or two when the tumor in her nose ruptured or try surgery to remove the tumors. The doctor said he was confident that the surgery would be a success and she would be hunting by Dec. 1. Surgery went beautifully on Wednesday, Nov. 16. The plans were for BES to stay at the vet through the weekend for observation. The sinus packing would be removed on Saturday. We could bring her home Sunday when Syd and I got back from the hunting camp. 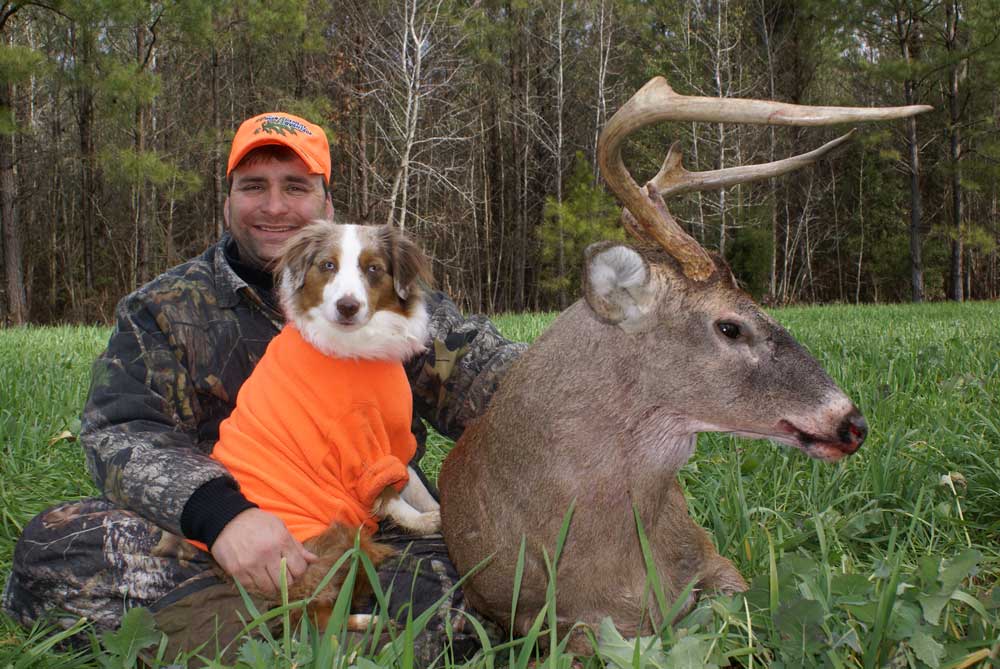 BES found this Dallas County Buck for me in 2006. Photo courtesy of Chuck Sykes

My world was turned upside down when the vet called around noon on Saturday, Nov. 19 and said BES had passed away from an apparent heart attack during the packing removal procedure. I didn’t know what to say or to do.

I’m quite sure many who read this will not understand, but fortunately, many will. It’s hard to explain the emotions. I guess everyone handles grief in his or her own way. All I knew to do was to take Syd hunting. So, there I was opening day of the Alabama gun season sitting in a box stand overlooking a dirt food plot crying like a baby because my little girl was gone.

A friend who was hunting with me shot a deer at last light with his bow and asked me to bring Syd. He had never trailed a deer by himself. He had never done anything without the supervision of BES. I put his orange jacket and lighted collar on him and explained the best I could that it was all up to him now. I was shocked and amazed to see how well he did. Then again, I shouldn’t have been; he was trained by the best! The day I lost my favorite hunting partner, my little boy found his first deer by himself. I was a bundle of emotions, proud for him and missing her.

At the time of this writing, I’ve had one week to try to process the life and times of BES. I still can’t believe she is gone. However, I know she made a lasting positive impression on thousands of people across the country. The outpouring of support from friends and her TV fans has been overwhelming. Sidney Jeanne Seward said, “Blessed is the person who has earned the love of an old dog.” I can tell you today my friends, I am a very blessed man!