A whole generation of anglers is growing up unaware of the potential of fishing pork rind baits when used as an added attraction for a wide variety of artificial lures. The undulating strips worked a strange magic on generations of both freshwater and saltwater fish, but recently disappeared from the market. That’s a shame, because short of dressing your offering with a live shiner or sardine, there’s no better way to increase the effectiveness of many jigs and spoons.

Uncle Josh, venerable supplier of the best pork rind fishing baits for nearly 100 years, has posted an “Officially Sold Out” on their website. Company officials cite rising cost of obtaining and properly preserving prime pork skin as the issue. (The company continues to offer other fish attractors, however.)

Still, that does not mean that the ability of the swimming strip design to catch big fish has ended.  Fishing pork rind  baits can be an effective fish catching technique.

In fact, when it comes to bass fishing, the “allure of the lure” has never been greater, because not only has a generation of bass anglers grown up unaware of rind, so has a generation of bass.  Largemouths, which are primarily a catch-and-release species these days, as a result are notorious for becoming “lure-shy”. When a hot new bait hits the water, it destroys the fish for a season or two, then the effectiveness fades as the majority of bass become wary of it.

Having been absent from the fishing mainstream gives pork rind baits, added to another nearly forgotten old favorite, the weedless spoon, a big fishing advantage.

In fact, at the right time of year, February through April, and in the right places such as lily pad fields and bulrush flats among others, there’s not much short of a live shiner that gives you a better shot at putting a trophy-class Florida largemouth in the boat than hanging one of these big, squirmy trailers on a weedless spoon. Fishing pork rind baits is also deadly when slow-rolled through scattered hydrilla, milfoil and coontail.

And fortunately, there are a few sources of plastic rinds that are turning out trailers very close to being as functional as the original pork and they’re made in a wide variety of colors and shapes.  That breathes new life into the art of fishing pork rind baits

There are several advantages to the “spoon-n-rind” over most lures.

First, it’s a big mouthful and big bass like big mouthfuls. Add a four inch rind to a three inch spoon and you’ve got what appears to be a half-pound shiner or shad flashing through the water but one that you can still cast easily on standard bass tackle.

Secondly, you can pull these rigs through practically anything, even lily pads, without sticking. In fact, they work best in the thick stuff, weeds where you’d normally be confined to flippin’ a heavy jig or hopping a weedless frog. Anywhere there’s any open water at all over heavy weeds, it’s worth trying the spoon-n-rind.

Standard retrieve with this setup is simply to heave it out there on fairly heavy gear, 20 pound test mono or braid heavy enough to work well on your baitcaster.  In terms of the retrieve, crank it back at the speed that makes the spoon wobble and flash, hook up, without sinking. The wobble of the spoon puts a snake-like flutter into the tail. The hook on these spoons ride up, helping to make them weedless, and most models have a wire guard. 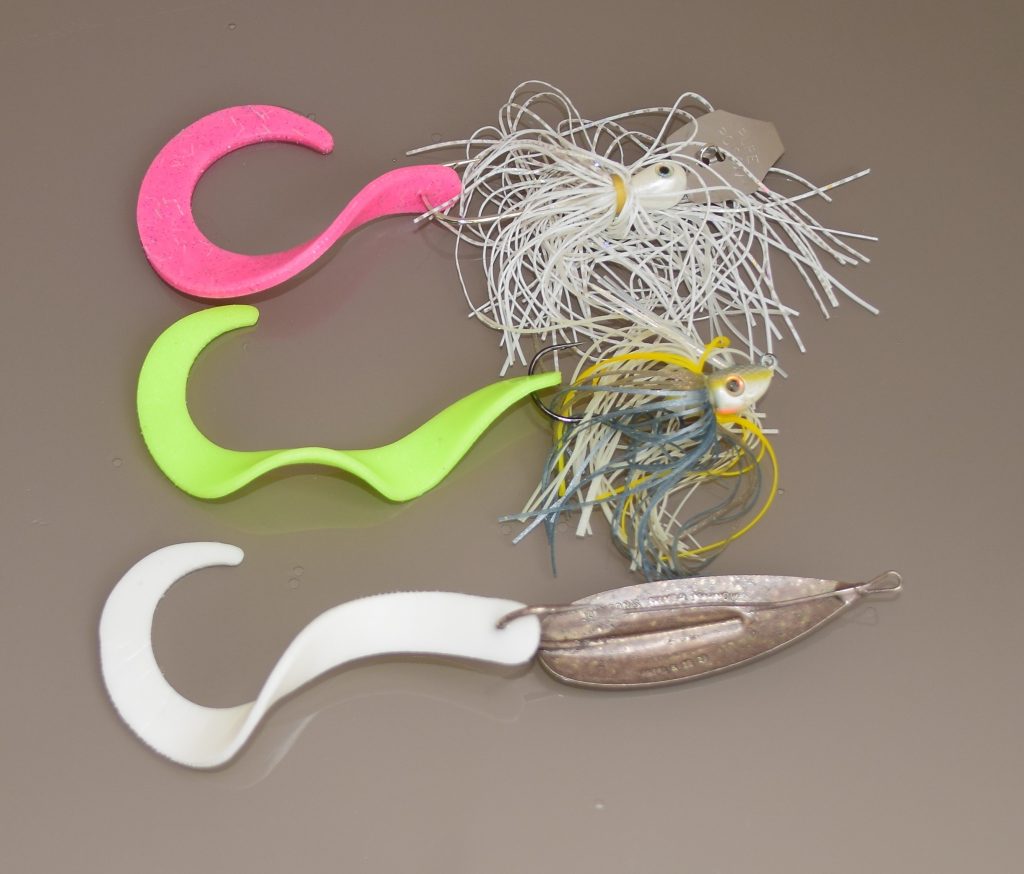 Fishbites curley tail pork rind baits, when fished with a spoon or a jig create an almost irrestible “allure of the lure”

The Johnson Silver Minnow is the classic weedless spoon and it is still in production after nearly 80 years.  It provides a great rolling action but for these best results the hook needs touching up with a file before use. The Bass Pro Shops XPS Laser-Eye Weedless is also outstanding, and has a better hook that’s sharp right out of the box. The Bagley in ¾ ounce is also very good and casts a mile. The H&H Weedless Redfish Spoon is also a good one with a quality hook, and comes with a swivel attached as well as a plastic weedguard over the swivel. Best sizes for me have been the ½ and ¾ ounce models, with the larger one preferred for lunker bass pre-and-post-spawn.

The better weedless spoons will usually land hook up if you thumb them to a stop over a target, rather than just flinging them as far as you can.

There are subtle paths and holes in most weedbeds and learning to see these and guide the spoon over them is part of having success with this tactic. Scattered maidencane, bulrush, duckweed, hyacinths and lily pad fields are all prime, though you have to learn to steer your line away from pad “crotches,” because even a spoon-n-rind will stick occasionally in these.

Holding the rodtip high will cause the lure to skitter over stuff that might stick it, like thick hydrilla or coontail. Dropping the tip and slowing the retrieve will allow it to flutter down into the occasional pothole. The idea is to constantly stay focused on what the lure is doing and stitch it in and out of the cover throughout the retrieve.

Setting the hook can be a bit of a test with a weedless spoon. The strike is usually at the surface and often spectacular, which means your tendency is to take the lure away from the fish. Wait until you feel the strike and you’ll rarely miss one.

The standard weedguard on a Johnson Silver Minnow and most similars is straight, it runs from the hook eye to just above the point of the hook, and in fact this is a good position for it if your main concern is getting through the thick stuff. But, this position on a stiff wire weedguard seems to prevent solid hookups in some cases, and when you’re fishing for that one giant bite, you don’t want to miss any fish. One good way to improve on the guard is to put a bend in it about an inch in front of the point of the hook, leveling it off on the same plane as the point. When a fish chomps down on this, the guard will for sure deflect downward and expose the point giving you a very good shot at a hookup. Keep the hook point dead sharp, of course.

It’s also essential to add a split ring and swivel, or a snap swivel, to prevent the spoon from twisting your line, and also to allow it to swing freely for best action.

Though “real” rind is gone, the good news for those anglers interested in fishing pork rind baits is that some of the new pork rind fishing replacements offer the same action with a lot fewer issues. One is the Otter Tail from Captain Bruce Millar, a New England striper guide. He thinks that the 6.5-inch and 3.5-inch sizes in curly-tail are likely to be the winners for the bass market.  (www.otter-lures.com)

Zoom’s Swimming Chunk is a three inch twin tail that can also function as an effective spoon trailer, as is the Strike King Rage Tail Chunk and the Twin Tail Menace. Each of these is soft plastic with a twist that makes them more or less swim like the curly rind used in Uncle Josh.

But maybe the best synthetic rind is from Fishbites, with the quirky name of “Bob’s Your Uncle” Scented Bait Strips. Fishbites is a company well known to saltwater anglers—they make one of the most effective pompano baits on the market, their E-Z Flea, as well as one of the best whiting baits, the E-Z Clam.

Their pork rind fishing replacement is a four inch curly-tail strip made of fiber-infused synthetic material combined with what Michael Carr, VP of Marketing, calls a “hydro-gel”, a substance designed to absorb water and spread the built-in scent, based on the company’s original Fishbites prepared baits developed by his father Dr. William Carr, a marine researcher at the University of Florida. 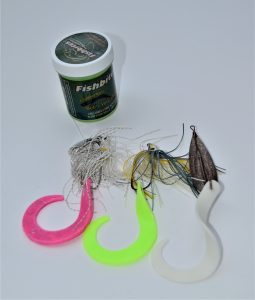 While discovering how marine species detect odors in the water, Dr. Carr began noticing that chemical compounds could stimulate feeding behavior, even in the absence of any real food. He then perfected many recipes, also known as feeding stimulants,  that to fis

h smell like shrimp, crab, clam, squid and a variety of other prey species but have little or no odor to humans eliminating the mess and smell previously associated with fishing pork rind baits

When Carr Specialty Baits was founded in 2000, he also developed the water-soluble base that allows the smell and taste to slowly release into the water. Added to the shaped fabric of the lures, the formula allows anglers to carry packaged baits that are equally effective as naturals, but much more durable, do not spoil and can be molded into fish-attracting shapes and colors. They require no refrigeration, and can last a year or more when stored properly. It’s this compound that’s molded into the Bob’s Your Uncle bait strips.

The strips look like pork rinds, and fishing with these pork find baits duplicate and run with the same fish attracting wiggle when attached to spoons, jigs and spinnerbaits. They attract bass, naturally, but also are proving themselves as great additions to spoons and spinners cast for redfish, snook and trout, as well as jigs fished for flounder.

According to Michael Carr,  these baits are non-toxic, biodegradable, environmentally friendly and they don’t “stink” in the way that some scented lures do, as evidenced by a walk into the Powerbait aisle of a tackleshop. Each jar contains 8 ready-to-go baits with a suggested price of $8.99. Visit www.fishbites.com for details.

The bottom line is that all of these innovations make fishing pork rind baits much easier, as efficient and less messy and smelly as in the past. 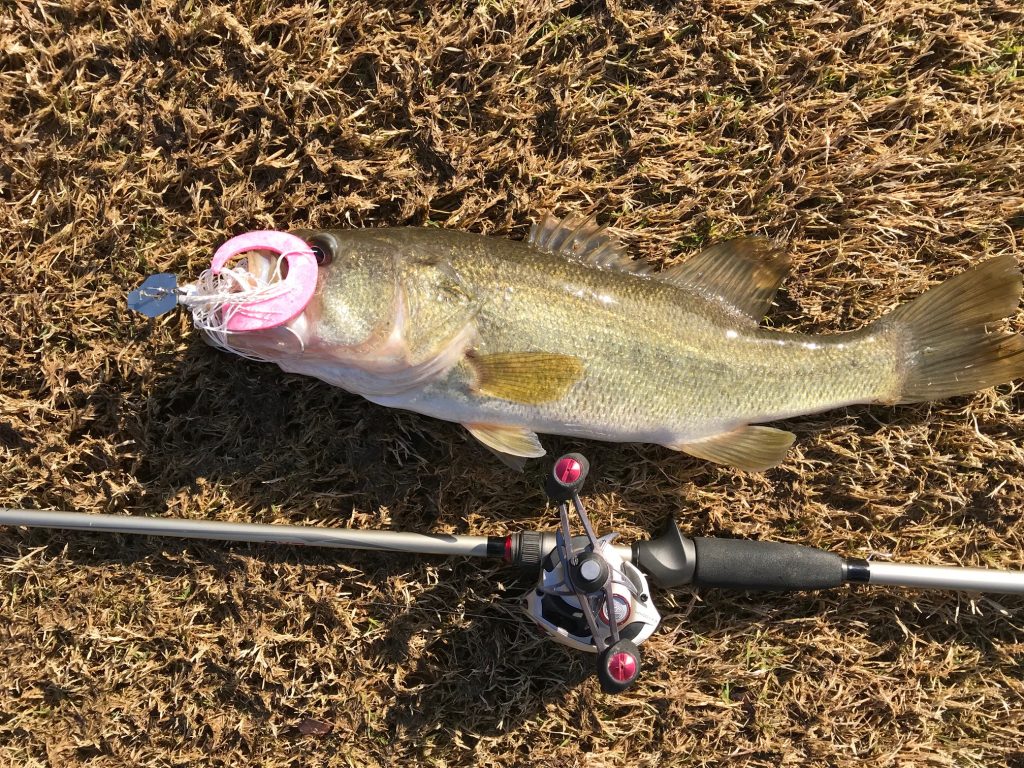 And that quirky name? It was developed by company chemist Bob Buzzi, who had visited England regularly and picked up the phrase which means “you’re all set” or “you’ve got it made”. Add these durable bait strips to your spoons, jigs and spinners and that may very well sum up your fishing day.