How to Pull a Recreational Shrimp Trawl Net

My family and I have been pulling a twelve or sixteen-foot recreational shrimp trawl net for many years. I remember going out with my dad on Mobile Bay at night and what we caught while shrimping was as amazing to me then and it is amazing to me now.

Whether it’s getting up bait shrimp trawling or putting a good load of shrimp in the freezer, setting up a shrimp-trawl for small boats is a lot of fun. The best part is that anyone with a fishing boat and motor can do this and it doesn’t take a $60,000 bay boat to catch a lot of shrimp.

Catching shrimp seems to be designed to provide fun for kids. There’s always something to see, and a whole world of underwater life in our Gulf Coast waters becomes real to young people. And catching shrimp is also a great way to obtain the best possible fishing bait.

Of course, like all things in this world, there are limits on when, where, and how we can go recreational shrimping. It is totally up to the recreational shrimper to know the current rules and regulations, and they do change from time to time.

To begin, on our northern Gulf Coast region, private individuals can trawl for shrimp during open seasons in Alabama, Louisiana, and Mississippi. Florida does not allow recreational shrimpers to use any kind of towed net to take shrimp. 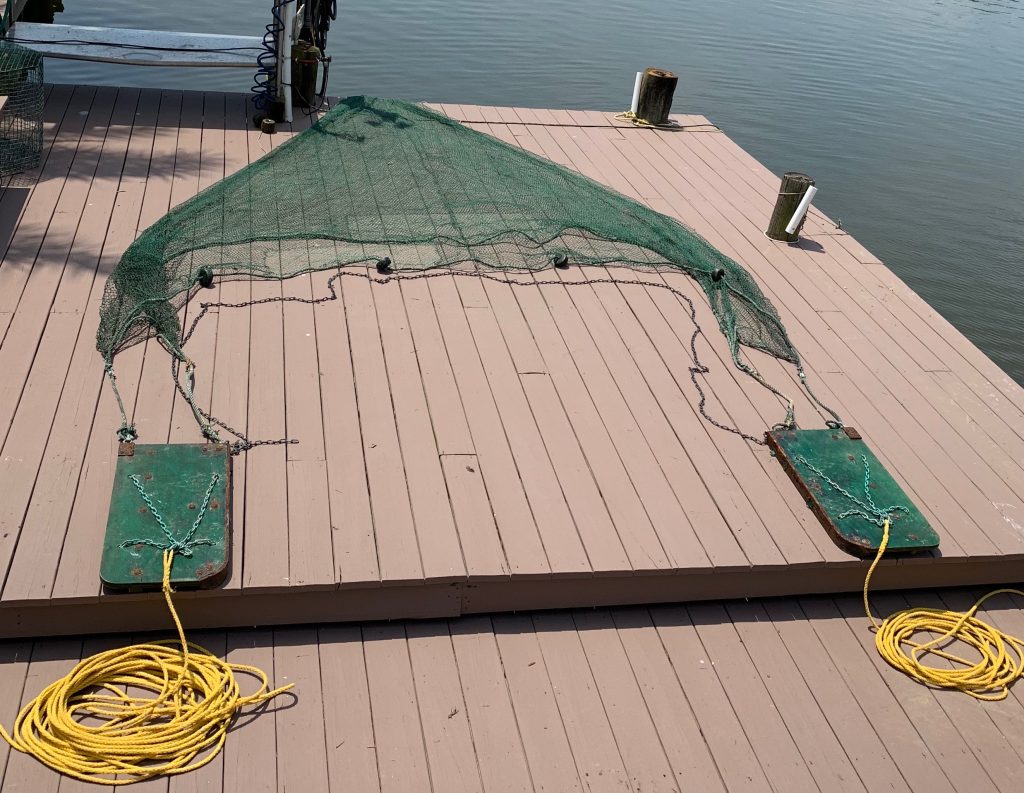 If you are shrimping for bait or just for a nice dinner, a 12 to 16 foot shrimp net is all you need.

My long-time friend and small boat shrimp trawler Justin Ishee offers his experience to us about recreational shrimping.

“In Alabama you can purchase a recreational license which allows you to catch a five-gallon bucket of shrimp per trip for around $28 annually. A commercial license is around $100 and you can keep any amount,” Ishee said. “You can keep crabs and fish such as white trout, flounder, ground mullet, but you’re not supposed to keep game fish, and to be fair, I’ve never caught any in all my years of shrimping.”

There are several specific regulations for recreational shrimpers in Alabama. Make sure you do your homework in your state before hitting the water.

How Does A Recreational Shrimp Trawl Net Work?

Recreational shrimp trawl net consist of long, open at both end, nets with a wide mouth that has two “doors” or “trawl boards”, which are solid metal and wood wings that serve to open the net so shrimp can be gathered up as the boat is slowly motored forward. 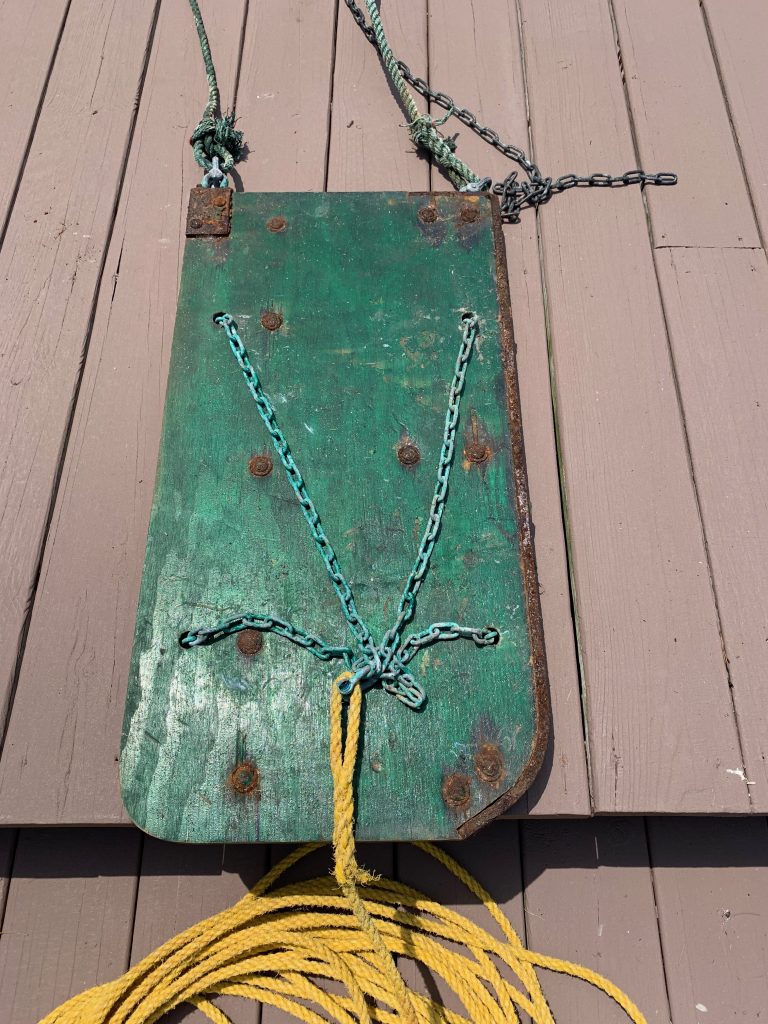 The narrow end of the net must be carefully tied shut so that the shrimp will collect and where they can be easily emptied out for sorting and saving by untying the rope that closes the end. A net end not closed and secured properly means an empty net comes in with no shrimp at all. It seems like a simple thing, but you’d be surprised.

The net, chain, doors and tow lines are carefully passed over the stern of the tow boat, and then the slow trawl begins. The doors should “bust” the net open, and the lead line at the bottom front of the net will help assist in holding the net down on the bottom while the “tickler chain” drags the bottom and makes the shrimp jump up into the open mouth of the net.

When it comes to finding a boat for recreational shrimping, the choice is easy…what you have will probably work. Ishee says, “I have seen small fourteen foot Stauter boats shrimping, so I don’t think there’s a boat too small.”

When it comes to rigging the boat for a shrimp trawl, Ishee advises, “A shrimp net is measured across the front of the net, so a 16 foot net is 16 feet wide. Most people pull a ‘super 16’ net which has higher wings- the sides of the net. The reason you want higher wings is because white shrimp, which are the bigger shrimp, can jump out of the way of a net if they feel it coming through the water, so the higher the net, the better chance you have of catching more and bigger shrimp.” 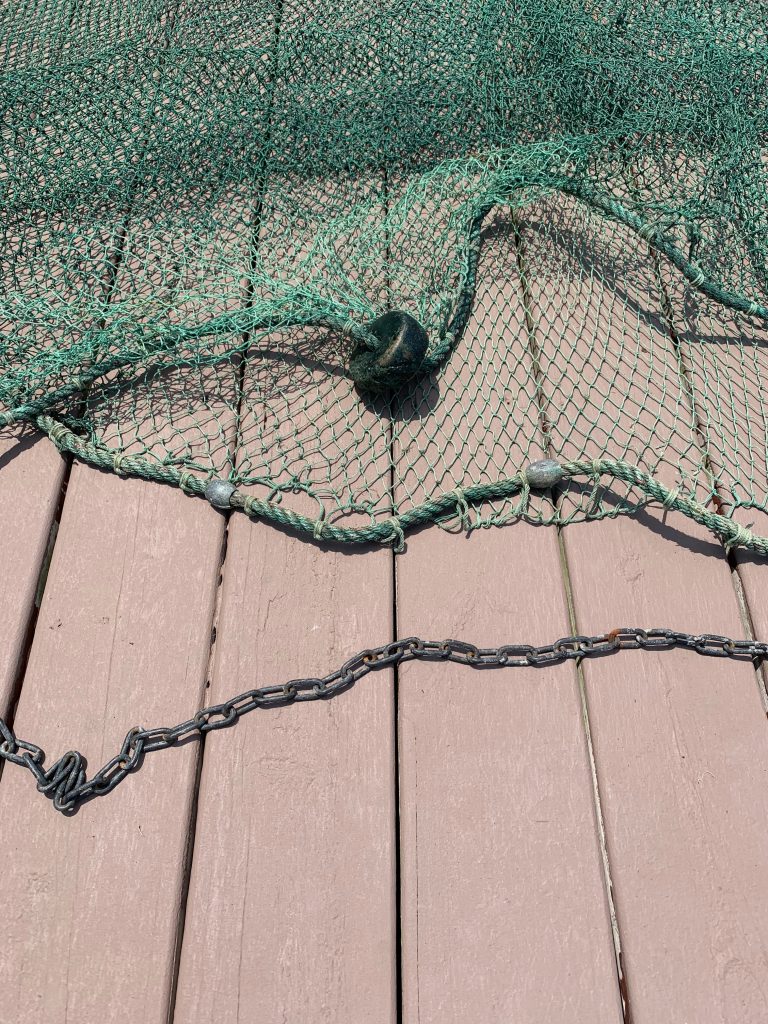 At the start of every season, make sure you check you net for any tears that need to be fixed.

For proper net tow rope selection, Ishee recommends, “The theory is that for every foot of water, you need 5-7 foot of tow rope. So, if it’s 10 feet deep, you will need 50 to 70 feet of rope. You can attach the tow ropes to side cleats on the boat which will help you spread the net better or you can attach to the back of the boat. It’s just a matter of preference.”

Choosing Where to Pull Your Shrimp Net

There are places in the Mobile Bay area that are closed to shrimping at all times. It is crucial for recreational shrimpers to know where they can and can’t trawl for shrimp.

“South of Dauphin Island stays open all year. When you purchase your license, they have a handout that shows permanently closed areas and where everywhere else is open,” Ishee said.  “Choosing where to pull is just a matter of preference. Usually shallower water will get you more fish, and shell bottom will have more fish, too. You have to be careful on shell bottom because you can pick up shells in the net and it could get too heavy.” 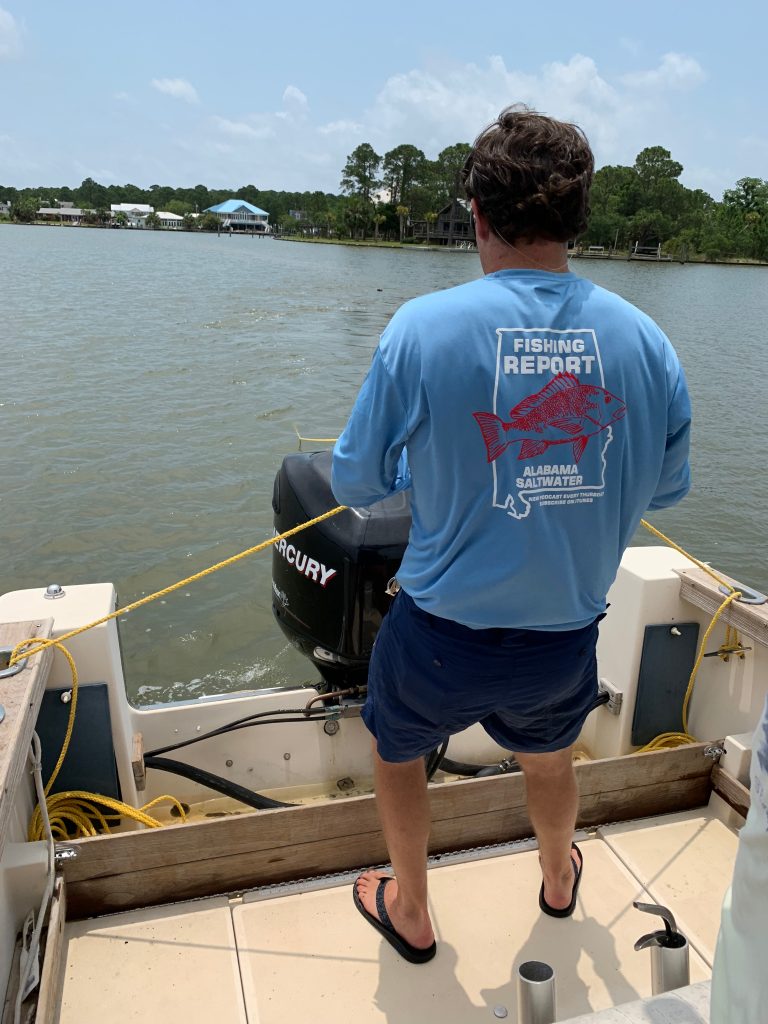 All you need is manpower when you are pulling a shrimp trawl for bait.

“Deeper holes and deeper water seem to have more shrimp during the summer time, so if you can shrimp deeper areas, gullies or channels, that seems to do better. I usually shrimp 12 to 20 feet deep, and I go in the evening into the night,” Ishee added.

“Try different areas and different water depths. Just because you caught them there yesterday doesn’t mean you will catch them there today. After doing it a few times or years, you will start to have certain areas that produce and consistently have shrimp. Obviously, look for other boats and big boats. If there are big boats dragging, the shrimp are there,” Ishee advises.

Actually putting a recreational shrimp trawl net out from a boat takes some organization and procedure to keep everything in place and going right. It helps to have some experience with a veteran shrimper aboard on the first few trips.

Ishee says, “One of the most important things to make sure of when you set the net out – don’t flip a door, and make sure your net is busting open. As you pull forward and are busting the doors open and letting out the rope, you need to keep a good tension on the doors as you let out the rope. Be careful to not get caught in the rope, and when you do let go of the last bit of rope, you need to make sure you’re not going too fast because the initial jerk can sometimes lodge the doors into the mud.” 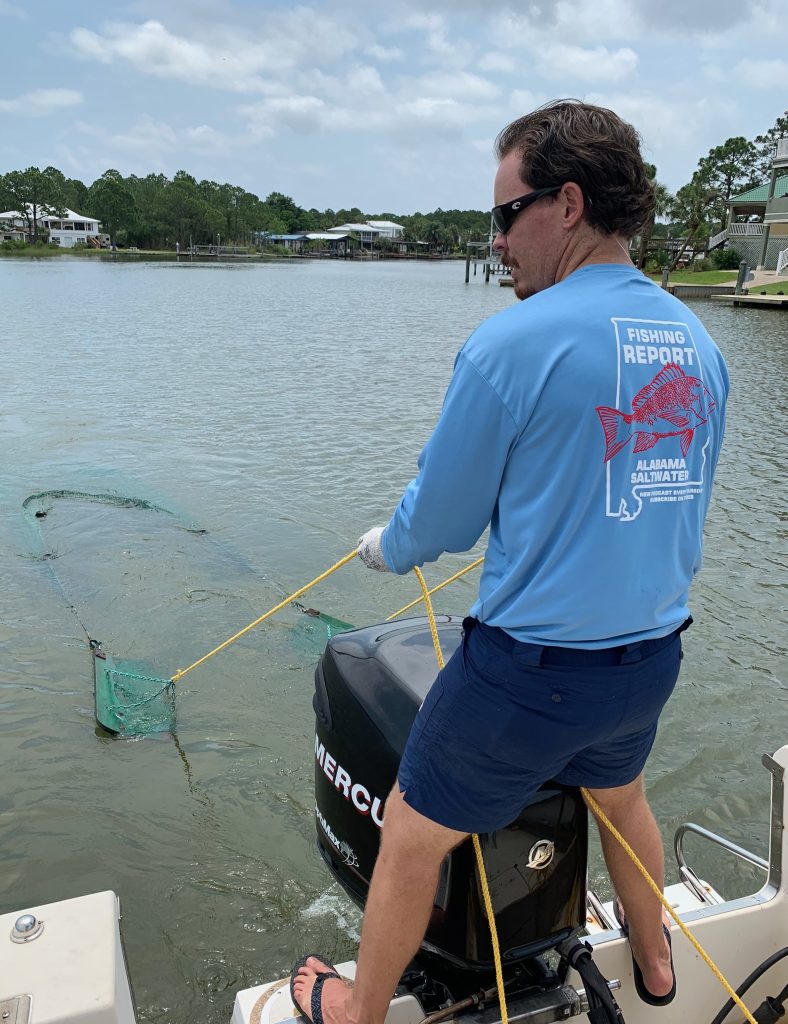 Pay careful attention when you are putting out your shrimp net. Make sure the tow ropes are not wrapped around you.

“We usually tow at 2.2 to 2.3 knots. You don’t want to pull too fast because you can pick the net up off the bottom, and if you create a pressure bulge in front of the net, the shrimp can feel this and get out of the way. Obviously you don’t want to pull too slowly because the shrimp will outrun the net, and you’re not covering as much ground and maximizing your time,” Ishee added.  “Typically we will pull for 30 minutes at first, and then if we are catching shrimp, we will pull for an hour.”

Ishee said that a special consideration for shrimpers catching live shrimp for bait is to limit the time that they pull.

“When live-bait shrimping, typically you only want to pull for 5-8 minutes so you don’t kill your bait,” Ishee said.  “A good pull for thirty minutes will usually produce 10-15 pounds of shrimp. If you catch more than 20 pounds on a drag, you need to drag for an hour and get ready to fill the boxes.”

Once shrimping season is over, the gear needs to be carefully inspected and then very carefully stored. Nets left out in the weather or just rolled up and tossed into a closet won’t be in good shape for the next year’s shrimping season.

Get a nice box to store your shrimp net during the off season. That box can double as your sorting box.

“I hang my net up and let it dry once I am through for the season, and I store it in a lug or plastic bin, and I put the net in first and cover the net with the doors on top with the rope on top of the doors.  This helps keep rodents out and any moisture. Be careful though because rats and mice will eat the net and put holes in it. This year, I had to replace my net because rats ate it up,” Ishee recommended.

“I tend to get my net re-dipped every three years or so and any holes patched- dipping costs around $50. You can purchase shrimping nets from Sprinkles Net Shop in Bayou La Batre and Brunson’s Net Supply across the bay. Nets run from $300 to $400,” Ishee said.

Shrimping is a Simple Joy

Other than the great food and great live bait which can come from a trip spent shrimping, young people in the shrimping crew learning about the coastal world and the wonderful creatures that live here is probably the most rewarding part of recreational shrimping.

“I love to take my girls shrimping. It shows them all the different sea life we have, and it lets them get their hands dirty doing it. To me, it teaches them how to supply their own food and that not everything needs to be bought in a store. It’s relaxing and other than picking the net up, it’s just slow boat riding and enjoying being outside,” Ishee concluded.

The rules change from season to season and from state to state. It is the fisherman’s responsibility to know the laws and regulations in effect at any given time. In Alabama, call 251-861-2882 or 251-968-7576 or Check the ADCNR website for specific information. Please check current regulations before shrimping.