Fishing artificial reefs for red snapper off the Alabama Gulf Coast isn’t always a slam dunk.  It is a challenge to locate the reef or structure and position and hold the boat steady over the target area in whatever water and weather conditions are thrown at you.

Bottom fishing for red snapper is fun for the anglers who book trips on the Escape out of Dauphin Island, and, as captain, it’s my business to know where the snapper are to be found and to be able to put my anglers on the specific location where they can catch fish.

Knowing where the fish should be takes a long time to learn. Just because a particular spot in the Gulf has a reef or good natural bottom doesn’t guarantee that red snapper will be there. Some places are just better, day in and day out, than other places and fishing artificial reefs is always in the mix.

But equally important, or maybe more important, is the ability of a boat handler to keep a boat in proper position so that wind, wave, and current don’t move the boat away from the fish holding structure.

I’ve been running the Escape since 2005 and that equates to many reef fishing trips.  During that time I’ve seen a lot of different wind and tide conditions out in the Gulf. I’ve also had as many as 40 anglers bottom fishing at once. I was taught how to deal with these conditions and hold a good position on a reef by my dad, Captain Mike Thierry. Once you’ve learned the basic principles, including the way the numbers move on a GPS and other key elements, the only way to get good at holding a boat in position is through practice.

So knowing how and why to position a boat, whether it’s a boat like the Escape or a small private fishing boat, while fishing artificial reefs or any other structure or bottom environment is crucial for success in red snapper fishing. 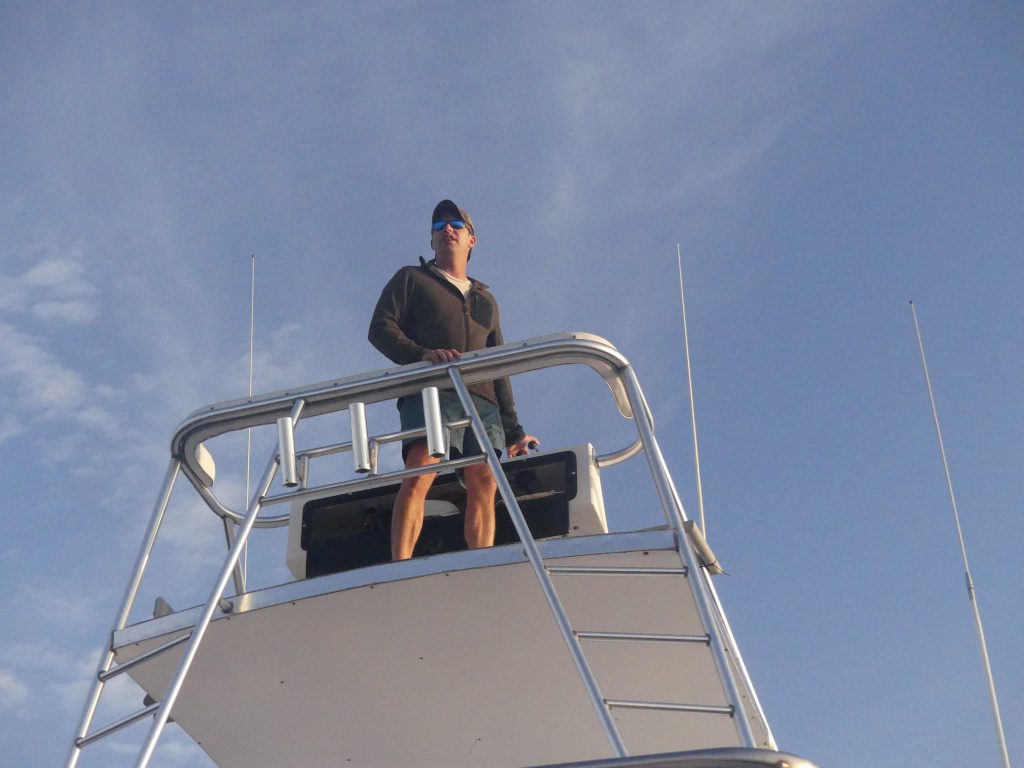 Captain Skipper Thierry keeps watch over how his anglers are doing, where his boat is positioned and keeps an eye out for better opportunities

There are many printed and online guides to Alabama’s coastal artificial reef system.  Alabama anglers and the state of Alabama have done a better and more productive job of placing bottom structure of all kinds, including bridge rubble, barges, old military tanks, and even sunken ships which attract and hold red snapper.

However, these bottom features are not permanent. They can be moved by storm currents and storm surges, and some of the artificial reefs consisting of things like old car bodies will disintegrate over time. Successfully fishing artificial reefs is contingent on whether they are actually physically there.

So the first job for anglers who want to hold up on some good snapper reef bottom is to find it.

Modern GPS systems on any size boat will allow anglers to go out in the Gulf with confidence that they can find where the artificial reef is supposed to be, but there’s nothing like a good sonar fish finder to locate where the structure, and the fish, actually are.

Once I determine where I’m marking the most fish on the sonar, I use the GPS to stay in as close to that location as I can.

And “close” is the important word here. It does an angler no good to be fishing from a boat that is almost on the fish-holding reef structure. The angler and the bait being presented must be right on the mark.

Holding stationary over a reef is of greatest importance to catch reef fish.  Fifty yards away from the reef may as well be a mile away! 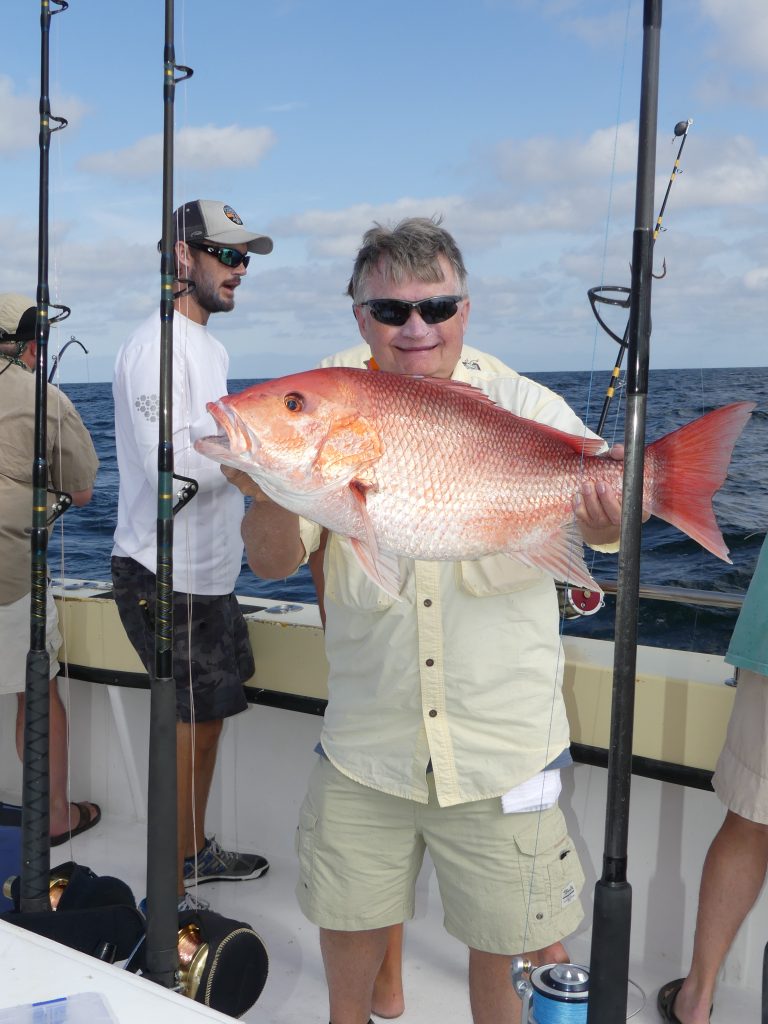 And Then You Have to Stay in Position

Holding a boat in position on the Gulf of Mexico is not much like parking a car. That car once it’s parked and locked is not going anywhere.

But a boat which is subject to wind and wave action can move in a number of ways, and once the boat moves from directly above the reef, the catching will stop and your anglers will be looking to you for answers.

In my opinion, the worst conditions for trying to keep a boat in position over a reef for good fishing happens when the wind and current are running 90 degrees from each other. Say a west current is running so that you have to point the boat west, but then a south wind with waves is present. This can really cause the boat to rock and make for challenging bottom fishing.

Trying to keep a boat of any size in position is probably the real test of a captain’s skill.  If a boat load of anglers who have paid to catch red snapper find that their lines are continually tangled and their bait is continually pulled off the reef from a boat which is not held in position, those anglers will probably start complaining and complaining loudly. 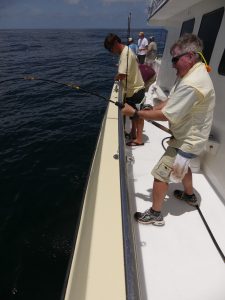 If the boat is held right, the fish will respond and big snapper will start coming over the rail.

The captain must determine what the wind is doing and what the current is doing. Then the captain has to determine which of the two factors is the strongest and which is most likely to affect the boat being able to hold position correctly. Determining exactly where and how much the boat is being moved takes time and attention.

It doesn’t matter whether you’re running a small outboard boat or a large multi-engine boat, the principle remains the same.  For best results in holding position, determine the direction the wind and currents are pushing you, then point the bow into the wind or current.  Make small adjustments on the engine or engines to keep in position. Captains trying to hold a boat in position over a reef need to keep adjustments small and only enough to counteract the wind and tide. Trying to keep a boat in position with strong engine thrusts doesn’t work well. Be gentle with the power and steering.

A good GPS unit can help greatly when it comes to holding a position. Most good GPS units will display a track which shows the boat’s position and where it has been. By reading this track and seeing where the boat is moving, you can do a much better job of keeping the boat in position over the reef.

Keeping a boat in position over a reef and trying to fish at the same time is very, very difficult and It always works best to have a driver whose only job is to keep the boat in position for the other folks on board. Holding a boat in the best position for bottom fishing is a challenge, but here is a tip. Before you head out for a day of bottom fishing, take your craft into some open water and practice. First work on holding your boat next to a piece of structure, like a buoy or a piling. Notice how the numbers on your GPS change as the wind and current push you off your mark. Once this is easy for you, mark a spot on your GPS and practice holding as close to those numbers as you can. Proper boat positioning for bottom fishing red snapper and other reef fish is just like riding a bike, once you get the hang of it, it only takes a little regular practice to keep both wheels turning smoothly.

According to Captain James Bertrand of Bluewater Charters in Orange Beach accurate productive holding of position is not just a consideration for big boats when fishing artificial reefs.

Bertrand fishes for red snapper over reefs quite often, and he uses some high-tech tools that are available for smaller boats.

“We operate multiple boats that are equipped with trolling motors from various manufacturers including Minn-kota and Motor-Guide.  Both of these manufacturers produce a quality product that gets the job done each and every time for the charter operation,” Bertrand said. “We utilize a chart to navigate to both public and private reefs/wrecks.

Once we have arrived at the waypoint we intend to target, we use sonar to scan the water column for the presence of fish. It is very important to have a high quality heading sensor/GPS antenna. This device provides extremely accurate vessel heading and potion data at any speed for your chart.  Without it, your chart will rotate/spin when moving over a reef at a very slow speed.”

“Modern trolling motors equipped with GPS technology also known as ‘I-Pilot’ are very effective at holding boat position over a reef or wreck.  These I-pilots are very powerful and are able to stand up to considerable amounts of current and wind offshore. They are a real game changer as they increase the effective amount of fishing time for my charter clients.  The I-pilot is controlled with a hand-held remote which allows the captain to lock in on a position and then make incremental adjustments as needed,”  Bertrand concluded.