Red snapper fishing requires some proper rigging and some correct technique in order for anglers to fully enjoy this wonderful fish and this amazing fishery we have on the northern Gulf Coast.

Although the artificial reef is something over a hundred feet below us, the lively pinfish I had put on my circle hook never made it down that hundred or so feet. My line came tight and my rod bent way over when the bait had gone down only forty feet. And whatever had taken my bait did not want to come up to be seen on the surface.

My reel’s drag complained, and my rod bent even farther over, and I had to apply pressure with my soon to be blistered thumb to slow the hooked fish down and keep it up out of the structure on the bottom. This was not easy.

After a few minutes of silent physical argument, I began to work the stubborn fish upward.  A small dash of color appeared in the clear Gulf water far below me, and then as I brought the fish farther upward, the color, a deep, brilliant red began to become obvious.

Suddenly this strong, powerful fish was at the surface ready to be brought aboard. The most amazing thing of this little struggle, this twelve-pound red snapper was not the biggest of the day.

Captain Yano Serra has fished the Gulf Coast for many years and he is a master at putting his clients on big red snapper.  He offered to share some of his experience with us.

We asked Serra how an angler who wants to find red snapper on his own can go about this. 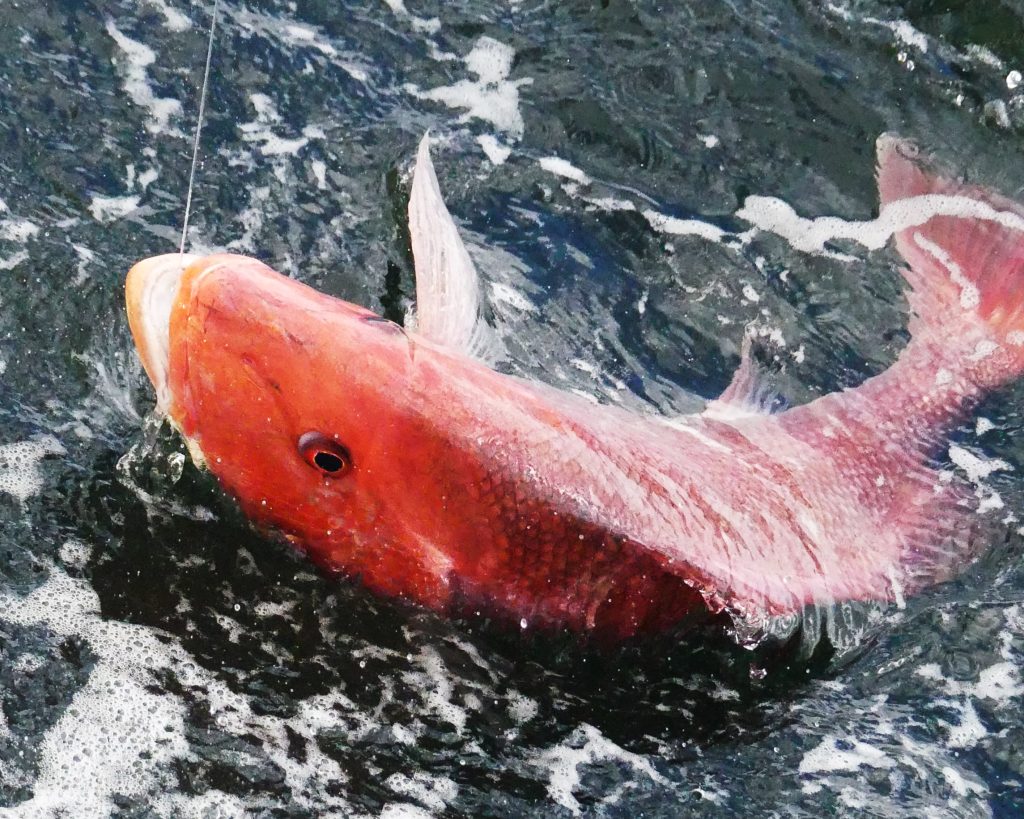 A big red snapper hooked high in the water column will fight hard all the way.

Serra laughed and said, “Just look for the charter boats!”

“Go online and look up Alabama State Public Fishing Reefs. There are hundreds of reefs offshore that Alabama has put down. It will take a little exploring and looking. Some of the reefs will be depleted of snapper, but when you find a reef that holds good fish, mark it on your sonar machine,” Serra said. “Remember, the reefs don’t change but the fish do. The snapper will migrate from cooler water to warmer water, and storms will push fish off one reef and they’ll move to another one.”

“There’s no real difference between artificial reef and natural bottom except that the natural bottom is farther offshore- say 40 to 50 miles. The artificial sites start within six miles. There are old army tanks and pyramids placed by the state from 8 to 60 miles out,” he added.

Red snapper are powerful fish and the big ones will stress any angler and gear as they try to make their way back to the structure below where they can chafe the line and break off the angler.

“I like a Carolina rig. I use 60-pound braid main line mostly, and then I’ll have a strong but small swivel, and the weight I use depends on the current. I usually get by with a 3 oz to 8 oz weight. If there’s no current, I don’t use any weight,” Serra said. 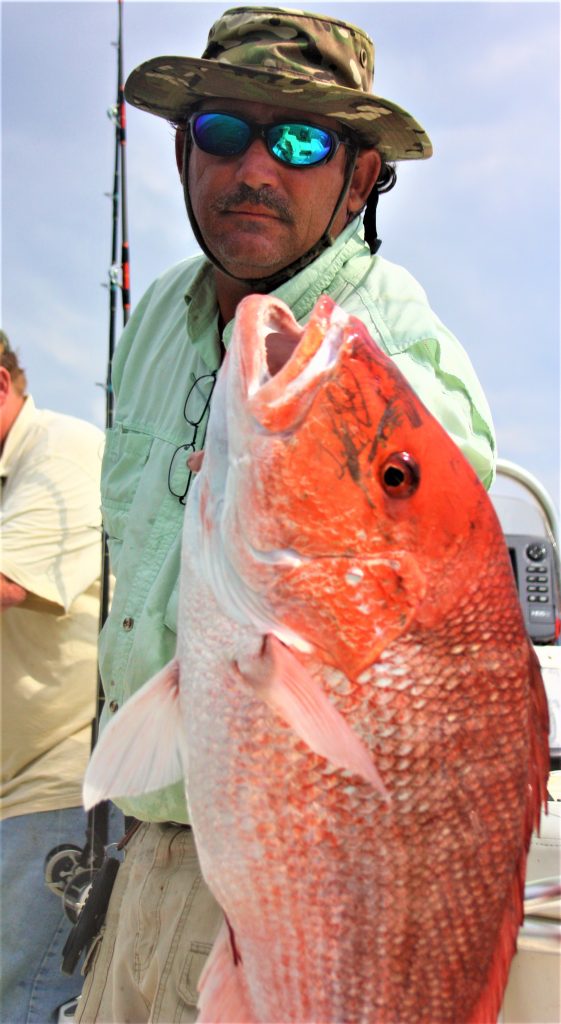 An aggressive red snapper could not resist a live bait sent down by Captain Yano.

“If I’m finesse fishing suspended snapper, I’ll use a spinning rig of at least a 6000 size with five or six feet of leader.  I don’t want the fish to see my braid main line. If I’m using conventional gear, I’ll go with 80-pound main line which is usually mono with a 100-to-150-pound leader,” Serra said.  “I’ve been broken off too many times to go with lighter tackle. A 10- or 15-pound red snapper will pull you into the reef below, and this heavy leader helps keep the fish on. I want a low-speed conventional reel so I can get a good strong pull on the bigger snappers to get them away from the reef. If you can get a big snapper up thirty feet or so from the reef, they blow out from pressure change and are easier to handle. I use a stout circle hook with a big gap. You want a big gap hook that will find its way past the big snapper’s jawbone. Smaller circle hooks won’t do this. Bigger hook- bigger snapper.”

Day in and day out, more big red snapper are caught on live bait than any other sort of bait.

“I like a fresh, fresh, fresh pogie. I like to cast a net for live pogies on the way out to the reefs,” Serra said. “I usually hook the live pogie through the back”.

When fishing pogies this way, the angler needs to let the fish eat it. Don’t jerk when you feel the first pressure. If you do, it will pull the hook.

”You’ll have to reel in and re-bait. I also like to use a pogie head. Hook the head through the mouth and out his gill plate. That’s the toughest part of the bait and it holds better and the snapper can’t see the hook. When I use hardtails for bait, I use only the heads.” 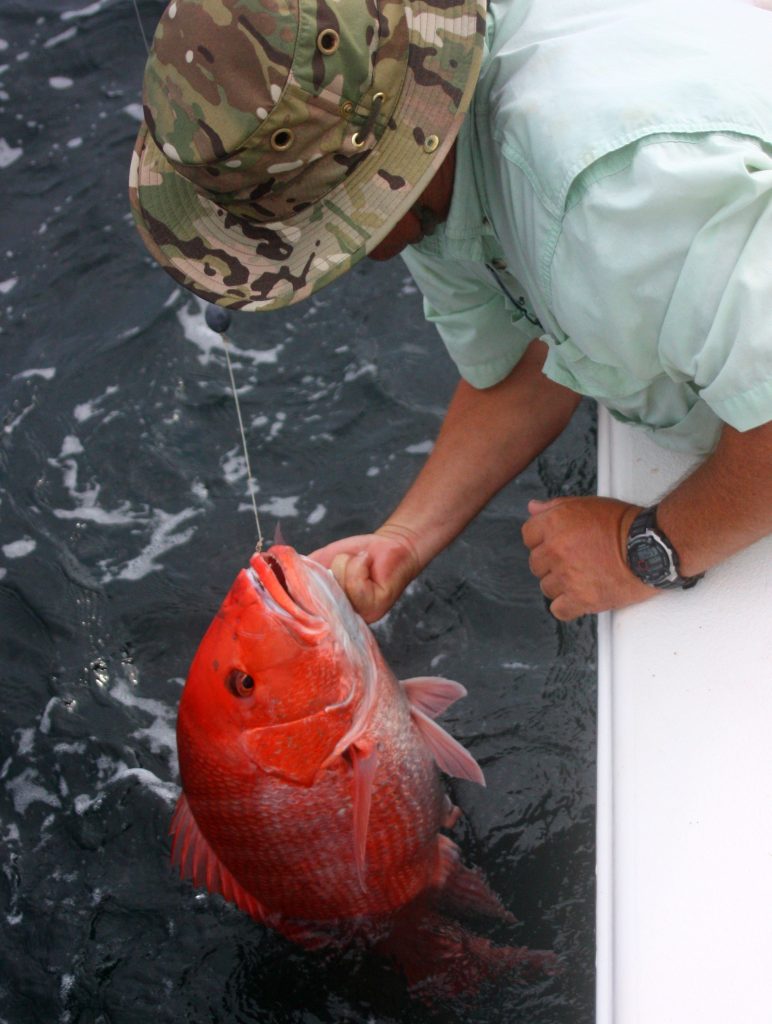 Whether live bait or artificials are used, red snapper are fighters, and delicious when taken home.

Heavy two-to-three-ounce jigs with soft plastic ripple tails can be very effective for red snapper. They seem to like chartreuse soft plastic bodies, but white also works well, just make sure that those jig hooks are very sharp. It can be hard to set a dull hook in a big snapper’s tough mouth.

Although it may seem an unusual way to catch snapper Yano fishes a fly rod for snapper at times.

“I use a black and white weighted clouser fly. I strip off forty or fifty feet of fly line, cast up current and let the fly sink. I just ‘hop’ the fly as it sinks and I try to keep it at the depth the snapper are holding at. When a five or six pound snapper takes a fly, it feels like a sow snapper has shown up. I have gotten busted knuckles from the reel handle spinning so fast when a snapper peeled off the fly line.”

For those times when live red snapper bait seems to be eaten up by smaller bait-stealers before the big fish can get to the hook, using artificial bait can be very effective

On a recent trip to the near-shore reefs off Panama City Beach, Florida the folks on the boat with me were getting lots of strikes but only occasionally would a keeper snapper come in.

I reeled up my live bait rig which was stripped clean once more by smaller reef fish, and cut off the live bait rig.  I tied on a three-foot long section of 30-pound mono for a leader and then I attached a two-ounce jig head. When I threaded on a FishBites four-inch Butt Kicker Paddle Tail that had proven very effective on big bull redfish the day before and dropped it to the reef structure, things changed. I got an immediate strike and hook up with a very good snapper. Another drop brought a strong strike and a very nice gag grouper. 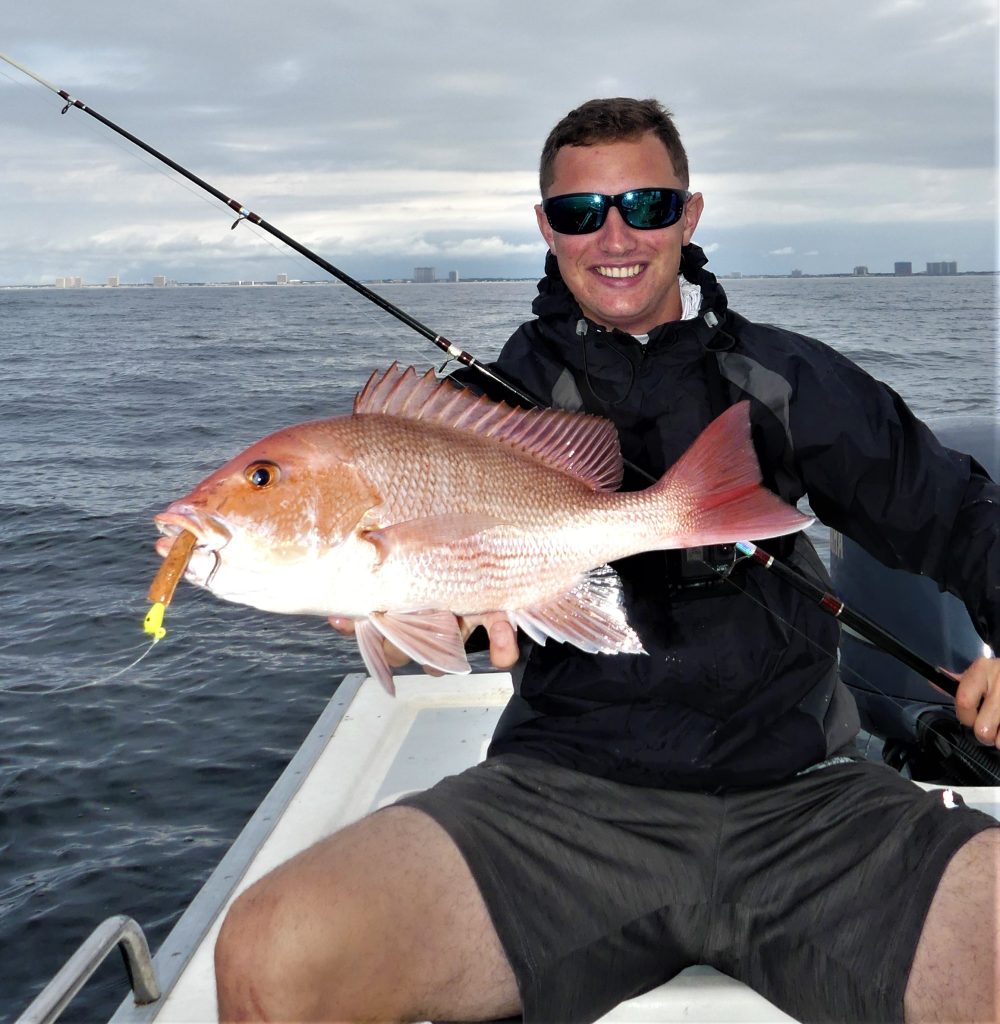 FishBites scented grubs can be very effective for red snapper.

When I shared Fishbites Butt Kickers with the other anglers, the bait stealing stopped and the tough, long-lasting FishBites grub bodies were too much for the big snapper to resist.

FishBites products are scented, have good action in the water, and they are made much tougher than other artificial scented baits.

When asked his favorite red snapper fishing technique, Yano answers with no hesitation.

“I love free-lining for snapper. I use the circle hook and no weight. I just cast up current, put the rod in a rod holder and let the bait fall- I’ll use either live bait or a head. I let the fish hook itself and when the rod bends over, I hit ‘em.” Serra said. 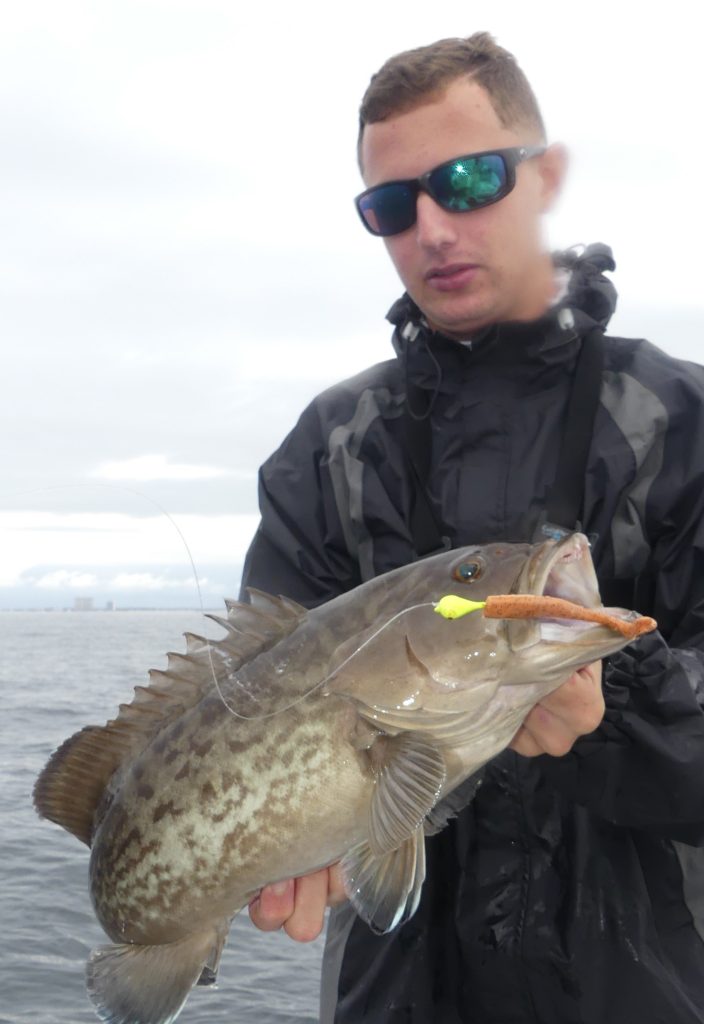 Even gag grouper will take on a scented FishBites jig and grub when it reaches the structure below.

“There can be a good bonus when snapper fishing this way Big king mackerel, ling, dolphin, and some really big snapper will come up to the free-lined bait higher and they’ll bite shallow,” Serra noted.  “I’ve caught some big fish at ten foot depths or even less. Often, you can see the fish and feed ‘em the bait. Chumming can work, but it can pull up the smaller snapper from deep water, and if you over chum, the snapper will fill up and stop biting. Chum lightly!”

Red snapper season opening and closing dates for both state and federal waters have not been announced as of yet. The seasons will most likely be very similar to last year’s start and end dates.

Remember the dividing line for state and federal waters for the Gulf Coast states is 9 miles. Inside of that an angler is in state water and under state regulations

Red snapper anglers must have:

Harvested red snapper must be reported on one Snapper Check Report per vessel before fish are landed in Alabama.

Reminder: Possession of red snapper in Alabama state waters while the Alabama season is closed is prohibited, no matter where the snapper were caught.