Hunters often overlook the small-game hunting season that continues after deer season and the enjoyment hunting small game can bring.

I could feel my grandson Zach’s heart beating excitedly as I helped him support the little youth-sized gun he was aiming. A 10-point buck or a big turkey gobbler didn’t cause this six-year-old’s excitement. We were enjoying squirrel hunting, and he was attempting to harvest his first game animal. It was a gray squirrel sticking tight to the side of an oak tree.

Fortunately, his aim with the single barrel .410 shotgun was true and down tumbled his first squirrel. Later, on the same hunt, his friend Tripp also harvested his first squirrel. The hug and “thanks, Papa” I received from Zach was a worthy reward. The fact that the squirrels were harvested over my Feist squirrel dogs just made the hunt more enjoyable.

Before rain canceled the hunt, these youngsters had each taken two squirrels. The boys took turns shooting at the treed squirrels. No African safari would generate more satisfaction than they enjoyed that day.

Most deer hunters have quite a letdown when deer season ends. They often overlook the small-game hunting season that continues after deer season and the enjoyment hunting small game can bring.

Rabbit and squirrel are two of the small-game species that are plentiful and fun to hunt. Hunters are fortunate to have squirrels to hunt, thanks to changes in the hunting season by the Division of Wildlife and Freshwater Fisheries.

I grew up small-game hunting and learned my hunting skills while pursuing the gray squirrels found near my home in Coffee County, AL. As I hunted the limited forest habitat in our farming community, it was either hunt small game or nothing, as there were no deer or turkey in our area.

I remember quite vividly my first squirrel hunting experience. On Friday evening, after he arrived home from work, my father asked me if I would like to go squirrel hunting the next morning. I hardly slept a wink that night and was up without any prompting when the coffee pot began percolating. Dad and I traveled a short distance to a neighbor’s property and took a seat next to a massive oak tree. My father explained that this particular tree was not only a food source but also served as a den tree for squirrels.

As daylight gradually illuminated the oak trees around us, a gray squirrel came down the tree trunk about 20 yards away, silhouetted, and stopped. Dad eased the single-shot, open-sighted .22 caliber rifle into my hands and said, “Go ahead and shoot the squirrel.” At precisely that moment, I started to shake and actually thought I might drop the rifle. I whispered, “I can’t hold it.” Dad smiled, took the rifle from me, and made a perfect head shot. We (Dad) harvested another squirrel that same morning.

As we walked home, Dad informed me that my “buck fever” was a natural reaction and part of the excitement. It’s one of the reasons we hunt. After we returned home, I learned to skin, clean, and prepare squirrels for cooking. I’ll always remember that hunt as a cherished memory of a special time with my father.

Since that first squirrel hunt, I’ve hunted squirrels with a passion. Unfortunately, many youngsters and beginning hunters lose interest and stop hunting. Don’t get me wrong, I like to hunt a big buck. I just think squirrel hunting is a great way to introduce new hunters into the hunting circle.

The best mast-producing trees in Alabama are oak, hickory, walnut, wild pecan, and beech. Pecan orchards also provide food for squirrels, and if near other woods, can be exceptional places to hunt. Squirrels also feed heavily on emerging buds. Poplar, sweet gum, and other trees of this type become favorite food sources. A hunter can also find broken acorn hulls and chewed nutshells where squirrels feed. I like to hunt near old hollow beech trees surrounded by oaks and hickories. These areas almost never fail to produce squirrels. 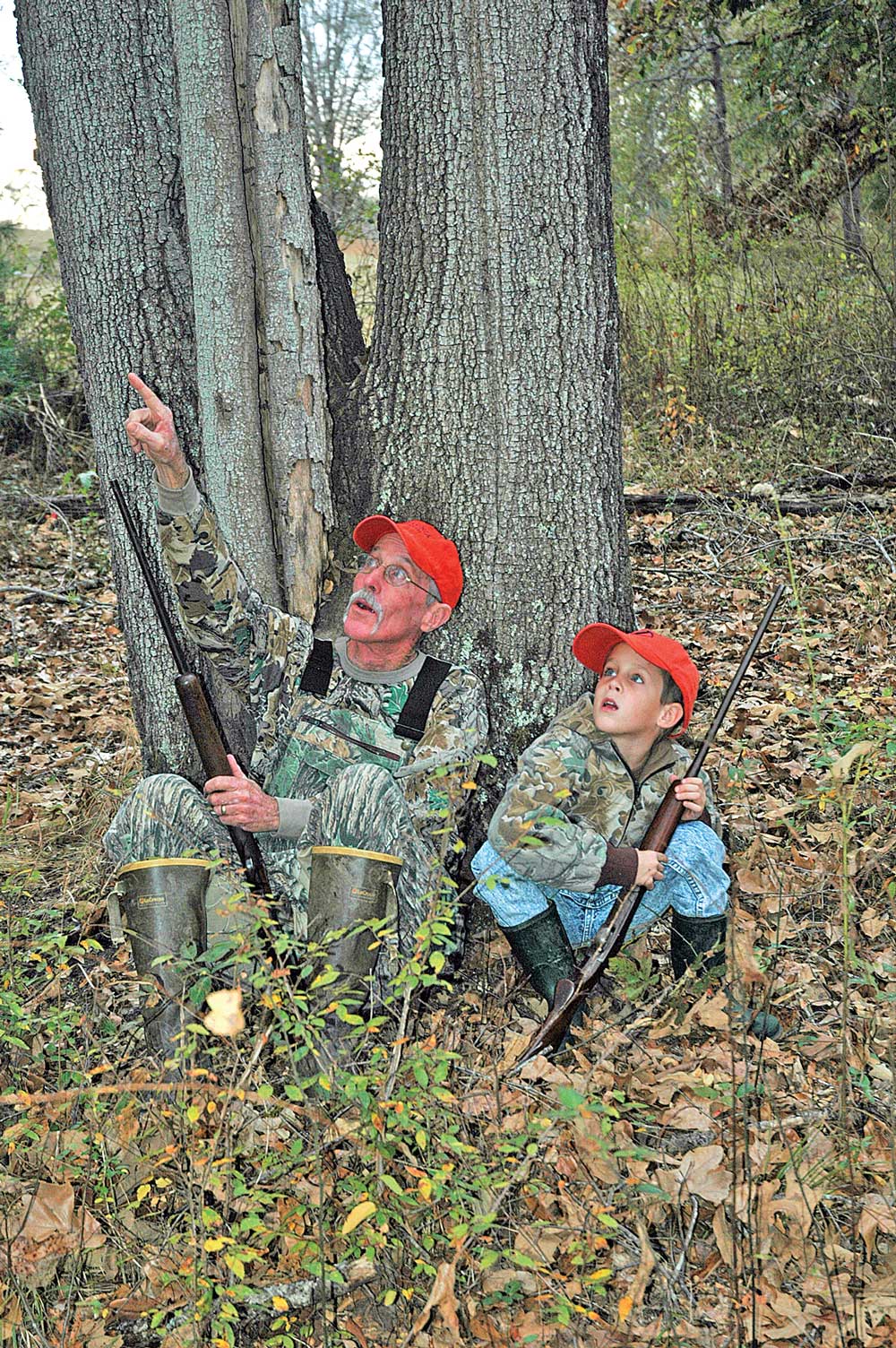 Charlie Lane points out a squirrel to his son Jake while still-hunting. Photo by Tim Cosby

Spot and Stalk or Still Hunting

Squirrel hunters can use several methods to hunt their quarry. Spot and stalk/still hunting are the favorite techniques of squirrel hunting for many hunters. Spot and stalk hunting for squirrels is simply moving slowly and quietly through the woods looking for the movement of a squirrel or spotting it as it hides on a limb or in the crotch of a tree. On cold days, squirrels often sun themselves to warm up. A sharp eye will locate them as they lay motionless on the big limbs of a tree. Frequently, a squirrel will bark or give an alarm cry and alert a hunter to the squirrel’s location.

Once a squirrel is located, the stalk begins. The hunter gets in a position to take a shot. I prefer to be no more than 35 to 40 yards from a squirrel before shooting. Still-hunting requires a hunter to take a place of concealment near den trees or feed trees and wait for a squirrel to venture out and offer a shot. Concealment and location are the main ingredients for a successful still-hunt. Of course, many hunters combine the two methods and move between likely places to ambush “bushytails.” Hunters spend long periods of time still-hunting each place before moving to the next area.

“Squirrels are often shot at long distances, and many hunters use super accurate .22 caliber rimfire rifles topped with a quality scope.”

Spot and stalk hunting can be difficult due to leafless trees in the woods. Squirrels are often shot at long distances, and many hunters use super accurate .22 caliber rimfire rifles topped with a quality scope. Such equipment assists in providing accurate bullet placement. It’s possible to use a shotgun, but the open woods make a close stalk extremely difficult. Spot and stalk and still-hunting can be combined to make for a more successful hunt, or to keep from having to look at the same scenery all day.

When the weather was going to be cold and the wind blowing, several of the local boys would get together and squirrel hunt by shaking vines growing up thick, tall trees. The technique involves surrounding the tree and giving a shake to the vines to see if a squirrel could be hiding in the tree. Normally, it takes more than one hunter to be productive since it’s hard to shake a vine, see the squirrel, and shoot it at the same time. Of course, that method requires the right habitat and weather to be worth the effort.

My favorite method of squirrel hunting is to use dogs to locate the bushytail as it hides in a tree. I prefer this method of squirrel hunting for several reasons. The number one reason is the relationship with squirrel dogs. A good squirrel dog is a joy to own and to hunt behind. A good one works hard to find a squirrel for his hunting buddy. A great social interaction exists between the hunters and youngsters in a group on a dog squirrel hunt. That’s made possible because dogs locate the squirrels for the group. In fact, kids don’t even need to carry a loaded firearm. Only after a squirrel has been treed and located is it necessary for young hunters to have a loaded gun, and then only under close adult supervision.

Kids love this part a lot. After a squirrel is seen, a young (or old) hunter can then take a shot. If the squirrel isn’t quickly located, a vine is pulled or a nearby small tree is shaken. That often results in a gray blur skittering through the treetops, headed for a den hole or other place of refuge. A scampering squirrel in the treetops is a tough target to hit, so I always like a hunter armed with a shotgun in my hunting group. 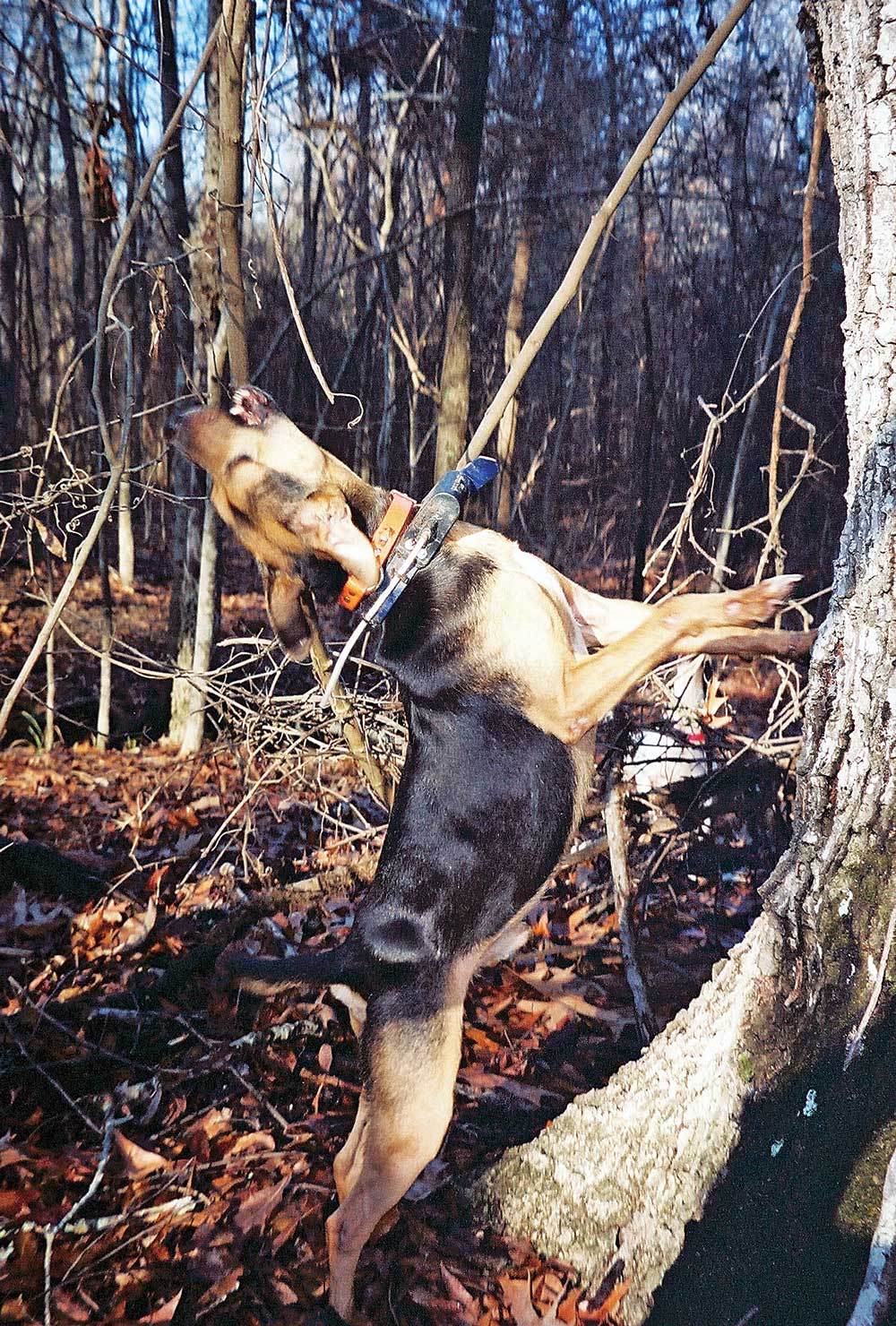 Drifter, one of the author’s squirrel dogs, put his heart and soul into the act of treeing a bushytail. Photo by Tim Cosby

It really isn’t necessary to buy an expensive gun to hunt squirrels. Single-shot .22 caliber rimfire rifles and single-barrel shotguns work just fine for an occasional squirrel hunt. It is, however, possible to spend a large sum of money (ask my wife) on a super accurate .22 rimfire rifle, complete with an expensive scope or a full choke, semi-automatic shotgun. Squirrels are tough customers and require the use of fairly heavy loads to ensure a quick, kill. I use high-velocity .22 long rifle ammunition in a rifle and number five or six shot high-brass shells in a shotgun.

Squirrel season occurs immediately after the close of deer season, and deer signs are still evident. It provides an opportunity for hunters to scout and learn more about their hunting property. Hunters often discover new deer trails, scrapes, and rubs from the previous season. In fact, it’s not unusual for hunters traveling with me and following my squirrel dogs to discover deer signs they never knew were on their property. As one landowner told me, “It’s been 20 years since I’ve been on this corner of my property and just look at the rubs and scrapes.” Another bonus for hunting squirrels is that any disturbance and human scent will be long gone by the next deer season.

You should consider going after bushytails. Invite some friends to come along. Whatever method of hunting you may choose, I think you will enjoy it.

For more information about Feist squirrel dogs, contact Tim Cosby at 334-562-3124 or by mail at 11543 Hobbie Road, Ramer, AL, 36069. Cosby is a member of the American Treeing Feist Association. Visit www.americantreeingfeist.com.