Speckled Trout Fishing: My introduction to the Slick Lure

“Man, you have to find out what these things are! They are eating them up and I can’t get bit on my favorite lure! About an hour later I get a call back from Jim. “They are called Slick Lures from a company called Pure Flats out of Gainesville.”

We had just finished up speckled trout fishing and said our goodbyes. Then I thought as my charter drove away from the landing, “It’s just too perfect of a day to call it quits.” The bite in Mobile’s Dog River had been awesome with over 30 nice speckled trout and a bull red landed, all coming off of mullet imitation lures, top waters, crank baits and jerk shads. Good but not atypical of a winter day in the area’s tidal rivers.

So off I went with plans to fish my way back down the river, eat lunch at a restaurant near the mouth and then fish my way back up. After a dozen or so casts without a bite, I started to lose my enthusiasm. Before giving up, though, I decided to try another shape and color. Opening the hatch to my tackle storage area, I noticed an untagged baggie of large soft plastics that my buddy “Fuji” Jim Ising had left on my boat from a previous trip. “Heck, I’ll try these things. They are not biting what I have been throwing so who knows?”

Rigging one up I made a cast- nothing, but on the second cast, a hard thump and hookup resulted in my landing a three pound or so sized trout. Same thing on my next three casts. “Well, I guess I have found them.” So I tried the MirrOlure that I had previously been using, ten casts and not a bite. “Huh? Let me try this thing that Jim left again.” 4 more casts netted three more speckled trout and I was on the phone to Jim. “Man, you have to find out what these things are! They are eating them up and I can’t get bit on my favorite lure!”

About an hour later I get a call back from Jim. “They are called Slick Lures from a company called Pure Flats out of Gainesville.”

As soon as I got home I found them on the web, ordered some and the rest has been history for me. They have been the most productive of that type lure that I have ever used in 40+ years of speckled trout fishing. Moreover, I have had talented anglers on the boat with me and have challenged them to out fish it with their favorite lure and have yet to find anything that out fishes it. As with anything good though, there is a catch. You can’t just tie it on, cast and expect to catch fish. The lure has to be used in the right situation and presented properly. Let’s go over when and how the lure should be used. 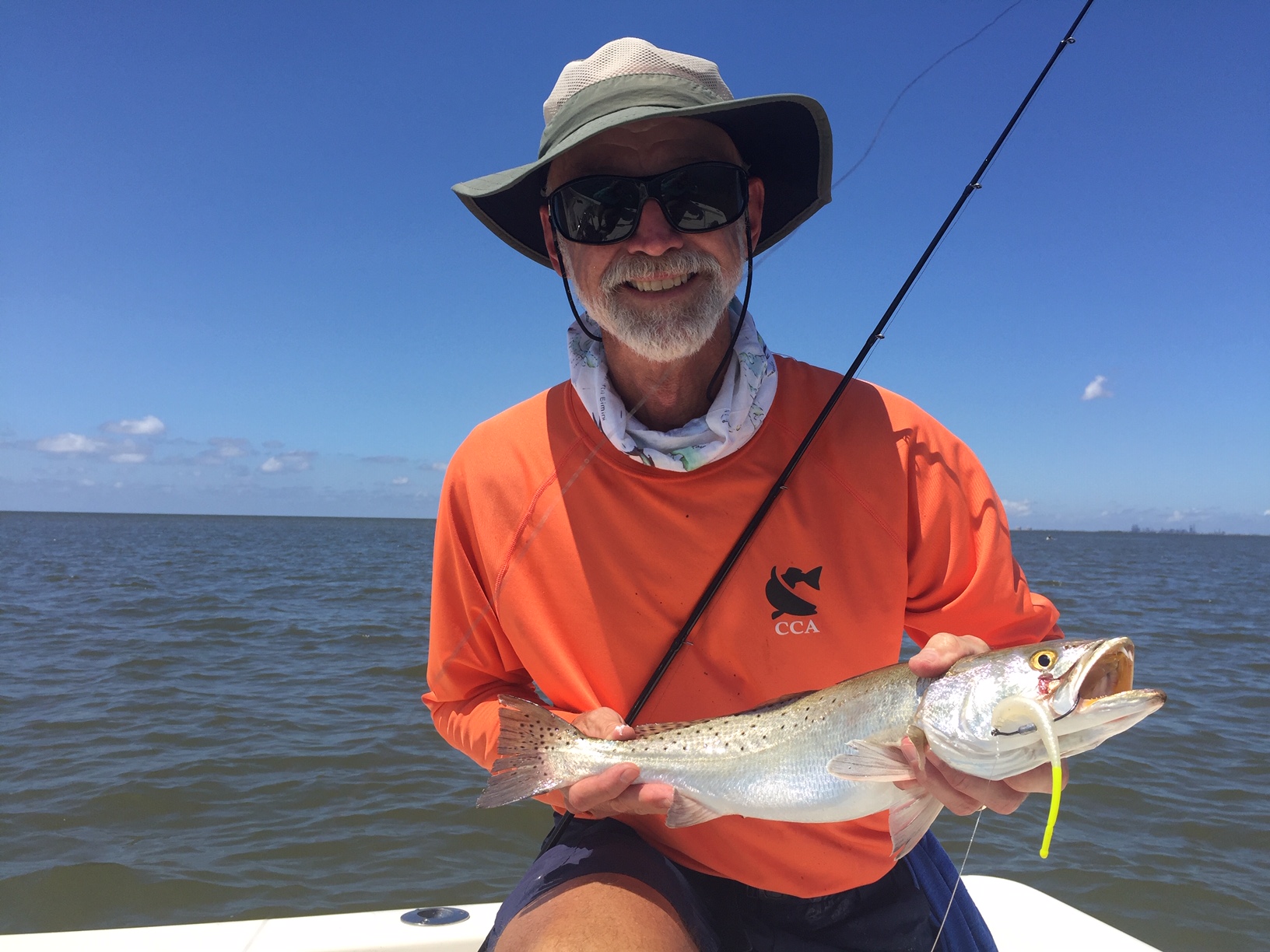 When Should I Use the Slick Lure?

In some tidal rivers, the speckled trout suspend sometimes, you can catch them in a little deeper water. Typically, I use the Slick Lure when speckled trout fishing in water depths from one to eight feet. It won’t work if you are jigging in a 20-foot water column. There, a lead headed soft plastic is going to work best. When you are at the six to eight-foot range, give the lure a two or three count before beginning your retrieve. We’ll touch on presentation techniques in a bit, but that will keep the lure in the strike zone for you.

Currently, Pure Flats offers the Slick Lure in 20 different colors from solid subtle and bright colors to two-tone combinations of colors. The spectrum offered will cover any level of clarity. Selecting the right color for the right shade of the water being fished is key and experimentation is the best way to determine what is going to work when speckled trout fishing. Generally, I have found the brighter colors work best in off-colored water and the more natural colors work best in clear water. Of course, as is with fishing there are times the fish don’t read the rule book and go 180 degrees from what I thought they would do. I usually have at least a couple of colors tied on when I boat to fish and a few different ones in my wade box when I am in the water.

Setting Up the Slick Lure

As part of my learning curve with the lure, I had to figure out what hook works best when speckled trout fishing. The slick lure comes with an un-weighted 4/0 Owner “Beast” hook. That is the hook shape you’ll want to use, but with the 1/8 oz. weight. The “Beast” is a wide gapped swimbait hook and the shape allows for the hook point to come all the way through the thick rubber body of the lure. This allows for more hookups while keeping the action of the lure intact.

Setting the lure up is also super important. You’ll want to make sure that the hook comes up through the slot in the belly and pokes through the back. Be sure it is centered in the back so the lure doesn’t spin and then take care to make sure the lure lays flats and is not “bowed up”.  I also like to “skin” the tip of the hook. This means that once the hook pokes through, I slide the point back into the lure ever so slightly- just enough that I can run my finger across the back without getting hitting the point. This keeps it in place and also makes the lure truly weedless.

The acid test for making sure it is set right, is to drop it in the water and jerk it a few times. It should go side to side and not spin, nor come up to the surface. You’ll also want to check it after a few casts and especially after catching a fish. The fish almost always knock the hook out of the lure, so you’ll want to reset it after each fish.

The type of line used with the lure is another aspect that is essential to success when speckled trout fishing with the Slick Lure. Because the lure is thick and the hook is somewhat buried in it, you’ll want to use a line with little or no stretch. This doesn’t help get more bites, but hooking fish with a lure body the size of the Slick Lure requires being able to move the hook when it is set-especially on long casts. I like fluorocarbon or braid when using the Slick Lure. As mentioned, mono will get just as many bites but will drive you crazy missing fish because of the amount of stretch.

When tying the lure, use a loop knot. There are a variety of loop knots that can be used and all will free the lure up for more action. 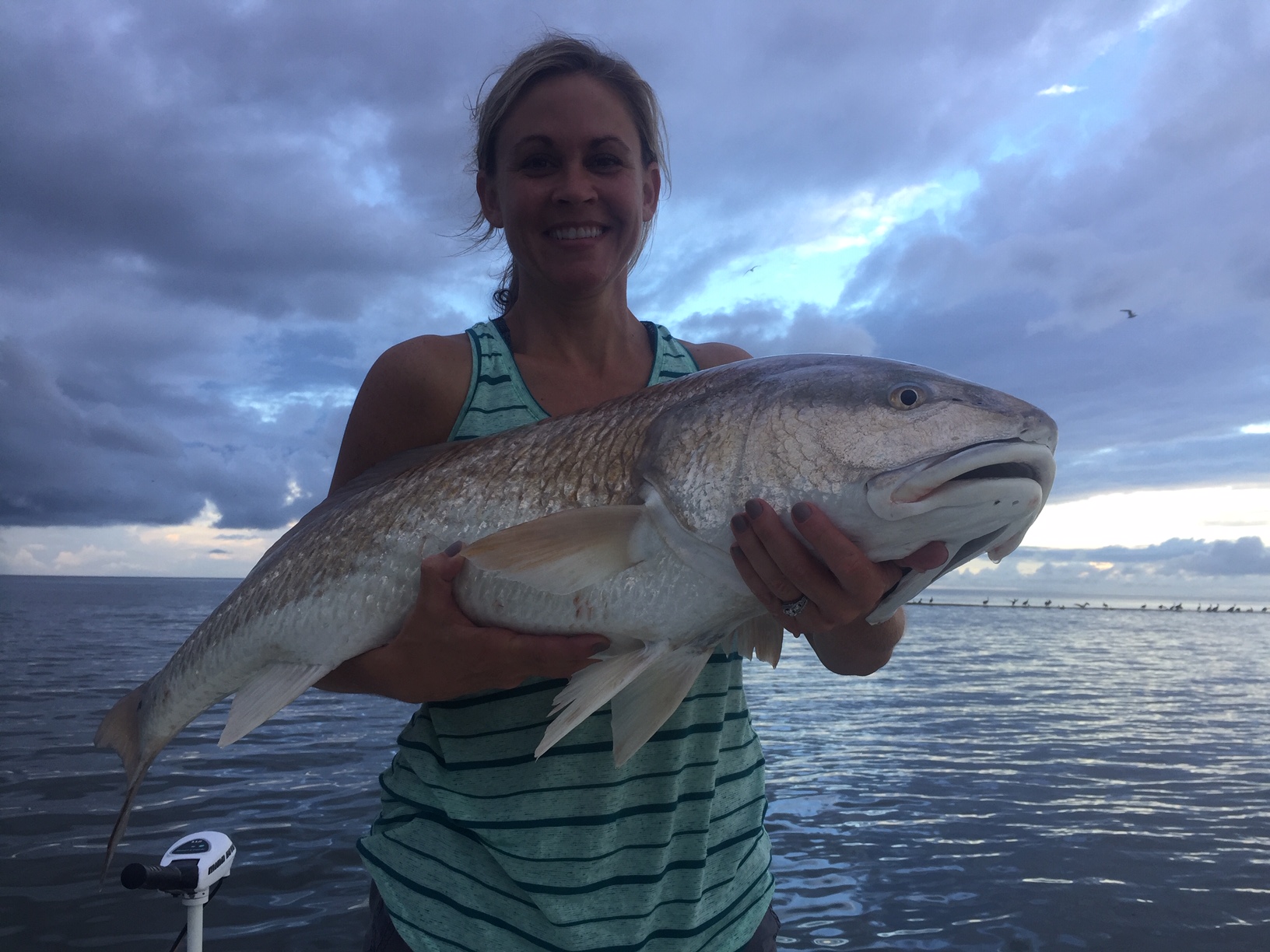 How to Fish Using the Slick Lure?

Everything in saltwater eats shrimp, especially when speckled trout fishing, so by just putting one on a hook, you’ll instantly catch fish- yea right! As with any bait, both natural and artificial, the presentation is the most important, yet most often overlooked factor. Applying that to presenting the Slick Lure, focusing on how the bait is offered is paramount once all of the above has been done. The Slick Lure imitates a finfish like mullet pogies, etc. A speckled trout eats a finfish by striking them first from the side just like a submarine attacks a ship. Then the specks immediately turn the finfish and swallow it head first. Because the specks will be feeding facing into the current, the best cast and retrieve direction will be 90 degrees relative to the direction of the current while you are in the searching mode. This sets the bait up easiest for the speckled trout to strike. Then you can pretty much cast in any direction once you have dialed in on the location of the fish.

I use a slow rolling retrieve and never stop reeling. By “rolling” I mean, just barely, almost imperceptibly, raising the rod tip as I am reeling. The “rolls” create a little slack in the line which even though I don’t stop reeling causes a slight pause in the lure.

Captain Richard Rutland and I have fished the Slick Lure in tournaments for a few years now. He uses a dramatically different presentation than mine. His is a pronounced “jerk-jerk- pause” where he completely stops reeling allowing the lure to stop and start slowly sinking before beginning his retrieve.

Very often, we stand shoulder-to-shoulder with these two noticeably different presentations going tit-for-tat catching fish. There have also been occasions where one has worked better than the other.

The moral of the story, and what both presentations have in common, is some sort of pause in the retrieve. The bite is similar to a jolt of electricity being sent up the line. It’s truly such a hard hit, you can see the other angler’s rod knock when they get bit. Even though the bite is hard, you’ll want to set the hook and probably harder than you’re used to. The hook needs to get pulled through or out of the body and into the fish, or they will just spit it out. If the lure comes back with the hook not pulled through, you’re not sticking them hard enough.

The Slick Lure is big fish bait for speckled trout fishing. By that, I mean it entices big fish to bite, but it doesn’t mean smaller fish won’t try to eat it. Oftentimes, I’ll get multiple bites without hookups only to finally catch a 15” speckled trout. That tells me I am around smaller fish which can’t get the lure in their mouths. As mentioned though, it doesn’t stop them from trying!

Please be aware that I am not sponsored by or affiliated with Pure Flats. I buy the lures just like everyone else. They are available online as well as at local tackle stores like McCoy Outdoors and Tackle This in Mobile, Al. I hope if you decide to give the Slick Lure a try, the above-mentioned tips help to have the success that I have had with it.