Catching large spotted sea trout takes both art and science, and even then it’s rarely easy. For the many anglers who avidly pursue the giant “gators” or “yellow-mouths”, there’s always new tricks to learn, new speckled trout lures to try, new spots to fish.

The northern Gulf Coast is a particularly productive area for big sea trout, largely due to the fertile waters resulting from nutrients carried to the coast by the big rivers here. This results in abundant shrimp and baitfish for the big trout to get fat on.

Still, as an old guide once told me, “there’s a whole lot of places where they ain’t”.

Biologists report that lunker saltwater speckled trout mostly eat baitfish rather than the shrimp preferred by the 12 to 15-inchers, so they’re usually found around schools of finger mullet, pogies, LY’s and other bait in the four to eight inch range.  The largest trout will even eat 12 to 14 inch mullet! 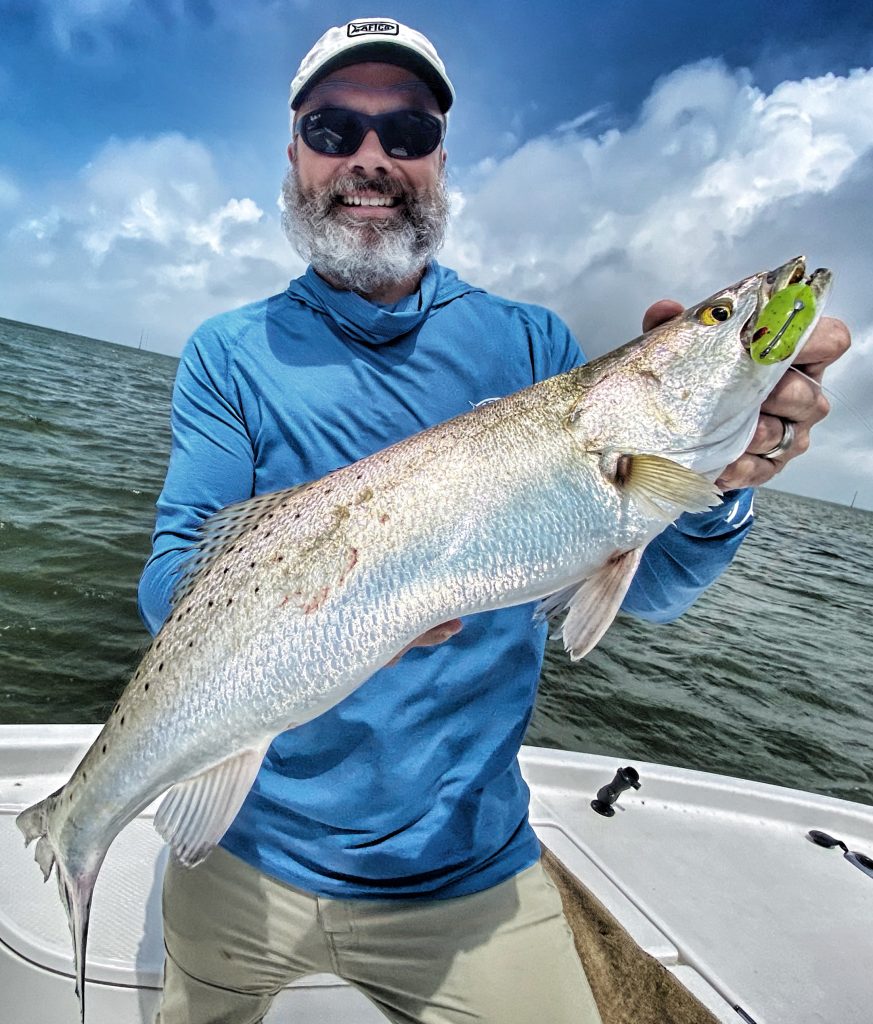 Massive spotted seatrout like this one are rare, but with the right lure in the right place at the right time, it’s possible to score. (Slick Lure)

So, keeping an eye out for large baitfish can be very helpful.

Jumping mullet—even mullet way too big for trout to eat—often reveal an area where huge trout will be prowling. This will often be in water just a foot or two deep, particularly at dawn and again just before dark. The jumbos also run the trough of the beach, just beyond the first bar and sometimes inside the bar, in the spring months.

When schooling baitfish are not abundant, the big trout seek out pigfish and pinfish on the grass flats. A big, nutritious mouthful seems to be what they’re after, so look for areas where these species abound and you’re likely to be in the big trout zone.  You can sometimes spot a pinfish flat by watching for the flash of silver-dollar-sized pins as they feed in water two to four feet deep. Pigfish tend to hang just off the edge of the shallowest flats as well as around docks, piers and other hard structure.

Trout spawn from April to September in the northern Gulf, with the activity most intense around new and full moons. They gather on the edge of deep channels or in sloughs along the beaches, particularly from the Florida and Alabama line westward, and spawn at night. If you’re targeting a giant female trout, hopefully for a photo and release, these fish will be among the easiest to find. Many experts wadefish the surf on days when seas allow, casting parallel to the beach as they go.

Large trout also prowl the mouths of creeks and sloughs like the many feeding into the Mississippi Sound, picking off bait that comes out of the backcountry on falling tides. The strongest bite on speckled trout lures is often on the three days on either side of a new or full moon. Remember that the big trout prowl into water barely a foot deep at times, making wade-fishing or a kayak the preferred way to get at them. 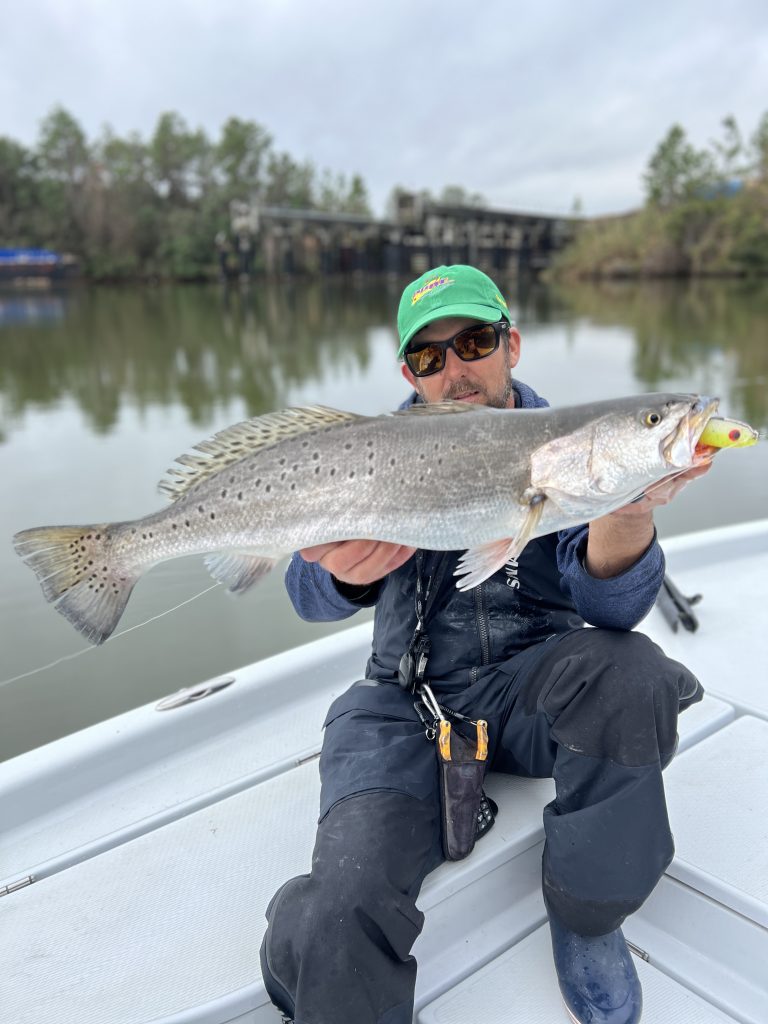 In cold weather large trout move into deep holes in rivers and ship channels where they can be caught on weighted lures fished near bottom. (Slick Lure)

Shorelines with old docks or other cover are another attraction in spring when water temperature is from 65 into the low 70’s.

Many of the large fish move into deep water in the heat of summer, settling around shipwrecks and other structure that will hold bait. Some expert charter skippers fishing the big sounds of Mississippi and Louisiana know where sunken boats and oil rig debris concentrate these big fish in summer, but most anglers rarely target big trout in the dead of summer.

In winter, many quality trout move into the rivers and dredged shipping canals along the coast, seeking to avoid the chill of open water. Then it’s a matter of fishing deep and slow to get them.

Large live baits are among the most dependable attractors for giant trout, with a six inch pigfish or finger mullet being at the top of the list.  Catching these baits and keeping them lively is more work than fun, which is why so many anglers prefer to chase trout with artificial lures.

There are plenty of highly effective speckled trout lures for lunker trout, particularly when they’re in the shallows where topwaters come into play. The Heddon Spook and Rapala Skitter-V are both legendary trout catchers, while for sub-surface action suspending lures like the Mirrolure Mirrodine and the Live Target Scaled Sardine are among the best. Many anglers are also big fans of the larger DOA Shrimp and the DOA Bait Buster.

For a good trout lure that the largest fish can’t seem to resist, many expert trout anglers prefer a fish catching product that’s not widely-known outside the Gulf Coast and that is the Slick Lure, invented by North Florida flats angler Joey Landreneau.

It’s a soft plastic bait that looks sort of like an elongated gum-drop. There’s no fat swimmer tail, no fins, joints or built in flashers, no added scents or flavors.

For whatever reason giant trout love these speckled trout lures.

“It’s the most productive soft plastic jerkbait I’ve used in over 40 years of trout fishing,” says Captain Bobby Abruscato, well-known Dauphin Island guide. “I have yet to find anything that outfishes it—and I’m not sponsored by the company.”

How to Fish the Slick Lure

The Slick Lure has no action of its own so it’s up to the angler to bring it to life and with the right retrieve, it becomes a lunker trout magnet.

First, though, these speckled trout lures need to be rigged right. 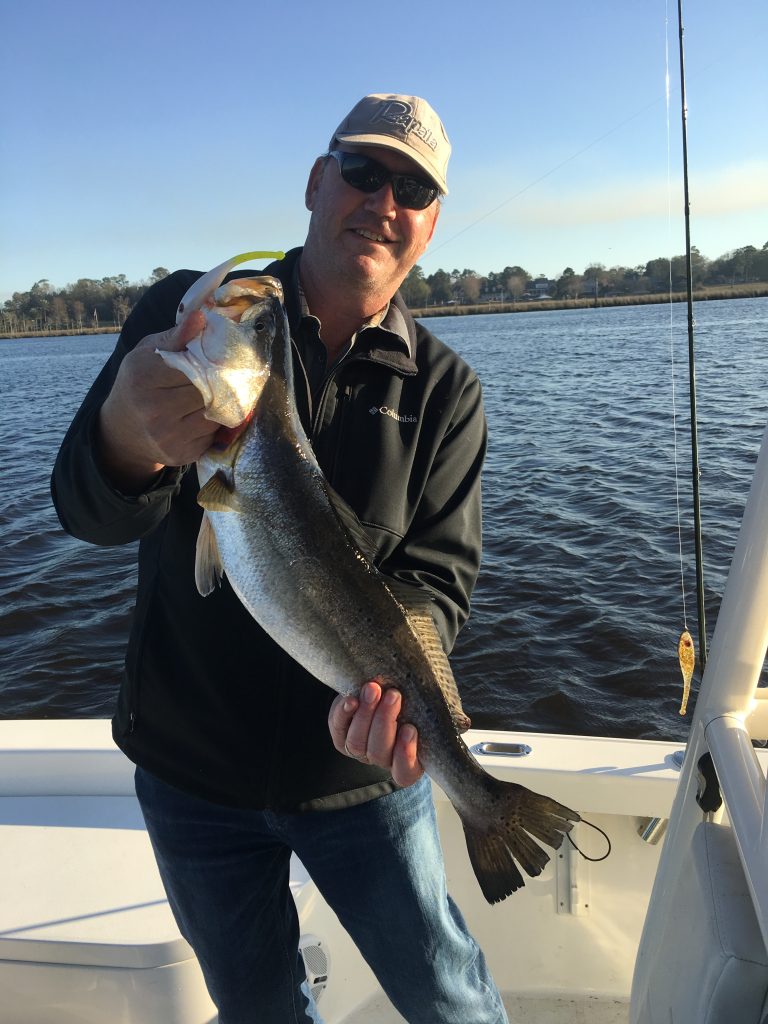 The Slick Lure is highly effective fished on marsh edges, particularly where creeks feed in on falling tides. (Slick Lure)

Joey Landreneau, the originator, advises using only the Owner Beast extra-wide gap (EWG) hook, either unweighted or with 1/8 ounce weight on the shank. The Slick is a “fat” lure, and smaller hooks just don’t punch through it adequately on the hook set.

The wide-gap hook design acts as a keel, keeping the lure upright as it’s worked.

It’s critical for the hook to run straight down the middle through the molded-in slot, and not bunching up the lure as it should lie perfectly straight or it won’t work the way it should. The hook should barely peek above the back of the lure and this effectively makes it weedless, but some anglers also like to “skin hook” the point just under the plastic, which makes the lure doubly snag-proof.

How to Work the Slick Lure

Abruscato keeps his rod high and reels slowly and steadily with just an occasional twitch to activate these speckled trout lures.

Captain Richard Rutland, another famed Mobile Bay guide, says his favorite tactic for working the Slick is to shake the rod tip, whipping it down and then up and then allowing the lure to sink between twitches. This causes the lure to dart erratically sideways before slowly dropping toward bottom, much like a dying baitfish. The trout can’t stand it.

Most experts fish the Slick on braid or fluorocarbon rather than monofilament. The mono stretches too much for effective hook setting. Those who fish braid typically use several feet of fluorocarbon leader in 12- to 20-pound-test tied in with a uniknot. The fluoro is stiff enough to prevent the lure from tangling itself in the braid as it works. Tie it on with a loop knot to allow it to work correctly. 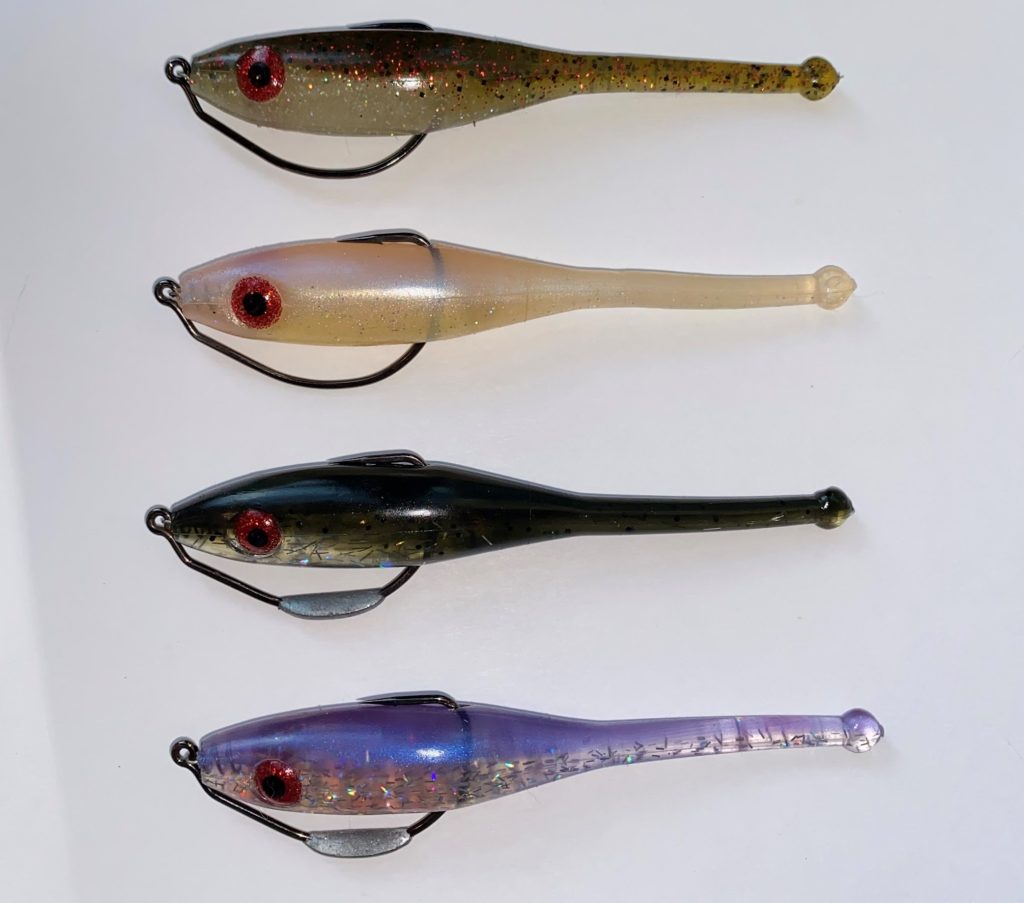 Slick Lures are best rigged on extra-wide-gap hooks as shown here, giving lots of “bite” to connect with the fish on the hook set. (Slick Lure)

Strikes can be anything from a light tap to an attack that almost takes the rod out of your hands. In either case, drop the rod tip, take up slack and make a super-powerful hook set, like you’re setting the hook while bass fishing with a Texas-rig worm. Otherwise, the big hook may not jerk through the lure to stick the fish.

CCA Alabama, the University of South Alabama Department of Marine Sciences and the Dauphin Island Sealab are cooperating on a study of seatrout and redfish to assist in management of both species. The program enlists CCA members to tag trout and redfish and rewards anglers who file a report after a tagged fish is recaptured.

Many of the most successful taggers like Captain Richard Rutland are fishing guides who are on the water almost daily, and who handle thousands of trout and redfish each year.

One of the things the study has revealed so far is that sea trout are always on the move. You may catch them in the same spots this spring as last, but in between they’ve been roaming a wide variety of inshore and bay locations.

The Coastal Conservation Association of Alabama provides funds for the materials and operation of the program. 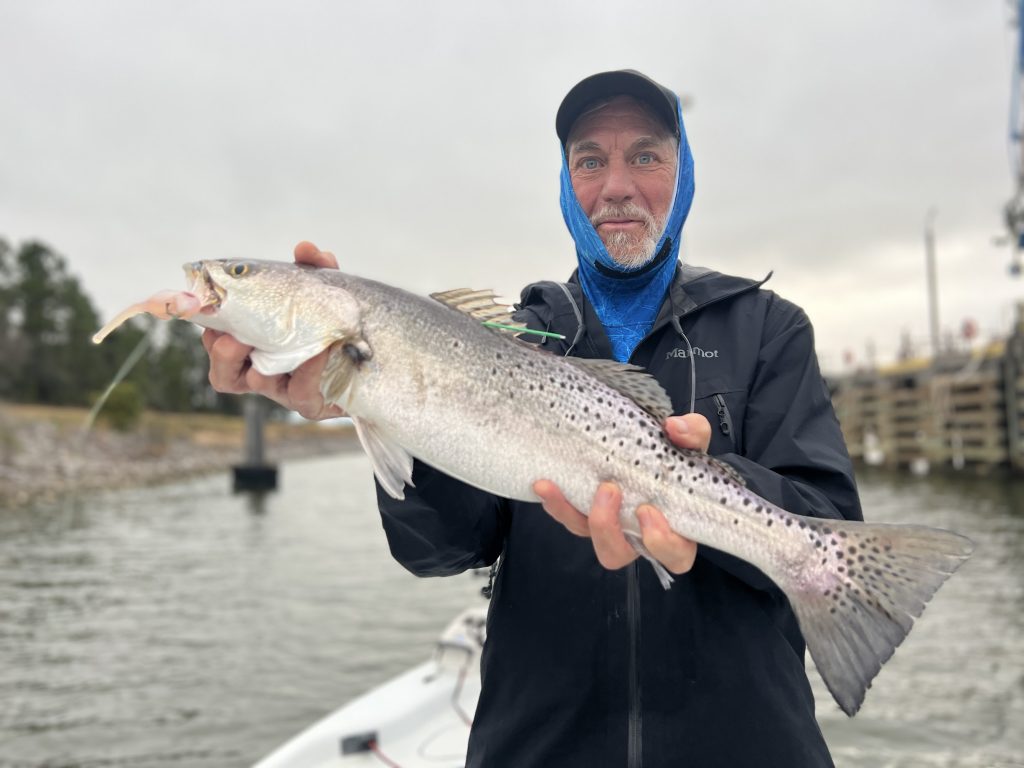 CCA Alabama, the University of South Alabama Department of Marine Sciences and the Dauphin Island Sealab are cooperating in a tagging study of trout and reds, with much of the funding provided by CCA efforts. (Slick Lure)

Anglers who are members of CCA are automatically eligible to take part in the Tag Alabama program, and there’s a training session,  either in person or online-, to demonstrate how fish can be safely tagged, how to keep and maintain data from the fish and how to submit it so the information can be entered into the program’s data base. There are annual contests for anglers who have tagged the most fish and categories and rewards for professional guides and for non- professional anglers.

All active CCA members who fish in Alabama’s coastal waters are eligible to become taggers. Orientation sessions take place throughout the year, and after attending the seminar, participants are ready to start tagging. Once they complete an orientation session, they receive a free tagging kit that includes 25 redfish tags, 25 speckled trout tags and a tag applicator.

The CCA raises funds to cover the costs of the program through fundraising banquets, donations, and through their saltwater fishing CCA Alabama license plate sales.  Forty-two dollars of the $50 cost of the plates goes back to CCA Alabama to help them with their conservation projects including the TAG Alabama program. The plates can be personalized. Learn more at info@ccaalabama.org and at http://tags.usouthal.edu.