By mid-summer, Mobile Bay and Mississippi Sound are more loaded with forage species of bait than any other time of the year. This easy access allows anglers the opportunity do some summer speckled trout fishing with live croaker, the best summer bait for specks there is.

Menhaden, also called pogies, are so thick at the mouths of passes, even a small cast net will yield enough bait for a day of fishing with one good throw.

A small bait trawl will also get plenty of both croakers and shrimp with one well-placed drag. Of course, the tanks in all of the bait shops are always full as the real pros know how to catch bait.

So, what does this mean to the speckled trout angler? Think of it like this. If you are driving down a long deserted highway and get hungry, you aren’t too picky about what you’ll eat. The 2-day old hot dog at the roadside gas station looks pretty good. That’s what winter fishing is like. The bait is scarce so the fish are more willing to eat that plastic imitation.

However, if you are driving down Airport Boulevard in Mobile where restaurants line both sides of the entire road, you are way more selective about what you can eat when you get hungry. That’s the situation with trout during the summer months. You had better have something real on the end of the line and present it in a pretty natural fashion if you expect to get bit. Here are a few tips on the best bait during the summer months.

When we are talking the absolute best bait for trout, croakers are king for me during the warm months. For some reason, trout don’t get a taste for croakers until it gets hot. Try one during the winter and it’ll die on the hook before a trout will eat it. Put it on during the summer and you’d better hide behind a tree because the trout will jump into the livewell to get to them. Go figure! 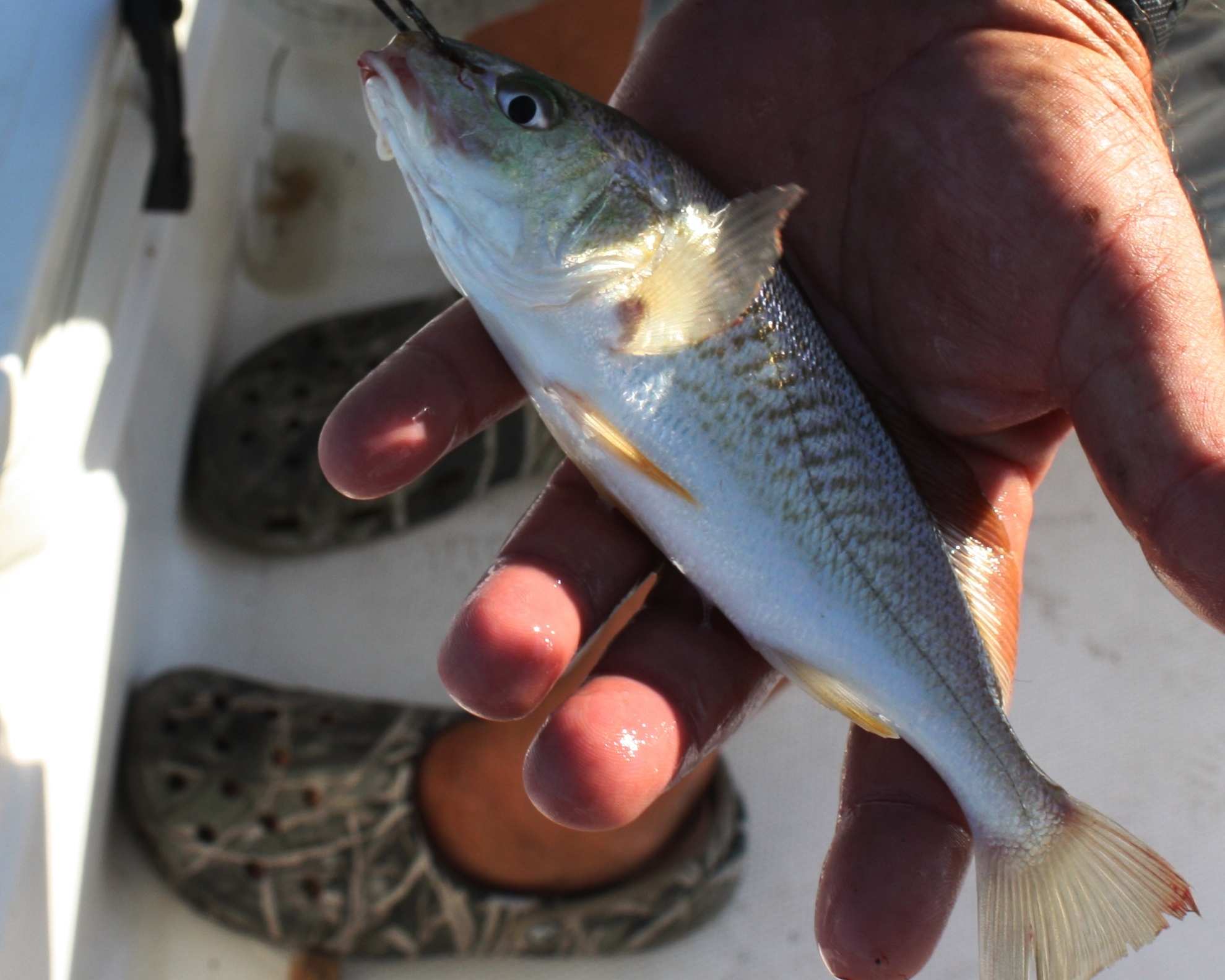 Live croaker are the absolute king when you’re talking the best bait for trout win the summer months.

The key to using croakers, first be sure they are lively. I like to catch my own on the day of the trip. I use a 12-foot bait trawl that has a dropped back lead line. This helps keep the croakers from going over the net before they realize they’ve been dragged up. My net does such a good job at catching croakers that I frequently have enough croakers for the day in the wings of the net that I just dump my bag. If I do buy croakers, I take a look at them to be sure the dealer has handled them properly. If the fins and bellies are red, don’t waste your money because they are going to die, probably before you even get them on the hook.

Also, on that subject of money and time, croakers are expensive so you’ll want your croakers to stay alive. They can’t very well be the best bait for trout if they are dead before rigging them up. Be sure you have a good livewell system. I prefer recirculated water over raw because I can control the environment. I fill my livewell outside of the boat launch or marina areas where there can often be fuel or soap floating on the surface. I run out to some open water and fill the well so I know that I have good clean salty water in the well.

I use a recirculation pump that picks up from the bottom of the well and sprays into the top. I also have a pump that forces air through two stones. The air not only adds oxygen, but also helps keep the water cool. Lastly, I throw a Ziploc baggie of ice in the well first thing in the morning and then add another during the day if I am still fishing. Cool water is magic on croakers and really keeps them frisky through the hot summer day.

Just having live croaker on the end of the hook while summer fishing for speckled trout doesn’t guarantee success – at least not from the big ones. You’ll need to present them in a natural fashion. Croakers are bottom dwellers. Thus, they look natural in the lower parts of the water column.

I use three different rigs with croakers. The first is a simple tight-line rig. Mine is a Carolina rig with a couple of changes. I don’t use a leader, but simply use a small split shot to keep the sliding sinker up the line from the hook. My weight is bullet shaped rather than egg shaped. This minimizes the number of hang-ups since it’s the weight rather than the hook that catches on the bottom most of the time.

The real key to the rig is the hook. I use a Number 4 bronze Kahle (suicide) hook. I hook the croaker through the top lip only. Be sure to catch just enough meat to make your cast because you want the croaker to come off of the hook when the trout bites. If you are missing trout and coming back with a mauled croaker, you are hooking the croaker too deep.

Hooking the bait through the lip allows me to just leave the rod in the rod holder because the Kahle hook does such an incredible job of hooking the fish. As a matter of fact, I tell my charters not to even set the hook if they do want to hold it.

Another rig for speckled trout fishing with live croaker is a free line. This rig is a weightless one and I use a Number 8 treble. I use this when fishing structure with no current. Here, I hook the croaker just in front of the dorsal fin and toss it towards the structure. I leave the line slack so the bait can swim down on its own and that is the key. Don’t pull on the line or the croaker will not be able to breathe through his gills. If that happens, it will die shortly. This killer technique will have reeling them in all day long on your next summer speckled trout fishing trip. 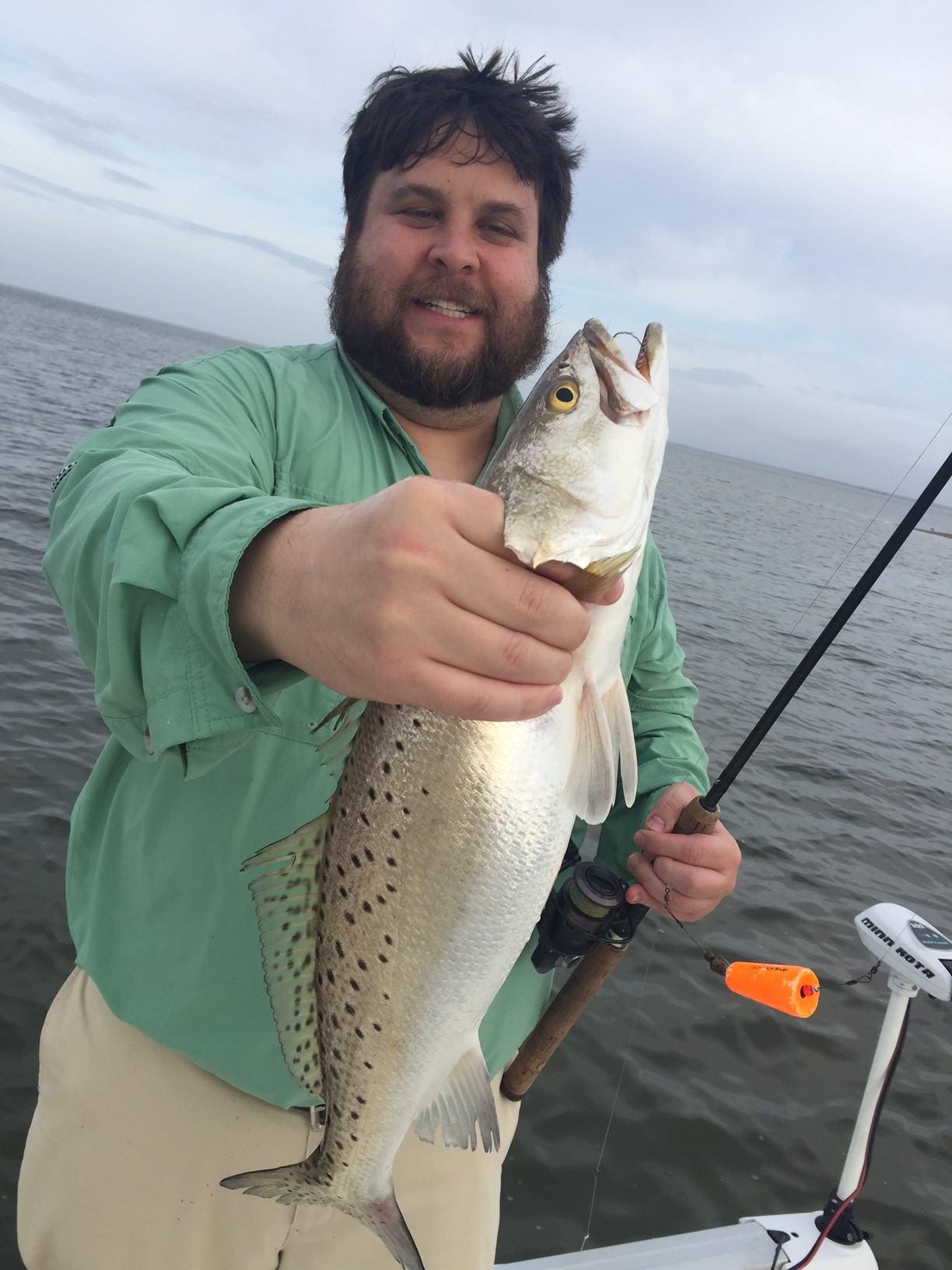 A slip cork can be a hassle to rig up, but once coupled with a nice live croaker, the results are well worth the effort

The third rig is a slip cork. This is a very cumbersome rig, but it so effective you’ll need to learn to use it during the hot months. There are a few different ways to rig one, but the key is to be able to adjust your depth so you can present the bait in the lower third of the water column.

With croakers, I hook them just in front of the dorsal and allow the cork to drift feely with the velocity of the current by leaving the reel out of gear. That is the big key to being effective with a slip cork, yet so often I see it ignored. People will be set up perfectly, throw out the cork rig and stick it in the rod holder. By doing this the line will come tight and the bait will rise to the surface, definitely not a natural look!

Pogies and shrimp both also work well when summer fishing for speckled trout, and I use them on the same rigs as mentioned. My selection of bait is based on the conditions. Armed with my tips and some live bait, you’ll be catching specks all summer long. 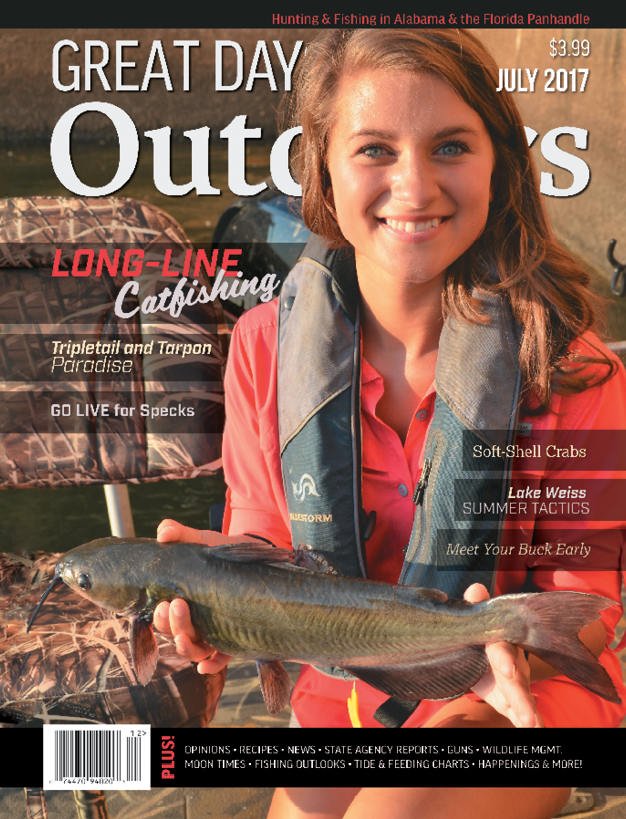