Spring on Alabama’s coast means these black-and-white fish are ready to battle.

On this calm sunny morning, the anglers in the small boat which had motored up the river that feeds into Mobile Bay got ready for their day’s action to begin.

Live shrimp were hooked up and then gently cast toward some large boulders placed in the water of this small bayou to help stabilize the shoreline. Even though the boulders were not originally intended to attract fish and anglers, one of the major side benefits of the shoreline stabilization structure was just that—some really fine fish were attracted to the hard structure.

One angler made a sharp jerk but came up empty. The second angler let his fish eat a bit and then tightened up his line. A strong fish boiled the water of the small river, prompting the angler to slip a fat black-and-white fish into his landing net.

He smiled at the first angler who had missed his fish and said, “See? That’s how you do it.”

The first angler re-baited and said something gruff but inaudible to his friend before casting his shrimp back toward the rocks. This time, his line came tight. He played his black-and-white-sided sheepshead to the boat.

These two fish were just the start of a great day catching sheepshead in small backwaters of Mobile Bay. No doubt about it, spring is a good time to go up the creek and find a lot of fun catching those strong, delicious sheepshead.

Most of the feeder creeks that empty into Mobile Bay on both sides will have sheepshead present in spring. Of course, some creeks, bayous and channel mouths are better than others. For whatever reason—water quality and depth, the presence of food—sheepshead prefer some smaller waters more than others.

Bon Secour River has traditionally been a very strong producer for sheepshead in early spring, so anglers who come up the Bon Secour from Mobile Bay won’t have to go far to find good fishing. Just as soon as boat docks start appearing on the shores of Bon Secour River and the main body of Mobile Bay is left behind, sheepshead anglers can expect to find fish.

The shoreline between Billy’s Seafood and Aquila’s Seafood is usually very good for spring sheepies. Sheepshead will be thick around the docks of Bon Secour for a long way upstream, too.

The ICW is another great place to find small-water sheepshead in spring. Many of the small private marinas and condominiums along the ICW will have large boulders which stabilize the banks and shorelines, and these boulders are prime places for anglers to find hungry sheepshead. Older dock structures along the ICW can also be good producers of striped sheepshead.

I have had very good luck fishing the first rocks appearing on the shoreline of the ICW as it leaves Mobile Bay and heads east toward Orange Beach. A private marina and condo complex have channels that lead to the interior of the units, and these are good waters to find sheepshead.

These marina rocks may not be impressive above the water, but below the surface, they attract sheepshead in spring.

Anglers who can fish these ICW rocks when the tide is moving will be in prime sheepshead territory. Moving water is always a good thing when catching sheepshead. Tide going in or out will almost always improve the bite. Let a live shrimp or fiddler crab sink just upcurrent of a rock or a dock piling. When the bait drifts with the current past the hard structure, hold on and watch the line! That’s when the buck-toothed sheepshead love to strike. 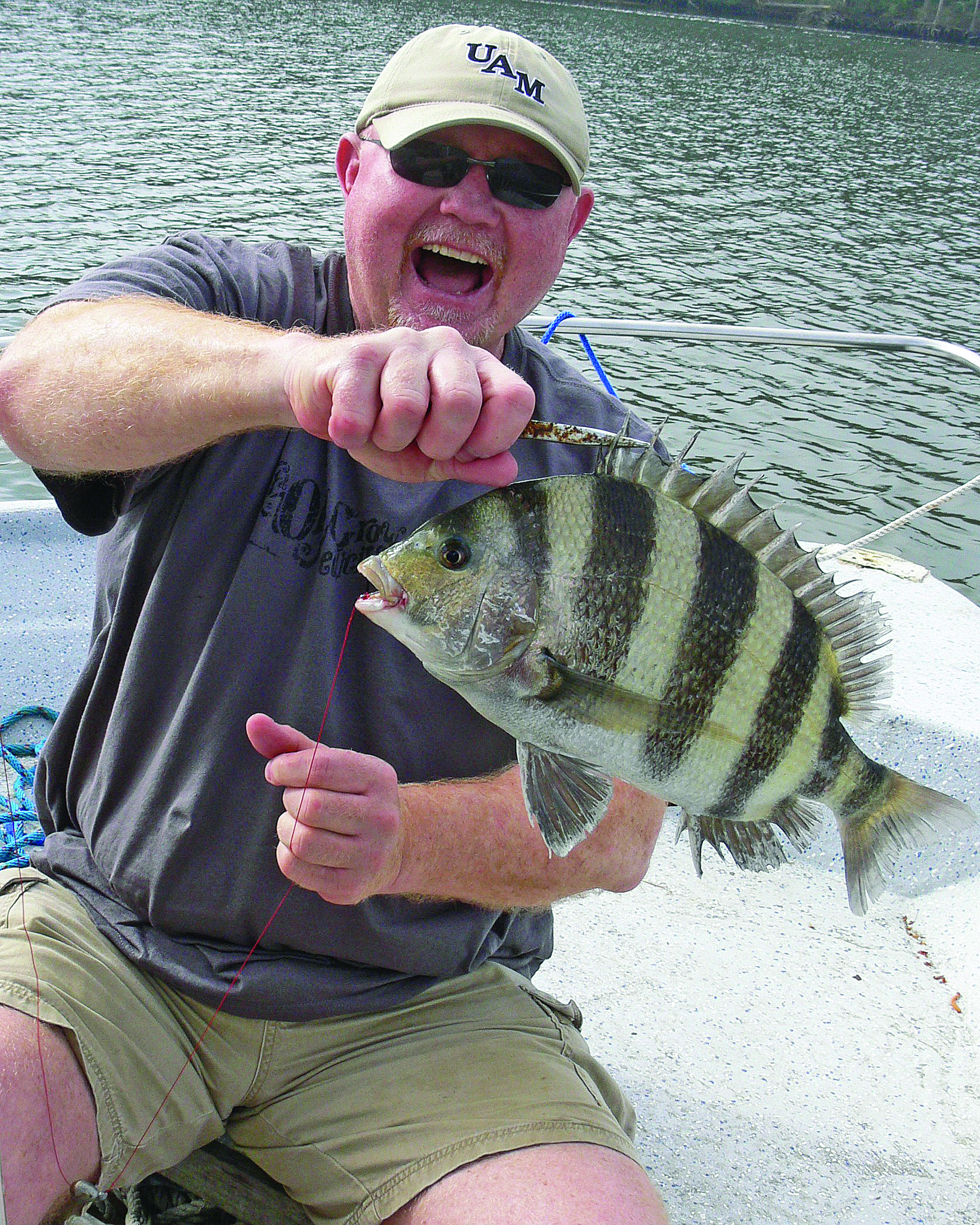 Everyone likes catching sheepshead. They have lots of pulling power. This photo was taken by Ed Mashburn.

A good thing about fishing for sheepshead is that it doesn’t require a lot of specialized equipment. A medium action and weight-spinning or bait-casting rod and reel setup will work just fine.

Rods need to have fairly sensitive tips because sheepshead are notorious for being soft strikers and expert bait thieves, and a lighter rod tip can help anglers detect the rapid strike of a sheepshead.

“Long casts are not usually required when sheepshead fishing. In fact, much of the fishing is done straight up and down.”

Twenty-pound test line is plenty, and since sheepshead are almost always caught on live bait, not a whole lot of specialized tackle is required. A box of ¼ to 1-oz slip sinkers with split shots is needed. Attach the split shot about a foot above the hook to stop the sliding weight.

Several hooks will be needed because anglers can reasonably expect to hang up a lot in heavy underwater structure, which sheepshead prefer. If you’re not hanging up from time to time while sheepshead fishing, you’re not fishing in the right place.

Long casts are not usually required when sheepshead fishing. In fact, much of the fishing is done straight up and down. The bait is simply lowered alongside the dock piling, bridge piling, or rock structure in the water. It’s best to not have a lot of line out when catching sheepshead in spring. Lots of line out makes it much harder to detect the gentle bite of a sheepshead.

The biggest problem I have found when using Kahle hooks on sheepshead is that these hooks can be very difficult to remove from the tough jaws and lips of sheepshead. Pliers will almost certainly be needed to remove a solidly-set Kahle hook, and this often bends the hook out of its funny shape. If this happens, cut the misshaped hook off the line and toss it; it’s no good if it’s out of shape. Tie on a new Kahle hook and go after the sheepies again.

Best Baits and How to Find Them

I’m certain that some anglers have caught sheepshead on artificial lures, but I never have.  For me and for most anglers, sheepshead fishing is a live bait deal. There are two live baits of choice for most anglers when fishing for sheepies in spring—shrimp and fiddler crabs.

A live shrimp lowered alongside a dock piling or rock structure won’t last long in spring when sheepshead are around. However, it can be very difficult to find live shrimp at local bait and tackle shops in spring, and although fresh-frozen shrimp will usually work it is not nearly as effective in most cases as live shrimp.

Fiddler crabs have saved many spring sheepshead trips. These hard-shelled little crustaceans can be found on most Mobile Bay System shorelines around grasses and brush piles and under trash that has floated up on the shorelines.

Fiddlers tend to run in bunches, so when one is located there will usually be others close by. They can be hard to catch after they warm up a little when the sun rises, so catching them early in the morning is easier.

Here’s another hint. If you know you’ll need fiddler crabs for a trip the next day, put out a piece of plywood or other wooden stuff near some shoreline grass or weeds. Fiddlers will often congregate under the wood overnight and can be easier to gather in the morning.

Of course, the easiest way to find live fiddler crabs is to buy them at bait and tackle shops. Most area shops will have live fiddlers for sale, but they tend to sell out fast since they are such reliable baits for both sheepshead and redfish.

Speaking of redfish, they will often be found in the same places that sheepshead inhabit and they love the same live baits that sheepies enjoy. It can be a real shock to an angler to discover that the bait sent down for a three-pound sheepshead has been taken by a 12- or 15-pound redfish. It’s the kind of shock that most anglers can deal with, though.

Spring anglers on the Alabama Coast soon learn that one of the facts of life we all have to deal with is that winter and early spring water levels can vary greatly.

If we have a strong north blow, water levels will be much lower than usual. This can present problems for both fishing and navigation, especially in the smaller creeks and bayous.

I’ve had sheepshead trips in the smaller backwaters presenting me with water so low that places where I usually depended on finding good black-and-white fishing were almost high and dry. I had to switch my plans and find other, deeper waters to fish.

Another problem low water can present to spring anglers is that motoring a boat can be a challenge. I’ve run hard aground in spring on bars and mud banks which I expected to be at a safe depth under the water.

I can also attest that running over an old crab trap exposed in low water conditions (such as often happens in spring) is no fun. It can be very hard on an outboard lower unit. The angler needs to be aware that water levels in spring can be much lower than usual.

Another special consideration for spring anglers who are going after sheepshead is this: sometimes when everything works out right, we can catch those black-and-white bait stealers in great numbers. When the sheepshead bite is hot, it can be very hot. This is not a bad thing, but we have to keep in mind that those fish we catch and bring home have to be cleaned, and sheepshead are not easy to clean.

It’s easy to lose sight of how many fish are tossed in the live well or ice chest, and it’s also easy to get discouraged later at the prospect of cleaning two or three full limits of sheepshead.

We anglers need to keep only enough sheepshead for the next meal, and not take home so many that we get tired of cleaning them and just toss the remaining fish away. Alabama’s limits on sheepshead are quite liberal, but these delicious, hard-fighting fish are just too valuable to waste because they are difficult to clean.

Speaking of eating, sheepshead are some of the best eating fish in the bay. Fried up, they are some prime cuisine. But my favorite way to prepare a bunch of sheepshead fillets is to blacken them. I get an iron skillet smoking hot over a propane cooker outside, and then I drop lightly-olive-oiled, seasoned fillets. I like just a little bit of Tony’s to give some flavor on the very hot skillet and let the smoke and flames roll up. After just a few minutes, I use a long-handled turner to flip the fillets over.

When the edges are charred and the flesh is white, I move the fillets to a platter, turn the fire off, and run inside with the sheepshead fillets to complement the rest of the meal. My, this is some kind of good eating on a spring evening!