In March, an angler’s mind turns to thoughts of spring crappie fishing.

What’s the most popular freshwater fish in Alabama? Well, bass get lots of attention, and bass tournament winners get paid lots of money. On the other hand, catfish are impressive because of their large size, as are striped bass. However, for a sheer number of anglers and fish caught, it’s obvious that the most popular fish in Alabama is crappie. These fish don’t jump like largemouth bass. Also, they don’t pull like white bass, but they’re great fun to catch and the best to eat. That being said, March is one of the very best times for spring crappie fishing, and the lakes and rivers of Alabama are some of the very best places in the world to catch a mess of big spotted crappie. 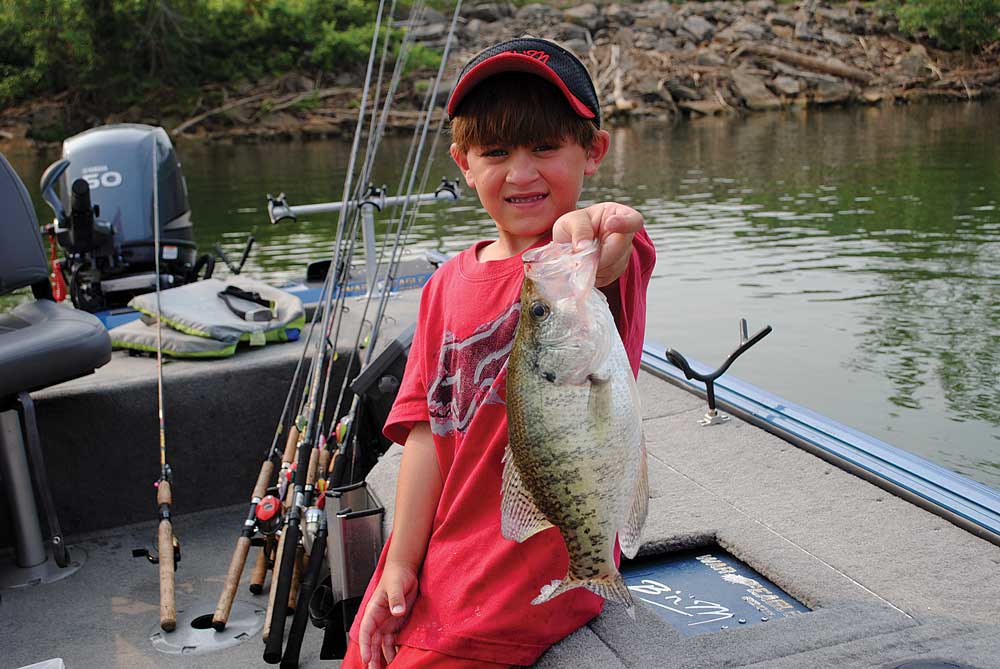 Our friend and crappie fishing expert, Brad Whitehead, guides lots of anglers seeking large ice chests full of slab crappie on the lakes of North Alabama. Because of this, we asked him to describe to us the way things might be on a “typical” March day spent chasing crappie.

“A day in March?” Captain Brad says. “Well, it can go two ways. The first way is it might be a cool, crisp morning that needs a little warming up. The second way the day could turn is this: You went to bed the night before having that perfect day, and yet you wake up in the morning to cold and windy conditions. It happens every March.”

March crappie chasers have to be willing to adjust to the weather. This is because, in March, both cold and warm are possible in the same day.

When asked to name his favorite place to fish for crappie in March, Captain Brad was quick to answer. “This time of year, I’m fishing Pickwick Lake in Colbert County. I like to put in at Rose Trail Park.”

“When a boat with several rods rigged out drifts through a school of hungry crappie, multiple bites can come at once.”

We’ll be fishing out of Captain Brad’s custom-built WarEagle boat. This boat has been designed for “side-pulling,” which is a crappie fishing technique that Captain Brad has helped develop. When asked to describe this technique, Captain Brad says, “Sidepulling lets you put the jigs in the right depth and keep them in the right depth at all times. WarEagle boats designed a boat just for this. It gives all of my clients fresh water to fish all day.

Crappie anglers who are rigged for multiple rod situations—spider rigs and sidepulling rigs—will have to be prepared for some rapid action and reaction. When a boat with several rods rigged out drifts through a school of hungry crappie, multiple bites can come at once. It can be hard to know which fish to land first and a couple of extra hands to reel in and remove hooked crappie would be helpful. However, it’s a good problem to have and it’s lots of fun.

What Will We Catch Them On?

Just about anyone who has ever fished for slab crappie knows that live minnows are the “fall-back” bait for crappie fish. Some days, the slabs just won’t touch anything else. Just about any bait and tackle shop on any lake that holds crappie will have a tank full of minnows for sale.

Drop a lively minnow hooked through both lips on a gold, long-shank hook with just enough weight to sink the minnow slowly. I hand-peel line from the reel and let the minnow sink into the water under a little bit of tension and count the hand pulls as the minnow sinks. When the minnow gets to the depth that the crappie are holding, the crappie will generally let me know they are there. If I’ve kept track of the hand-pulls, I know how deep to fish the minnows.

In my opinion, a very slow rate of sink with live minnows is important. Crappie will eagerly move upward to take bait, but they don’t really like to go down for a meal. I want to allow the crappie to see the minnow slowly falling towards them so they have time to move to the bait and take it. However, too much weight makes the minnow sink through the “strike zone” too rapidly sometimes. Quite often, when one crappie is found, others will be there. Crappie are not solo fish. They like to run in big schools.

“I always take minnows,” Captain Brad says. “There are days you don’t need them, but there are always those times you will wish you had brought them. For artificial lures, I use Mister Twister products. They have a full line of all the crappie products that you need. I always rig two baits per pole. This gives you extra bait in the water, and you can use two different colors.” Some days, for whatever reason, crappie prefer a certain color of jig over any other color.

On a crappie trip I took a few years back, all day long we caught crappie on jigs with yellow accent colors. Then, we ran out of yellow-tipped jigs and had to pack up and go home because it was yellow or nothing.

When I’m fishing jigs for crappie, I have to constantly remind myself to slow down. Crappie are not “pursuit” fish like bass. They like to ambush their prey, and they like slow-moving bait. Because of this, many crappie bites come on motionless or barely moving jigs. The best thing about the soft plastic grub and ripple tail bodies made by Mister Twister lures is that the tails will move attractively with almost no motion provided by the angler.  Often, a straight up and down, very gentle jigging motion will take crappie in March.

Crappie anglers should be sure and have a good supply of hooks and sinkers and different jig bodies. Crappie love to school near brush and underwater structure, and it’s not uncommon to go through a boxful of hooks and jigs during a spring crappie fishing trip. The fish won’t break the line, but a snagged tree limb surely will. 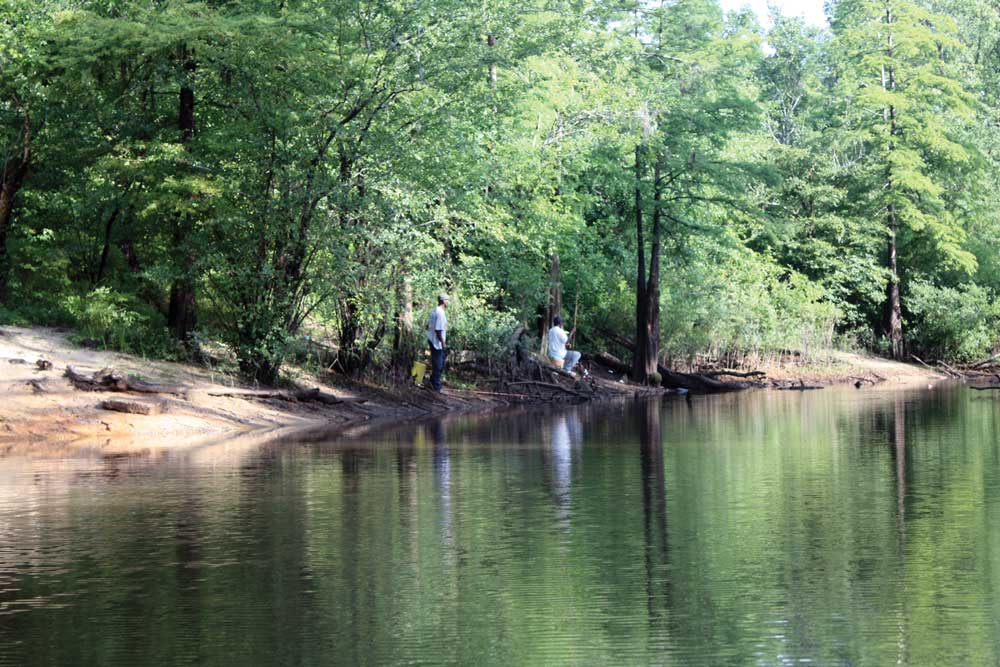 Crappie have a reputation for having thin, tender mouths, and this is true. However, it’s perfectly acceptable to be decisive when setting the hook. “Set the Hook!” advises Captain Brad. “Guys have this thing with crappie having a paper mouth. It’s not as paper as you think. I fish sometimes in thirty feet and deeper water. You have to set the hook firmly when fishing that deep.”

Captain Brad continues. “I recommend B’n’M Pole Company’s rods because they have a rod for all fishing styles. Also, because their rods are built so crappie anglers can set the hook and not be afraid of pulling it out of the fish’s mouth.”

Anglers also make the mistake of fishing for big crappie comes when they have the big ol’ slab at the boat. “Use a net,” he says. “I have seen too many guys who think flipping them in the boat is cool. Flipping the fish in works if you’re bass fishing on TV, but it doesn’t always work with crappie”. Because of this mistake, some very big crappie have been lost at the boat side. This happens when an angler tried to flip them into the boat, and the hook just pulled free when too much weight was on the hook.

Weather in March is always a consideration, and crappie anglers have to be aware of changing conditions. Captain Brad tells us, “A big mistake many springtime crappie anglers make is that they don’t look at the weather. They get it in their minds that they are going to fish one part of the lake then Mother Nature says, ‘No, you are not fishing there!’ Wind is what I mean.”  If the wind changes and comes wrong on a certain shore, spring crappie fishing, which demands subtle and precise presentation of bait and lures, is going to be very difficult if not impossible. Because of this, March crappie chasers need to be flexible and able to make changes in plans.

There is another weather condition that can make a big difference. According to Captain Brad, this happens when we fish on days that start out cool and then becomes steadily warmer all day. Because of the weather change, you won’t find the fish in the same place they were found just the day before. Springtime crappie move around a lot. They also change the depth they hold at and feed at according to the temperature.

Captain Brad advises crappie anglers who are visitors to different lakes to be willing to relocate. “March is the easiest time to fish,” he adds. “Move around until you reach active fish. Pick an area where there are crappie fishermen fishing and jump in there with them. Get a few simple colored grubs or jigs and go. This is the rut of spring crappie fishing.”