Every year we get a dose of August and September elk hunting articles.  Whether it is blogs, online videos, magazine articles, or the painful TV hunting shows, the “norms” of elk hunting know how are time and again hashed over.  I listen, watch and read the “elk experts”, of which I am absolutely convinced there are none.  Now there certainly are some marketing experts, but elk not so much.  There really are some pioneers out there, and many folks with knowledge and helpful insights to assist the novice hunter and even the more experienced guy.  The more experience you get, however, the more you realize you like the rest, are no expert at all.  Elk constantly adapt to their environment, and that means just when you have them figured out, they go and adapt some more and you end up playing catch up.  I think sometimes a norm gets established by the constant repeating of such by folks who simply read it someplace else.  In this blog, I want to attack some of the commonly held myths about archery elk hunting. 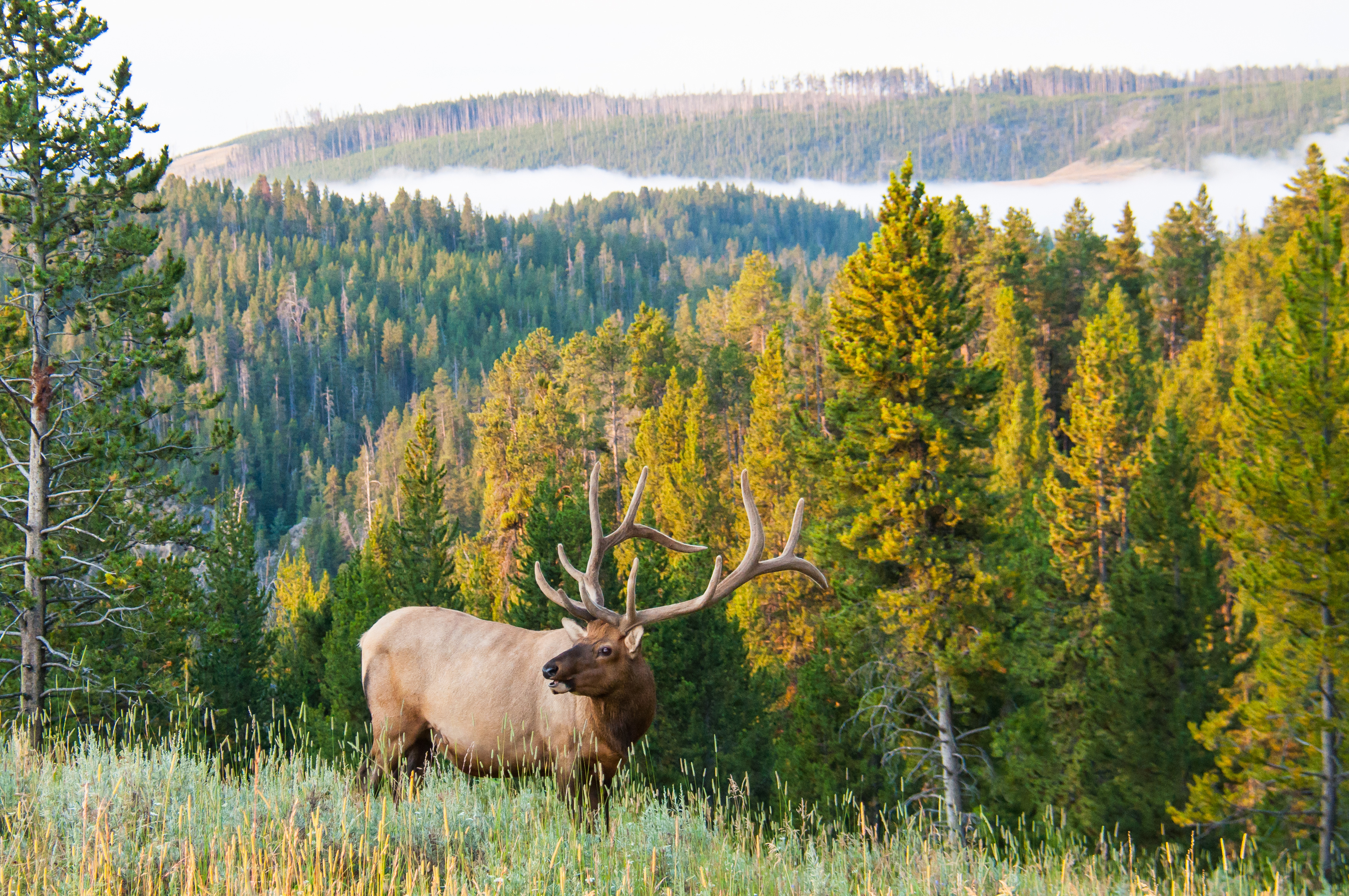 An elk walks along a hillside on a foggy morning

Like many other hunters, I have spent a fair amount of time on north-facing slopes, and I have found elk do not bed there anymore then they do other areas.  I have found elk on southern slopes, in the relatively open, on 85 degree days.  I have found elk on western slopes and eastern ones to, and a lot of elk on creek bottoms.  Many folks will say elk prefer cool north slopes with thicker growth.  This is not so anymore.  The addition of the wolf to the alpine ecosystem is has changed elk bedding behavior.  Elk will bed wherever they feel secure, and if that means an 85-degree southern slope, then there they will be.

” If you pack deep into some remote un-hunted areas you will hear the bulls screaming through into November.”

The rut begins in late August when daylight begins to shorten and runs through Thanksgiving. The peak breeding cycle is in mid to late September and when most of the vocalization occurs.  Many hunters have confused vocalizations with the rut.  If you pack deep into some remote un-hunted areas you will hear the bulls screaming through into November.  I once called a 5×5 bull in on Thanksgiving weekend where he was quickly dropped by my hunter.  In hunted areas bugling can stop and big herd bulls can move on the second bullets start to fly, but that doesn’t mean the rut is over.  I really like the second breeding season in October, around the second week, as all the hunters are gone because “the rut is over.”

In reviewing our trail cams on wallows, and years of chasing elk, wallow activity seems to peak in August, and begin to quickly taper down through September.  A better source of stand hunting in midday is to sit water trails during the rut below where the elk are bedded.  If a bull has been chasing cows and fighting off other bulls, he gets thirsty.  About midday that old bull is looking for a drink of water, not a bath.  That doesn’t mean a bull won’t hit a wallow, but a water trail to a creek or drinking source is a better bet.

I once was on this bandwagon.  However, having lived with the wolves for years now, I realize that it is really wolves in relation to the elk’s habitat.  They have decimated the herds in some areas, but almost everywhere the herds are coming back.  In Montana with the wolves, we still have the majority of elk units over objective.  Yes, wolves can affect elk behavior, but they certainly have not “silenced” the bulls.   I have been in screaming matches with bulls while wolves were howling the displeasure over the matter a few hundred yards away, it didn’t affect me or the bulls.  A fully mature rutting bull elk is not a target of opportunity for a wolf pack.  In the winter when the bulls are a different frame of mind and physically weakened state, then the wolves have a different approach.

Archery Elk Hunting Myth #5: Only use bugles to locate, then switch to cow calls.

” I think a lot of hunters mistake a bull calling to them versus a bull talking to his cows, and misplay the call-up.”

Fully 70-80% of all the call-ups we do are with some sort of bull sound.  Cow calling can be effective in the right scenario, but bull sounds are your best bet in general.  I think a lot of hunters mistake a bull calling to them versus a bull talking to his cows, and misplay the call-up.  Another thing to consider, cows will often form social structures and won’t accept another cow coming into the herd.  I have seen many cow groups pull bulls away from a calling cow, yet it is almost never talked about anywhere.  The adage that bulls would rather love then fight is probably true, but if a herd bull is going to remain a herd bull, he will indeed have to fight.  I have seen areas torn up with hair and blood all over the place more than once.  I once watched a big 6×6 and a 7×9 leave their cows and go out of their way to confront each other.  Brother, that was a fight to the finish when they locked up. A brutal contest of violence and I watched in awe as they fought over a ridge and down the other side.  I finally realized I was hunting after a few moments but they were long gone by the time I got over to the area.  I’ve seen countless bulls furiously chase satellites away and made no effort to avoid confrontation.  Let me ask an honest question if you run a locate call at a bull and he instantly responds in a defensive manner, why would you then start sweet talking him with a cow call?  Think about this, some fella is walking along with his girl and you yell “I like your girlfriend buddy!”  Now a fair amount of fellas may scamper off with their girlfriends, probably Democrats.  However, another portion is going to start heading in your direction real quick.  When they do are you going to say “hey baby, I’m right here looking for some love.” That will probably creep him out, and at that point, he will also scamper off with his lady.

Hopefully, the next time you here one of these elk hunting “facts” you can think about it a little more.  Always remember there really are not any elk hunting “experts”.  Elk are highly adaptive creatures that simply seek security, food, and water.  Whatever combination of events requires them to behave in a manner that will include those basic elements, that is the only behavior you can expect.