What’s not to love about hunting squirrels with a dog? Spending time in the great outdoors with your canine companion, chasing bushytails, and making memories with your buddies, are all apart of training squirrel dogs.

But, you don’t want to hunt with just any dog. You want one that not only enthusiastically trees squirrels, but will follow your commands as well.

When it comes to great squirrel dogs, both nurture and nature come into play.

“When it comes to great squirrel dogs, both nurture and nature come into play.”

Danny Williams, president of the American Treeing Feist Association (ATFA), has been breeding, raising and training squirrel dogs since 1985. He says good genetics and good training techniques are both necessary for producing a worthy feist.

Williams hunts with his dogs six days a week in the Mark Twain National Forest where he lives in Donithan, Mo., and has perfected the art of training a pup. Check out his tips for raising and training squirrel dogs. 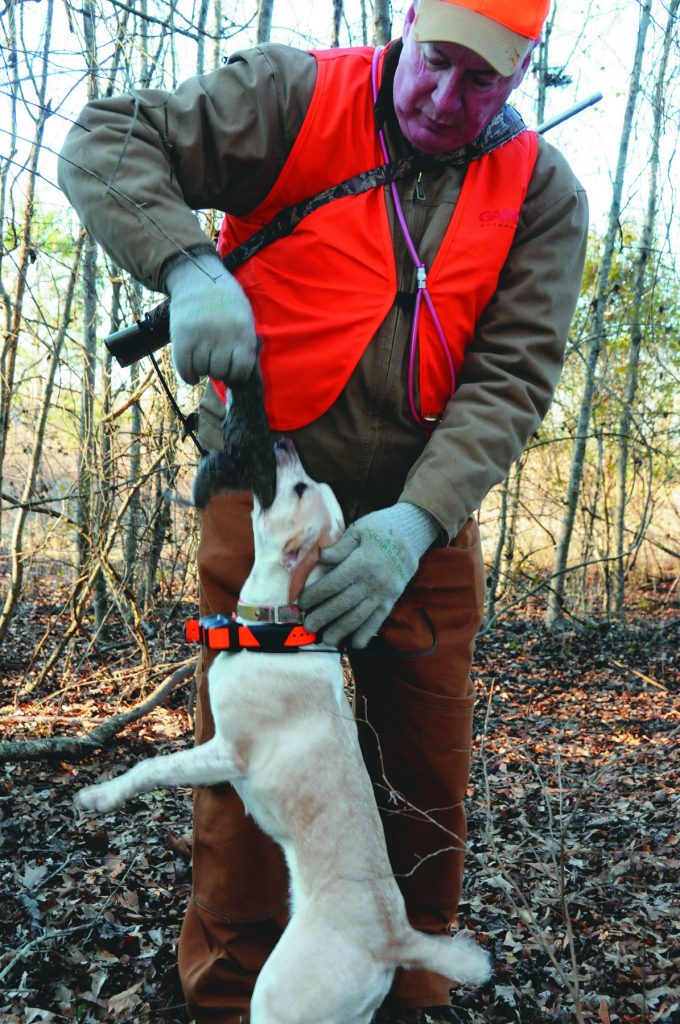 Select a quality pup: “The first thing you need to do is find a reputable squirrel dog breeder,” Williams says. “Don’t buy any old cheap pup and expect it to turn into a good squirrel dog. Select a pup that has good squirrel-hunting parents. In fact, I recommend hunting with the pup’s parents to learn more about their qualities before you take it home.

Socialize it: Once you’ve selected your pup, spend a lot of time with it. Handle it and play with it as much as you can. Take it riding with you and let it play with your or your neighbor’s kids. Also, make a lot of noise around it. “I’ll bang the food dishes when I go out to feed the pups, so they get used to noise. I’ll also shoot a .22 rifle everyday so they get used to that sound as well.”

Tease with a tail: Once the pup reaches four or five months old, attach a squirrel hide or tail to a one-foot long string and attach the string to an eight-foot-long stick. Hold the stick in the air and encourage the pup to bark at and chase the hide or tail. “Make sure you hold it high in the air. Everything you do needs to be up in the air when it comes to training squirrel dogs.” Do this once a week. If he barks right away, great. If not, try again the next week and the next.

“I trap a squirrel in a live trap to use,” Williams said. “I’ll tie a rope to the cage and will throw the rope over a tree limb so I can lift the cage with the squirrel in it up into the tree. Once the pup is barking at the squirrel, I’ll turn the squirrel loose so the pup can chase it. When it goes up the tree, the pup should bark at it. Typically, the pup will be scared of the squirrel in the cage the first couple of times you present it. It may not bark or chase the squirrel when you let it go the first few times, but eventually it will. Just keep doing it about once a week until the pup gets used to chasing the squirrel.”

Take it to the woods: Take the dog out in the woods and let it locate and tree a squirrel. According to Williams, this part, and training squirrel dogs in general, requires a lot of patience. “You’ll wear out several pairs of boots until you get your dog trained, but that’s okay.” The first time your dog trees a squirrel, make sure to tie up the dog before you shoot the squirrel because you don’t want to scare your dog. Repeat that process a couple of times until your dog gets used to it. It’ll soon get used to the sound of your shot after it trees and will look forward to watching the squirrel fall and retrieving it. Williams says it’s important to only take one dog out at a time. “Pups use their ears, eyes and noses when they’re learning to hunt. If you take two or more pups out, they will mess each other up.”

Use a training pen if you can: “I have a three-acre training pen where I let my pups run loose and learn to tree. I have squirrel feeders in there to attract squirrels. I also trap squirrels and take them out there and turn them loose.”

Cage or kennel your pup: Once the pup starts treeing, don’t leave it out loose to run around in the backyard while you’re away at work. “If your dog trees a squirrel while you are gone and no one goes to it and shoots the squirrel, the dog will begin to lose interest in treeing squirrels. It may continue to bark at squirrels, but they won’t hold its attention.”

Repeat: Take your pup into the woods a lot. Williams says he hunts with his dogs every day, and that repetition is necessary for developing a good squirrel dog. “In fact, all of these training tips need to be repeated on a regular basis. Dog owners need to understand it takes a lot of time and patience for training squirrel dogs.”

While there is no guarantee that your new puppy will turn into a great squirrel dog, following these training tips will help increase your odds for success. So, get started and enjoy the coming years with your new squirrel-hunting companion.