“Whoa” is perhaps the most important command for your gun dog.

The most important command without a doubt is training your gun dog Whoa! This simply means stop moving “NOW.”

Most pointing dog breeds from good bloodlines do not have to be taught to stop. When they are puppies, they will stop and point anything that catches their interest from butterflies to birds. The biggest challenge for us and our pointers is to teach them to hold their point until we give them the release command.

“By disciplining the dog around a bird too early, we would be risking a chance of making it bird-shy at a very young age.”

The initial teaching of this command takes time and patience to get it right between the dog and its owner. If we want to have successful pointing dogs, we do not want to ever start out teaching whoa around birds.

By disciplining the dog around a bird too early, we would be risking a chance of making it bird-shy at a very young age. When working with young pointing breeds, try not to use a verbal command during the first few steps of whoa training. Period. 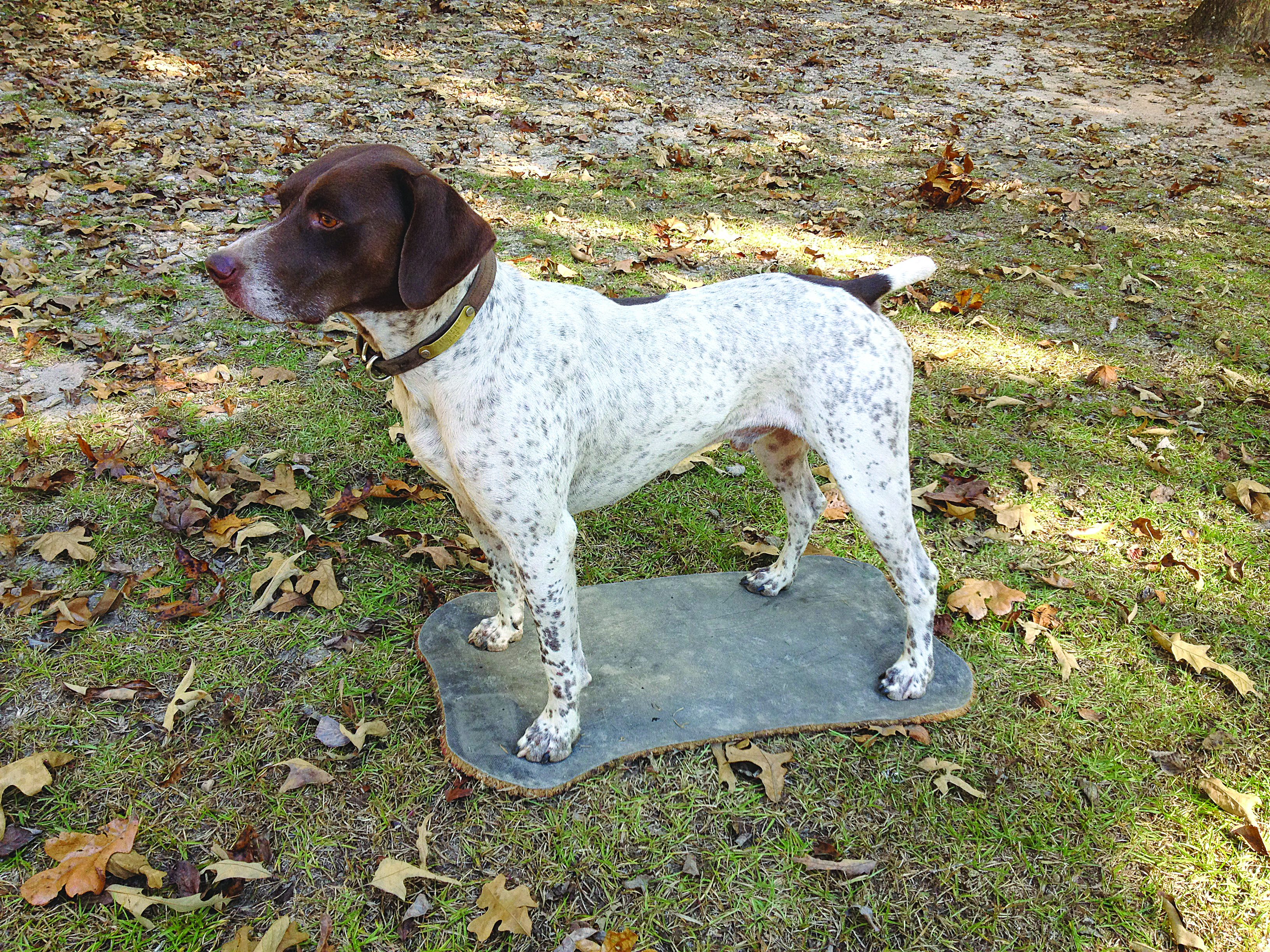 This photo was taken by Ben Busby.

Start out with the pups as young as eight weeks. Place them up on a table and pet them while getting them familiar with standing still for 10 seconds to one minute at a time. As the puppies increase the time of standing still, we can treat them occasionally while they remain still. We are trying to make the pups realize that standing still is enjoyable.

By 16 weeks, we can begin to move the exercise to a barrel turned on its side. I prefer to hang the barrel on its side a few inches above the ground during this exercise. By doing this exercise on the side of a barrel, the dog is learning that when it moves it will cause the barrel to slightly rock and it is uncomfortable to the dog.

You can allow the dog fall off the barrel so his feet are on the ground. What we are teaching the dog at this point is that standing still is more satisfying than moving. At this point, we still do not want to use the word “Whoa.” We are petting the dog, giving him treats, and handling him.

We rub the sides and tail of the dog to build a comfort zone for it. This small piece of training will pay off later when we are doing bird work and we need to correct the dog. Most dogs that are on point are focused on the bird. Therefore, when you touch the dog it will usually break point.

If we perform the exercise that we previously talked about, we can touch the dog all over while it’s on point and nothing will happen. The dog should hold point until it’s given the release command.

The next step is to introduce the word “Whoa.”

“It doesn’t take a lot of pressure to remind a dog to stay on the mat.”

I use a “whoa mat.” This could be a doormat or anything that is approximately the width/length of the dog’s legs. The mat makes a safe zone for the dog. The mindset of the dog is it thinks as long as all four feet stay on the mat it will remain safe. Keep a check cord on the dog the entire time so if he tries to break you can catch him.

If the dog tries to move or run, simply pick him up and place him back at the original point, then go back to petting him and saying “Whoa.” After a few sessions on the whoa mat, you can introduce some pressure in the form of making the check cord into a half-hitch around the dog’s flank. Some trainers refer to this as a suitcase.

Do this by attaching the check cord to the D-ring on the dog’s collar, then run it back under the dog’s belly and tie a slipknot over the back hips of the dog. When you tug on the handle, the loop tightens around the flank of the dog. It doesn’t take a lot of pressure to remind a dog to stay on the mat.

Once the dog has mastered “whoa” on the barrel and mat, and you feel confident in him, you can now begin to move around the yard.

When walking the dog and the check cord is still attached, command “whoa” at intervals. If he doesn’t stop on command, a quick tug on the check cord will remind him. This meticulous process sets the stage for transitioning to the more serious whoa work.

In due time, we will introduce an electronic collar to reinforce the “whoa” command. The goal we are striving for is to guarantee our dog will not break under any circumstances.