With all the time and effort that we as wildlife managers put into conserving and protecting the game animals we love to hunt, we hate to see predators play a large role in affecting population numbers. Predators play an important part in the food chain and are needed for balance, but without trimming predator populations, they can make a significant impact on the populations of deer, elk, turkey and other animals we love to pursue.

The reintroduction and protection of wolves in parts of some north states is a good example. Wolves have had a significant impact on large game numbers. The problem is still growing in some areas.

While the average hunter may never deal with a predator as large as a wolf, almost all of us have smaller predators to manage. With more coyotes around, these predators catch the blame for many issues facing small game and especially whitetail fawn recruitment.

Like it or not, the song dogs are here to stay along with bobcats, foxes, raccoons and other small predators. You can kill as many as possible on your piece of property and definitely “help the cause” when it comes to protecting game, but predators will always be around. The key to trimming predator populations is removal at the ideal time of year to have the biggest impact.

The argument has been made that you need a few coyotes around to keep the other small predators in check and some research supports this claim. However, no one likes the idea of coyotes playing a significant role in managing their deer herd for them. While coyotes may not have a major impact on the overall deer population of a given county or state, they can definitely affect small pockets – and that might be your property! Let’s look at a few things that can be done to increase fawn survival rates.

One of the most effective ways of trimming predator populations from a property is through an intense trapping program. What many people don’t realize is that the fawning season also lines up when many coyote pups are born. Fawns are not only a favorite meal for coyotes, but they are also eating more at this time of year in order to feed a litter of pups.

Although trapping seasons vary on a state-to-state basis, the most effective time to remove coyotes through trapping is immediately before the peak in fawning activity for that piece of property. Removing 70 percent of coyotes at the peak of fawning season can dramatically increase fawn recruitment rates. Recent studies have shown where recruitment rates were increased 150 to 215 percent on land where the majority of coyotes were removed at peak fawning time.

If there ever was a case to keep buck-to-doe ratios in check, this may be as important as any of them. Land managed for a 1:1 ratio of bucks to does has a fawn drop that will happen all within about a 2-week period. This means all the fawns hit the ground at almost the same time, making it much harder for predators to negatively affect the recruitment rate of that property. When buck-to-doe ratios are more skewed, more in the 7:1 range for example, the fawn drop is much more spread out and predators such as coyotes have a much better chance of negatively impacting overall fawn survival numbers.

Coyotes and other predators can also suppress an already low number of deer from rebounding from natural die off or abused doe harvest. A section of Alabama that I grew up hunting was hit pretty hard about nine years ago by EHD (epizootic hemorrhagic disease). Overall population of deer in this area went down 50 to 70 percent. This massive hit to the population along with a very liberal doe harvest had numbers as low as the area had probably seen since the 1960s.

The area still seems to be struggling to rebound anywhere close to previous numbers. I believe the low quality fawning habitat, liberal doe harvest rules and an unchecked coyote population is keeping the deer in this area suppressed well below carrying capacity. This same scenario has been played out in several areas that in the past have had plentiful deer numbers. 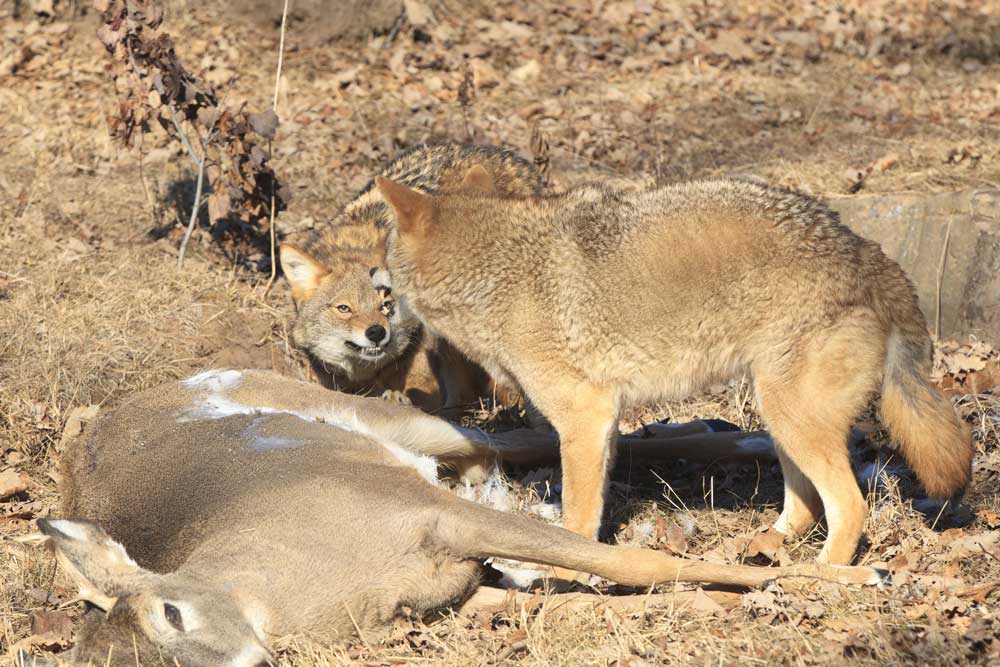 Coyotes will always be around, but wildlife managers can help game by trapping and controlling their numbers. Photo by Austin Delano

Another aspect in trimming predator populations and increasing fawn recruitment rates is providing adequate cover and fawn rearing habitat. Fawns ideally need tall, thick, grassy cover where they can hide until they reach the age to start following their mothers. In a recent study, 65 percent of fawns taken by predators are killed in their first three weeks of life.

“Removing 70 percent of coyotes at the peak of fawning season can dramatically increase fawn recruitment rates.”

Even areas with moderate to high predator populations can have good fawn survival numbers when good fawning cover is present. On the flip side, land that has very poor cover and fawning habitat can be heavily affected by even a moderate to low coyote population.

Creating good fawn cover can be as simple as taking a chainsaw and doing a hinge-cut on a section of timber. The result of getting daylight to the ground in an area previously over shadowed by the thick canopy of leaves is a wealth of new native plants and grasses that will not only serve as great bedding cover, but also provide some food value to whitetails.

Native warm season grasses are another great way to create a positive environment for fawns and mothers. Unused pastures or low quality timber can be removed with heavy equipment to create 2- to 5-acre blocks to be planted in grasses such as switch grass, Indian grass, big bluestem, etc. Once established, the grasses grow very tall and thick. Wind has a hard time penetrating the lower levels where fawns lay. This makes it very difficult for coyotes to be able to systematically hunt down fawns by smell.

These same habitat improvements can also be beneficial in providing brood habitat and cover for turkey, quail and other birds or small game. When you look at the number of predators that are opportunistic feeders of eggs, it’s a wonder a hen turkey ever has a successful nest hatch.

However, even in my own management work, I have seen turkey and quail number respond very positively to a nest predator trapping program in late winter just prior to the spring nesting season. I have seen arguments made that trapping yields no measurable increases in small game numbers. However, I attribute those claims to properties where the trapping was too short lived, on too small a property for sample size, not intense, at the wrong time of year or with game numbers not correctly monitored.

“I have seen turkey and quail number respond very positively to a nest predator trapping program in late winter just prior to the spring nesting season.”

When trimming predator populations keep nest predators in mind, such as raccoons, opossums, armadillos and skunks, are relatively easy to trap and the manager of smaller acreages can see results in an intense trapping program because of their relatively small home range compared to coyotes. A very recent study done on nest predator trapping for waterfowl over large acreage tracts in Canada showed great success rates. In multiple control areas, waterfowl nest success was less than one nest in 100. In adjacent blocks that were intensely trapped for nest predators, four nests in 10 successfully hatched. 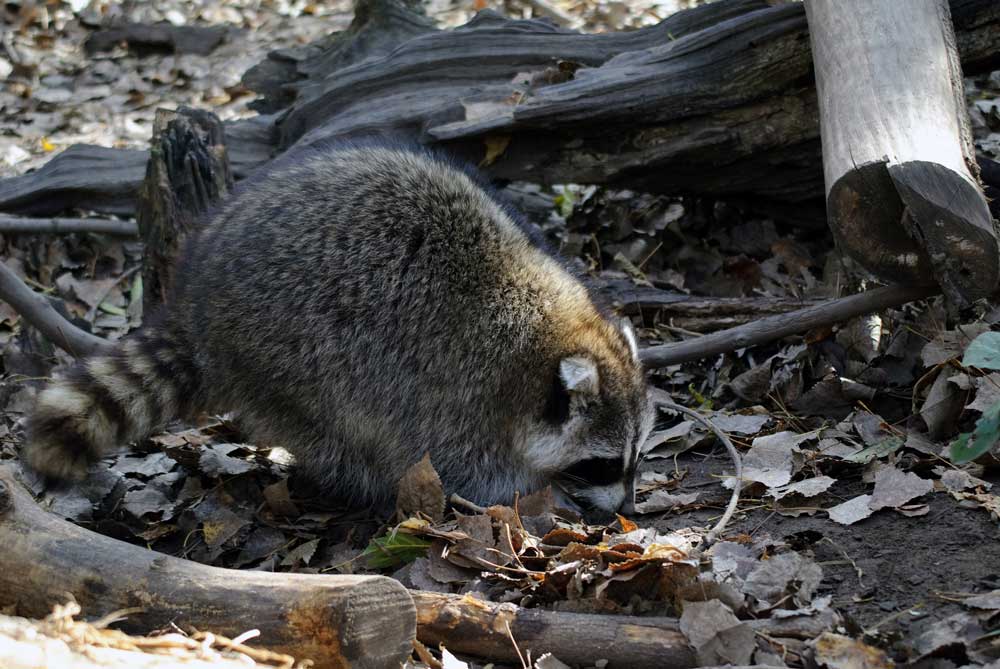 Raccoons and other varmints are tough on turkey nests. Heavy trapping before nesting season can make a positive impact on poult survival very quickly. Photo by Austin Delano

We will always be making efforts for trimming predator populations. Predators play an important role in the prey-predator relationship. Hunting and trapping can certainly have a positive outcome for a short period of time, but you are never going to completely rid yourself of coyotes or other predators. If you manage a piece of property and identify predators as being the primary cause for a decrease in harvest opportunities, low fawn recruitment or poor upland bird nest success, look at implementing an intense trapping program as well as improving habitat that gives game their best chance at survival.

In the circle of life, predators have their place and I’m certainly glad because they are so enjoyable to hunt and trap. However, we as humans being the top of the food chain shouldn’t like the idea that these varmints may be undermining our management efforts.