You can catch big bass in the cold of winter if you are prepared.

As November brought us cooler weather, it sent many to the woods in pursuit of Joe Buck or they hit the duck blinds with their trusted retriever Ol’ Yeller.

Avid anglers know this also signals the start of some of the best winter bass fishing on area lakes.

Here are some helpful tips for a great day on the lake.

Despite the difficult weather conditions, anglers can still manage to spend quality time on the water through the winter days of the year, catching fish on a variety of lures.

“Bright sunny days can raise water temps by as much as five degrees in just a couple of hours, which triggers feeding binges.”

First, when winter bass fishing, anglers should dress for the conditions and always wear PFD. Secondly, emphasizing a slow approach for just about every presentation is still an understatement; when you think you are fishing slow, slow down.

Let’s set the stage: in November, water temperatures begin to drop and should continue to drop through mid-February with some area lakes dropping to the mid- to upper-thirties over the winter.

Bass become more lethargic to conserve energy. Bright sunny days can raise water temps by as much as five degrees in just a couple of hours, which triggers feeding binges.

While I’m a firm believer that anytime on the water is a good time, if your time is limited then plan your trips around weather changes.

The best days for winter bass fishing are normally any unseasonably warm day during the winter, but fishing before a cold front or any other weather change can also be productive. You’ll find me fishing with water temps as low as 38 degrees.

I’ll start a typical day searching for fish to react to a jerkbait bite. This pattern is a fairly steady, wintertime presentation that can produce quality fish in adequate numbers. Later in the day, about 11 a.m., I will go with a rattletrap. The trap works really well for winter bass fishing and you can work them now in late afternoon, provided the water has warmed up some.

Proper presentation is everything. As it gets colder, I’ll start a typical day with a four or five count—that’s one thousand one, one thousand two, and so forth—before you jerk it again. Sometimes it may not even be a jerk, just turning the handle of the reel and pausing it again. It’s something you have to play with.

The colder the water temperature, the longer the pause needs to be. If it’s really cold, you have to make a cast and crank the bait down, put down the rod and drink a cup of coffee before you move it.
I recommend using a variety of jerkbaits to reach different depths when winter bass fishing. Ideally, the lure reaches a depth at the top of the grass left over from the summer. I’ll keep about four rods rigged up with different baits designed to reach a different depth, one to three feet, four to six, six to eight, and maybe one deeper. 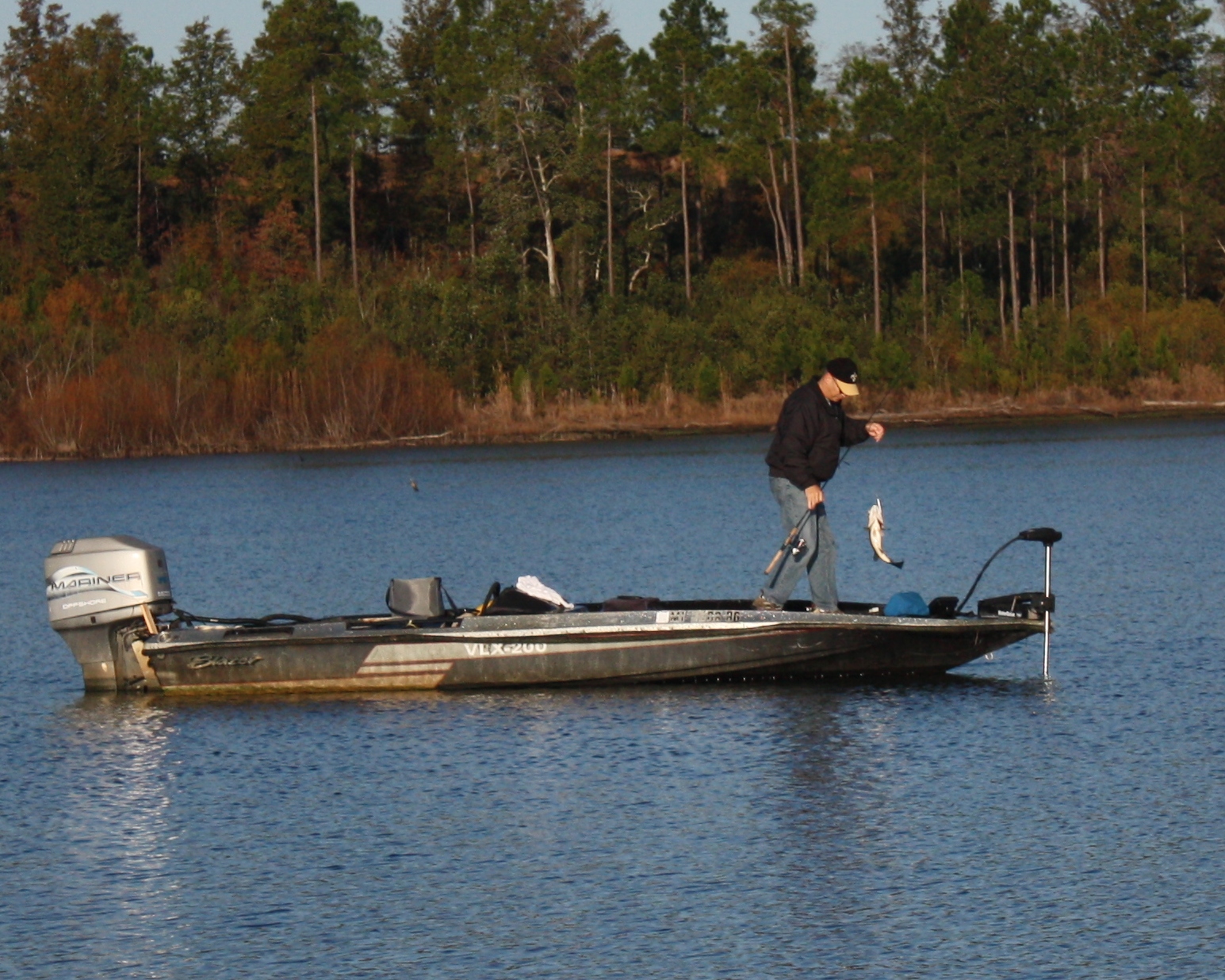 It may take searching to locate winter bass, but they will bite. This photo was taken by Captain Jake Davis.

I highly recommend utilizing a sensitive rod such as Duckett Terex rods for most of your applications, normally spooling a LEW’s 6.4-1 with 10- or 12-lb.

Vicious Ultimate Copolymer, occasionally dropping to eight-pound line when the fish are finicky. I favor a six-foot, nine-inch or a seven-foot medium-heavy rod with a fast tip for jerkbaits. With this setup, I’m slowing the jerkbait down and stopping it.

With this particular rod, I can actually feel the line tighten up when a fish hits. The rod is really special. With 12 eyes on it, I can get a little extra casting distance with it, probably as much as 25 feet compared to the rods I’ve used.
I’ll use jerkbaits in colors ranging from sexy shad in clear water to clown in dirty water. In between I’ll throw a variety of natural colors. You need a slow, patient approach, but the fish will hit.

If the water warms up or if the fish prove they will chase a lure, I would actually rather see my clients throw a Rat-L-Trap. They are simply easier for the average fishermen to use. I find the trap bite in many of the same places we might have fished a jerkbait earlier in the day.

The difference is these fish are more active and thus more willing to pursue a moving bait.
The Rat-L-Trap has got to tick the grass. Count it down until it’s ticking the grass and then rip it loose. In late winter you can catch fish by burning it across a point or across the top of the grass.

As the water warms up, the fish totally commit to the prespawn area and feed up, put the feed bag on. They are chasing everything. That’s when the water temperature has risen into the upper 40s—48 on up. I’m not saying it has to be that high for the trap to produce, but that temperature has been most productive for me.
For Trap tackle, I use a Duckett rod with a soft enough tip that you don’t take the trap away from the fish. A rod that is too stiff will also result in lost fish after the hook-set.
I’m using anything from 12-lb Ultimate to 65-lb test braid—both made by Vicious Fishing—depending on what we are throwing it in and around.

They will still hit it even when using braid. When winter bass fishing, a key point is a rod with a fast tip that is still limber enough but with enough backbone to get the hook set.
I’ll normally start trap-fishing with an X-Caliber Xr50 or Xr75. If the fish don’t respond to the bigger baits, I have experienced success downsizing to a quarter ounce. What I use depends on the bait in the area. It’s a match-the-hatch scenario.

The smaller bait creates a slower presentation, and a slower fall will trigger a bite at times when nothing else will.
While red traps are used extensively on Tennessee River impoundments such as Guntersville, I also like royal purple and sexy shad. I’ve also experienced great success with gold with a black back. 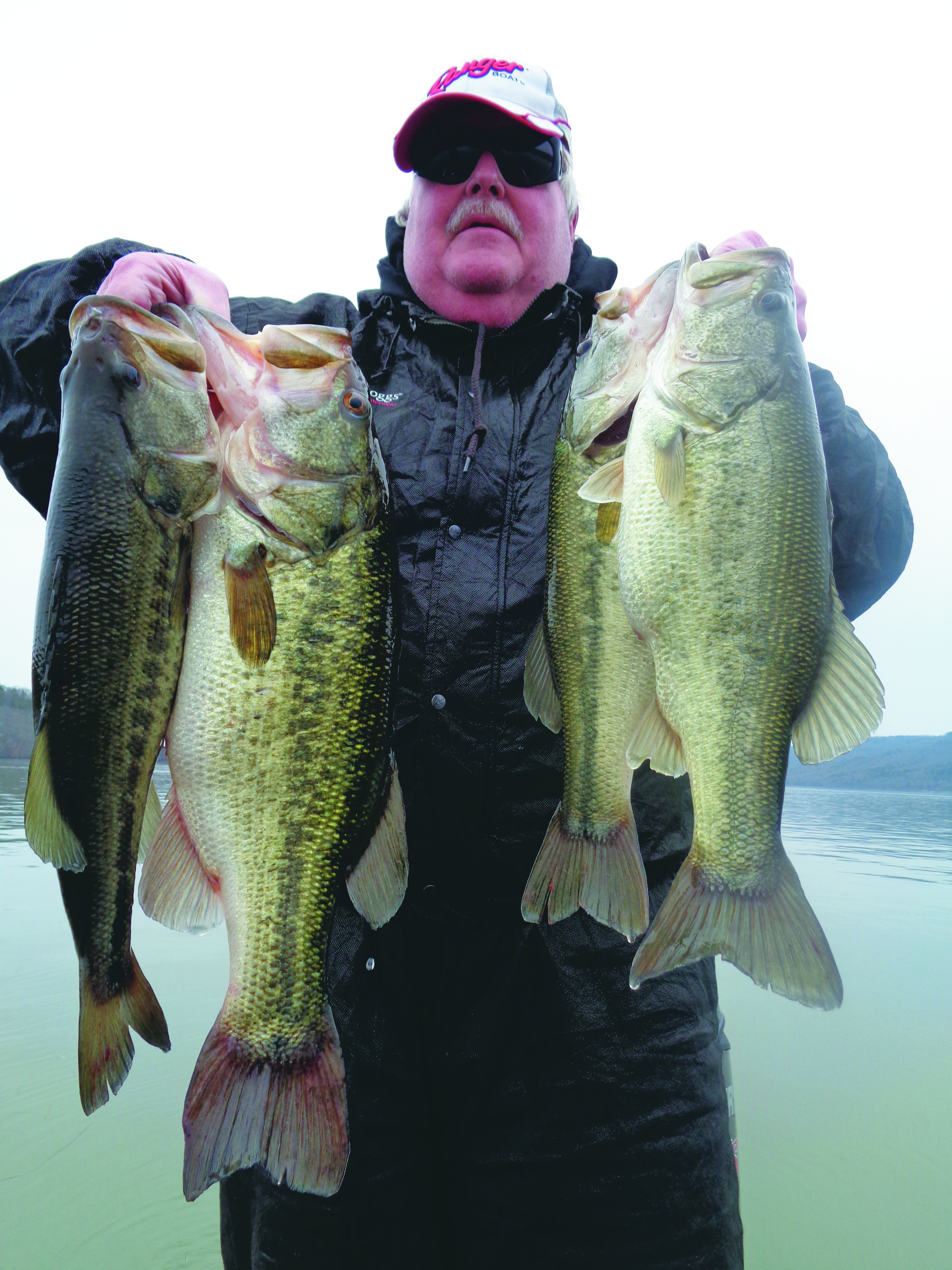 If fish don’t respond to hard baits, then it’s time to revert to plastics or a jig. I’ll Texas rig or Carolina rig a lizard or Tomahawk 8.75 worm from Missile Baits.

“The jig is particularly effective around deeper docks.”

The other thing I do is pick up a 1/2-oz. Tightline football-head jig in the Guntersville Special, which is green pumpkin with some black and blue mixed in, or a Green Pumpkin Orange with a Turbo Tail Grub trailer from Missile Baits.

The jig is particularly effective around deeper docks. I’ll fish the perimeter posts first and flips underneath on sunny days.
Slow that fall down and fish your Texas rigs with a 1/4-oz. tungsten weight. That’s where a lot of guys miss it here. They forget to slow down their presentation. Fish it slow, and then slow down some more.

Be prepared to throw any of the previously-mentioned lures as the bite changes frequently in the winter months. As far as location is concerned, I’ll spend a good bit of my time fishing the many large tributaries that feed the area lakes.

Tip #5: They’re Not All in Deep Water

One final suggestion about winter bass fishing area lakes is don’t ignore shallow water, especially if the priority is simply getting a bite. The bigger fish might hold in slightly deeper water, but there are fish in skinny water year-round on the lake.
Generally, we’re targeting shallower grass in four to 10 feet of water. It’s a classic pattern with one caveat. You can catch bass 365 days a year on most area lakes in only a foot of water. You can always find shallow fish if you try hard enough.
If you’re after big trophy fish, then put the boat in 12 feet of water and cast to four-feet of water.
Again, please use extreme caution when winter bass fishing. I suggest dressing for the worst and always wear a lifejacket at all times.