When everything comes together, and the stars align, the dedicated waterfowler gets to reap the benefits. If you’re not a duck hunter, you really can’t imagine the splendor and wonder of a perfect duck-hunting day. However, if you are a duck hunter, you know these days are few and far between in Alabama.

Alabama is within the Mississippi Flyway, but just barely. The number of ducks that peel off the flyway can be accurately described as a sliver. Sometimes the numbers of ducks we get are substantial, and some years, the lack of ducks leaves duck hunters scratching their heads as to why they work so hard for so little reward.

The U.S. Fish and Wildlife Service did duck hunters a huge favor when they increased the allowable wood duck bag from two to three, per hunter, per day. An increase of only one extra duck per day might not seem so generous, but to duck hunters, it was well appreciated. With two or more hunters participating, the extension of the hunt by a third duck makes for many wonderful mornings.

The Mobile/Tensaw Delta is an ideal habitat for wood ducks. In addition to the plentiful native population, the Delta is home to a large group of migrating wood ducks during the winter.

“Scouting plays a key role in knowing where the wood ducks are feeding and loafing.”

The Delta combines security and lots of food to lure ducks there in winter. Multitudes of oak trees drop acorns throughout the Delta, offering the wood ducks an almost inexhaustible supply. The wood ducks gorge themselves on the acorn crop, sometimes letting their guard down, allowing hunters a great opportunity to harvest the ducks.

When the migration of wood ducks arrives, the creeks and bayous can start to bulge with the birds overnight. Keeping tabs on the new arrivals can mean exciting duck hunting action that stirs the soul of even the most veteran of hunters. Scouting plays a key role in knowing where the wood ducks are feeding and loafing.

It pays to have a little experience when targeting the abundant wood ducks of the Delta. Lee Minto of West Mobile has been hunting the Mobile/Tensaw Delta since his father introduced him to it some 40-plus years ago. Using that knowledge to his advantage, Minto has learned to fall back on the wood ducks when things get lean in the Lower Delta.

“I primarily hunt the Lower Delta near the Causeway,” Minto says. “I like to hunt the shallow, grass-filled bays targeting gadwalls, widgeon, pintails and mottled ducks. The problem is that the area receives a tremendous amount of pressure. That pressure usually results in the ducks leaving the area.”

When ducks leave the Lower Delta, hunters wishing for action must find numbers of duck to hunt elsewhere. One of those places is the Upper Delta.

When it comes to hunting wood ducks in the wooded areas of the Delta, there are several factors that can make or break a hunt. Minto gives a few tips.

“What I look for is a less-traveled creek that allows the ducks to build in numbers,” Minto explains. “With so many bass fishermen and hog hunters traveling the Delta in milder weather, finding a less pressured creek is a must.”

Another thing Minto believes that may help is lower water in the Delta.

“High water is your enemy when duck hunting in the Mobile Delta,” he says. “When the water is high, it allows the ducks to spread out in the flooded timber, most of which is tough getting through. It’s always better when the water is lower, which concentrates the ducks.” 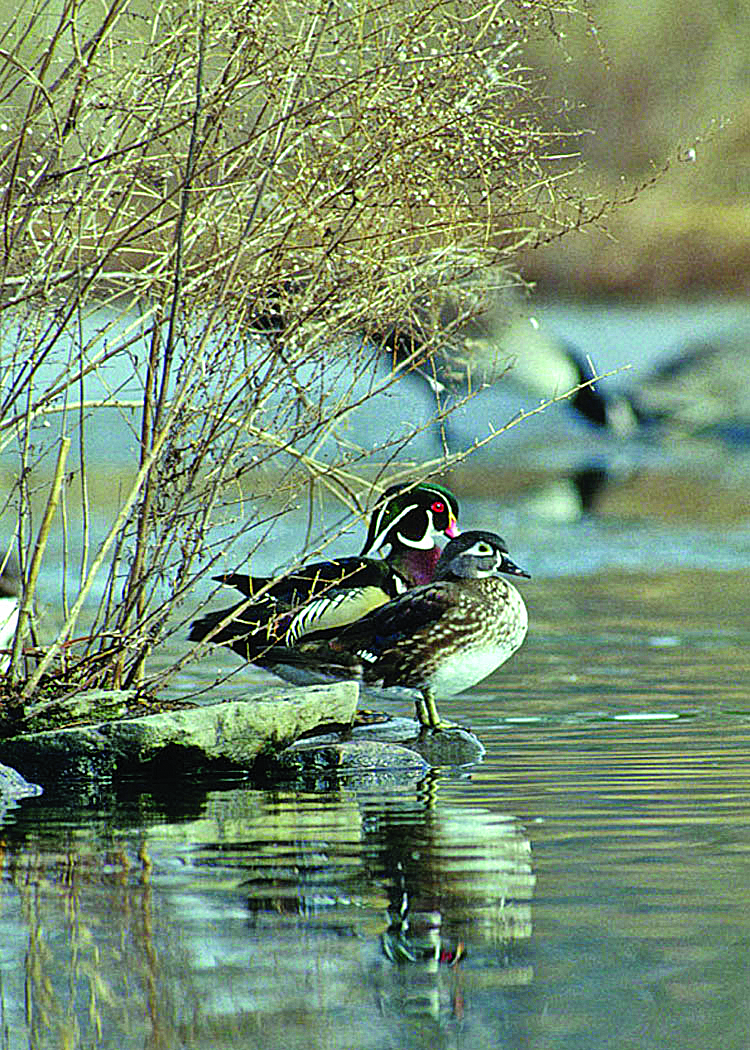 This photo was provided by Mike Thompson.

Minto has learned a lot over the years when it comes to setting up for the wily wood ducks. Some of the simplest things make a world of difference.

“I like to get set up on a bend of a creek,” Minto adds. “I also like to set up in the bottom of the ‘U’ of the bend. I don’t normally put out more than eight or nine decoys. I’ve killed plenty of woodies using mallard decoys, but I do think using wood duck decoys is a plus. In fact, I was convinced of this when my hunting partner, Mike John, brought along some wood duck decoys. When the woodies came into the spread, most of them went straight for the wood duck decoys and landed.”

Another factor in picking a spot to hunt is visibility.

“Try and pick out a spot that gives you some blue sky above it, Minto warns. “The wood ducks are dark, and without some lighted background, they’re hard to pick out in time to take a shot. At least half of the ducks you see will be flying the creek in early morning and won’t actually light in the decoys. Being ready to shoot passing birds is a must.”

“Wood ducks are not the only ducks you will encounter while duck hunting in the Mobile Delta,” Minto says.  “Over the past several years, we have been seeing a lot of green-winged teal. We also see the occasional mallard or gadwall.”

While decoys are the most important tool (besides your shotgun) in hunting wood ducks, according to Minto, a good wood duck squeal call will help.

“Several years back, my brother Jack and I were hunting a creek and could hear ducks around the bend. The wood duck can be quite vocal, so I pulled out my wood duck call and started squealing with it. We were amazed that the ducks heard it and came flying around the curve where we gave them a big surprise. It happened more than once that morning, so I’m sure it worked.”

While it doesn’t happen very often, a hard freeze can be the answer to the Delta duck hunter’s prayers.

“If you get a good freeze period of two days or more, all the backwaters freeze,” Minto remarks.  “That locks up the acorns in ice, and the ducks are forced out to moving water to pick up the acorns there. Last year was a perfect example. We had our best hunting when things were iced up.”

During December and January, the rivers can swell outside their banks. The rainfall received upstate not only puts a lot of water in the Delta, but it also puts lots of floating debris in the water. Be sure to use a strong spotlight to detect these hazards while running the rivers.

It can’t be stressed enough about wearing a life jacket when hunting ducks from a boat. It seems that every few years a duck hunter loses his life in a boating accident in south Alabama. Don’t let that be you! Wear your life jacket anytime you are near the water.

Engine problems can arise, and if you are not prepared, you can be in for a miserable time while waiting for help. Carry along some canned food, such as Beanie Weenies or Vienna Sausages as a precaution. They will taste like rib eye steak if you are stranded for very long.

Finally, it’s always good to carry along some dry clothing as another extra if someone takes an unexpected dip. Hypothermia can set in quickly. It just makes sense to bring along the emergency duds.

South Alabama duck hunters have a great location to target the bodaciously attractive wood ducks. When things get tough, it’s a great destination for wing shooting. See you in the blind.