Offshore yellowfin tuna fishing is better than good along the northern Gulf Coast.

There are more Fish in the Gulf than Red Snapper

A great many anglers who think about running offshore and into the deep blue waters of the Gulf see red- red snapper that is.  There’s no argument about the fun and great eating that results from a long-distance snapper trip, but there’s a big problem with thinking only red.  We can only go offshore for the big red snapper for a very limited number of days, and those days tend to run out very fast- and those days are never in late fall.

So, anglers who love the open waters of the Gulf must find other kinds of fish to catch, and that is the solution to the problem.

When anglers reach the true-blue water of the Gulf, several miles out of port and away from the congestion of passes and state waters reefs and wrecks, the world opens up as far as fishing targets.

For those who like to troll in search of big hard-pullers, late fall is a great time to encounter some very big, very strong, very fast wahoo.

Both blackfin and yellowfin tuna are found around the offshore gas rigs, and anglers who are equipped to deal with these powerful, delicious fish can have a blast and can work very hard while they’re having fun.

“When anglers reach the true-blue water of the Gulf, several miles out of port and away from the congestion of passes and state waters reefs and wrecks, the world opens up as far as fishing targets.”

Captain Gary Bryant of Redeye Charters tells us that as the weather of fall cools off, the big hard-pullers tend to come closer to shore.  He says,” They’ll show up on the shelf 50-70 miles out. As fall goes on, there’s a better chance of getting into wahoo- 35 to 70-pound fish are commonly caught.”

And then there’s the deep, deep dropping.  Anglers who are properly set up with the right equipment can come home with some of the very best eating fish in the Gulf- fish that are not commonly encountered by anglers. Yellow edge and snowy grouper, tilefish, beeliners, and long tail seabass are caught by anglers who send baits far down to the cold, clear water of the deep Gulf bottom and use electric reels and heavy rods to bring these delicious fish to the boat. The one thing that is consistent about these deep-water fish- they are all prime table fare.

So, even though we can’t keep the big red snapper of the deep blue water now that it’s fall, there are plenty of other fish in the sea.

How They are Caught

Now, when we go far offshore to seek out yellowfin tuna or wahoo or the various deep-drop caught fish, the equipment is crucial.

Yellowfin tuna and wahoo will be around the gas rigs looking for food, and anglers who pull deep-diving plugs will likely encounter these tough characters. Captain Gary Bryant recommends crankbait type lures that run at least 20 feet deep. These big wobbling plugs can be pulled at around six knots effectively- any faster and they don’t usually run true.

Reels that hold 400 yards of 80 lb. braided main line with a 100-lb. wire leader will work fine for trolling after the wahoo.

Chunking live bait or cut-up bait can produce fast and furious action when these tuna have been located. Captain Gary tells us that these late fall tuna are big.  The yellowfins will be in the 50 to 100-pound class commonly, but it’s not a rare thing to encounter yellowfins considerably bigger and stronger.

The yellowfin tuna come to the chum chunks as they sink in the clear blue water, and they take chunks of bait on hooks readily. Although the initial chumming with chunks of fish is not too particular as to the nature of the chum, when the tuna show up and start to rip through the chum line, Captain Gary prefers to give the big yellowfin some “red meat”.  Chunks of cut bonito or blackfin tuna are used to hide the hook and then drifted back in the chum line. When a big yellowfin takes a chunk bait, the angler needs to have a good grip on the rod, and a good fighting belt is very helpful too. Some patience will also be required. These open Gulf tuna are extremely strong fish, and they don’t quit pulling until they are totally whipped down. Yellowfin tuna fishing is an endurance contest, but it is so much fun.

Anglers need to use 80 to 100 lb. braid main line for chunking yellowfins, and as much as twenty feet of 80 lb. fluorocarbon leader may be needed if the water is very clear and the tuna are line shy. 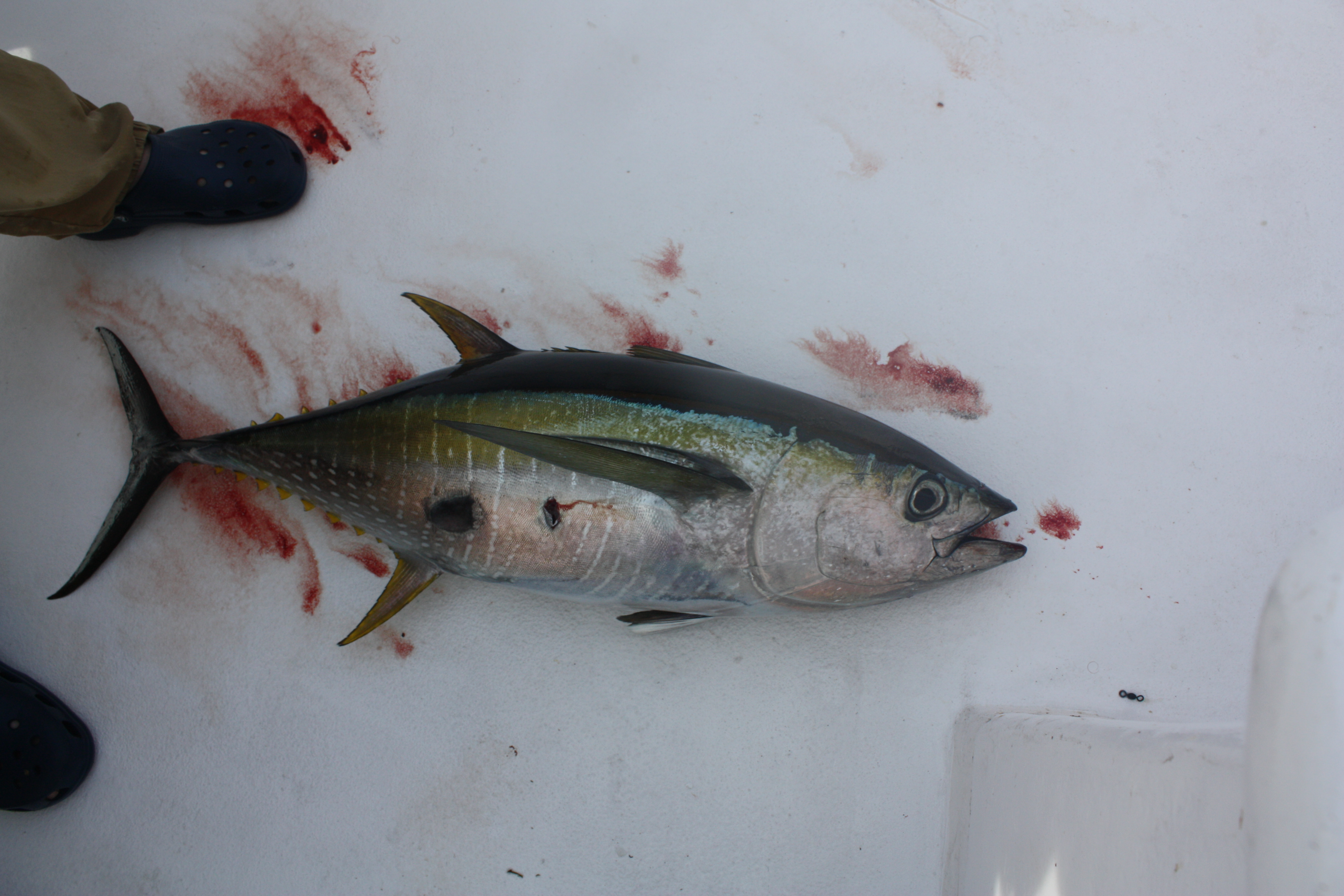 Captain Gary Bryant likes to use Shimano 50 wide reels for the chunking operation- these reels have proven themselves to be up to the hard work of fighting big yellowfins.

Captain Gary says,” This fall yellowfin tuna fishing is kind of a run and gun fishery.  We keep moving until we find them. If they’re there, it won’t take long to find them, if they’re not there, move on to somewhere else.”

For deep dropping- this is a very specialized kind of fishing, and this is a situation where booking a charter trip is a very good idea. On deep drop trips, anglers will commonly run out 60 miles or so and send heavy weighted baits down to rocks and coral structure where some fine fish will be found.

Captain Gary has experimented with various rig setups, and the most effective rig he’s found uses a 5-lb. lead weight to take a three-drop, three hook bottom rig to the deep, dark water.  Captain Gary says, ” We’ve found that we catch most of our deep-drop fish on hooks close to the bottom – no matter how many hooks we’ve tried above on the rig, the bottom two catch the fish.”

Deep dropping is usually done in water from 500 to 1,200 feet.   Electric reels and the power setup to operate them is a very refined and expensive way to fish, and most private boat owners won’t have the right set up for this kind of fishing. On the charter boats, the equipment is there, and most importantly, the knowledge of the skipper and crew is there.  Trying to locate good deep dropping waters without professional help is a hard task- there’s a lot of water and a lot of bottom out there.

And trying to use standard boat reels and rods to deep drop?  Imagine having to reel up by hand several hundred feet of line with heavy weights, baits- and hopefully, some big fish hooked up. I believe I’ll pass on this kind of fishing- too much like work, very hard work.

As late fall turns into winter, we get out of hurricane season, and that’s a very good thing. With the big storms not as much of a consideration, anglers can plan long-distance blue water trips with a lot more certainty and a bit less concern for the weather.

In fact, the weather tends to get very nice in late fall and early winter, and as the heat of summer gives way to the cooler but not chilly air temperatures, anglers can be a lot more comfortable than during the brutally hot days of full summer.

And since school has started and there are not nearly so many folks on the coast, there are fewer boats on the water and a lot less competition for good fishing spots. And the cooler weather and water not only is nice for the anglers, the big pelagic fish, which are the targets for most offshore blue water trips in fall, come in a bit closer and easier to reach.

As Captain Gary Bryant says,” Bluewater fishing in fall offers anglers great opportunity to hook some of the biggest fish out there.  There’s a good chance anglers can catch the fish of a lifetime in fall.”