Comparing the 350 Legend Ballistics in a Modern Sporting Rifle

Comparing the 350 Legend Ballistics in a Modern Sporting Rifle

Long has the 450 Bushmaster been king of the straight-wall calibers. But there’s a new contender in town, the 350 Legend, and it might just be tough enough to dethrone the 450. When comparing the 350 legend vs 450 bushmaster, it could even be a better option for ballistics in a modern sporting rifles, depending on specific consumer needs.

350 legend vs 450 bushmaster: Ballistics at a Glance

To better understand these calibers, we analyzed the ballistics of each. Generally, with a 250-grain bullet, the 450 Bushmaster sports an approximate 2,200-fps muzzle velocity, 2,675 foot-pounds of energy out of the barrel and drops 4-5 inches between 100 and 200 yards.

While the 350 doesn’t have as much muscle as its older brother, it’s impressive, and still wins in certain categories. Usually, with a 150-grain bullet, it storms out of the barrel at about 2,300 fps, offers around 1,800 foot-pounds of energy, and drops around 5 to 6 inches between 100 and 200 yards.

Overall, the 450 certainly triumphs when it comes to sheer knockdown power. Its heavier payload delivers a higher energy transfer upon impact. That undeniably can make a difference with subpar shot placement. But in my mind, with good shots, that added energy doesn’t outcompete the numerous advantages of the smaller round. 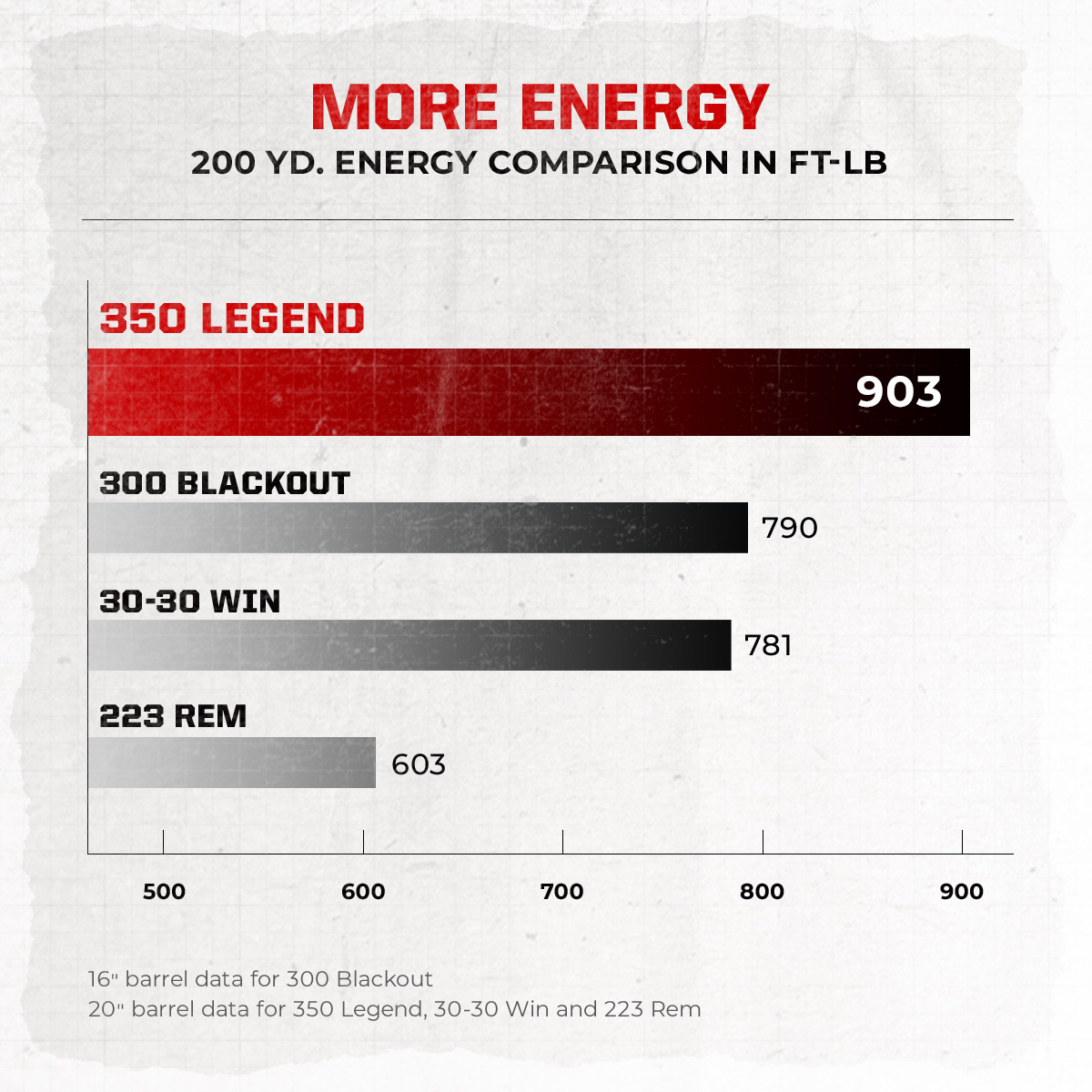 The 350 Legend doesn’t beat out the 450 in terms of energy, but it surpasses several other popular calibers. (Winchester Ammunition graphic)

While it isn’t a large difference, the 350 round drops slower than its older brother. If opting to take longer shots, that can make a difference in whether or not a bullet strikes the vitals, or misses low.

The newer caliber is also much quieter than many calibers on the market. That’s a big plus for anyone looking to do everything in their power to protect their hearing. The 350’s decreased recoil is another added bonus, especially for younger and smaller-framed shooters. 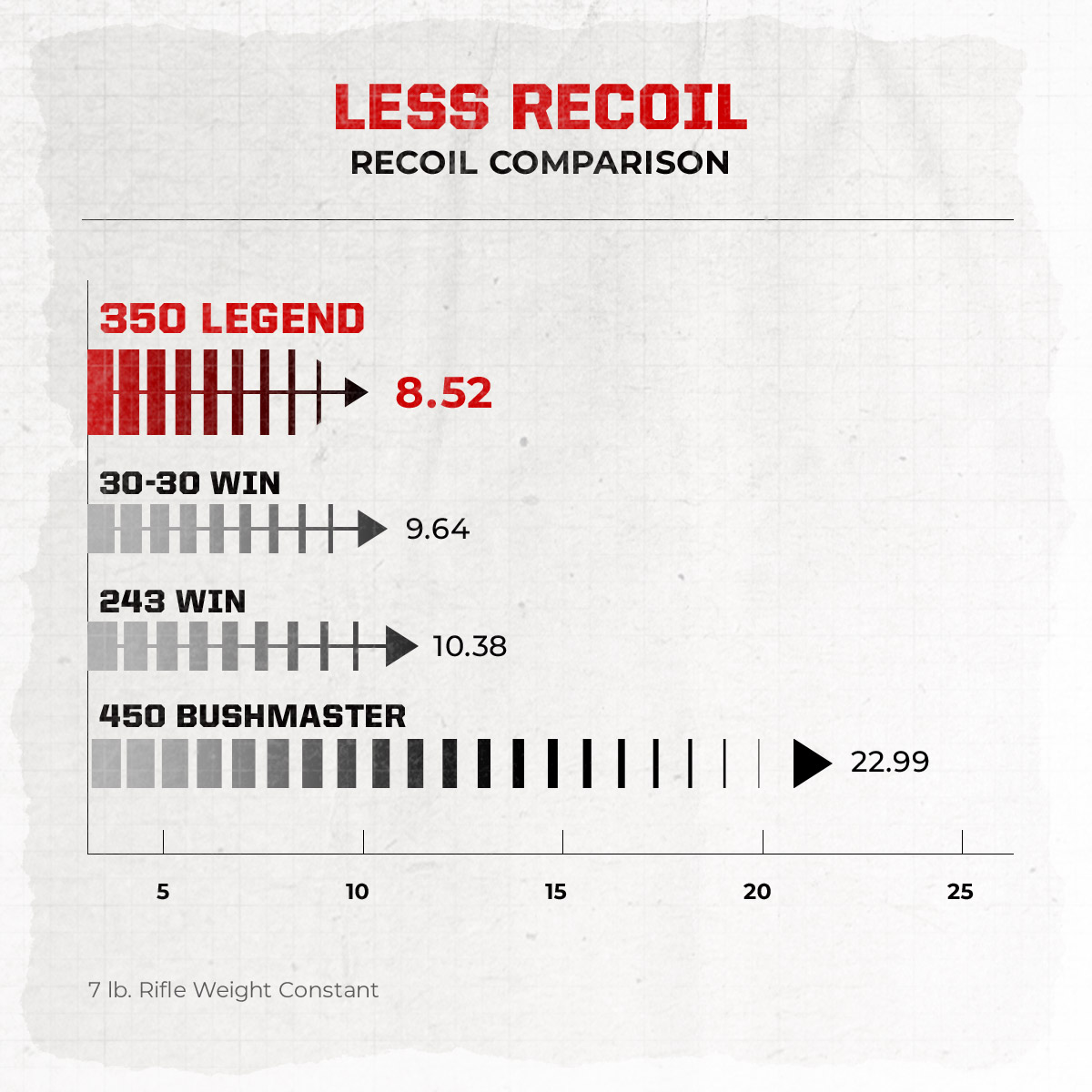 If bullet drop, money, muzzle blast and recoil are important to you, the 350 outperforms the 450. If energy is king, the 450 wins. At the end of the day, determine what’s important to you. 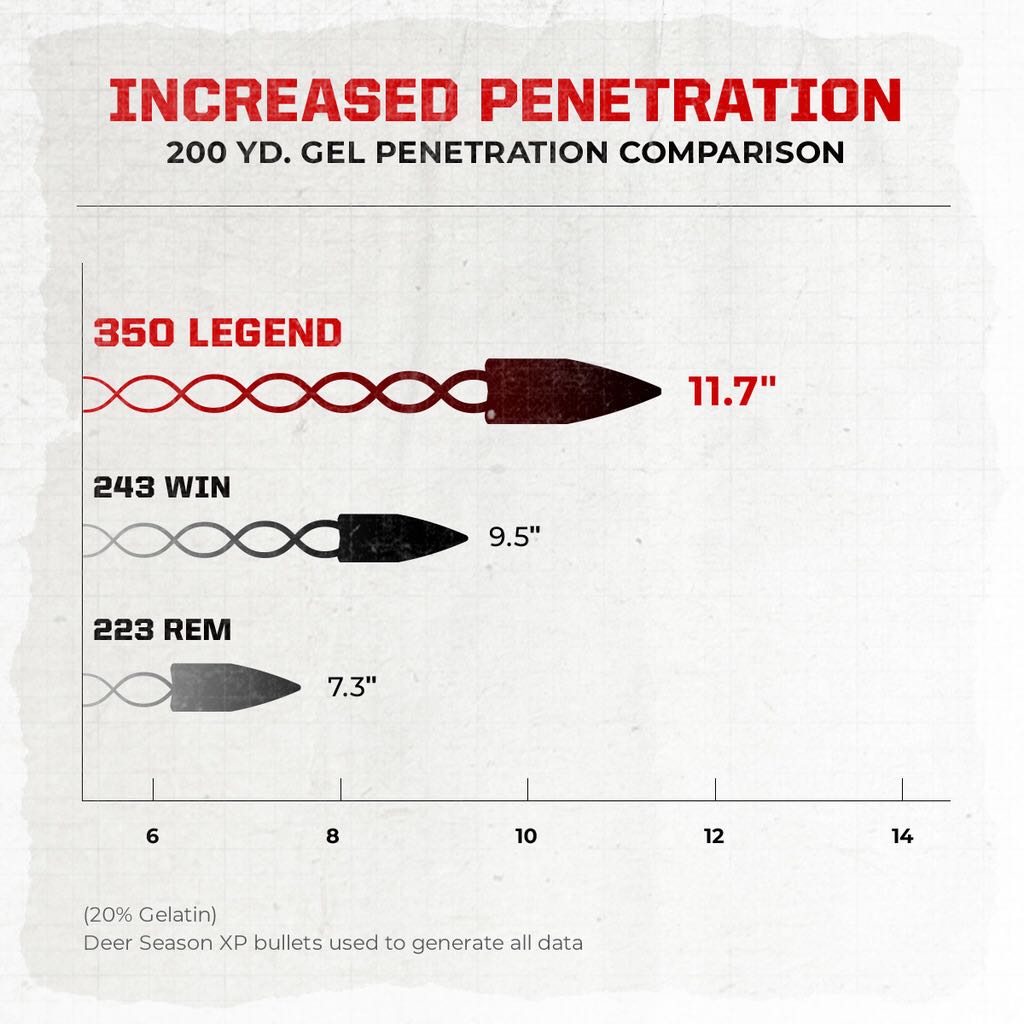 According to some research, the 350 Legend gets better penetration than the .223 Rem. and .243 Win. (Winchester Ammunition graphic)

If leaning toward the 350 Legend, based on ballistics, understand that it also outshines other similar cartridges, especially in the recoil, penetration and energy departments. According to Winchester — the founder of the caliber — it’s the fastest straight-walled hunting cartridge in the world.

We also considered how these calibers would perform as sporting rifles, and consulted with Bay County Armory Founder Sonny Vincent. He has years of federal law enforcement and firearms retail experience behind him. He saw there was a niche in the AR market that wasn’t being filled. That’s when he decided to make a move, and began supplying custom-built ARs to retailers, rather than directly to customers.

Some of his builds are in straight-wall calibers, which is huge for those who hunt in straight-wall-caliber-only states. “Muzzleloaders are fun, but at the end of the day it’s a muzzleloader and they’re dirty and slow,” Vincent says. “Slugs are effective, but not always reliable in accuracy. You can have a great group, take a break, and your next shot is a flyer.”

It also has other advantages. “If you have smaller-framed, inexperienced, or recoil-averse hunters, the 350 Legend is something people are seeking out,” Vincent says. “Your advantage moving from the 450 to the 350 is ammo availability, ammo cost and recoil. In areas where you have dense brush, and areas where your shots are inside 200 yards, I think this is a superior cartridge out of an AR platform.”

Personally, I love the 350 for hunting whitetails. I tagged a great Missouri buck with the caliber last fall. I wasn’t using an AR platform. Instead, it was a traditional bolt-action rifle. Still, the caliber performed well, and I brought home plenty of venison as a result. 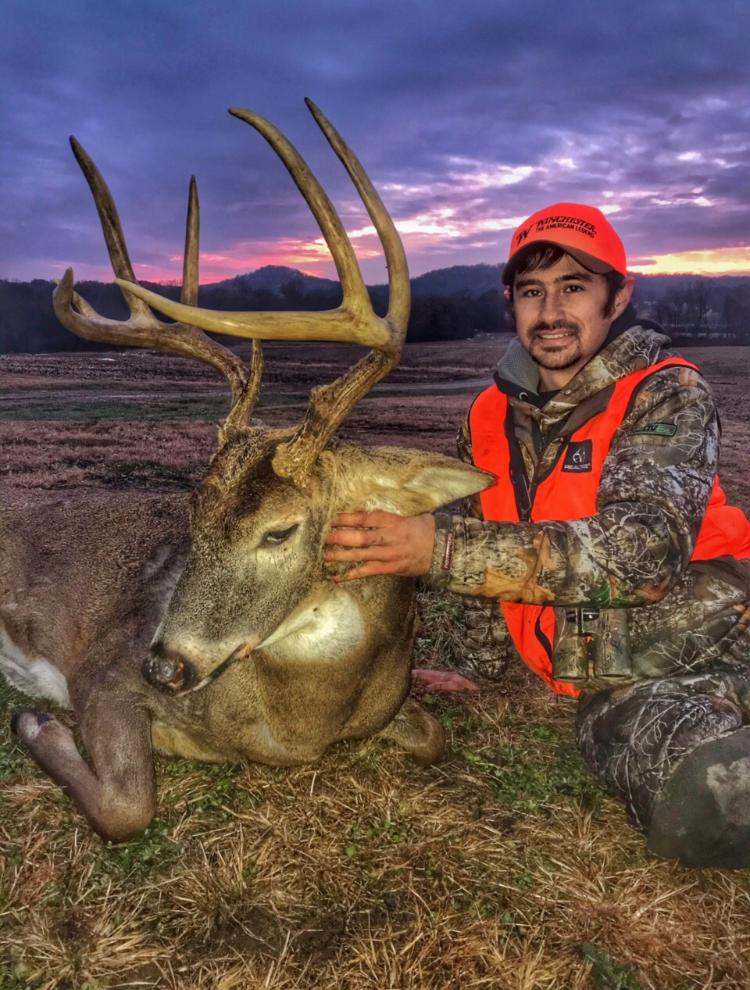 The author, Josh Honeycutt, poses with a great buck he bagged with the 350 Legend caliber.

I spent some time on the range getting to know it, and the next day, went afield with Winchester’s .350 Legend PowerMax Bonded Bullet. No one had ever killed a deer with it yet, and I hoped to be the first.

The first day offered up quite a few deer sightings, including a great buck that didn’t stop for a shot. I never clicked off the safety, though, and dreamed of big deer that night.

The sun rose on the second morning, and I hoped for better luck. I saw a lot of deer early in the day, but not the one I was looking for. Things were destined to change, though.

I climbed down, grabbed a quick lunch, and headed to a different spot that overlooked a standing soybean field. It was surrounded by cover, and I expected deer to emerge from the timber before dark. It didn’t take nearly that long. I was still settling in when an ancient buck pushed a doe out into the open.

I scrambled to get my scope on the buck. I inhaled and exhaled three times. Then hold. The Legend barked, the buck ran, and it dropped just inside the timber. That’s a pretty good story for the grandkids someday. Being the first to ever tag a deer with the new bullet isn’t a bad tale, either.

Stories aside, I greatly prefer the 350 over the 450. It’s cheaper to shoot, has less recoil, offers incredible speed, and comes with numerous other benefits.

“I view my company and the products I build more as sporting rifles than tactical rifles,” Vincent says. “Tactical has been done and everyone produces one. I try to focus on the hunting and sporting market. The 350 Legend falls into that viewpoint, while a .556 might not (it isn’t a superior cartridge for large game). If you’re going to deer hunt with an AR, you need something with a little more energy.” 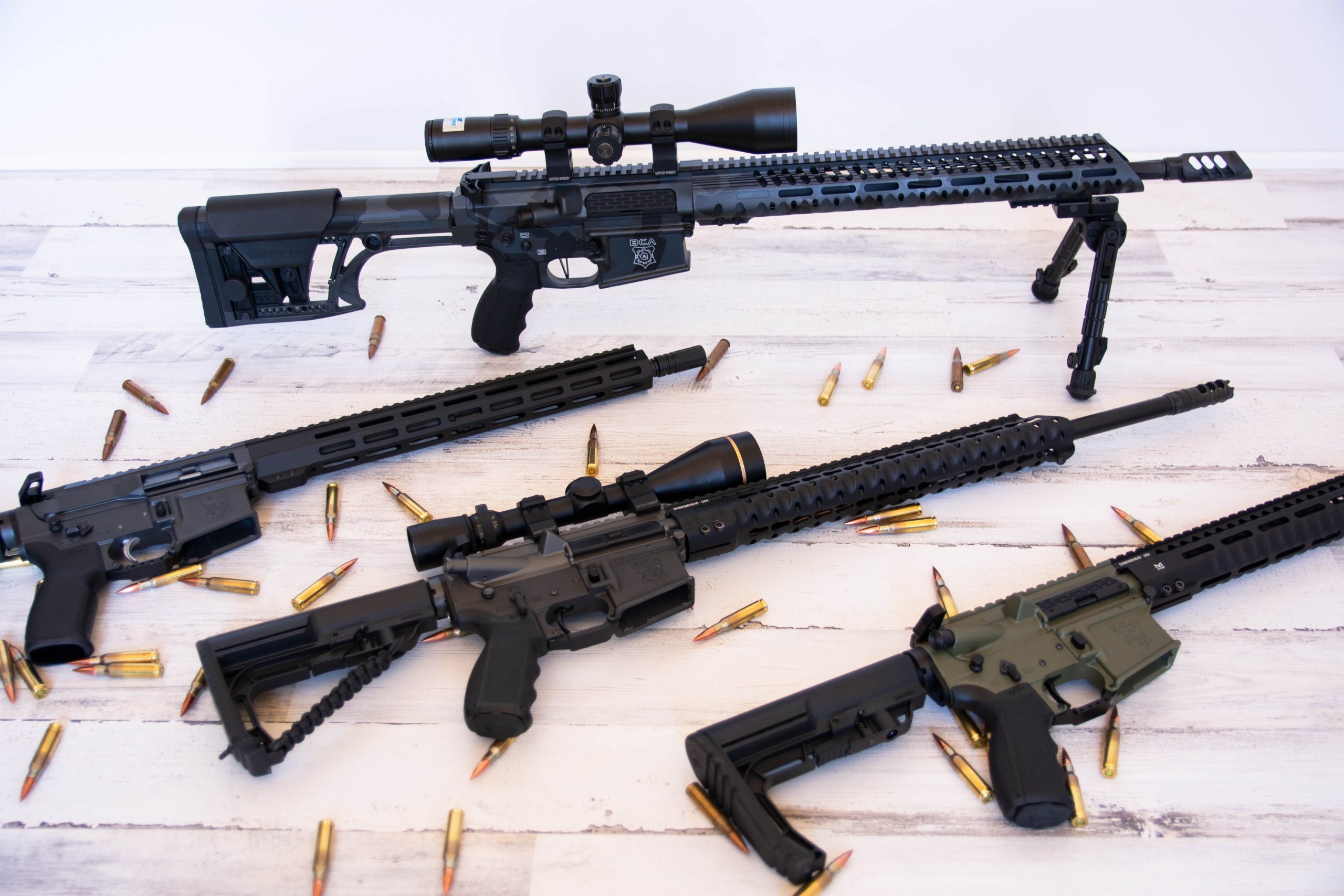 Bay County Armory offers four different tiers of modern sporting rifles. The base level rifle retails for $825-850. Its second tier retails for $1050. The third level goes for $1,450. Above that is considered a showpiece rifle, and costs vary. The 350 Legend can be built in any one of those tiers.

When deciding what’s right for you, ask yourself three questions. What’s the anticipated use of the rifle? How much will it be used? And how much customization am I looking for?

A custom-built AR platform isn’t for everyone. But for those seeking a carefully crafted modern sporting rifle, it just might be a new favorite.