When you think of an air rifle, do you think of the BB gun you found under the Christmas tree when you were a kid? Well, the modern airgun has come a long way from the plinkers of the past. Sure, the beloved Daisy Red Ryder is still around and a lot of fun, but modern, technologically advanced pre-charged pneumatic (PCP) airguns are changing the game among hunters looking for new challenges and opportunities. This growing population of air rifle hunting enthusiasts are using airguns of varying sizes and capabilities to take everything from small game at greater distances to some of North America’s largest game.

Tyler Patner, product manager for Pyramyd Air, one of the world’s largest airgun retailers, said that when people think of airguns, they likely think of the break-barrel air rifles, like the Daisy Red Ryder, which is a spring-piston air rifle and not powerful enough for hunting. Then you have the CO2 cartridge guns that aren’t used a lot for hunting because the CO2 is a temperature-sensitive gas that doesn’t perform well in cold weather. The next step is multi-pump guns, which shoot either BBs or pellets. The higher-powered models are effective on small birds or air rifle squirrel hunting at close range. 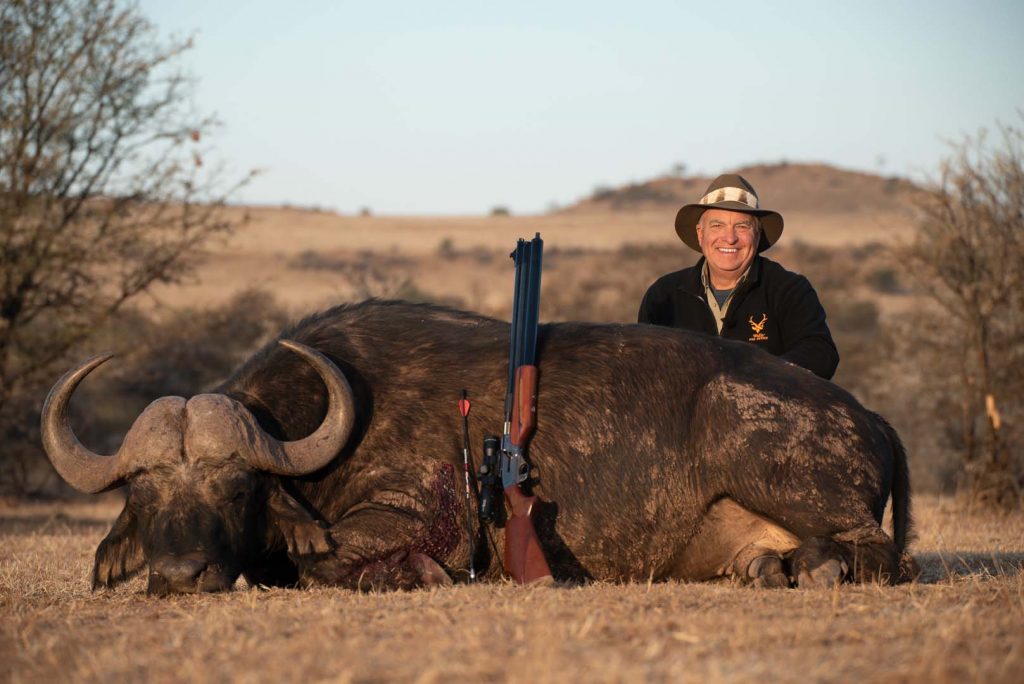 Hunting with airguns is a fun, new challenge for many avid hunters.

Patner said the real excitement is focused on the new generation of PCP air rifles that are providing new opportunities for hunters in calibers ranging from .177 all the way up to big-bore .50.

“The .22- and .25-calibers PCPs are being used to take squirrels, prairie dogs and groundhogs at insane distances, but ethically and accurately. And hunters are taking deer, hogs and even larger game with big-bore air rifles,” he said.

As it relates to hunting, Patner said the PCP air rifle has definitely created a new and unique niche among deer hunters looking for something different.

The PCPs use cylinders filled with compressed air to launch projectiles downrange with incredible accuracy and consistency. These guns get off a specific number of shots before having to be refilled. New technology has greatly broadened the capability and range of these air rifles.

Patner explained that a top-end .50-caliber PCP air rifle can put out 800 foot-pounds of energy – more than enough for use on deer or hogs. While it is still dwarfed by most centerfire rifles, it is greater than the average centerfire pistol.

Additional interest in the use of airguns by hunters has come about thanks to state legislation that allows for the use of big-bore air rifles, such as .30 caliber and larger for taking big game. Approximately 24 states allow for some type of big-game hunting with air rifles.

“Texas just came onboard in terms of air rifle hunting legislation, allowing their use for deer, bear, feral hogs and more. And, Arizona will let you hunt just about any large animal with an air rifle, such as bear, elk, bison and mule deer. The state is at the forefront of legislation, but it comes with a lot of restrictions,” he said.  “You need to be aware of what caliber and type of airgun you’re using. Each state has different laws that must be followed.” 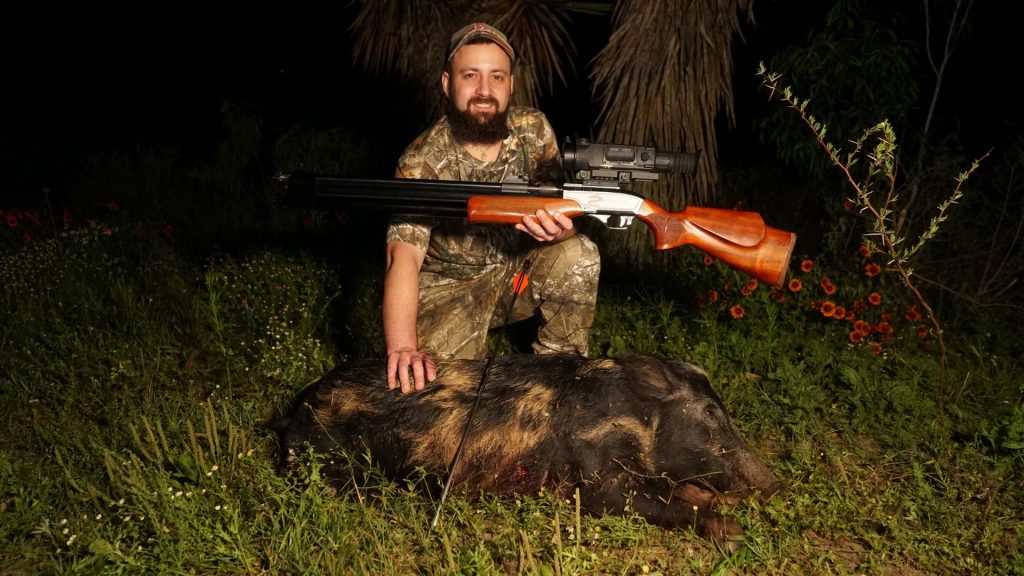 Air rifle hunting for wild hogs is legal in some states, just be sure to check the regulations before you head out.

Pyramyd Air has a helpful website that outlines the rules and regulations for airgun hunting in each state. According to the website, in Alabama, feral hogs and deer can be taken with .30-caliber and larger PCP air rifles. In Mississippi, whitetail deer can be harvested by airguns on private land only. The use of airguns is legal in Florida for wild hogs and whitetails, which can only be taken during firearms season with .30-caliber and larger PCP guns that propel a single projectile.

“There are two or three states that have additional restrictions or requirements for airguns and those are states that consider them firearms,” Patner said.

Since airguns are not classified as “firearms” by the Bureau of Alcohol, Tobacco and Firearms (ATF), they are not subject to significant government regulations.  You do not have to go through a background check to purchase one and it can even be shipped directly to your front door

“In most states you can buy airguns online and they can be shipped right to your door,” Patner said. “A lot of these guns even have built-in suppressors from the factory. In the firearm’s world, you have to go through a lot of paperwork, etc. to purchase a suppressor.”

Fewer laws and ease of purchase is just part of the appeal. Because they are so quiet, airguns don’t require that the shooter wear hearing protection in the stand or blind. They’re also cheaper than standard firearms, easy to use, safer than standard firearms and quite fun. And, since you have to be closer to your target (within 50 to 75 yards) to make an ethical and accurate shot, the hunter can enjoy a more intimate experience with the animal and it is much like bowhunting.

“Although they are powerful, they are not in the range with a centerfire rifle,” Patner pointed out. “It’s pretty rare that you’re going to take a shot on deer and drop it. So, you will need to develop your tracking skills – much like when archery hunting. Using an airgun to hunt larger game can help the hunter become well-rounded with his skills.”

Of course, there are some disadvantages to hunting with airguns.

“To get that higher energy, the airgun shoots a heavier projectile, which means you’ll have a slower velocity. So, you have to shoot at closer distances which are the distances that crossbow hunters and bowhunters shoot. The projectile’s trajectory drops once you stretch past that. Not that they don’t have the power, but it puts the hunter at a greater disadvantage,” Patner said. 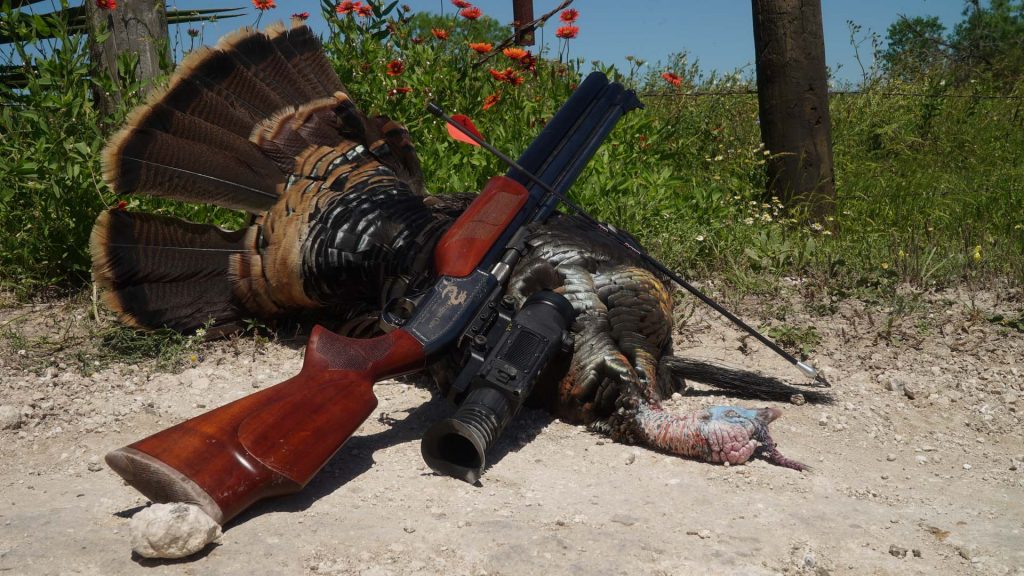 A turkey is the perfect type of game to hunt with an arrow-firing air rifle.

Patner pointed out that those who are well-practiced and know their equipment can stretch the shooting distance out further. But, if you’re gonna treat it the same way you do your crossbow and pick it up a week before the season, you’re gonna want to stick to shorter distances.

“Another drawback is that PCP rifles need an external source, such as a compression scuba tank or carbon fiber tank, to fill them,” Patner said. “Getting that air is easy, but you’ve got to factor that in to your packing and plans. Your ignition source is not in the cartridge itself. So, if your gun develops a leak, there’s a broader range of things that can go wrong. You’ve got to be more diligent to make sure the equipment is ready to go.”

While there are those who are taking larger game with high powered pellet rifles, the majority of air rifle use is still going to be by those who are hunting small-game animals.

“From a capability standpoint, airguns have only gotten more powerful, which makes them a more ethical choice for small-game hunting,” Platner said. “You can push boundaries past what was previously thought possible.”

He said air rifles continue to be an excellent tool for youth and new hunters and they offer a great way to learn both shooting and hunting skills, emphasizing shot placement over everything else.

“When using an airgun, you need to be in the moment and precise,” he said. “There is very little or no recoil. You’ll get no loud bang or pop. No explosion. They are quiet and easy to use. They provide good accuracy to hunt effectively at short distances. And, you can use them in the backyard without causing a disturbance in the neighborhood.”

Best of all, they’re relatively inexpensive. 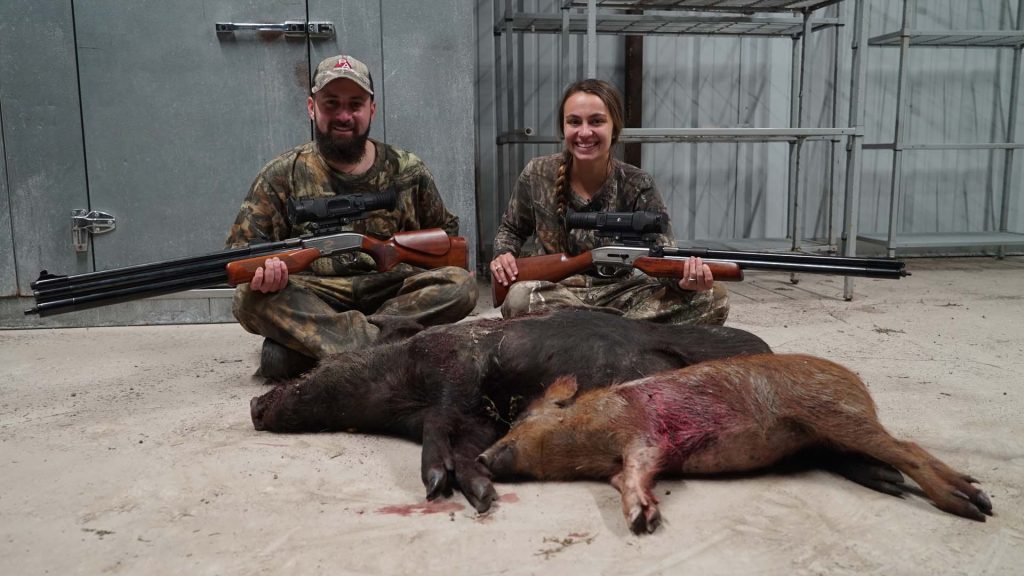 From squirrels to wild hogs to whitetail deer, you can fully kit out your airgun to fit your specific hunting needs.

When it comes to airgun popularity among hunters, the word is spreading and more and more people are giving them a try and liking the results. They are realizing that airguns are truly viable hunting tools and are looking to add the best air rifles for hunting to their arsenal.

Another sector of the PCP airgun market that has hunters excited is the arrow-firing airguns.

Tyler Patner, product manager for retailer Pyramyd Air, said many brands offer airguns that fire arrows exclusively, including Benjamin, Umarex, Hatsan and FX. The arrows that go inside of the barrel are called “air bolts’ ‘ and are available predominately in .45 and .50 caliber and work in a variety of PCP airguns.  Either way, these arrow-firing airguns typically shoot at velocities much higher than the average crossbow (though that gap is closing).

“To give you an idea, all of the PCP-powered arrow-firing airguns shoot at velocities at or above 450 fps. The air bolts in most PCP guns will shoot at least 500 feet per second (FPS) and one gun, the Hatsan Harpoon, has actually broken the 600-fps mark.  So, there’s really nothing you cannot take with them from a lethality perspective, just select a broadhead that gives you good results and go,” he pointed out.

Legality wise, they are presently allowed for shooting whitetail in only a handful of states, including Indiana, Georgia, Tennessee, South Carolina, North Carolina, Arizona and Florida. 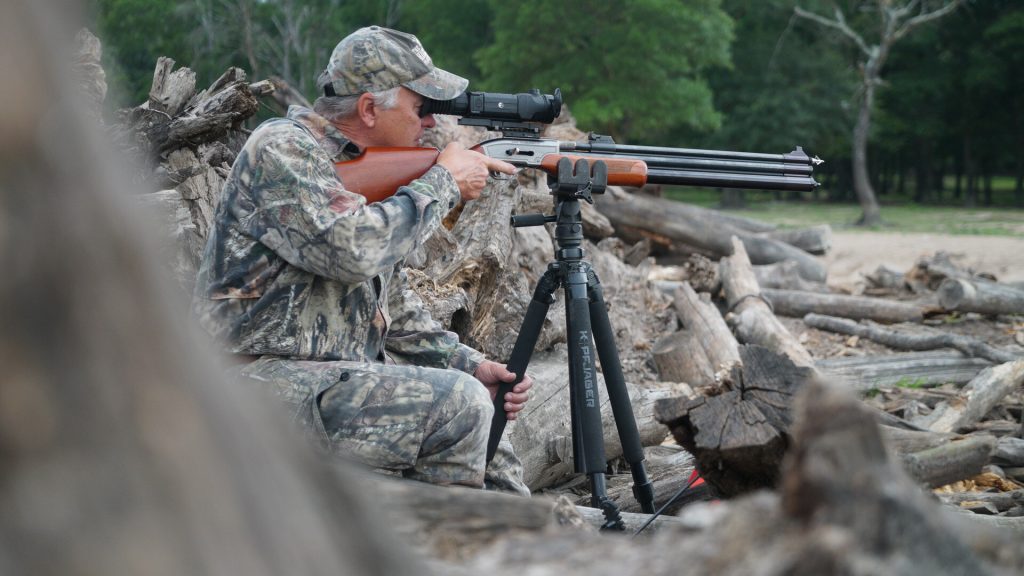 Arrow firing airguns are a good alternative for aging archery enthusiasts that are finding it more and more difficult to draw a bow.

“From an advantage/disadvantage perspective, the only real disadvantage is that in most cases, these PCPs are louder than a crossbow.  I suppose you could also consider it a disadvantage that they need to be filled with air from an outside source (like a hand pump, tank or compressor).  Outside of that, the advantage is almost all in the favor of the arrow-firing airguns. They are easier to load, there is no crank or other cocking mechanism to deal with.  Most are bolt-action operated just like a standard rifle to make them ready to fire.  They shoot faster and just as accurately as most top-end crossbows, but cost considerably less than today’s top end crossbows, even with fill equipment factored in,” Patner explained.

According to Patner, there’s been a big push for arrow-firing airguns from both aging archery hunters (folks that are having trouble with even their crossbows) and those individuals that have limited or no use of one of their arms or hands.  Of course, there are also a lot of current airgun users that are simply enthusiasts that want to get into the woods with one of these PCPs because it’s their preferred hunting tool.