Although catfish feed along the bottom, they also will school-up and swim in mid-water and often just under the surface. All catfish species will eat almost any bait at certain times of the year but your odds of landing the catch will increase if you select the best catfish bait for each species.

* Little or no current – Sink chum bags or cans of dog food as well as fish stink baits for channels and blues in dead lakes, beaver ponds and shallow lakes.

* Tailraces with running turbines – When mayflies swarm in the spring and cover the water around tailraces, fishing with mayflies will catch blues. Also cut shad, dead shad minnows, live minnows and shad guts will produce blues and channels in tailraces

Learn the Characteristics of Catfish to Have the Most Success

All North American species of catfish have long feelers or barbels (whiskers) on their faces that enable them to locate food. A catfish tastes with these feelers as well as its entire body that has more than 100,000-food sensors. Some catfish, particularly the channel catfish, are sight feeders too. 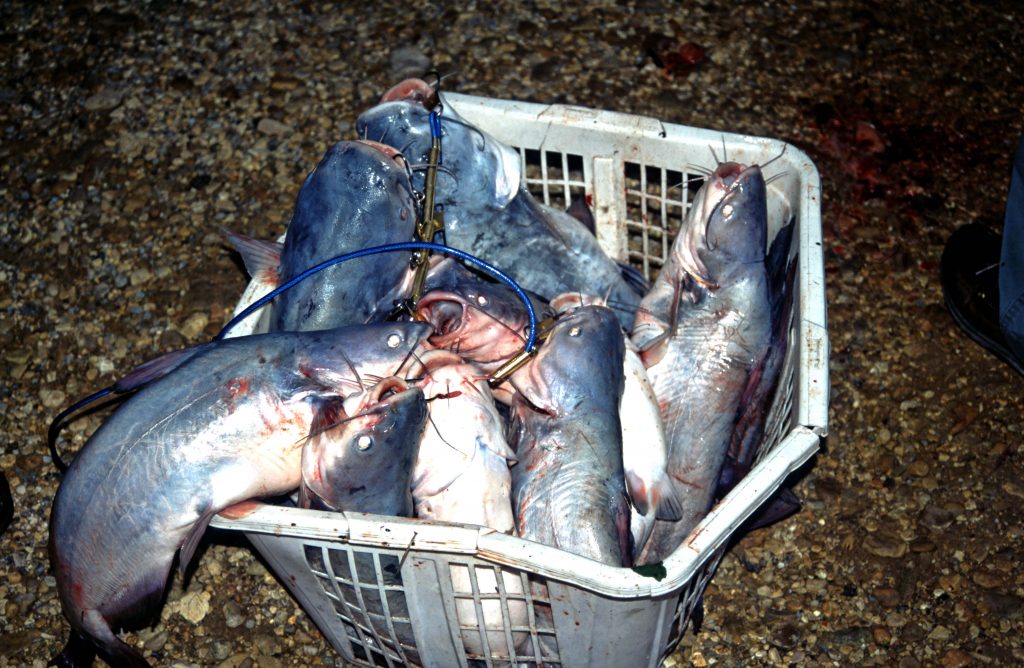 Many anglers have different reasons for catching catfish in July, however, most catfishermen want to pull in Mr. Whiskers to enjoy a fish fry.

You can pinpoint catfish with your depth finder and by studying topo maps before you fish by looking for long, sloping points, flats, old roadbeds, drop-offs, holes, canals and submerged bridges. Catfish also follow seasonal migration patterns, according to water temperatures. With a water temperature of 55 degrees or below, catfish generally will be found in deep holes. In the early spring, catfish move into more-shallow water, which warms-up first. Lakes with rocky banks, riprap, rock slides and exposed layers of underwater shale will have catfish near those sites, since rocks hold heat and warm-up the water around them. Rocky banks facing south and southwest usually warm-up first too.

Depending on the subspecies, catfish spawn when the water temperature is 60-84 degrees. In areas where both channels and blues live, the channels will spawn first before the blues, which generally spawn in 70-75-degree water. Flatheads require the warmest water for spawning with 80-84 degrees their favored water temperature.

People may be surprised at what baits catfish will hit. Some years ago when the catfish were biting, a good friend of mine was out of bait and couldn’t find any at the bait shop. After spotting a dead possum on the side of the road, he skinned the possum and sliced and diced it. He told me later, “I was very surprised. The catfish hit the possum bait better than they had other baits I’d been using.” 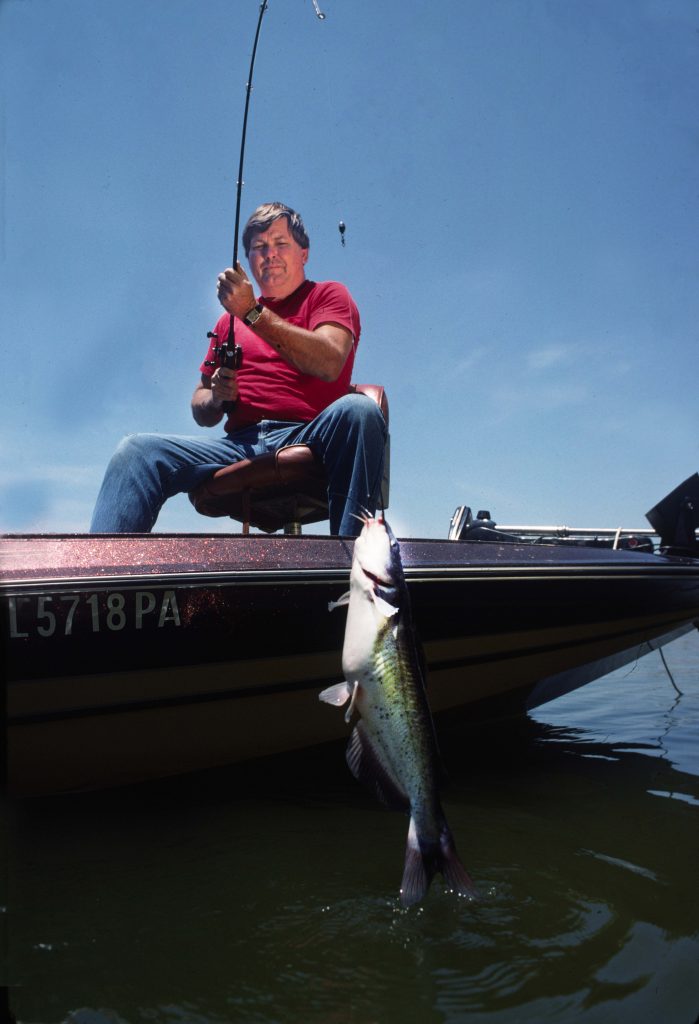 When fishing in a tailrace with a rod and a reel, downsize your bait, and fish close to the bottom, since that’s where the catfish usually will be feeding.

The best baits to catch catfish depend on several things: water temperature, price, smell and availability of the bait when you’re fishing, the catfish’s mood and its available food source. Also baits that work well in the winter may not produce in the summer. Check-out the stomachs of the catfish you catch to learn what the catfish are eating where at the time of year you’re fishing. The temperature of the water also governs how actively catfish feed, because the enzyme action in a catfish’s stomach doubles with each eight-degree increase in water temperature. The hotter the weather becomes, the more catfish feed.

What Is The Best Bait For Catfish

* Shad Guts: Fresh shad gut is some of the best bait for blue catfish, very productive in tailrace areas, and frozen shad gut after thawing.

* Out-of-Date Shrimp: Ask your grocery store if you can buy out-of-date shrimp and freeze it or keep it on ice. Definitely some of the best catfish bait for ponds. 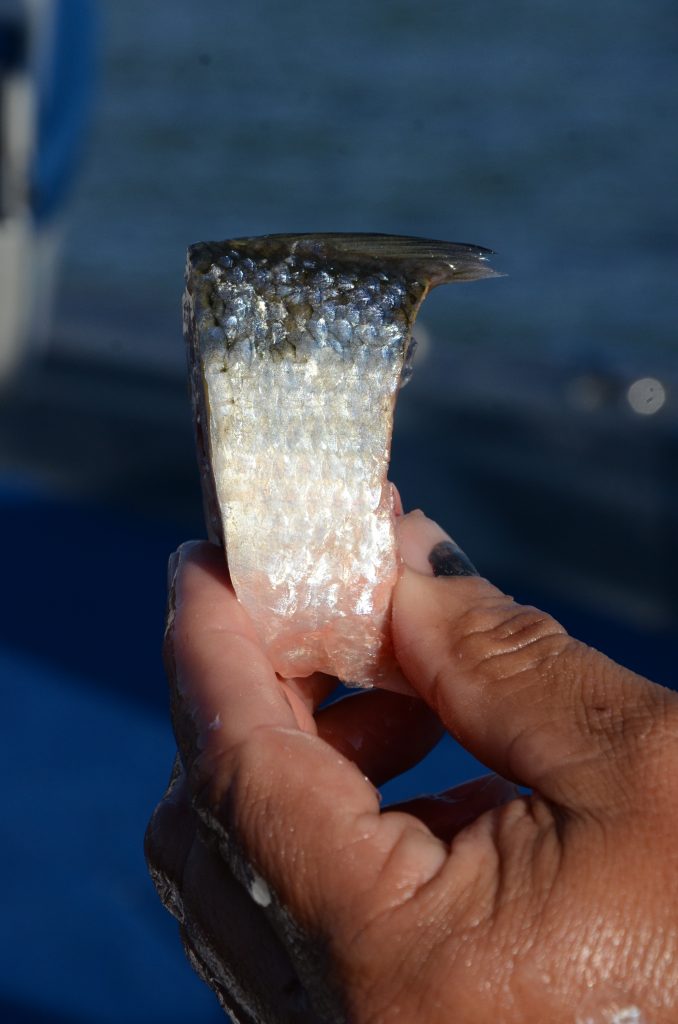 Large cut chunks of hickory shad, like the one pictured here, generally will produce the largest blue catfish.

* Bonito: The bloodiness of this saltwater fish and the water-soluble oil it produces causes the meat to turn rancid easily. The bonito’s white belly seems to be the most-productive bait.

* Dead Fish Mixture: Put pieces of cut-up fish, clams, minnows, crawfish and eels into a loosely-covered glass jar. After this mixture turns to oil, mix 1 part oil of anise with five parts of the fish oil, and use it on catfish baits.

* Out-of-Date Beef, Kidneys and Livers: Buy these inexpensive pieces of meat, cut them into small chunks, put the chunks in mason jars, and place lids on them. Bury the jars in the ground for 2-5 days. Because the jars don’t see sunlight or are exposed to air and/or drastic temperature changes, the meat becomes rancid but not rotten.

* Dip Baits: My friend Monte Burch comes from a long line of serious catfishermen and shares this recipe.

Use 2 gallons of dead shad or minnows, seven pounds of Limburger cheese and one ounce of oil of anise. Put this fish in a five-gallon bucket, cover it with water, put a lid on the bucket, and bury the bucket in the backyard. Three to four days later, dig the bucket up. Pour off the liquid, shred or melt the Limburger cheese, and mix all with oil of anise. Dump the mixture into pint fruit jars, and put lids on them. Don’t screw the lids down tightly to keep the jars from exploding. Then a week later, thread pieces of plastic worms that have been dipped in the mixture on your hooks. The best bait for channel catfish is anything that sticks and this definitely meets that criteria. 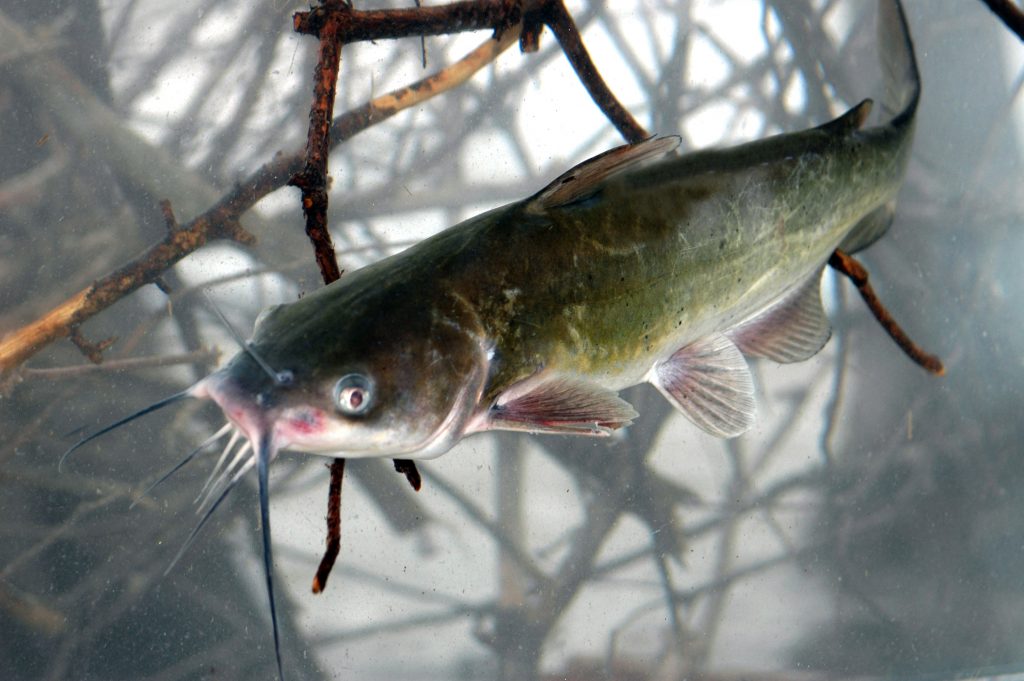 The channel catfish, pictured here, often is the most plentiful catfish species caught in any waterway in the South.

– Doughballs – Place flour, cornmeal and creamed-style corn in a bowl. Pour pineapple juice into the flour mixture, and mix. Add flour and pineapple juice until a large ball of dough forms. Mix in uncooked rice. Put the dough in a burlap bag, and sink it in a lake. Or, before you begin fishing, pinch off pieces of the doughball, and throw them out in your general fishing area with little or no current.

– Peanut Butter – Another stink bait recipe combines 80% three-year-old cheese, 5% Calf Starter that you can purchase at any feed store, 10% dried animal blood, 5% peanut butter and flour. Mix the ingredients together. Slowly add the flour, continue blending, and then dip plastic worms in it.

Disclaimer: Check with the Department of Conservation to make sure you can use soap in the area where you want to catfish.

– Wheat – To lure cats into main river points, the intersections of river and creek channels and the backs of small bays off the main rivers, fill a five-gallon bucket about 3/4-full of wheat. Add four cloves of garlic and five squeezed lemons, and cover with water. Let the mixture sit for one to two weeks to ensure thorough fermentation of the wheat, continuing to add water as it evaporates. Spread the wheat mixture with a scoop on the tops of points, along the edges of creek channels and/or in the backs of bays.

– Soap – When fishing for catfish in cool water, use Ivory or Octagon soap. The cooler the water, the better soap works, because it disintegrates in water slowly. Put the bars of soap on a cookie sheet, and heat them in a 250-300-degree oven, until the soap becomes soft and pliable but not runny. Remove the soap from the oven, cut it into 1/2- to 1-inch chunks, and bait the soap on your hooks.

* Dogfood: To chum-up cats with dog food, use an ice pick, and punch two dozen holes in a can of inexpensive dog food. The day before you fish, sink the can of dog food on a rocky, clay or a sandy bottom without mud to call catfish. Some outdoorsmen sink burlap bags containing dry dog food at the backs of bays, the edges of creek channels or even under their boat docks.

* Hot Dogs: Outdoorsman Mike Handley had run out of catfish bait the day before he planned to put out a trotline. He searched through his refrigerator, found hot dogs and said, “I cut the hot dogs into small pieces that would bait well on my hooks, put the hot dogs in a quart fruit jar, poured a commercial catfish lure into the jar to completely cover the hot dogs and let the jar sit overnight. The next day after trotline fishing for just 2 hours, I’d caught more cats than ever before.” 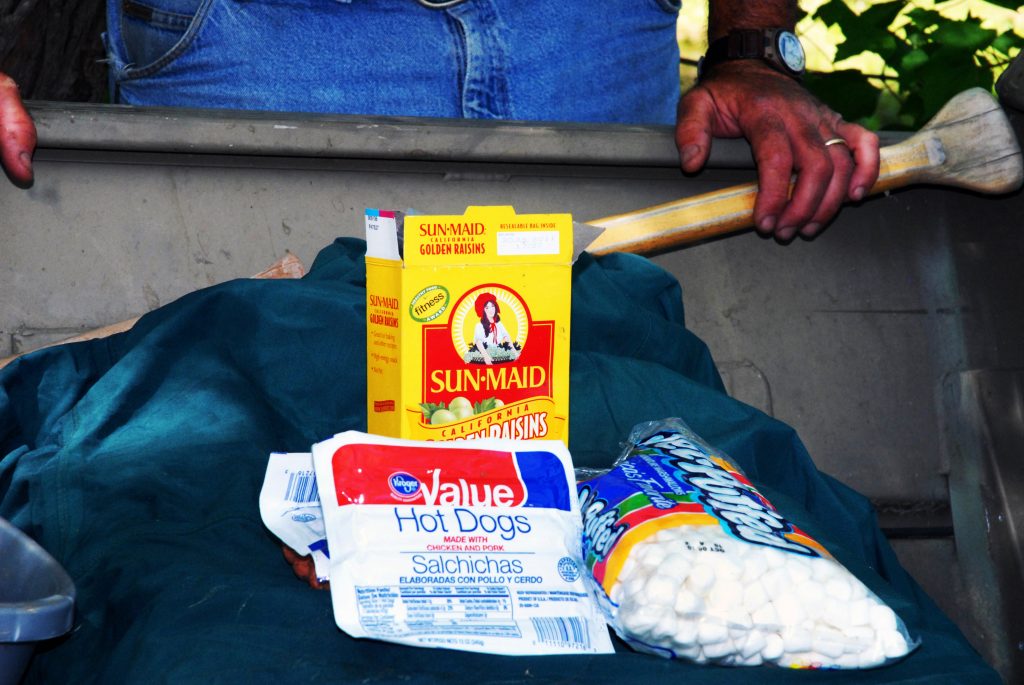 Offbeat baits that can and do produce catfish include golden raisins, hot dogs and miniature marshmallows.

* Cheese and Honey Sponge Baits: Place rancid cheese in a large, flat, throw-away aluminum pan, light a Coleman stove outside, due to the nasty smell, melt the cheese, and add four or five tablespoons of honey. Lay out sheets of tin foil on the ground, cut pieces of 1/4-inch-thick sponge to fit inside the pan, and spread the cheese-and-honey mixture. Turn the sponge over, and let the other side soak. Remove the sponge from the pan, cool it on the tinfoil, and use scissors to cut the sponge into bait-size, 1/4- to 1/2-inch squares. Place in quart freezer bags, and seal. This durable bait produces for hook-and-line fishermen and limb liners, trotlines and juggers.

* Golden Raisins: Golden raisins are good catfish bait for set hooks, trotlines or any method of fishing that allows the bait to be in the water for an extended time. The raisins are the most-productive during the hot summer months – particularly when fishing at night. The raisins in beaver ponds or dead sloughs off a main river with still water and very-little current will swell-up on the hooks and ferment, and due to their bright-yellow color, the cats can find them easily.

* Natural Baits: The Asiatic clams on the Tennessee River and in other places during the summer often experience die-offs that call catfish. The dead clams open their shells, the little animals inside float to the surface, and catfishermen can bait with those, or collect the mussels, open the shells and use them as catfish baits. Miniature marshmallows also work when the Asiatic clams die-off. 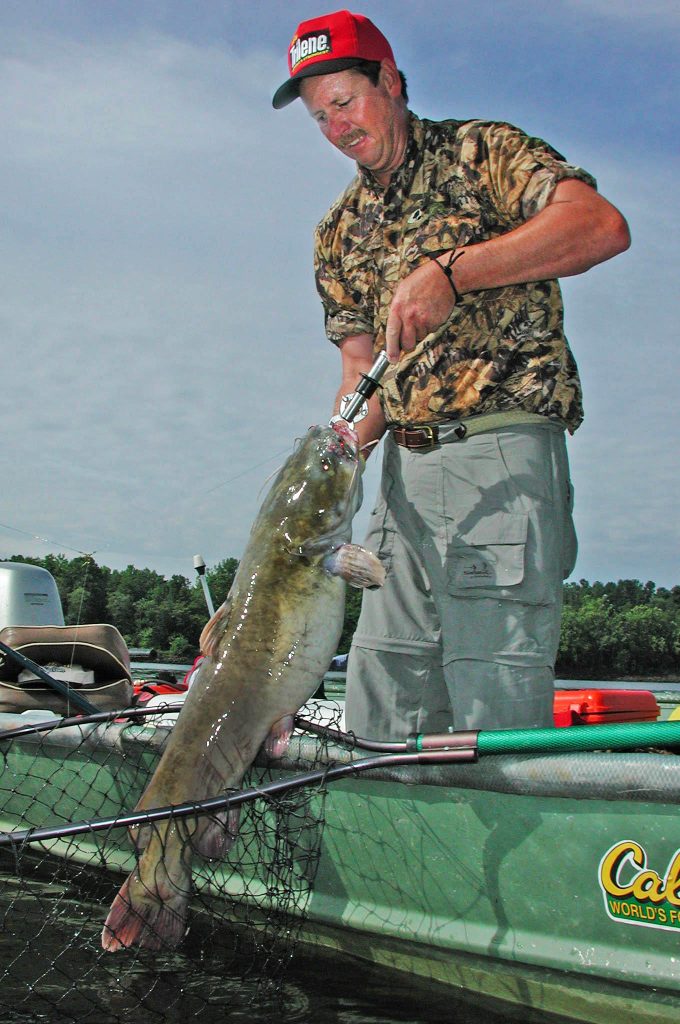 Often flathead catfish like this one are big and ugly but usually prefer live bait more than dead bait.

* Live Bait: Live bait such as perch, bluegill, sunfish, or mudcats are some of the best bait for flathead catfish.

Oftentimes the most-difficult part of catching catfish is getting the bait. The easiest and quickest way to make sure you always have bait before you go catfishing is to have some extra packages of Fish Bites’ Yeh Monn! Freshwater Catfish Baits with you. 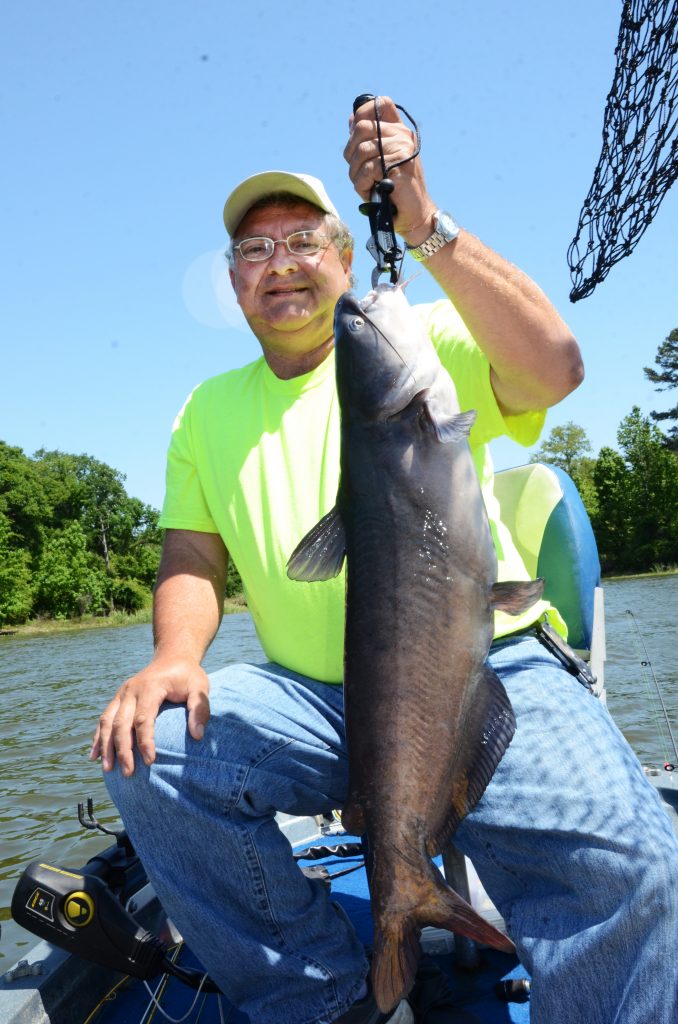 The majority of catfish Tony Adams catches in the summer are big blue cats like the one pictured here.

“Cut hickory shad (often called skipjack) produces the most and biggest catfish for me and my clients when we’re jug fishing at Lake Eufaula on the Alabama/Georgia border,” Tony Adams of Eufaula, who has fished Lake Eufaula for 27 years, says. “I did a side-by-side comparison and baited half the jugs I put out with the Yeh Monn! baits and half of my jugs with the same cut hickory shad bait I’ve always used.

“The results of my tests showed we caught the same numbers of catfish on the Yeh Monn! Freshwater Catfish Baits as we did on the cut shad. Fresh-cut shad often is hard to find at certain times of the year, so I have no hesitation in using the Yeh Monn! product.”