If you’ve been in the market for a kayak, pontoon boat or freshwater fishing boat in the past year, it’s no news to you that many models are hard to find. The Covid pandemic, which was terrible for a lot of businesses, was great for recreational industries including both the fishing and boating industry.

Because boating and fishing allow us to maintain the immunological “bubble” around our close family members, both have been favorite recreations for the past two years. And with lots of time off work for most of us, like it or not there has been lots of opportunity to get out on the water. We’ve even had some substantial stimulus checks land in our laps, and apparently for many, that money went straight into a new or used boat.

A new boat is always an exciting purchase.

According to the National Marine Manufacturing Association (NMMA), retail boat sales grew 12 percent in 2020. That equates to more than 310,000 new powerboats sold, a number the boating industry hasn’t seen since the 2008 recession.  Retail unit sales of new powerboats in February 2021 were up 34% compared to the same time period last year, NMMA reported.

There were also 82,000 new personal watercraft, aka “jet skis” like Sea Doo and Wave Runner, as well as a flood of dedicated tow boats or wake boats hitting the water. Some companies report backlogs of many months before they’ll be able to fully supply dealer demand.

Younger people stay in boating longer, so they’re good customers to have, particularly in an industry that formerly saw most of its clientele in the older age groups. And young families expose their kids to boating, as well, bringing more potential customers into the sport for the future.

Boston Whaler just reopened a large plant in Flagler County, Florida, which will create 400 jobs due to “unprecedented demand” for their boats, and Johnny Morris, known for seeing where the market is heading, just purchased Hatteras Yachts and will add 500 jobs in Carolina’s Low Country.

In more good news for the industry,

DiscoverBoating.com site traffic is up 37 percent year to date compared to 2020, including an increase in female visitors (up 18 percent) and younger visitors (up 56 percent for those ages 18-24). More diversity and more youth is always a good thing for a leisure industry.

The largest unit sales numbers (50 percent of total boat sales) came from the pontoon boat market and freshwater fishing boats. All in all, more than 100-million Americans went boating last year, and the numbers are expected to continue to increase this boating season. 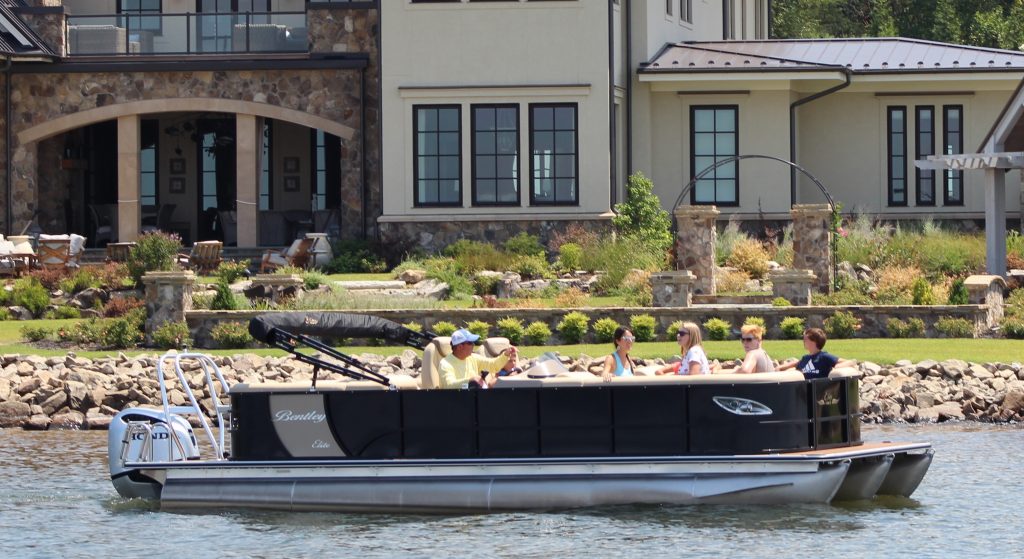 A pontoon boat is the perfect recreational craft for a leisurely weekend cruise with friends and family.

How does all this affect local recreational boat dealers? We talked to the folks at Buck’s Island Marine in Southside, Alabama, about their experience in the past year. Buck’s Island is one of the oldest and best known freshwater boat dealers in the region, located on Lake Neely Henry just south of Gadsden, Alabama.

“We’ve done really well the last two years,” says Angela Britt, Service Manager and 3rd generation co-owner of the facility founded in 1948 by her grandfather, Buck Lumpkin. “Our only problem has been occasional supply issues, but that’s easing up now, too.”

The business has evolved from a straight sales operation to a full service marine dealership with 18 service bays and a staff of eight mechanics and wiring experts who take on everything from engine installation to rigging electronics, trolling motors and Power-Poles. The technicians are certified in both Mercury and Yamaha outboards, and can work on any brand.

They also have a burgeoning tackle shop and a strong online sales operation that lures boat customers in from as far away as Florida, Tennessee, and Georgia.

Angela says their success is based on the basic philosophy her grandfather had when he founded the business: “Treat people as you would like to be treated and your business will do well.” 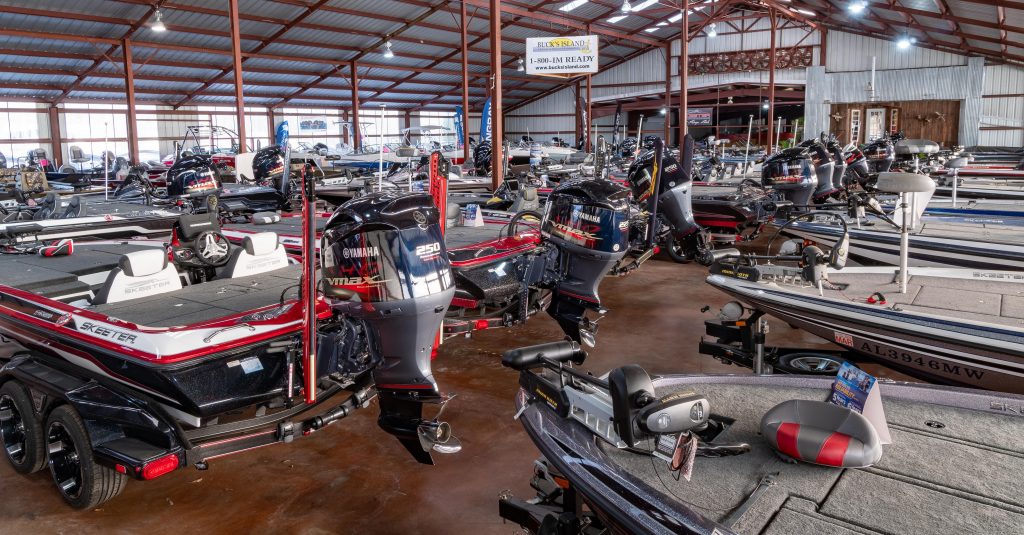 With more people wanting to be outdoors, specifically on the water, the boating sales industry is doing great this year.

Buck’s Island has done particularly well during the covid pandemic in selling pontoon boats, likely because they create a “living room on the water” as Angela calls it, a safe space for families to get away and enjoy each other. They stock Crest and Bentley pontoons as well as Skeeter, Falcon and Avid bass boats, and usually keep an inventory of inspected used boats, as well.

They’ve not missed out on the kayak craze that’s sweeping the nation, either.

“We started stocking Jackson and Hobie fishing kayaks and accessories about three years ago and that’s doing really well for us, too,” says Angela.

They’ve also added a pro-grade tackle shop which draws many local bass tournament anglers to their business. Some come to buy a pack of plastic worms, take an interest in a boat deal and wind up with a new rig.

As with many businesses, Angela attributes a large part of their recent success to a strong online presence.

“Being online lets our local customers see us, but it reaches out to customers all over the southeast, too,  she said. “We not only promote and sell product online but we also hold regular tech seminars with our experts where boaters can send in their questions and get them answered, and we also sponsor local fishing guides with on-line fishing reports for all the lakes near us, so there’s a lot to attract customers to our site.”

Last but not least, Angela says Buck’s Island’s connection to financing makes it easy for customers to buy.

“We have a group of banks that we deal with that understand boats and boat loans—a lot of banks don’t. It makes it easy for our customers to get financing if they need it.”

Put it all together and Buck’s Island Marine, like many others around the southeast and across the nation, has not only weathered the covid crisis, they’ve found ways to thrive.