Texas, Alabama, Louisiana, Florida and South Carolina each now have a CCA STAR tournament aimed at boosting membership through offering amazing prizes with the help of industry partners who generously support the prize ladder.

Actually, the STAR stands for “State of Texas Anglers Rodeo”, but since it has spread to other states so successfully, the STAR designation has been maintained.

Together, they award over $1 million annually to anglers who enter a CCA STAR tournament but you have to enter in advance of catching that tagged fish. Entry requires at least a $35 base membership in CCA plus the $40 entry fee for the tournament. No one can win a prize in the event without being a currently paid-up CCA member and becoming a member and entering the tournament after you catch a tagged fish is not permitted. (They polygraph all winners, so cheating is not a good plan.)

Only four years later, gill nets along the Texas coast were outlawed and both red drum and speckled trout were declared game fish.

The successful conservation movement that started with the “Save the Redfish” campaign got the attention of anglers across the Gulf and by 1985, chapters had formed all along the Gulf Coast.

CCA Alabama was the first state chapter outside of Texas. With eight chapters in the state, CCA Alabama has over 2200 members who work to conserve our marine resources for future generations to enjoy.

By the early ‘90s, the South and Mid-Atlantic regions had CCA chapters, in 2007, Washington and Oregon chapters were formed and in 2015, the CCA California chapter was created. The fish are different, but the challenges facing them are often the same on all coasts – destructive commercial gear, degraded habitat and misguided management concepts.

CCA has proven time and again that anglers are the best stewards of the marine environment. Conscientious anglers work to protect not only the health, habitat and sustainability of our marine resources, but also the interests of recreational anglers and their access to the resources they cherish.

One hallmark of the organization has been to work within the political system, gaining a scientific understanding of fisheries and habitat issues and calling for fisheries and environmental laws that support a healthy fish population.

With a growing, well-informed, active membership, CCA continues the mission launched by those 14 visionary anglers so many years ago.

If you get lucky and catch one of those tagged fish, the deal is you call the tournament hotline within two hours of the catch and send a photo by text message to arrange to go to the nearest STAR check-in station to have it officially recorded.

You have to leave the tag in place and deliver the whole fish to the check-in committee member—it can’t be frozen, gutted, mutilated or altered in any way, and the fish becomes the property of CCA. 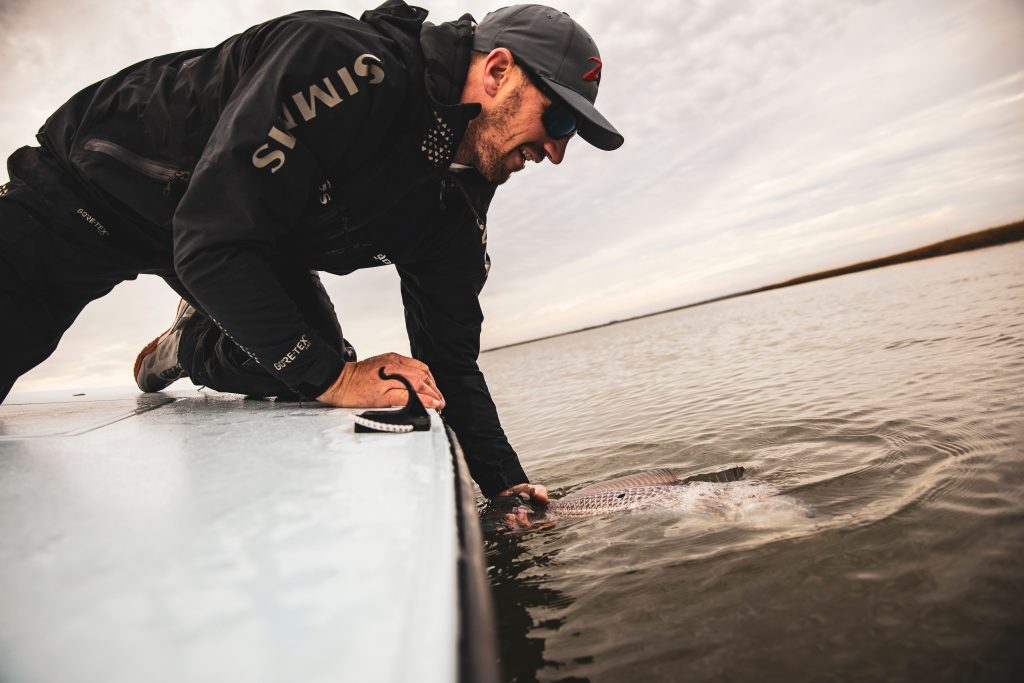 The odds of landing a tagged redfish off Alabama’s coastline, only being 53 miles, are much higher than in Florida.

The first participant to call in a tagged redfish and have it properly checked-in and certified by CCA-AL will win a Nautic Star 215 Bay Boat, Yamaha 150 4-stroke outboard & trailer package.

According to Blakeley Ellis, CCA-Alabama executive director, the value of the rig is about $66,000.

“We’re able to provide this great prize thanks to the generosity and the conservation ethic of Nautic Star and of Yamaha,” Ellis said.

Money from the event, from local chapter banquet/auctions and from the sale of CCA-Alabama vehicle tags is used to support fish conservation and research in state waters.

The CCA Saltwater Fishing License tag for cars and trucks costs $50 more than a standard tag, and can be personalized at no extra charge, according to Blakely.

“CCA gets $43 out of that $50,” Ellis explained. “So it’s a very high proportion of direct contribution to the resource to buy that tag.”

CCA Alabama recently announced its support of two fish conservation programs for in the University of South Alabama’s Department of Marine Sciences (USADMS) that will advance knowledge of marine sportfish now and in the future.

With a donation of $20,000 for a cobia tagging and research program, and $20,000 for the USADMS Student Benefit Fund, CCA Alabama affirmed its commitment to enhancing conservation-based science for the benefit of marine resources and recreational anglers.

“These donations are at the core of CCA’s Science of Conservation Program, and we are proud to partner with a marine science leader such as the University of South Alabama to improve the sustainability of our amazing coastal resources,” said Matt Grant, CCA Alabama State Chairman. “We are excited about the potential of the cobia tagging program to further understanding of one of the most popular game fish on the Gulf Coast, and we hope our support of the Student Benefit Fund will help graduate students reach their full potential and become tomorrow’s leaders in the challenging field of marine science.”

CCA created the Science of Conservation as a national program to bring together anglers, marine science centers and industry to provide financial support for scholarships and projects that will ultimately improve understanding of the marine environment and enhance the role that recreational anglers play in fish conservation and as stewards of our shared marine resources.

The sale of CCA-Alabama vehicle tags is used to support fish conservation and research in state waters.

“We’ve had tremendous success collaborating with marine science institutes in the past, and the Science of Conservation Program will create continued opportunities in the future,” said Patrick Murray, president of CCA National. “These two endeavors at the University of South Alabama are the kinds of investment in the future that we envisioned when we created the Science of Conservation, and we are excited about what they will produce.”

The University of South Alabama’s Marine Science Student Benefit Fund helps cover expenses encountered by graduate students as they travel for their research and attend/present at conferences, as well as other costs associated with work necessary for their advanced degrees.

“It allows us to fund a diversity of thesis and dissertation topics, from basic oceanography to fisheries ecology,” said Dr. Sean Powers, Chair, USA Marine Sciences. “The fund gives a tremendous return on investment. From modest grants of $1,000 to $3,000, graduate projects can be completed and careers made.”

Cobia Research in the Gulf Funded

CCA Alabama’s donation to the cobia tagging program will help fill in the blanks on cobia migration routes to and from the Central Gulf of Mexico, as well as their discard mortality when caught and released.

The project will use MiniPAT Tags that are a combination of archival and ARGOS satellite technology. It will allow researchers to track the movements and behavior of a fish that does not spend enough time at the surface to allow for use of real-time ARGOS satellite tags.

Updates on the findings will be made available to the public as the data becomes available.

“Cobia are amazing fish, and their great ability to migrate coupled with their very rapid growth make them a wonderful, but challenging species to study,” Powers said. “With the assistance of CCA Alabama, we will be able to tag five fish with tags that will give us information on migration and discard mortality.” 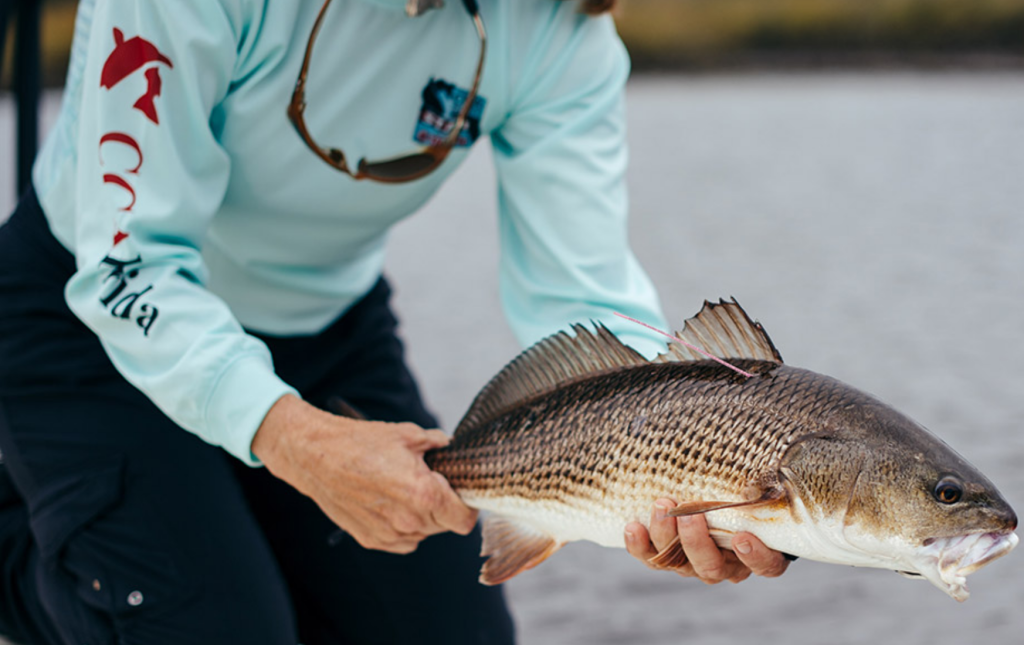 The efforts of the CCA are helping maintain the fish populations of many species in the Gulf Coast.

“We couldn’t have done this without the hard work and dedication of our members from across the state,” said Ellis. “Projects like these are exactly what CCA Alabama is all about.”

To learn more about these and other fish conservation efforts by anglers in support of marine science, visit CCAAlabama.org and ScienceOfConservation.org.

Be on the lookout for tagged cobia in the northern Gulf of Mexico. CCA Alabama contributed $40,000 in 2019 and 2020 to purchase 12 GPS tags for the University of South Alabama. The final tag was deployed in September 2021, and the tags are set to pop off and transmit their data in 2022. If you catch one of the tagged cobia, CCA asks that you get some pictures, measurements, and, if possible the tag number, and release the fish.

As a reward for releasing the fish, CCA Alabama and Daiwa are offering a 2022 Daiwa Certate SW 8000-H Spinning Reel with a value of more than $600.