By the time the month of October rolls around, most anglers have had their fill of hot weather fishing and look forward to the first cooler weather of the upcoming fall. Which means they start to think about how to catch redfish and speckled trout during this transition into fall.

As ambient air cools the water, the speckled trout begin to react by transitioning from the deeper water structure pattern to a shallow water pattern. Bull redfish return to the bars at the mouth of Mobile Bay after having spent six weeks or so gathered up offshore in a spawn.

Slot reds are active in the marsh systems, particularly in areas where there is shell or grass bottom. Early fall is also a period when flounder make their way offshore. When doing this, they can be caught at passes near the mouth of Mobile Bay and the Mississippi Sound.

Water temps in early October are still in the summertime range of 75+ degrees.

For speckled trout early in October, stay focused on the deeper pattern which is structure in the form of rigs, reefs, wrecks and rockpiles in water depths of over eight feet. Live bait fished under a slip cork or tight-lined will be the go-to for the early fall trout. 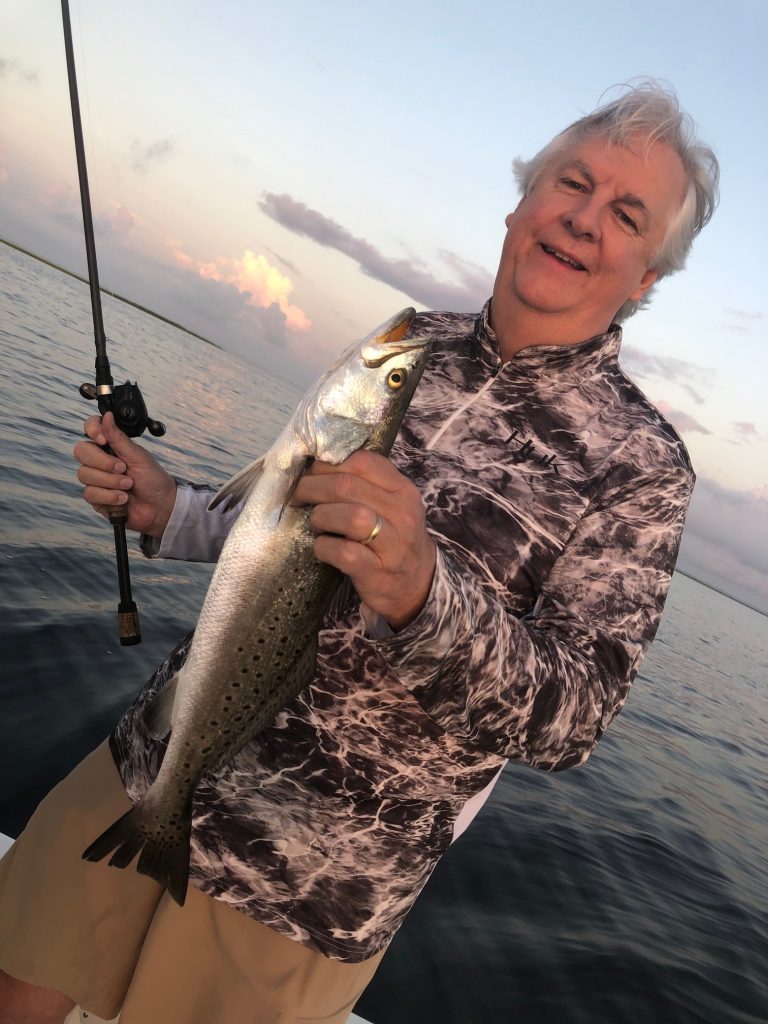 Anglers want to focus on deeper structure when fishing for specks as the weather cools down.

Live and artificial shrimp fished under popping corks will out produce anything but for some real exciting action try top water plugs and Slick Lures early and late and on cloudy days. As the weather cools late in the month, make a move to the upper end of the Bay and into the Delta. The same rigs will produce fish and always be on the lookout for diving gulls. They will be feeding on shrimp that are being chased to the surface by feeding trout.

Finding and fishing a bird school properly will result in some of the most incredible trout action that you may ever experience. When a flock of diving gulls is spotted, take a second to determine which way the school is moving. Then approach from the upwind side of the diving gulls. Be sure to shut down the engine well away from the school and use a trolling motor or the wind to drift into the school.

Even trout in a feeding frenzy will shut down when run over by a noisy outboard. Also, you’ll notice often that the birds leave when you get close to the school. That doesn’t mean the fish have left, just that the birds don’t want to be near a boat.

Rather than chase birds all day, try using your Power Pole or some sort of anchor when you hit the fish. You’ll be surprised at how long they stay put after the birds leave. I tell my charters all of the time “Don’t worry about where the birds are diving.  We’re fishing for fish, not birds.

How To Catch Redfish

On days where there is hard tidal movement, it’s hard to beat the action on bull redfish at the mouth of Mobile Bay. Alabama’s famous Dixey Bar rivals the most consistent producer of big reds of probably anywhere on the Gulf Coast. The key is to drift across the bar while both dragging a live pin fish behind the boat and casting a GULP Swimming Mullet on a jig head to both sides.

This will allow you to find the reds which will be gathered in schools. When you find one, you’ve found a school. Cast in the direction of the hooked fish and more often than not, you’ll hook everyone in the boat up with one of the bronze bombers.

Remember that these reds are the spawning stock. They are very robust fish and can survive being caught, photographed and released as long as they are handled properly. They also don’t offer much in the way of food quality, so practice catch and release on them and we’ll have the fishery around to enjoy for a long time.

Slot reds can be found in the aforementioned trout areas. Focus your efforts on banks that have features in terms of points and creek mouths- especially if those areas have grass or shell bottom. What to use to catch redfish? Shrimp imitations like GULP Mantis Shrimp and of course live shrimp under popping corks are most effective. 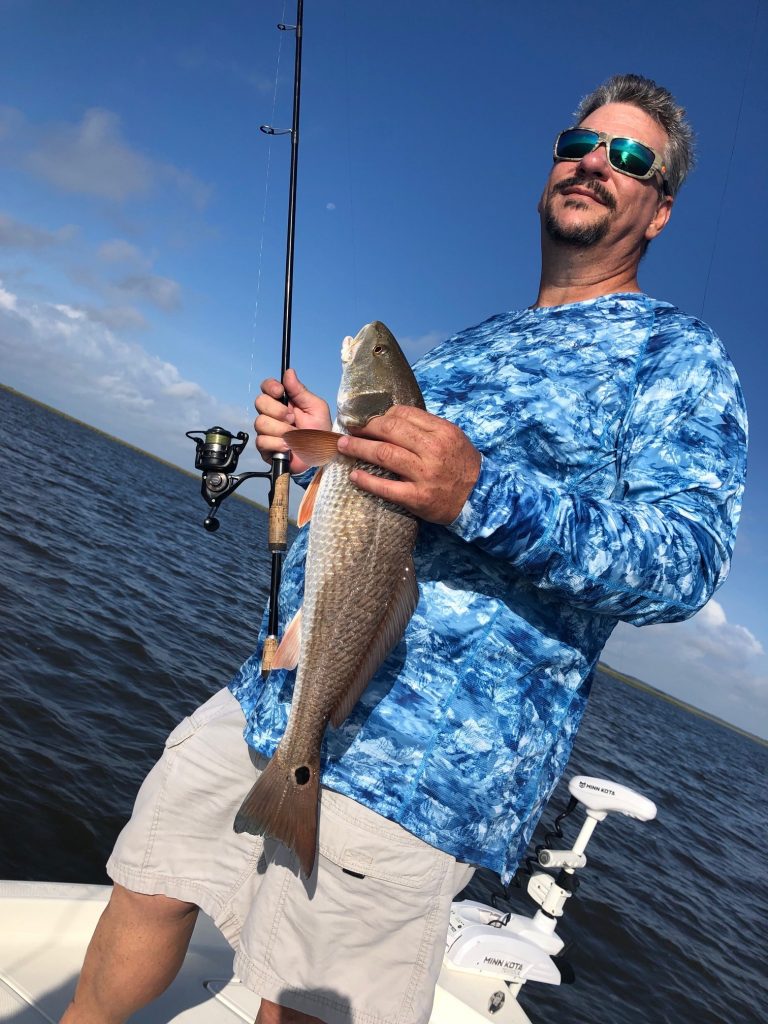 When you are thinking about how to catch redfish in the fall, it’s hard to beat the action on bull redfish at the mouth of Mobile Bay.

As you move down the banks and find one of the small features mentioned above, stop the boat and make several casts at the spot trying to figure how the fish would relate to it. For example, if the water is flowing out of a small drain, picture how the red would lie in ambush for a crab or shrimp to be swept out. Try to set that drift or cast up and more often than not, you’ll be successful at catching the reds.

On sunny days, try drifting along leeward banks with the sun behind you. The water is usually very clear in the early fall, and oftentimes you’ll be able to sight-cast to cruising reds. A few musts for sight casting are a good pair of polarized glasses, and some sort of raised platform on the bow. You’ll be amazed at how much better you’ll see by getting as little as 18” higher in the boat.

When you see a red, draw an imaginary three foot sided triangle with the fish’s eyes being the top point of the triangle and the base of the triangle being forward of the fish. That’s the area you’ll want to drag the bait through. So you’ll want to cast outside of it and start working the bait into the triangle so it looks natural when it reaches the strike zone. In other words, don’t hit the fish on the head when you cast!

October is usually a month of two different patterns yet one that most inshore anglers really look forward to. I hope that if you decide to give it a try a few of these pointers on how to fish for redfish and speckled trout will add to your success.

Capt. Bobby Abruscato
Captain Bobby Abruscato is out on the water catching fish and having fun year round. He is the owner and founder of A-Team Fishing Adventures with 40 years of experience fishing waters adjacent to Dauphin Island. Captain Bobby is the co-host of the very popular “Weekend Fishing Report”, a weekly, live radio fishing report.